The Best Emmy Award Auction is in Los Angeles at NateDSanders.com

FREE ESTIMATE. To buy, consign or sell in our Emmy auction aka Emmy Award Auction (if you have an Emmy award for sale), please contact [email protected], phone (310) 440-2982 or go to http://www.NateDSanders.com.

With 34 Oscars and hundreds of Emmys in our recent auctions, we’ve officially grasped the same statuettes in our hands that many Hollywood legends did the night they took home their awards. In December 2011, we auctioned the Oscar that Orson Welles won for “Citizen Kane” which sold for $861,542, in a record-breaking auction of 15 Oscars — the largest collection of Oscars ever sold — and which pulled in over 3 million dollars. Few can forget the famous opening line of Citizen Kane — that one simple dying word: “Rosebud” which Orson Welles penned himself in the original screenplay that won him this Academy Award for his original screenplay in 1942. 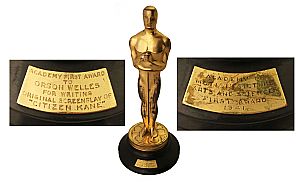 As the annual Primetime Emmys are set to air every September, we’re surpassing our 34 Oscar mark with hundreds of Emmys and counting in our auctions, just surpassing television legend Bob Barker’s 19 Emmy wins for “The Price Is Right.”

Awarded by the Academy of Television Arts and Sciences, the first Emmy Awards were presented on January 25, 1949 at the Hollywood Athletic Club, back when primetime television was such a new medium that only three TV shows and performers took home the famous statue and just six awards in total were presented. Back then, there were only one million TV sets in the United States in total, with television still finding its footing to become the dominant medium that it has today.

The design of the statue has remained tried and true, with the famous winged woman holding an atom. (The wings represent the muse of art; the atom the electron of science.) The TV Academy rejected a total of forty-seven proposals before settling on television engineer Louis McManus’ 1948 design, who used his wife as the model in the ultimate romantic gesture. 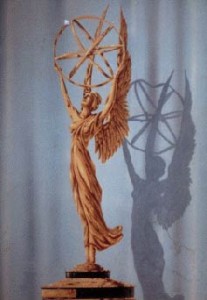 You always hear actors saying how the awards are “heavier than they look!” as they accept their awards. Carb-less fast-filled pre-award show diets aside, the actors are right. They are heavier than they look. Each statuette weighs in at just over six pounds and is made of copper, nickel, silver and gold, designed by the same company who manufactures the Oscars.

Nate D. Sanders Auctions has sold close to 100 Emmy awards over the past few years. The iconic trophy, a reward for excellence achieved in the television industry, makes for a striking addition to one’s collection or mantlepiece. The Emmy award was established by the Academy of Television Arts and Sciences at an awards show held at the Hollywood Athletic Club in 1949, but the event was originally intended as an award show for the television industry solely in Los Angeles. By the mid-1950s, the event was expanded to include programs broadcast in New York as well as the rest of the country. Based on the suggestion of Academy president Harry Lubcke, the award was originally called an “Immy”, named after the image orthicon tube, one of the tubes located inside of the television set at that time. The name “Emmy” eventually took hold, as it had a nicer ring to it. As far as the look of the trophy itself, there were 47 different models tried and discarded before they settled on the final design. We are very familiar with the look of this beautiful trophy, as we have seen many of them come our way over the past few years. Here are some notable Emmys we have sold: 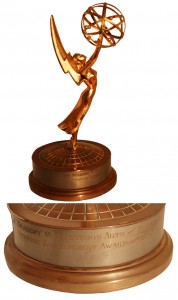 This beautiful and rare early Emmy award was awarded for station achievement in 1954. July 2012’s auction had three Emmys sold from popular television shows, with the Emmys for “The X-Files”, “Buffy The Vampire Slayer” and “Star Trek: Voyager” all being auctioned off. 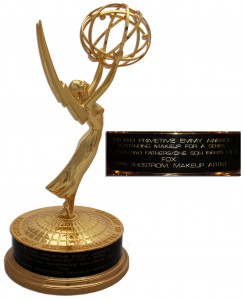 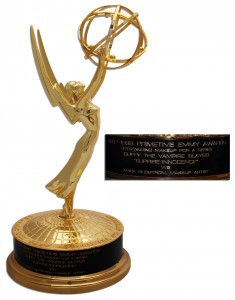 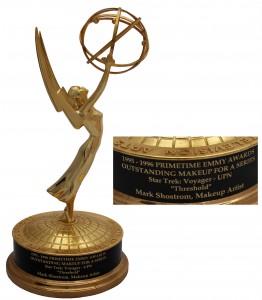 Live broadcasting of sporting events is an extremely difficult endeavor, one that takes a lot of skill. The Academy agreed, establishing a separate ceremony awarding Emmys related to the broadcasting of Sporting events. We have had the privilege of auctioning off several Emmys won for coverage of sports broadcasts. Starting with the 1988 Emmy for coverage of the Winter Olympics: 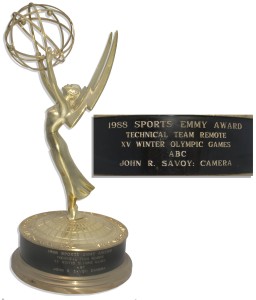 This Emmy was justly awarded to camera operator John Savoy, for his brave work during the 1989 Bay Area World Series, when an Earthquake struck during the telecast. 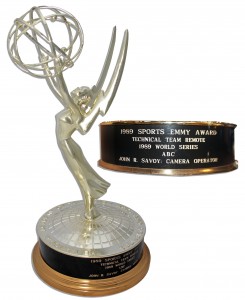 We also sold another Emmy from the broadcast of a World Series game, from the 1987 clash between the Minnesota Twins and St. Louis Cardinals: 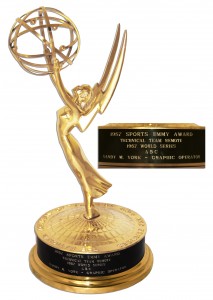 A 1987-1988 daytime Emmy Award was being auctioned for hairstylist Zora Sloan for Outstanding Achievement in hairstyling for the long-running NBC drama series “Days of Our Lives.”  Sold for $6,544.

And last but not least, Unbeknownst to many, the Emmys are split and awarded to various sectors of television production throughout the year — from sports to regional news broadcasting to technology and engineering. We had auctioned a rare 2002 Technical Award from the Technology & Engineering Emmys. It sold for $5,948.  Though the earners of the awards may not necessarily be in front of the camera, these awards honor individuals and companies whose technical innovations impact the physical process of broadcasting television.

We’ve sold hundreds of Emmys won by screen legends in every decade of television history including these Emmys at a former NateDSanders.com auction. Here’s a great example of an early Emmy Award for sale in our past auction,  a 1954 “Station Achievement” award statuette: 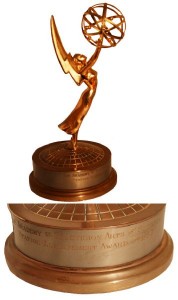 We were also more than thrilled to have a 1957 Emmy for sale at auction awarded to long-time television personality Dinah Shore as host of ”The Dinah Shore Chevy Show” for ”Best Musical, Variety, Audience Participation or Quiz Series”. (Click on photo or hyperlink) 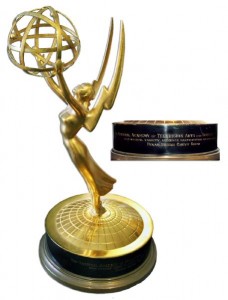 The wildly popular variety show became a spin-off of her original ”Dinah Shore Show” as Chevrolet Motor Division became the sponsor. The show aired from 1956-1963 as a live broadcast in NBC’s famed ”living color,” with the signature ”See the U.S.A. in Your Chevrolet” theme song sung by Shore. Shore performed alongside legends like Ella Fitzgerald, Mahalia Jackson, Peggy Lee, Frank Sinatra, Pearl Bailey and many more. 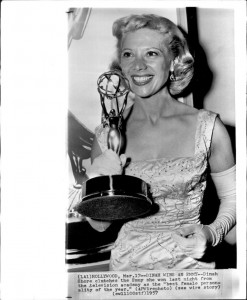 Check out our latest Emmys, get your acceptance speeches ready and let the red carpets roll… 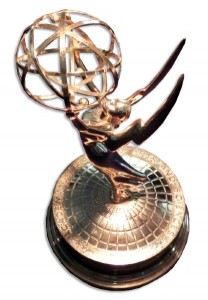