FREE APPRAISAL for your Alice in Wonderland Cel at Nate D. Sanders Auctions

Alice in Wonderland is an animated musical film that was released by Walt Disney in 1951.  The film was based on the books by Lewis Carroll.  When initially released, the film was considered a flop until Disney aired it on television as one of the first episodes of the TV series Disneyland.  It was a hit on television and was eventually re-released in theaters and this time, it was extremely successful.  Today, it is regarded as one of Disney’s finest animated classic films.  Original hand-inked, hand-painted cels used in the production of the original Walt Disney Alice in Wonderland film are always in great demand.  We get fantastic prices for Alice in Wonderland cel animation art items.  For example:

Ray Bradbury’s personally owned “Alice in Wonderland” Disney animation cel. Art from the classic 1951 film features a wide-eyed Alice encountering the living pair of eyeglasses. Hand-painted characters are cut out precisely and mounted to an illustrated background. Alice measures 4.5″ x 5.25″. Glasses measure 5.5″ x 4″. Background measures 13″ x 11″, matted to an overall size of 19″ x 18″. Toning to mat and a small smudge to Alice’s cheek, else near fine. With Disney COA stamp to right corner and Disney COA sticker to verso. With a COA from the Ray Bradbury estate. Sold for $8,319. 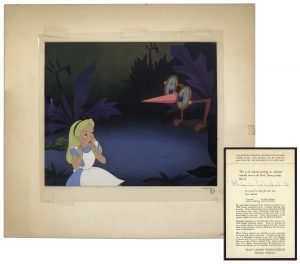 Auction an Alice in Wonderland cel

Sell an Alice in Wonderland cel