FREE APPRAISAL.  To appraise, auction, buy, consign or sell your Hiroshima newspaper that is for sale, please email Nate@NateDSanders.com or contact Nate D. Sanders at (310) 440-2982. We will also grant you a high reserve which no other auction house will let you do.

At Nate D. Sanders Auctions we sold the following Hiroshima newspaper for $1,954. Here is the description:

7 August 1945 “New York Times” announcing “First Atomic Bomb Dropped on Japan” in a 2″ high headline. Printed the day after the bomb was dropped on Hiroshima, the history-altering event unfolds in myriad articles. Headlines include “New Age Ushered”, “‘Impenetrable’ Cloud of Dust Hides City After Single Bomb Strikes”, “Atom Bombs Made in 3 Hidden ‘Cities'” and “Steel Tower ‘Vaporized’ In Trial of Mighty Bomb”. Section one only, runs 38pp. and measures 16.5″ x 22.5″. Toning, some chipping at edges and paper loss at seam. Very good. Sold for $1,954.

We have sold many newspapers covering significant events from the past, including this one:

Colonial Newspaper From 1774 With Exceptional Coverage on the Boston Tea Party — ”…Monday evening the tea that arrived in Captain Gorham, from London…was thrown into the sea…”

Rare colonial newspaper with content on the Boston Tea Party and a second seizure and dumping of tea that occurred on 7 March 1774. Little is known of this second Tea Party except what has been recorded in a few colonial newspapers, such as this one, and by John Adams who wrote about it in his diary. In this 17 March 1774 edition of ”Rivington’s New-York Gazetteer” (also called the ”Connecticut, Hudson’s River, New-Jersey, and Quebec Weekly Advertiser”), London’s response to the first Boston Tea Party is discussed, as well as details of the second Tea Party aboard the ship of Captain Gorham.

The paper goes onto discuss possible replacements of politicians and also the removal of Peter Oliver, Chief Justice of the Superior Court of Massachusetts Bay, whose salary was dependent upon the taxes levied against the Colonies from tea. The reporting continues, ”…Monday evening [7 March 1774] the tea that arrived in Captain Gorham, from London, belonging to some private persons, was thrown into the sea, in the same manner with that of the East India Company in December last [16 December 1773]…” Coverage appears on the second page of 4pp. paper, measuring 11.25” x 18.25”. Light toning and reinforced fold, otherwise in near fine condition given age. Very rare reporting on the second Tea Party and the beginning of the oppressive measures taken against the colonies as a result. Sold for $3,125. 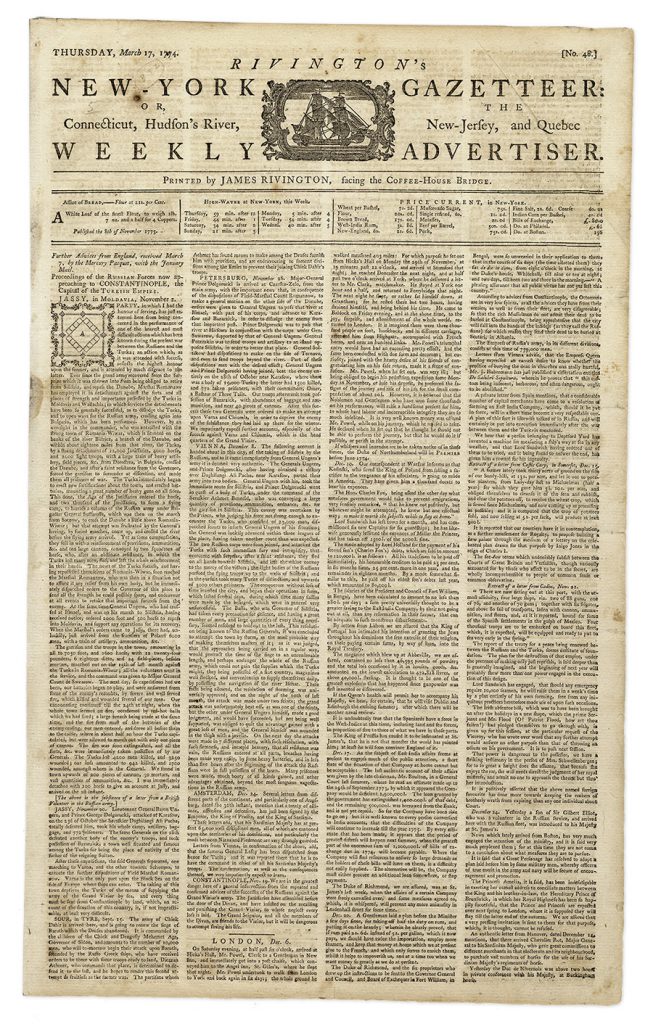 NO OBLIGATION, FREE VALUATION.  To appraise, auction, buy, consign or sell your Hiroshima newspaper that is for sale, please email Nate@NateDSanders.com or contact Nate D. Sanders at (310) 440-2982.  We will also grant you a high reserve which no other auction house will let you do.