Sell Your The Right Stuff Memorabilia for up to $50,000 or More at Nate D. Sanders Auctions

FREE APPRAISAL.  To appraise, auction, buy, consign or sell your The Right Stuff memorabilia that is for sale for up to $50,000 or more, please email Nate@NateDSanders.com or contact Nate D. Sanders at (310) 440-2982. We will also grant you a high reserve which no other auction house will let you do.  Free FedEx pickup, free insurance and free FedEx shipping from Europe to our auction house in Los Angeles.  Interest-free cash advances are also available.

Sell Your The Right Stuff Memorabilia

One-of-kind piece of space history flown with John Glenn aboard the Mercury-Atlas 6 “Friendship 7” – the first manned orbit of the earth by an American astronaut. These in-flight photo instructions were used by Glenn aboard the 20 February 1962 mission and feature both a chronological flight plan with detailed astrological markers (“+7′ CASSIOPIA/COUNT STARTS” and “+23′ ORION & MOON/UV PHOTOS COUNT STARS”), as well as fixed geographical landmarks (“LAKE VICTORIA/KENYA NAIROBI” AND “CHRISTMAS ISLANDS”). All data on the instructions was personally used by Glenn to confirm the capsule’s flight path during its 4 hour and 55 minute mission, instructing Glenn at which point to take photos in flight. Instructions also include an in-flight check list that covers such tasks as “Chng Film-Color Filter Out” and “STOW & R. SEQ CHK CET”. The document was attached to a bobbin at each end, forming a scroll that Glenn was able to move back and forth with his thumb during the mission. The long and narrow document measures 4.75″ x 42.5″, its ends trimmed to fit into the bobbin slits. The in-flight instructions were given by Glenn to Frogman Richard “Dick” Dunham of UDT-21 (Underwater Demolition Team) as a thank you memento for his work with Mercury 6; a precursor to Navy Seals, the UDT both trained astronauts for egress from the space capsule into the ocean and retrieved the astronauts after splashdown. The flight plan was then given to U.S. Navy veteran Justin C. Pollard by Dunham, who became a mentor during Pollard’s time in the Navy Bud/S School, Class 240. The document’s historical significance was confirmed by the John Glenn Archives at Ohio State University Libraries. Light creasing and wear, otherwise near fine. Additional provenance includes: (1) LOA from Justin Pollard; (2) 1959 photo of Dunham and Glenn together (Dunham is the blond gentleman, 4th from left in back row) and (3) screen-capture photo of the Mercury 6 cockpit, scroll visible in center of photo, in front of John Glenn.  Sold for $66,993. 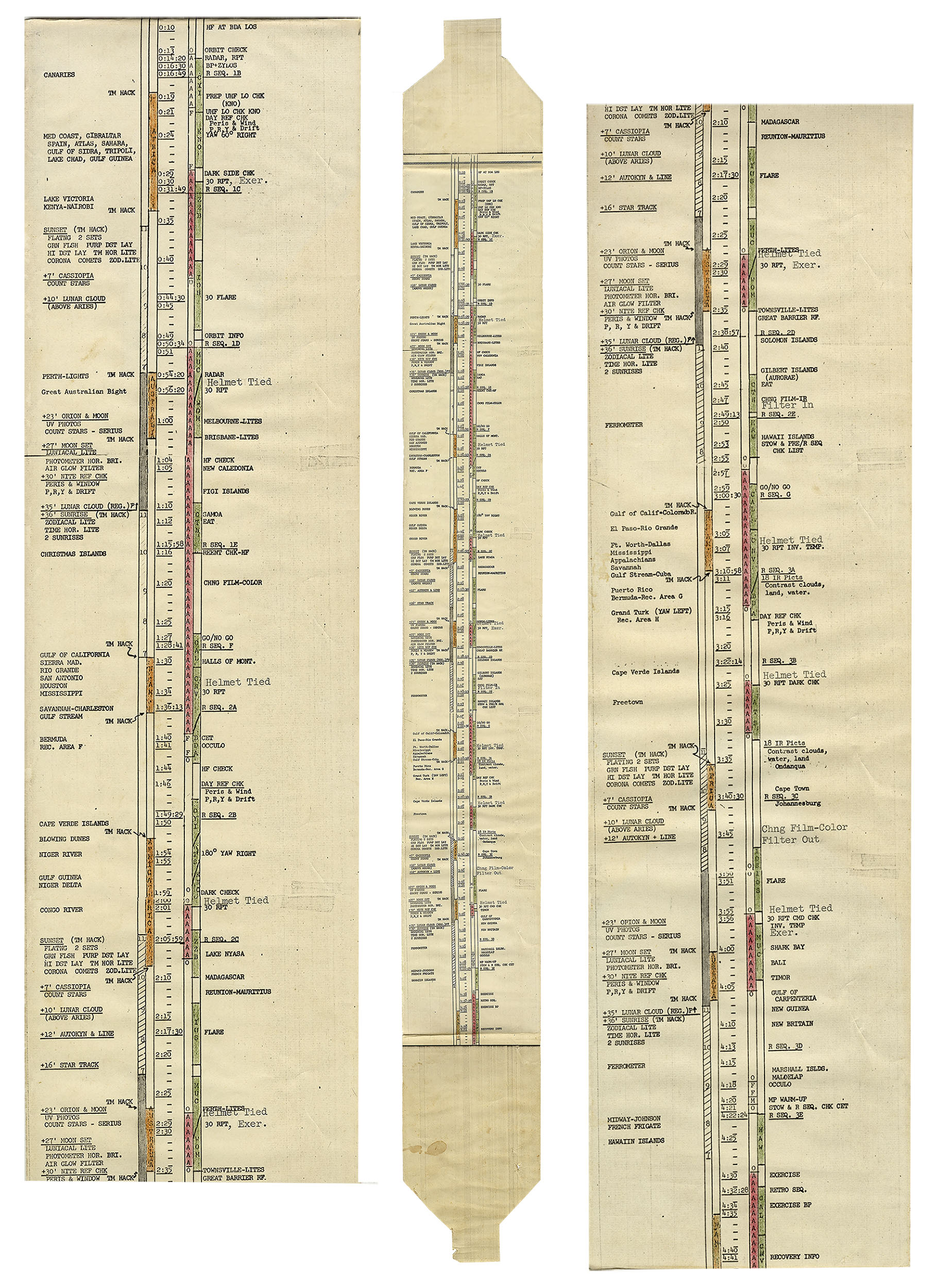 We also sold the following movie memorabilia from Batman Returns:

The Batsuit from Tim Burton’s hit superhero film starring Michael Keaton, “Batman Returns” which smashed box office records when it opened in 1992. Body of batsuit is in formed black rubber segments covered by the textured integral cape and cowl style mask, with long black leather gloves, boots and gold plastic belt and bat symbol. Original parts of the costume from the film are the cowl, cape and body; the gloves, belt, insignia and shoes are replicas for the display. Costume comes displayed dramatically on a mannequin with chiseled face of Keaton, mounted to a 2′ square gray-white base with ”BATMAN RETURNS” at front center. Batsuit measures 6’5” tall and approximately 27” at the widest point of the cape. Some glue present where cape and cowl meet, overall very good condition. Sold for $41,250.

We also sold Mercury 7 (like in the film) memorabilia:

Mercury 7 signed photo display. NASA’s original 7-member crew poses here at the Space Task Group offices at Langley Field in Virginia in January of 1960. Photo was commissioned by the National Geographic Society and features a copyright beneath photo, as well as a National Geographic stamp to verso. Signatures from left to right include: ”John Glenn, Jr.”, ”Deke Slayton”, ”Scott Carpenter”, ”Gus Grissom”, ”Wally Schirra”, ”Alan B. Shepard, Jr.” and ”Gordon Cooper”, in black and blue ink. Photo measures 18” x 8.25” and is matted to an overall size of 21” x 11.75”. Very minor foxing to edge of mat, else fine condition. With provenance from Dean Conger, a National Geographic photographer who took this photo. Sold for $5,600. 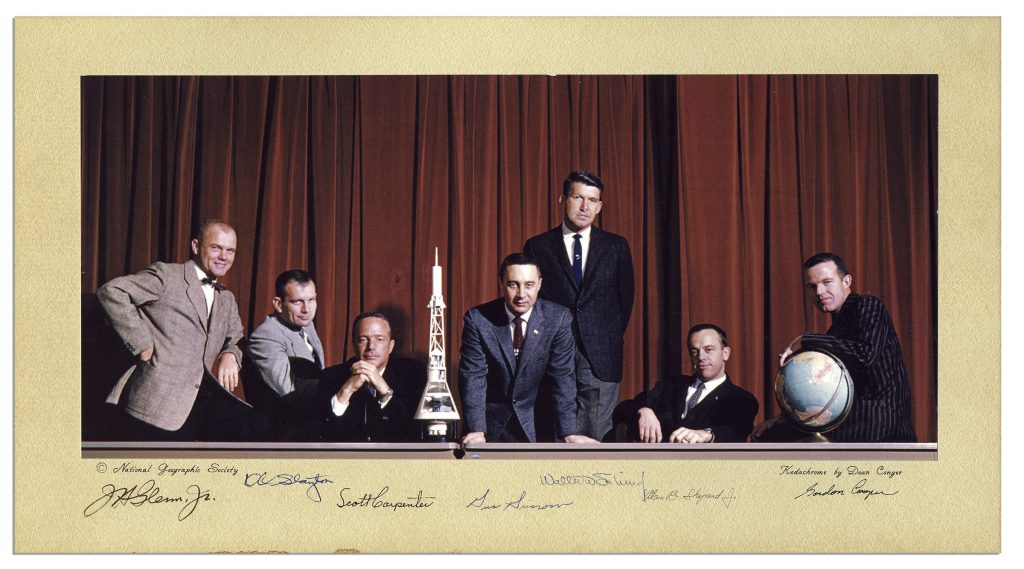 Before the successful film, came the book. We at NateDSanders.com Auctions have sold the following Tom Wolfe signed first edition of ”The Right Stuff”:

Tom Wolfe Signed First Printing of ”The Right Stuff”, His Landmark Book on the Mercury 7

Tom Wolfe signed first edition, first printing of ”The Right Stuff”. New York: Farrar, Straus and Giroux, 1979, with ”First printing, 1979” on copyright page as required. Signed ”To Steven Mitnick / Tom Wolfe” on the title page. In this lively biography, Wolfe profiles the Mercury 7 astronauts and attempts to answer, as he put it, what ”makes a man willing to sit up on top of an enormous Roman candle…and wait for someone to light the fuse”. ”The Right Stuff” is Wolfe’s most successful book and was adapted into the Academy Award-winning 1983 film. Book measures 5.75” x 8.5”. Light soiling to grey boards and endpapers, overall in very good condition. Dust jacket with $12.95 price intact is very good to near fine. Sold for $250. 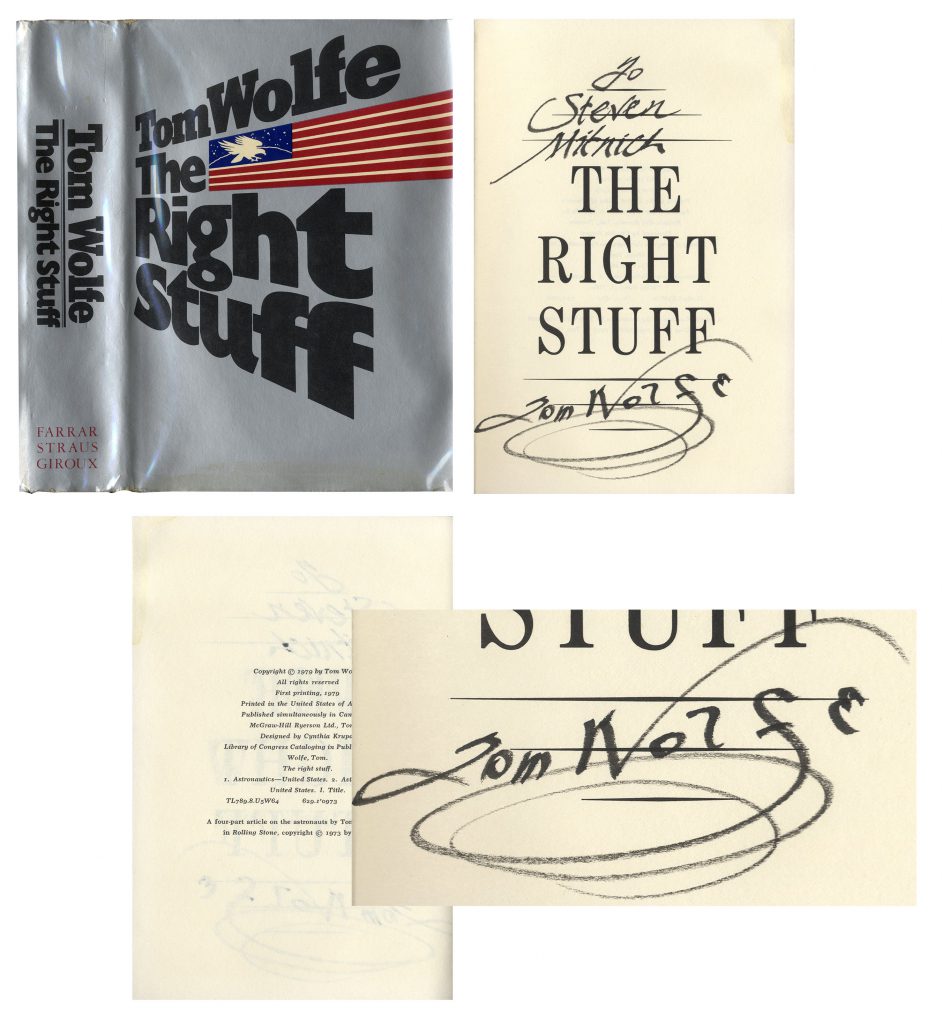 Tom Wolfe Signed First Printing of ”The Right Stuff”, His Landmark Book on the Mercury 7

NO OBLIGATION, FREE VALUATION.  To appraise, auction, buy, consign or sell your The Right Stuff memorabilia that is for sale for up to $50,000 or more, please email Nate@NateDSanders.com or contact Nate D. Sanders at (310) 440-2982.  We will also grant you a high reserve which no other auction house will let you do.  Free FedEx pickup, free insurance and free FedEx shipping from Europe to our auction house in Los Angeles.  Interest-free cash advances are also available.

Nate D. Sanders offers the following services for your The Right Stuff memorabilia: