Auction or Sell a JEB Stuart Autograph for up to $40,000 or More at Nate D. Sanders Auctions

Here is a recent price realized for a JEB Stuart autograph, or James Ewell Brown Stuart as he is formally known, and we can obtain up to this price for you or more:

Confederate General J.E.B. Stuart Civil War dated endorsement signed. Civil War document relating to Confederate soldier Samuel Gibson’s efforts to obtain a substitute bears four signatures including that of General Stuart. Composed at “Hdqrs. Cav. Div. A.N.V” and signed on 15 August 1863, Stuart notes that he believes the substitute for Samuel Gibson is invalid because the substitute himself is exempt from military service. He goes on to include his reasons for the invalidity of the substitute and finally recommends that Gibson be returned to service. Boldly signed, “J.E.B. Stuart, Major Gen’l.” Additionally signed by Adjutant W.H. Taylor who notes that the substitute is “clearly illegal.” The matter was later submitted to the Secretary of War and signed by Confederate officials, H.L. Clay and J.A. Campbell who cite Order No. 47 in which “unnaturalized foreigners” are not permitted to serve as substitutes. The case was then submitted to the Chief of the Bureau of Conscription and signed by 1st Lieutenant Goldthwaite. Samuel Gibson was ultimately ordered to return to duty. Document measures approximately 8″ x 10″. Creasing and overall toning and wear, else good condition. Sold for $5,100. 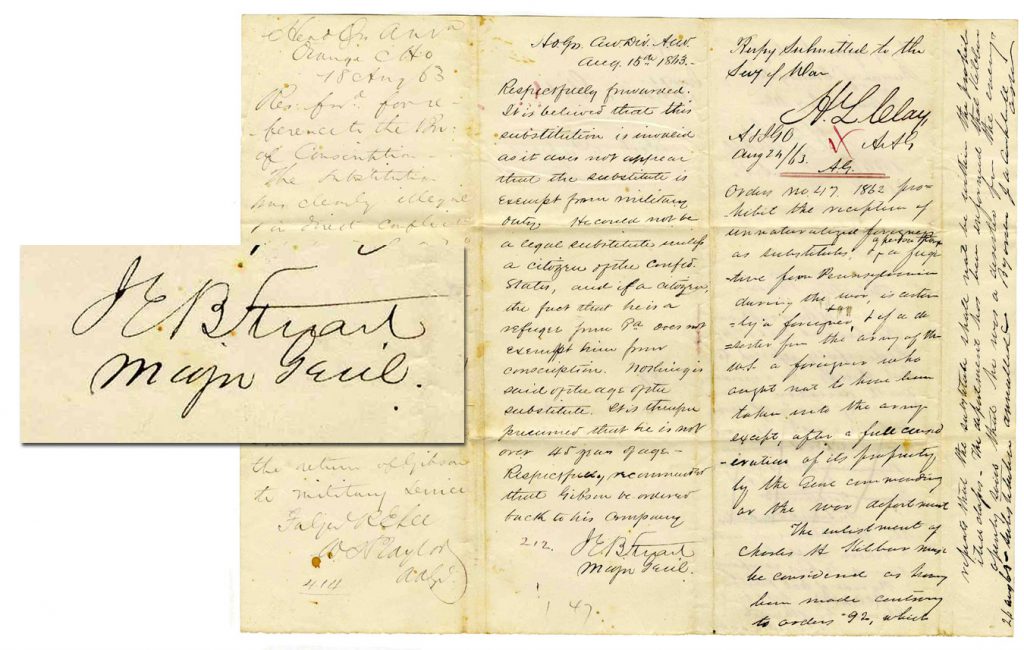 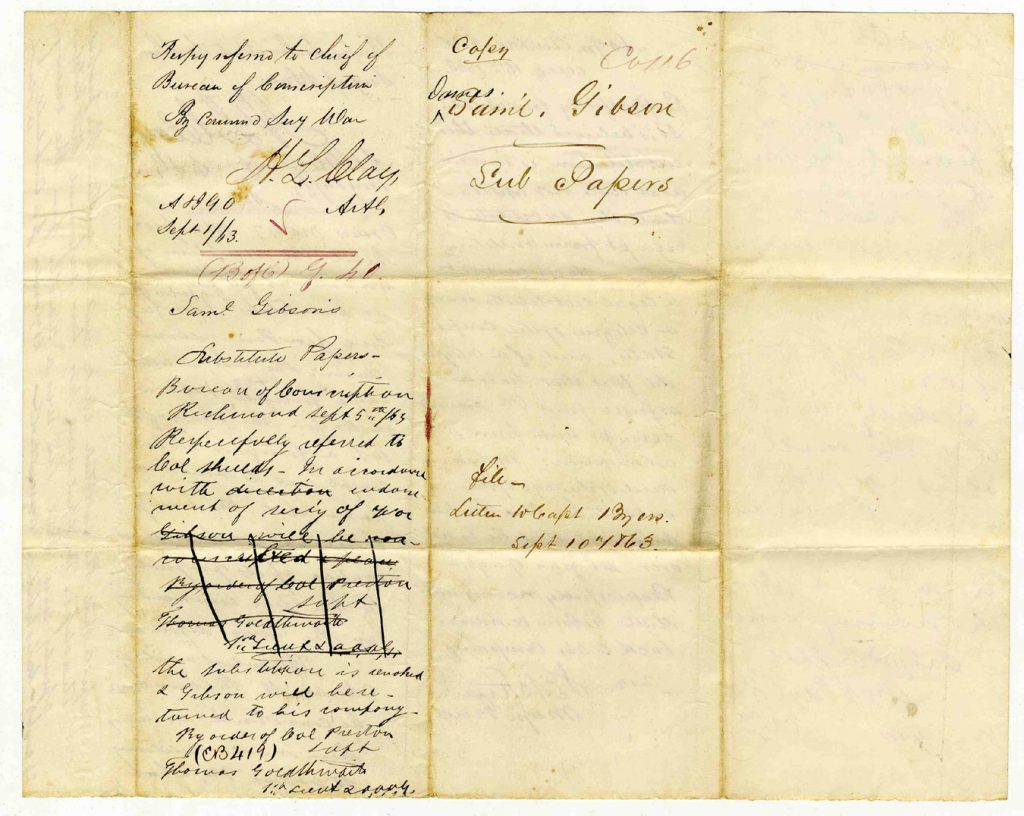 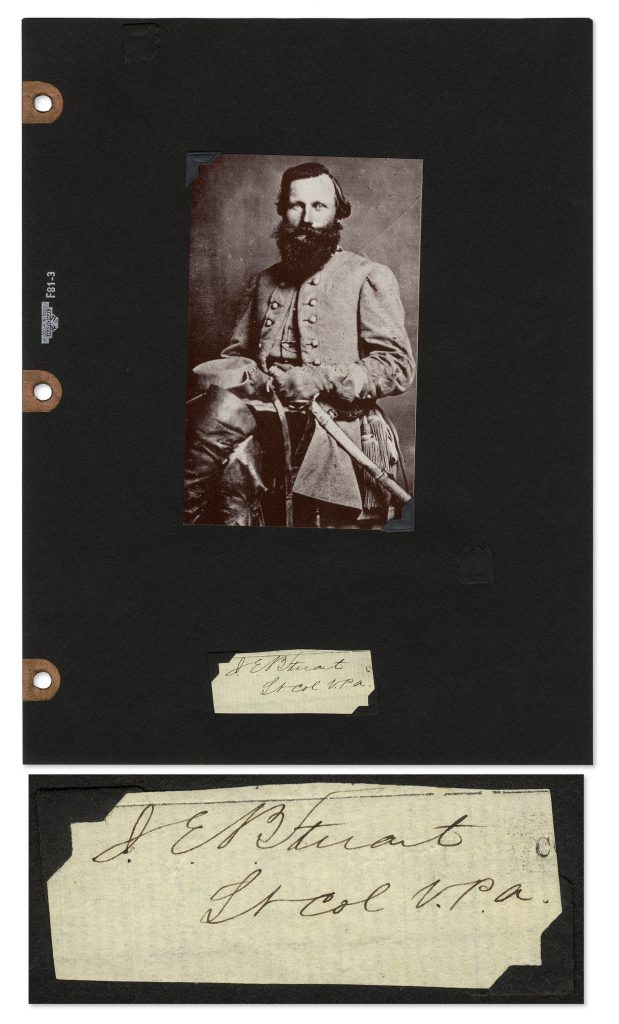 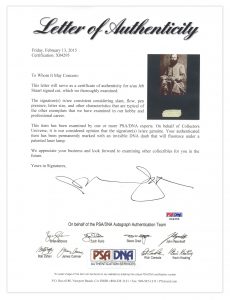 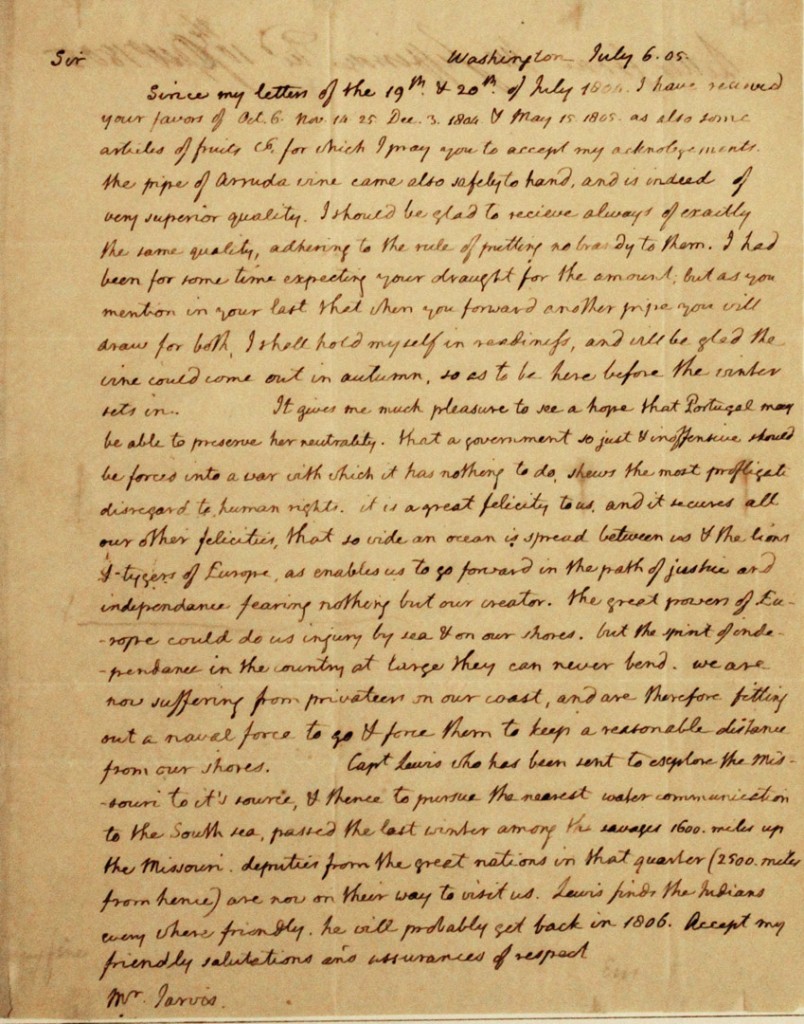 Here is the full description of the Thomas Jefferson letter:

Exceptional, museum-worthy report, handwritten by Thomas Jefferson letter as President, regarding the Lewis and Clark Expedition. Letter is addressed to William Jarvis of the U.S. consul in Lisbon, Portugal, dated 6 July 1805, describing the historic expedition that Jefferson authorized during his Presidency. In its entirety: “Sir / Since my letters of the 19th & 20th of July 1804 I have received your favors of Oct. 6 Nov. 14-25 Dec. 3 1806 & May 15 1805. As also some articles of fruits & for which I may you accept my acknowledgments. The pipe of Arruda vine came also safely to hand, and is indeed of very superior quality. I should be glad to receive always of exactly the same quality, adhering to the rule of putting no brandy to them. I had been for some time expecting your draught [draft] for the amount; but as you mention in your last that when you forward another pipe you will draw for both, I shall hold myself in readiness, and will be glad the vine would come out in autumn, so as to be here before the winter sets in. It gives me much pleasure to see a hope that Portugal may be able to preserve her neutrality.

That a government so just & inoffensive should be forced into a war with which it has nothing to do shows the most profligate disregard to human rights. It is a great felicity to us and it secures all our other felicities, that so wide an ocean is spread between us & the lions & tygers of Europe, as enables us to go forward in the path of justice and independence fearing nothing but our creator. The great powers of Europe could do us injury by sea & on our shores. But the spirit of independence in the country at large they can never bend. We are now suffering from privateers on our coast, and are therefore fitting out a naval force to go & force them to keep a reasonable distance from our shores. Capt. Lewis who has been sent to explore the Missouri to its source & thence to pursue the nearest water communication to the South sea, passed the last winter among the savages 1600 miles up the Missouri. Deputies from the great nations in that quarter (2500 miles from hence) are now on their way to visit us.

Lewis finds the Indians every where friendly. He will probably set back in 1806. Receipt my friendly salutations and assurances of respect.” Document measures 8″ x 10″ on two pages, with integral fly-leaf addressed to Jarvis in the hand of Jefferson’s secretary. Toning and folds throughout, with minor tape residue at top and a tiny chip at lower right corner. Near fine condition with bold, legible handwriting. An important piece of handwritten history by the President who commissioned America’s greatest exploration adventure. ADDITIONAL INFORMATION: A near exact copy of this letter resides in the Library of Congress’ Thomas Jefferson Papers. One of the two letters was produced by Jefferson’s polygraph machine (used from 1804 until his death), which provided an immediate copy of his handwritten letters. Though impossible to determine which copy was produced by the pen that Jefferson held, Jefferson typically kept the machine-produced letter as a copy for himself. Since this letter was mailed to William Jarvis (unlike the letter in the LOC), it’s probable that this letter was the one handwritten by Jefferson.