Auction or Sell a William Butler Yeats Autograph for up to $5,000 at Nate D. Sanders

Herewith are recent auction prices realized for a William Butler Yeats autograph and we can obtain up to these prices for you or more at Nate D. Sanders:

An original William Butler Yeats autograph on a photo sold for almost $5,000

An original William Butler Yeats autograph on a letter in 1897 sold for almost $3,000

An original William Butler Yeats autograph on a book sold for almost $2,000

“The Poems of W.B. Yeats. The Definitive Edition in Two Volumes.” London: Macmillan: 1949. One of only 300 limited edition copies signed by the author and printed on Glastonbury Ivory Toned Antique Laid paper. Two volume set bound in olive green buckram boards and housed in original slipcase. Yeats spent the final years of his life revising the text of this volume of poems, of which he had corrected the proofs and signed the special page to appear at the beginning of volume one. With his death in 1939 and the outbreak of the war later that year, Macmillan shelved the project and did not issue this signed limited edition until 1949. Volume One includes: “The Wanderings of Oisin,” “Crossways,” “The Rose,” “The Wind Among the Reeds,” “The Old Age of Queen Maeve,” Baile and Aillinn,” “In the Seven Woods,” “The Shadowy Waters,” and others. Volume Two includes: “The Wild Swans at Coole,” “Michael Roberts and the Dances,” “The Tower,” “The Winding Stair and other Poems,” “A Full Moon in March,” and “Last Poems.” Fading to backstrips. Slipcase shows wears in the form of bumped corners and worn edges. Covering to slipcase coming loose in several areas. Overall, a handsome set in very good condition. Sold for $2,279. 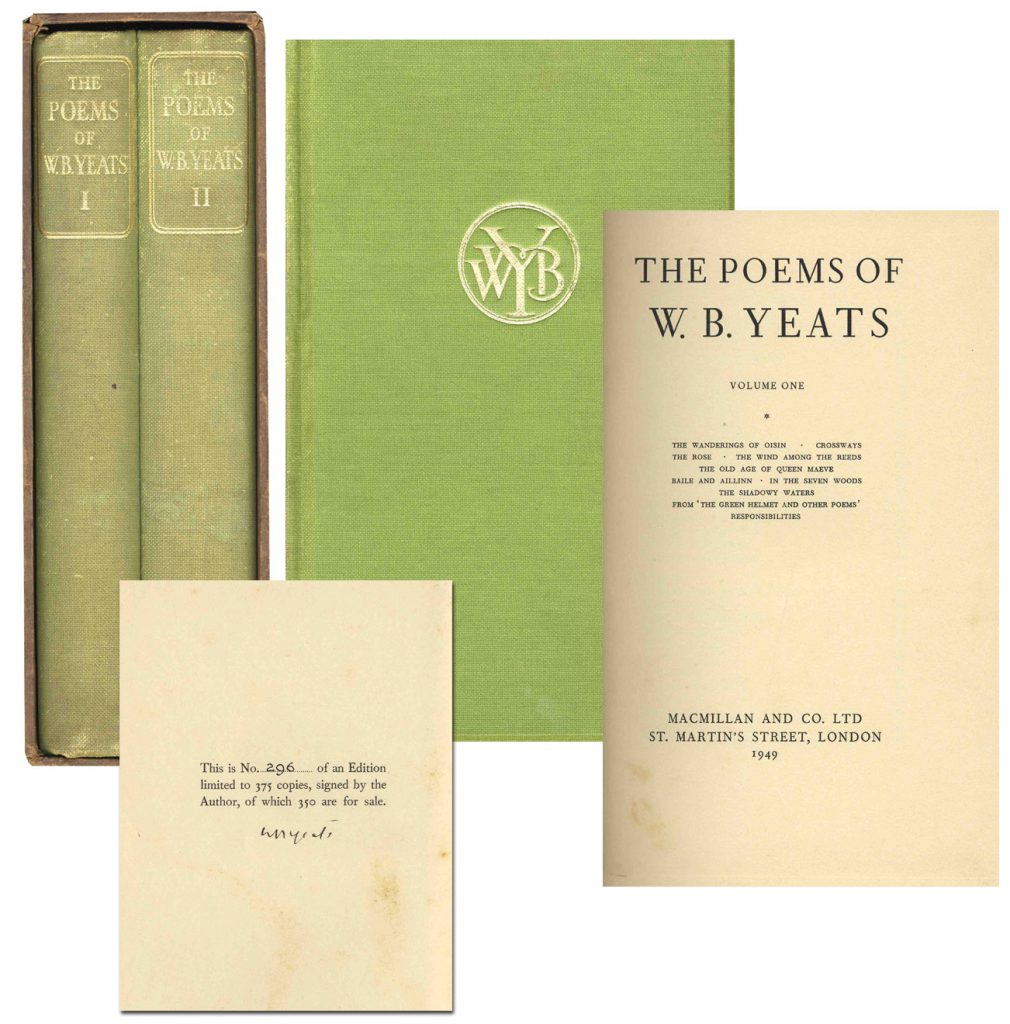 Signed limited first edition of William Butler Yeats’ “The Variorum Edition of the Poems of W.B. Yeats.” New York: Macmillan, 1957. Bound in publishers red and tan cloth with original slipcase. As was often the case with popular authors, Yeats signed his name to a number of specially printed sheets to be tipped into publications after his death. This is #306 of 825 such copies signed by Yeats. Few poets revised as frequently or extensively as did Yeats; this volume contains variant wordings from a wide range of his published works. Fine condition. Sold for $1,883. 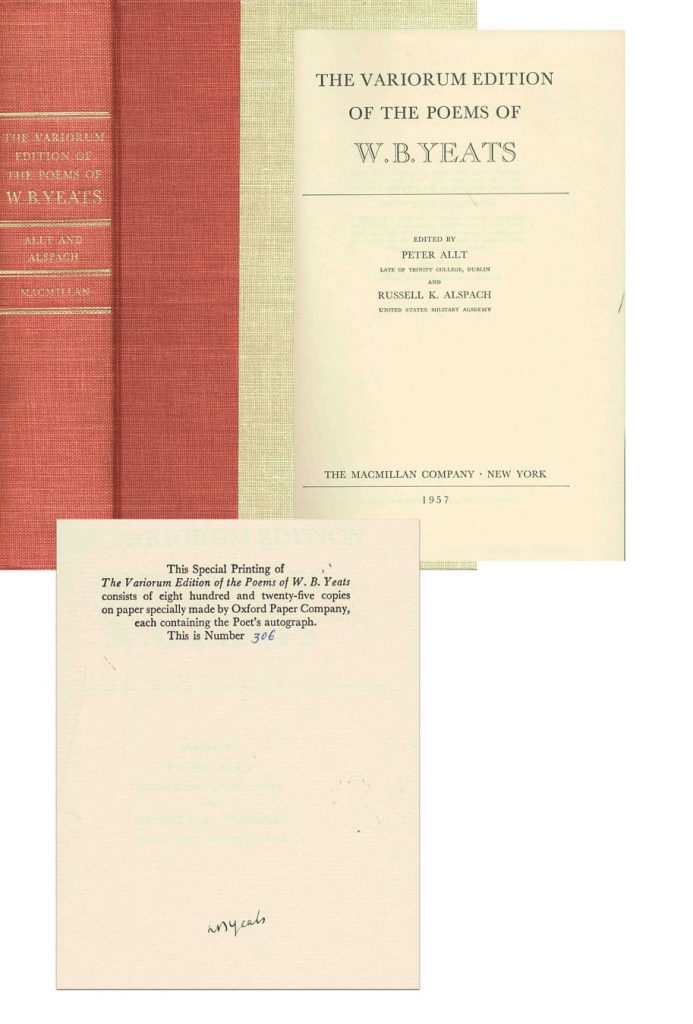 Scarce signed first edition of W.B. Yeats’ esoteric work “A Vision.” Publisher T. Werner Laurie, LTD: London: 1925: 256pp. measuring 6″ x 9.25″. Signed on the limited edition page indicating this copy as No. 18 of the 600 published. Yeats spent an extraordinary ten years in the research and writing of this book and felt that the poetry he wrote afterward was significantly informed by his studies for it. He writes here, “…I wished for a system of thought that would leave my imagination free to create as it chose…” Sage green hardcover with plain dustjacket with chipping along top spine, very slight foxing along edges of pages throughout. Very good condition. Sold for $1,712. 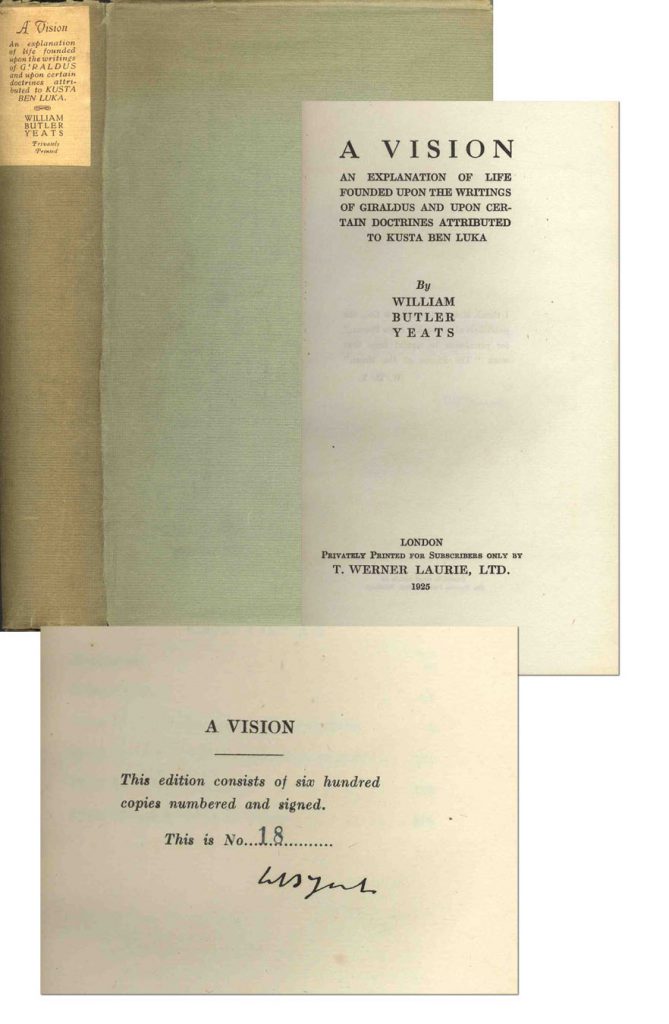 Very scarce carte-de-visite photograph of Charles Dickens with his Charles Dickens autograph upon the lower margin with his usual paraph emphasizing the signature, and again signed upon the verso. Photograph, circa early 1860’s shortly after the publication of “Great Expectations,” is by the photography studio of John & Charles Watkins, with the backstamp showing their 34 Parliament Street address. Photograph captures a somewhat disheveled Dickens in a contrast of both casual and formal attire, standing by an ornate table. It was during Dickens’ lifetime that photography became accessible to most people, although the ability to sign a photograph, such as this, wasn’t available until the invention of the carte-de-visite printed upon paper. The CDV format became popular during the 1860’s, just years before Dickens’ death in 1870. As a result, this signed photograph by Dickens came at a brief intersection of the author’s life and growing photo technology, making it very scarce. CDV measures 2.5″ x 4″. In very good condition with light soiling.  Dark Charles Dickens autograph.  Sold for $10,251.86. 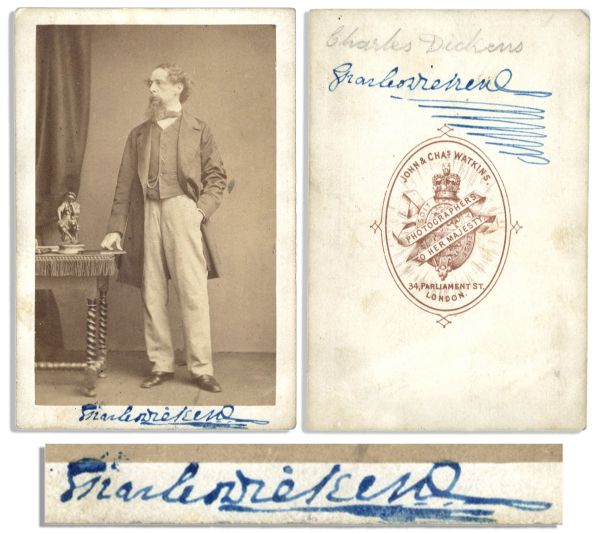 Charles Dickens Autograph Letter Signed From 1854 — ”…The result of the night is very gratifying indeed, and fills me with pleasure…”

Charles Dickens autograph letter signed from 1854, shortly after writing ”Hard Times”. Dickens writes from Tavistock House in London on 23 December 1854, writing ”Dear sir, Let me amuse you that your explanation was not at all necessary. I fully understood that you had a great deal to do, and never for a moment accused you in my thoughts of the slightest omission. The result of the night is very gratifying indeed, and fills me with pleasure. There is no hope of Sir towards Dalmer Lytton. He told me only the other day, that he was quite bewildered by such applications, and that where a speech hanging on him was to cast a shadow on his daily life. We resolve of never to ask any such service of each other and your letter binds me for the first time what I promise.” Dickens signs ”Faithfully yours / Charles Dickens” with his ornate paraph to second page of 2pp. letter on two sheets. Matted to blue background underneath brown wooden frame with engraving of Dickens. Letter measures 4.25” x 6.5”, framed to 20.25” x 26”. Light soiling to bottom of second page of letter, and very small tears to top of each sheet. Very good condition overall.  Bold Charles Dickens autograph.  Sold for $3,781. 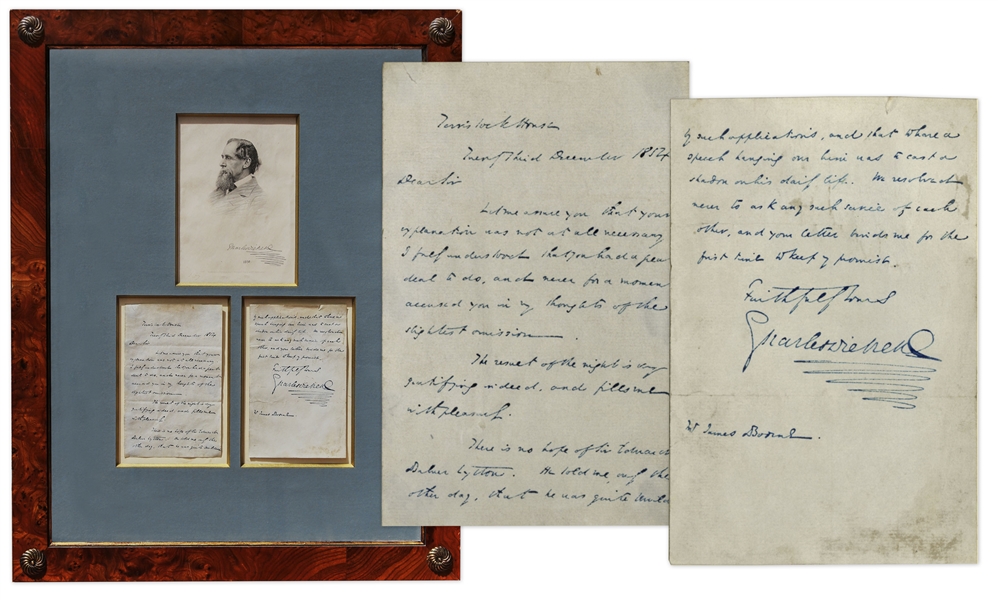 Charles Dickens Autograph Letter Signed From 1854 — ”…The result of the night is very gratifying indeed, and fills me with pleasure…”

To auction, buy, consign or sell your William Butler Yeats autograph that is for sale, please email [email protected] or phone the Nate D. Sanders Auctions (http://www.NateDSanders.com) office for a FREE ESTIMATE at (310) 440-2982.

We offer the following services for your William Butler Yeats autograph: