Sell or Auction Your 1955 Brooklyn Dodgers World Series Ring for up to $60,000 or More at Nate D. Sanders

NO COST, NO OBLIGATION APPRAISAL.  Appraise, auction, authenticate, buy or sell your item, please send your photos and description to Nate@NateDSanders.com, of Nate D. Sanders Auctions (http://www.NateDSanders.com). Top dollar procured for your item.

Here are auction prices realized for original Brooklyn Dodgers World Series rings and we can get up to $60,000 for you or more at our auction house, Nate D. Sanders Auctions (http://www.NateDSanders.com):

Here is an item we here at Nate D. Sanders have sold in the past:

The Brooklyn Dodgers were a Major League baseball team, active primarily in the National League (founded 1876) from 1884 until 1957, after which the club moved to Los Angeles, California, where it continues its history as the Los Angeles Dodgers. The team moved west at the same time as its longtime rivals, the New York Giants, also in the National League, relocated to San Francisco in northern California as the San Francisco Giants. The team’s name derived from the reputed skill of Brooklyn residents at evading the city’s trolley streetcar network. The Dodgers played in two stadiums in South Brooklyn, each named Washington Park, and at Eastern Park in the neighborhood of Brownsville before moving to Ebbets Field in the neighborhood of Flatbush in 1913. The team is noted for signing Jackie Robinson in 1947 as the first black player in the modern major leagues.

1955 Brooklyn Dodgers World Series replacement ring featuring a diamond at center, owned by Stephen W. Mulvey, whose family co-owned the Dodgers from 1912-1975. 1955 would be the singular World Series championship of the Brooklyn Dodgers, who beat their cross-town rival, the Yankees in the spectacular 7-game showdown, finally securing baseball’s ultimate crown. Not only was this the first and only win by the Dodgers in Brooklyn, it was the first time in MLB history that a team would come back to win the World Series after losing the first two games. Ring is engraved ”HJ 14K” to inner band, indicating it’s from sometime after 1980 when the jeweler Dieges & Clust was sold to Herff Jones. Otherwise it’s looks exactly as the original 1955 ring, cast in 14K white gold with a round-cut diamond at center, set against a Dodgers-blue stone, encircled by ”Brooklyn World Champions”. Right shank features a globe with ”Dodgers” written over it, and ”First / 1955”. Left shank reads ”B” with Mulvey’s name over a baseball. Ring size is 11.75. Near fine condition. Consigned directly from the Mulvey family. Sold for $6,250. 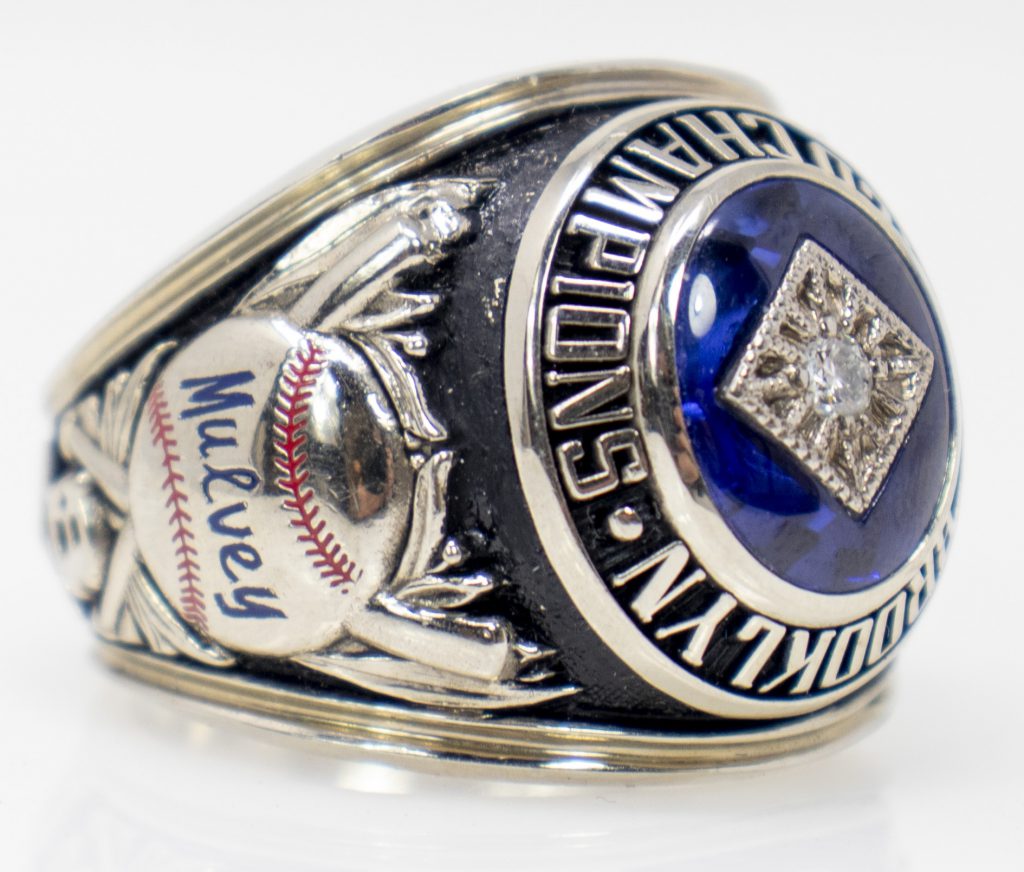 FREE APPRAISAL. Appraise, auction, authenticate, buy or sell your item for up to $60,000 or more, please send your photos and description to Nate@NateDSanders.com, of Nate D. Sanders Auctions (http://www.NateDSanders.com).