A record 15 Academy Award statuettes will be sold to the highest bidders during an online and telephone sale conducted by a Brentwood auction house, Nate D. Sanders Auctions. It’s being condemned by the Academy of Motion Picture Arts and Sciences, which guards ownership of the golden trophies. 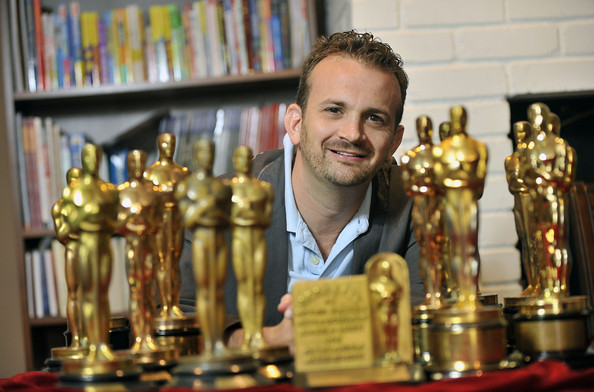 Nate D. Sanders displays the collection of Oscar statuettes that his auction company will sell online to the highest bidder.

Don’t worry if you’re one of the 100 or so Academy Award nominees who will go home empty-handed Sunday night.

On Tuesday, you’ll be able to buy yourself an Oscar.

A record 15 Oscar statuettes will be sold to the highest bidders during an online and telephone sale conducted by a Brentwood auction house, Nate D. Sanders Auctions (www.natedsanders.com).

The sale of the statuettes, which include those awarded for such classics as “Citizen Kane,” “How Green Was My Valley” and “Wuthering Heights,” is expected to generate as much as $4 million in bids, according to auctioneer Nate D. Sanders.

The auction is being condemned by the Academy of Motion Picture Arts and Sciences, which jealously guards ownership of the golden trophies and use of the name “Oscar.”

All 15 statuettes now up for sale were awarded before 1950. After that date, the academy began requiring winners to sign a contract stating that neither they nor their heirs would sell the Oscar without first offering it to the academy for $1.

“The academy, its members and the many film artists and craftspeople who’ve won Academy Awards believe strongly that Oscars should be won, not purchased,” said academy spokeswoman Janet Hill in a statement. “Unfortunately, because our winners agreement wasn’t instituted until 1950, we don’t have any legal means of stopping the commoditization of these particular statuettes.”

Considered the ultimate totem to Hollywood celebrity, the golden figures have long inspired pride and envy among actors and filmmakers. In recent years, however, they have also fired the imaginations of deep-pocketed collectors, thieves and counterfeiters.

Sanders described the seller of the 15 Oscars only as a Los Angeles-area businessman with ties to the entertainment industry.

“He heard about the Orson Welles best screenplay Oscar for ‘Citizen Kane’ that we sold in December for $861,000 and decided now was a good time to sell his collection,” Sanders said.

Welles shared the 1941 best screenplay award with Herman Mankiewicz for “Citizen Kane,” and Mankiewicz’s statuette is among those being sold Tuesday.

Until now, only 15 other Oscars from the 1930s and ’40s have come up for public sale — and all individually, according to Tim Nyhus, an Academy Awards memorabilia collector from Puyallup, Wash., who has charted Oscar’s history on his website hollywoodgoldenguy.com.

“The academy has been very successful in preventing the sale of the statuettes,” said Nyhus, who tangled with academy lawyers himself when he sought to sell an Oscar replica.

Although early Oscar sales netted perhaps a few thousand dollars, that changed in 1993 when the Oscar won by actress Vivien Leigh for her performance as Scarlett O’Hara in “Gone with the Wind” was sold at auction for $510,000.

In 1999, Michael Jackson paid $1.54 million for the best picture statuette awarded in 1940 to David O. Selznick for “Gone with the Wind” — the highest price yet for an Oscar.

Some individuals have purchased Oscars at auction and donated them back to the academy. Director Steven Spielberg spent more than $1.3 million to acquire Oscars awarded to Bette Davis and Clark Gable with the specific intention of returning them to the academy. Kevin Spacey paid $156,875 for composer George Soll’s 1945 Oscar for “Anchors Aweigh” and did the same thing, according to Nyhus.

Although the design of the 81/2-pound, 131/2-inch trophy has changed little over the years, two of those being sold by Sanders —Norman Taurog’s 1931 best director Oscar for “Skippy” and Frank Lloyd’s 1933 best picture award for “Cavalcade” — display the winner’s name on the bottom of the base, out of view.

The most unusual Oscar being sold is Farciot Edouart’s 1937 technical award for a “dual screen transparency setup” he devised for Paramount Pictures. It’s shaped like a desk plaque.

Since the Academy Awards were first presented in 1929, there have been famous instances of lost or stolen Oscars. Margaret O’Brien’s 1945 award for outstanding child acting disappeared from her home, only to be found 50 years later at a Pasadena flea market and returned to her.

The most bizarre case occurred in 2000, when 55 Oscars were shipped from a Chicago manufacturing plant to Los Angeles. The container of trophies disappeared from a trucking company loading dock in Bell three weeks before the awards ceremony.

Later, a salvage man going through trash bins behind a drugstore in a Koreatown alley found 52 of them still in their shipping boxes.

Although one of the three missing Oscars was recovered in 2003 in a Miami drug raid, the other two are still missing, according to Nyhus.