Sell or Auction Your Screen Used Jumanji Prop, Memorabilia or Costume for up to $40,000+ at Nate D. Sanders 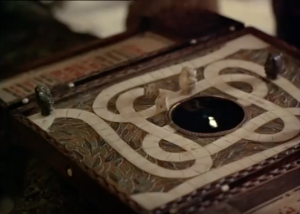 Board game from Jumanji 1995 prop

Recently, a Jumanji prop, being a Jumanji screen used board game sold for over $40,000.  We, at Nate D. Sanders Auctions (email Nate@NateDSanders.com) can obtain up to that price for you or more at auction.

About our auction house

Recently sold at our auction was over $6 million worth of original Academy Awards including two Citizen Kane Oscars, over $450,000 of screen-worn Shirley Temple costumes and Luke Skywalker’s screen worn Star Wars pants for $60,000.  Much major media attention was garnered for our Oscar sales.  In non-Hollywood sales, we have over $2 million worth of original Nobel prizes.  Here is an example of the great PR that we can obtain for you such as this article from E!:

For just a few tens of thousands of dollars, a piece of superhero cinema history can be yours.

Christopher Reeve’s iconic Superman costume and Michael Keaton’s batsuit are both currently listed at Nate D. Sanders Auctions, with the starting bids placed at $40,000 and $35,000, respectively.

Reeve’s costume, a rare “muscle tunic” from 1978’s Superman: The Movie, “features two stitched holes on the sides, used to attach the flying harness,” the auction house description reads. “Four snaps at top are for attaching the cape. Signature blue tunic is made complete with Superman’s large emblematic gold and red ‘S’ sewn onto the front.” The original tag, bearing the name of the costumier as well as Reeve’s, is still intact. Tights and cape (and flying harness) not included.

The Batsuit being auctioned off was worn by Keaton in 1992’s Batman Returns. More complete — but a decade and a half newer — than the Superman suit, the Batsuit “is in formed black rubber segments covered by the textured integral cape and cowl style mask, with long black leather gloves, boots and gold plastic belt and bat symbol. Original parts of the costume worn in the film are the cowl, cape and body; the gloves, belt, insignia and shoes are replicas for the display.” Finally, and perhaps best of all, the “costume comes displayed dramatically on a mannequin with chiseled face of Keaton.”

The auction for both pieces will end Jan. 26. And while you’re at it, some of the other pieces of movie history up for auction on the site include a dress worn and signed by Lucille Ball; Daniel Craig’s suit and sunglasses from Spectre; a jacket worn by John Wayne in various Republic Pictures films; and four different costumes and outfits worn by Shirley Temple, including the dress she wore to accept her Academy Juvenile Award in 1935.