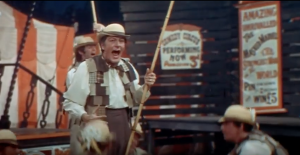 Please email us at Nate@NateDSanders.com.

Speaking of 1960’s Hollywood memorabilia and our auction success with it, we have sold the Captain Kangaroo Bob Keeshan estate including two items for over $200,000 each, and unrelated to the Chitty, but noteworthy, over $6 million dollars worth of original Academy Awards.  Here is a story from NPR about the estate, which also illustrates the fantastic PR we get for your great items:

Nostalgia For Sale As Captain Kangaroo’s Pals Are Auctioned Off More than 500 items from the Captain Kangaroo show — including Dancing Bear’s life-sized costume.

The classic children’s show Captain Kangaroo aired on TV for nearly 30 years, starting in 1955. After its creator and star, Bob Keeshan, died in 2004, his estate donated a few of his beloved hand puppets to the Smithsonian.

But if you’re like me and grew up in the 1960s and ’70s, you have hazy memories of Captain Kangaroo telling stories, drawing pictures and palling around with a whole cast of sidekicks, including the bespectacled Mr. Bunny Rabbit, a dancing bear, farmhand Mr. Green Jeans and Mister Moose, who told corny jokes and made pingpong balls rain down on the captain’s noggin. And all of them are due to be auctioned off Tuesday in Los Angeles.

Mr. Green Jeans’ famous jeans are also up for auction.

I got all nostalgic seeing Captain Kangaroo props and costumes on display in the garden of the Nate D. Sanders auction house — including, yes, Mr. Moose and the dancing bear. Auction manager Laura Yntema says more than 500 items are being auctioned, most with starting bids of $250. Up for grabs are pairs of Mr. Green Jeans’ denim overalls. And Dancing Bear’s furry man-sized costume held together with Velcro. “He’s a little dingy,” Yntema says, “but he’s not ripped or anything. I mean, the quality of this stuff is really, really great.”

Also on the auction block are scripts and awards, and Captain Kangaroo’s iconic red and blue peacoats. “They have the deep pouch pockets like kangaroos. So he would, you know, have little treats in there for all his characters,” Yntema says. “You really don’t need all this computer animation and gimmicks to really entertain kids, you know — just need some imagination.”

Yntema says Bob Keeshan’s idea for the show was to make Captain Kangaroo a grandfatherly figure for children. “He was pretty young when it started, so he had a full head of hair. And they actually made him older looking in the beginning. But then as time went on, obviously, he lost his hair and then they had to make him younger looking. So we have like five toupees of that kind of like floppy mop top.”

“He was just this kind, bubbly, weirdo man,” says Stephanie Beard, who stopped by the auction house to view some of the items she plans to bid on, like the ring of keys to Captain Kangaroo’s treasure house. Beard may sound like she’s 5, but she’s actually 31 years old and lends her voice for cartoons.

“I’m kind of a third-generation Captain Kangaroo fan,” she says. “You know, my pop showed my dad growing up, and they passed it down to me, and it was kind of a really big deal for us. My grandfather made us a set of those treasure house keys, and we would play Captain Kangaroo growing up. I have a very close fondness to this stuff. And this just brings back floods.”