Sell or Auction Your Robert Crumb Art For up to $750,000 or More at Nate D. Sanders Auctions

FREE APPRAISAL. To buy, auction, sell or consign your Robert Crumb art that is for sale, please email your description and photos to [email protected]. Nate D. Sanders Auctions (http://www.NateDSanders.com) holds monthly auctions and can offer you a high reserve for your original Robert Crumb art.

We just set the art world record for Hal Foster art prices realized by selling an original art for over $70,000.  So, now that we at Nate D. Sanders Auctions (http://www.NateDSanders.com) get world records for your comic and illustration art, what are you waiting for?  Please email [email protected] today.

Robert Crumb art is valuable mostly for his work, mostly with the “underground” works.  He is the comic artist with the most expensive auction prices realized today, and by far.  Here are actual sale prices below.  Nate D. Sanders can get you these prices for your Robert Crumb art at auction today:

Original Cover Robert Crumb Art for Volume 6 of ”The Complete Crumb Comics” Entitled ”On the Crest of a Wave” Sold for $41,250 at Nate D. Sanders Auctions

Incredible original cover Robert Crumb art for ”The Complete Crumb Comics”, Volume 6 entitled ”On the Crest of a Wave”, published by Fantagraphic Books in 1991. This fantastic example of original Crumb artwork shows Crumb himself riding the crest of a wave of flesh and humanity, populated with familiar faces from 1960s counterculture, including Jerry Garcia. This piece served as the cover for Volume 6 of a 17 volume exhaustive series of Crumb’s artistic output, with Vol. 6 documenting approximately two years from the late 1960s into the early 1970s. Ink on illustration board, cover measures 13” x 17” with ”The Complete Crumb Comics” header affixed; artwork alone measures 10” x 13”. Artwork is affixed at the top to the backing mat by two pieces of tape, measuring 16” x 20” with mat. Near fine condition.  This Robert Crumb art was sold by Nate D. Sanders Auctions for $41,250.
Click above for larger image. 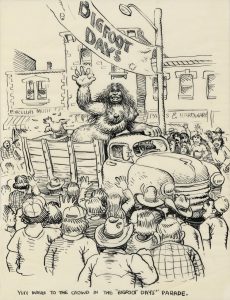 We at NateDSanders.com might be able to get press for your Robert Crumb art pre-auction as we did when we just set the world record for Prince Valiant comic art when it sold for $70,461.  Here is a post-auction article illustrating our success with illustration art and obtaining press for your items.

One of the most famous Prince Valiant comic strips by the legendary Hal Foster was auctioned at Nate D. Sanders Auctions this week, and sold for a staggering $70,461. While interest in the strip is high in its 80th anniversary year, the final sale amount is an indication, yet again, of how collectible some comic art is.

Published 28th May 1939, this episode is considered one of the greatest pieces of artwork by Hal Foster in his career, the original artwork for the 120th ‘Prince Valiant‘ Sunday comic strip. In this instantly recognisable piece – featured on the cover of Fantagraphics‘ Prince Valiant Volume 2: 1939-1940 and in numerous ”Prince Valiant” publications, the panel of Andelkrag Castle often used to demonstrate Foster’s superb technique from the early years of the strip – Val sees the foreboding castle of Andelkrag in person, surrounded by Huns as they prepare to attack it. 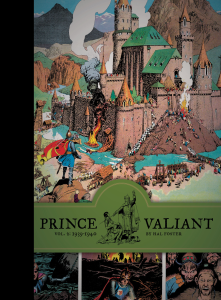 The six panel strip measures 26” x 34.5”, (the large Andelkrag panel measures 17” x 21” by itself), with incredible detail showing the seemingly impregnable fortress, the mountains behind it, the flames roiling up aside it and Prince Valiant standing upon a hillside, gazing at its beauty and enormity. In this strip, Val makes his approach and plunges into the river moat at darkness, to find a fire-raft built by the Huns in order to destroy Andelkrag’s bridge.

As Prince Valiant destroys their handiwork, the Huns vow revenge in return…

The artwork is signed by Hal Foster on the second panel, inscribed to ”Edward W. Larson / with friendly greetings / Hal Foster” and the lot was accompanied by the colour newsprint of this artwork and two ”Prince Valiant” books featuring this strip.

Hal Foster created epic adventure and romantic fantasy in his legendary Sunday strip, Prince Valiant, for 35 years. Realistic in its visual execution and noble in its subject, depicting a time in which the fabled warriors of history and legends fought together for the greater good, it remains one of the great masterpieces of the medium.

FREE APPRAISAL. To buy, auction, sell or consign your Robert Crumb art that is for sale, please email your description and photos to [email protected]. Nate D. Sanders Auctions (http://www.NateDSanders.com) holds monthly auctions and can offer you a high reserve for your original Robert Crumb art.