Don McLean handwritten lyrics to his iconic “‘American Pie’ – the only lyrics ever sold at auction apart from the original draft- go under the hammer Thursday, January 26th at Nate D. Sanders Auctions.  Here is the description of the lot:

Don McLean handwritten lyrics to “American Pie”, the song that’s captured the imagination of the world since its release in 1971 and best defines the cataclysmic changes of the 1960s, America’s metamorphosis from teenager to adult. Notoriously reticent about revealing the meaning of the lyrics, McLean has offered hints about individual lines, but has said that more broadly it’s about America moving backwards and losing her innocence since the shocking death of Buddy Holly in February, 1959. Although largely inscrutable, the power of the lyrics coupled with the guitar and piano melody, leaves one with a feeling of wistfulness, joy and patriotism, cementing its status as the Great American Song of the 20th century. Penned on eight sheets of McLean’s personal stationery featuring the gold “thumbs up” sign of the “American Pie” album art, this is the only copy offered for sale at auction apart from the original draft which sold for $1.2 million. Two other copies of handwritten lyrics exist: one at the Harvard library and one given by McLean to a friend. Upon the sale of these Don McLean handwritten lyrics, Don McLean has agreed not to handwrite another copy for two years. Don McLean handwritten lyrics read in full:

1. a long long time ago I can still
remember how that music used
to make me smile
And I knew if I had my chance
I could make those people dance
Maybe they’d be happy for a while
But February made me shiver
with every paper I’d deliver.
Bad news on the door step
I couldn’t take one more step
I can’t remember if I cried
When I read about his widowed bride
but something touched me deep inside

[Page 2]
The day the music died

2. Did you write the book of love
and do you have faith in God above
if the Bible tells you so.
Now do you believe in rock n roll
can music save your mortal soul
can you teach me how to dance real slow

[Page 3]
Well, I know that you’re in love
with him cause I saw you dancin’
in the gym – you both kicked off your
shoes, man, I dig those rhythm and blues
I was a lonely teenage broncin’ buck
with a pink carnation and a
pick up truck, but I knew I was
out of luck
The day the music died. I started
singin’ – Chorus.

3. Now, for ten years we’ve been on
our own and moss grows fat on a
rollin’ stone but that’s not how
it used to be
Why when the jester sang for the king

[Page 4]
and queen in a coat he borrowed
from James Dean and a voice that
came from you and me
and while the king was looking
down the jester stole his thorny
crown, the court room was adjourned
no verdict was returned and
while Lennin [sic] read a book on
Marx a quartet practiced in the
park and we sang dirges in
the dark the day the music
died – they were singin’

[Page 5]
4. Helter skelter in the summer
swelter the birds flew off with
a fallout shelter eight miles
high and fallin’ fast
It landed foul on the grass
The players tried for a forward
pass with the jester on the
sidelines in a cast. Now the
half-time air was sweet perfume
While the sergeants played their
marching tune we all got up
to dance but we never got
the chance, the players tried
to take the field, the marching
band refused to yield do you

[Page 6]
recall what was revealed
the day the music died

5. and there we were all in one
place a generation lost in
space with no time left to
start again. So come on Jack
be nimble, Jack be quick,
Jack Flash sat on his candle
stick cause fire is the devil’s
only friend and as I watched
him on the stage my hands
were clenched in fists of rage

[Page 7]
No angel born in hell could
break that Satan’s spell and
as the flames climbed high into
the night to light the sacrificial
rite I saw Satan laughing
with delight the day the music
died and he was singin’!

6. I met a girl who sang the
blues and I asked her for some
happy news but she just smiled
and turned away – I went
down to the sacred store
where I’d heard the music

[Page 8]
years before but the man there
said the music wouldn’t
play and in the streets
the children screamed the
lovers cried and the poets
dreamed but not a word was
spoken the church bells all
were broken and the three men
I admire most the father, son
and the holy ghost, they caught
the last train for the coast
the day the music died 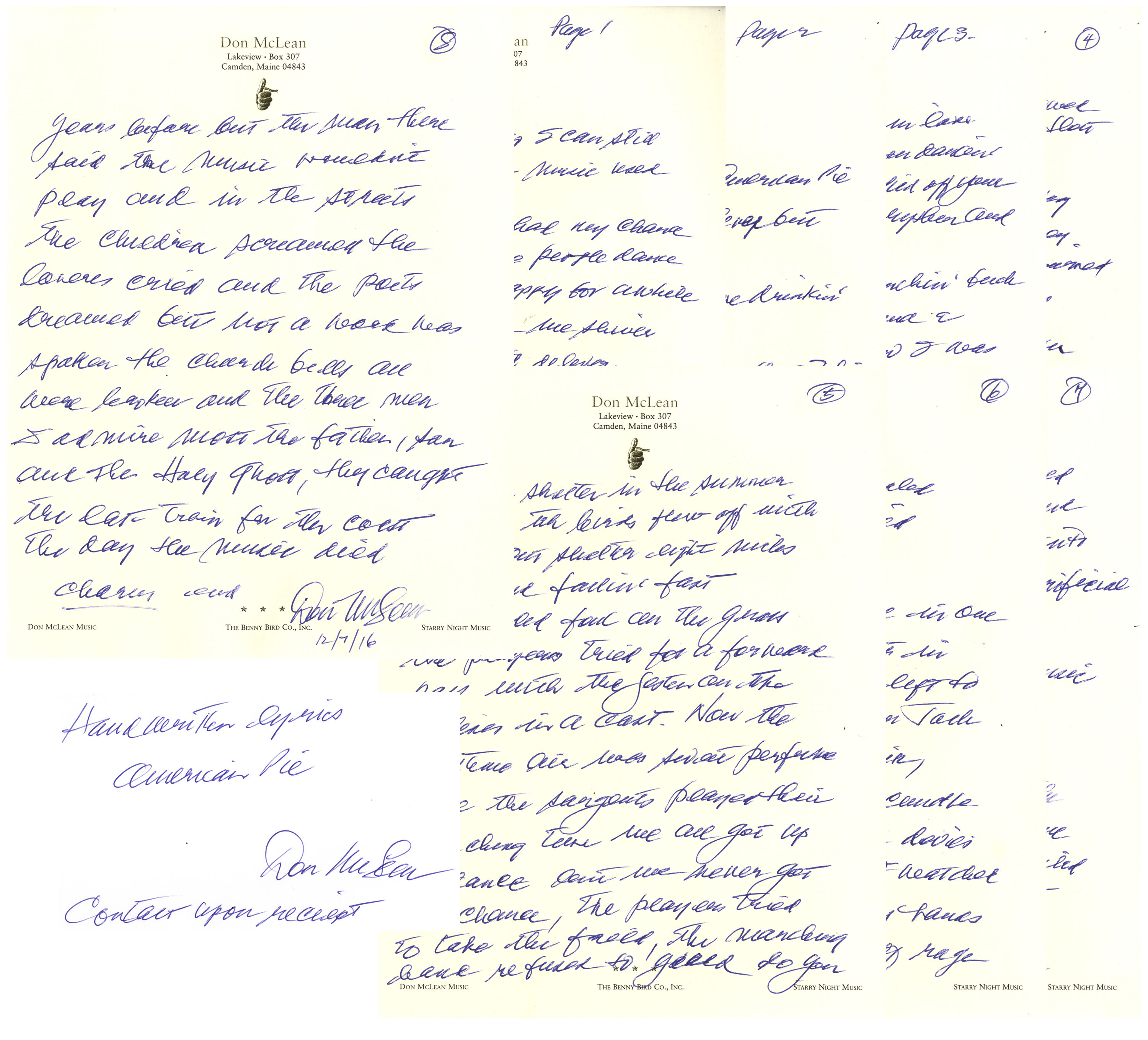 Lyrics handwritten by famous musicians, performers, and composers are highly sought after by collectors.  If you have original Don McLean handwritten lyrics, contact us for a free appraisal.