Amelia Earhart Signed Limited Edition of ”20 Hrs. 40 Mins.” — One of Only 150 Limited Edition Copies Signed by Earhart, With a U.S. Flag Carried Aboard Her 1928 Transatlantic Flight

Scarce copy of ”20 Hrs. 40 Mins.”, one of only 150 signed by Amelia Earhart in the limited edition. New York: G.P. Putnam’s Sons, 1928. Signed by Earthart on the limitation page, ”Amelia M. Earhart”, where the copy is designated as #67 in the limited edition of 150. Volume is full of photographs documenting Earhart’s groundbreaking transatlantic flight in 1928, and contains one of the U.S. flags carried aboard her aircraft ”Friendship”, affixed to the front pastedown. Flag is described on the limitation page as ”one of the small silk flags which Miss Earhart carried in the ‘Friendship’ from Boston to Wales”. Copy also has excellent association, previously belonging to the pilot Janet Dietrich (with two of her business cards included), one of the women of Mercury 13, a privately funded program that trained 13 women according to the same physiological screening standards as the Mercury 7 astronauts. Book is bound in publishers maroon and gilt boards, with deckled edges. Runs 374pp. and measures 6.5” x 10”; flag measures 3” x 2.25”. Light shelf wear, otherwise an exceptional near fine copy. Sold for $10,938.

Amelia Earhart twice-signed ”Certificate of Landing” confirming the first and historic transatlantic solo flight made by a woman. Dated 21 May 1932, document is partially filled out by Earhart and signed twice by her under ”Full name of pilot” and ”Signature of Pilot”. She also fills out the information on her Lockheed Vega plane as well as the date, ”May 20 to May 21, 1932”. Other portions are filled out by the witnesses in Londonderry, Northern Ireland, where Earhart was forced to land after nearly 15 treacherous hours in flight. After leaving Newfoundland, Canada on 20 May 1932, Earhart was forced to contend with a failed altimeter before being struck by severe thunderstorms that buffeted her plane. Her Lockheed dropped a precipitous 3,000 feet as it began to spin wildly, with flames trailing from a broken engine weld. Although she was able to right the plane and hold level through the darkness, she then saw flames trailing from a broken engine weld. She continued on, with the weakening metal vibrating more ominously as the flight progressed. It was not until she turned on the reserve tanks and discovered they had a leaky gauge when she knew she had to land. Fortunately, the coast of Ireland was in the distance, where she landed at at approximately 2:30 in the afternoon on 21 May. When a farm hand approached her plane and asked her where she came from, she famously replied ”America”. Single page document is addressed to the National Aeronautic Association in Washington, D.C., with all requisite portions filled out to certify her flight, five years after Charles Lindbergh’s. Document is in very good to near fine condition, with folds, light creasing and puncture marks at top. A landmark aviation and women’s history document. Was at a past Nate D. Sanders Auction. 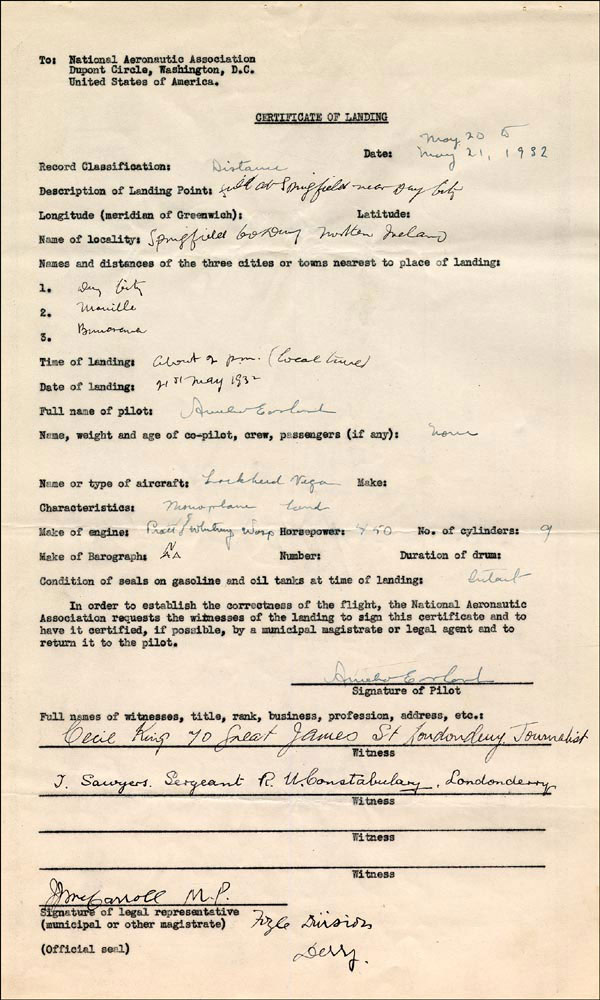 To bid on this incredible piece of American history, please visit the lot on our website:   http://natedsanders.com/Amelia_Earhart_Twice_Signed___Certificate_of_Landi-LOT46234.aspx

”Amelia Earhart” signed photo of herself, striking a statuesque pose before an airplane. The record-breaking aviator dons pilot coveralls and signs in bold black ink. Glossy photo measures 8” x 10”. Some creasing and pinholes to corners with a chipped lower right corner. Adhesive and paper residue to verso. Very good condition with a perfect Amelia Earhart autograph. Sold for $3,355. 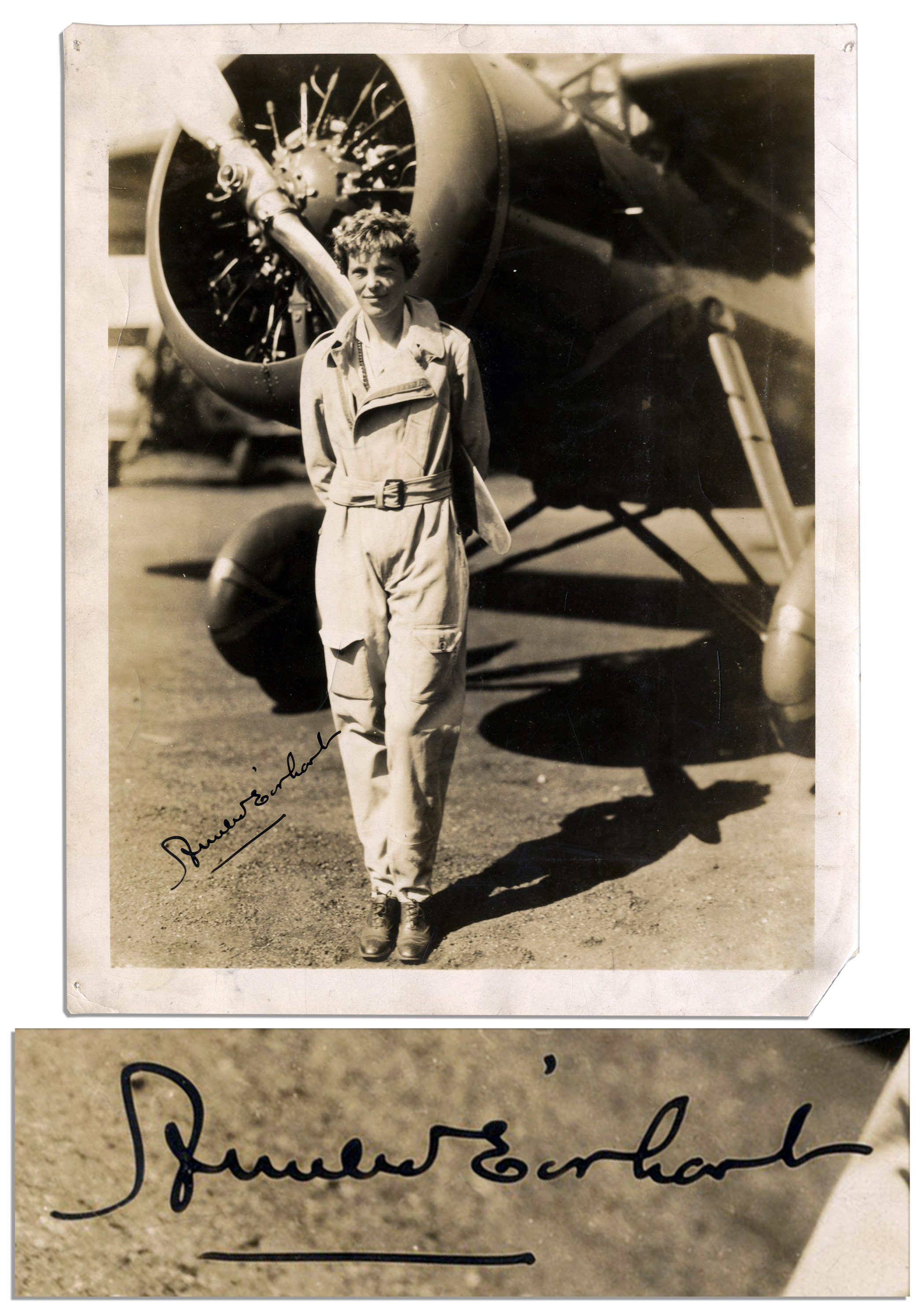 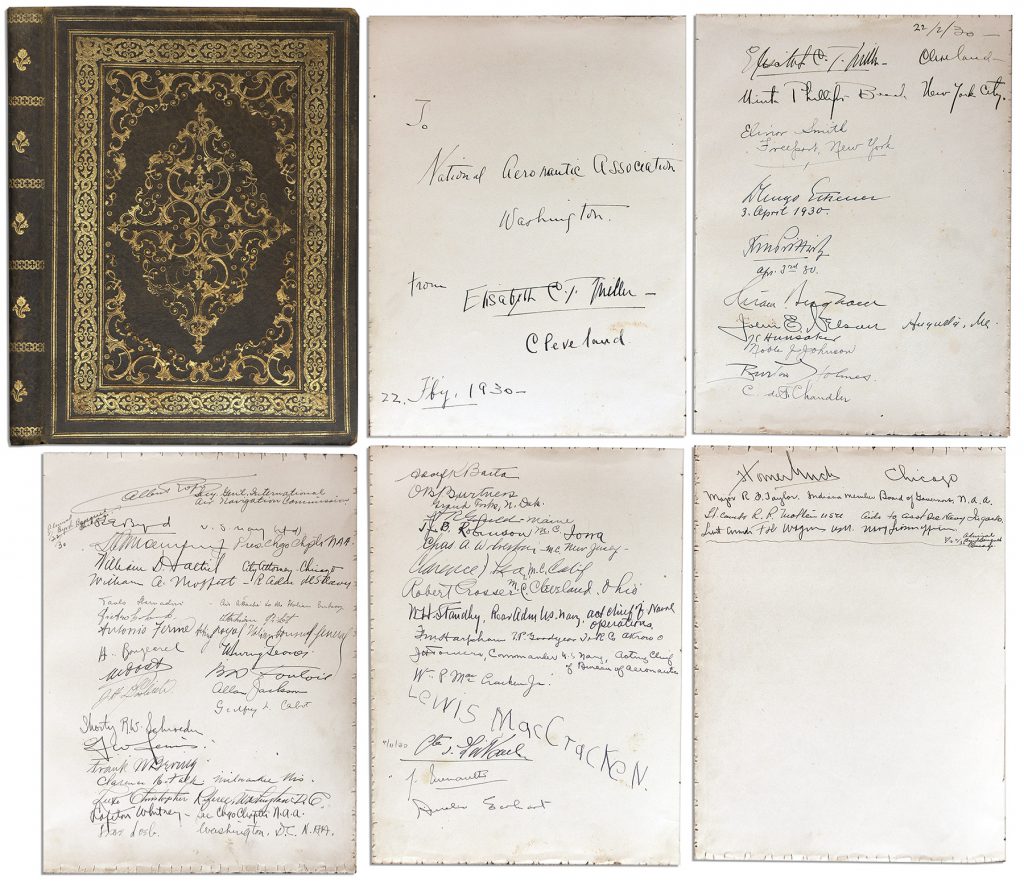 Guestbook at the NAA 1930 Conference with Amelia Earhart Autograph & 26 Others. Click to enlarge.

Amelia Earhart signed photo, along with her flight team Wilmer Stultz & Louis Gordon, after being the first woman to fly across the Atlantic Ocean. After landing in Southhampton, England on 20 June 1928, this photo was taken on the docks showing Earhart receiving a heroine’s welcome. Sepia toned glossy photo shows Earhart, in full flight gear, standing with Stultz & Gordon. Along with the three signatures, photo includes inscription in what appears to be Earhart’s hand, reading ”Best of luck to Louis Crossette”. Framed to an overall size of 11.25” x 9”. Photo is loosely stuck to frame backing, resulting in a tear along the left edge, and a small chip along Earhart’s lower leg, not affecting image or signatures. Very good condition. Sold for $1,562. 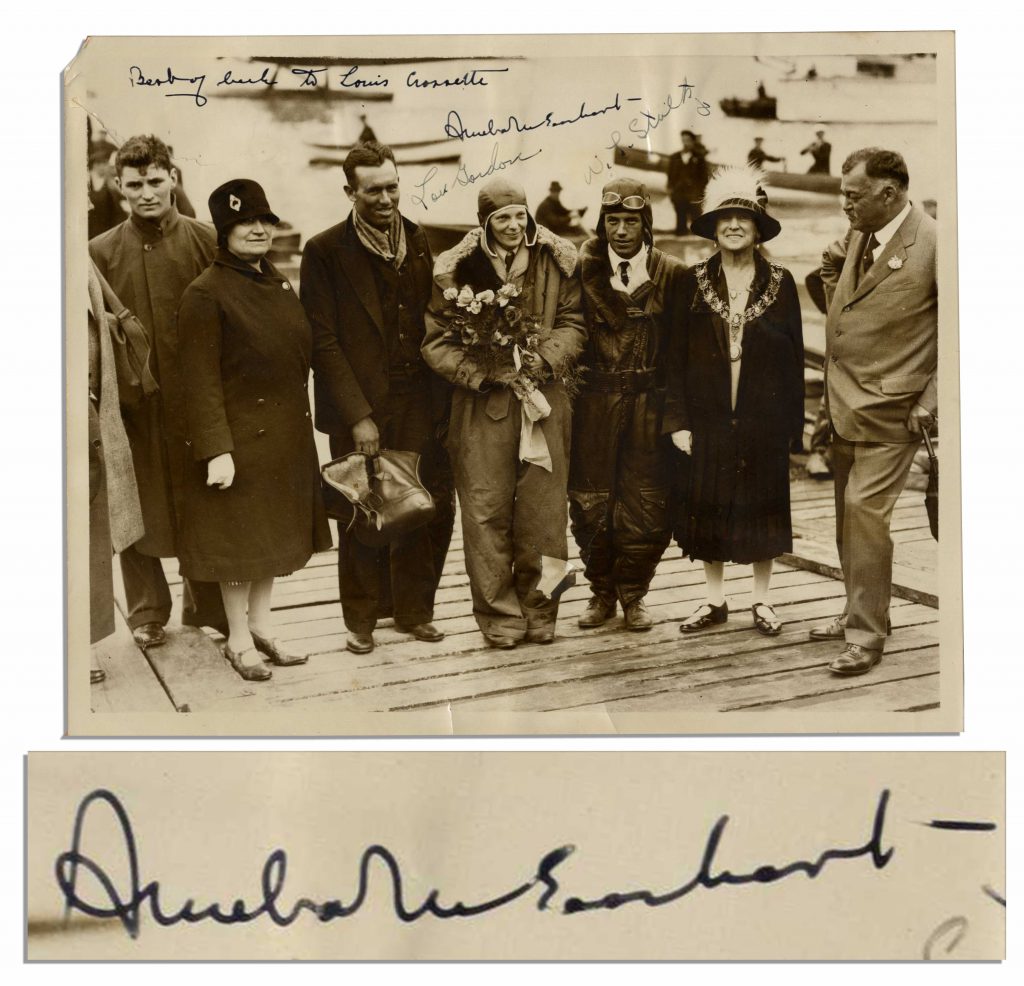 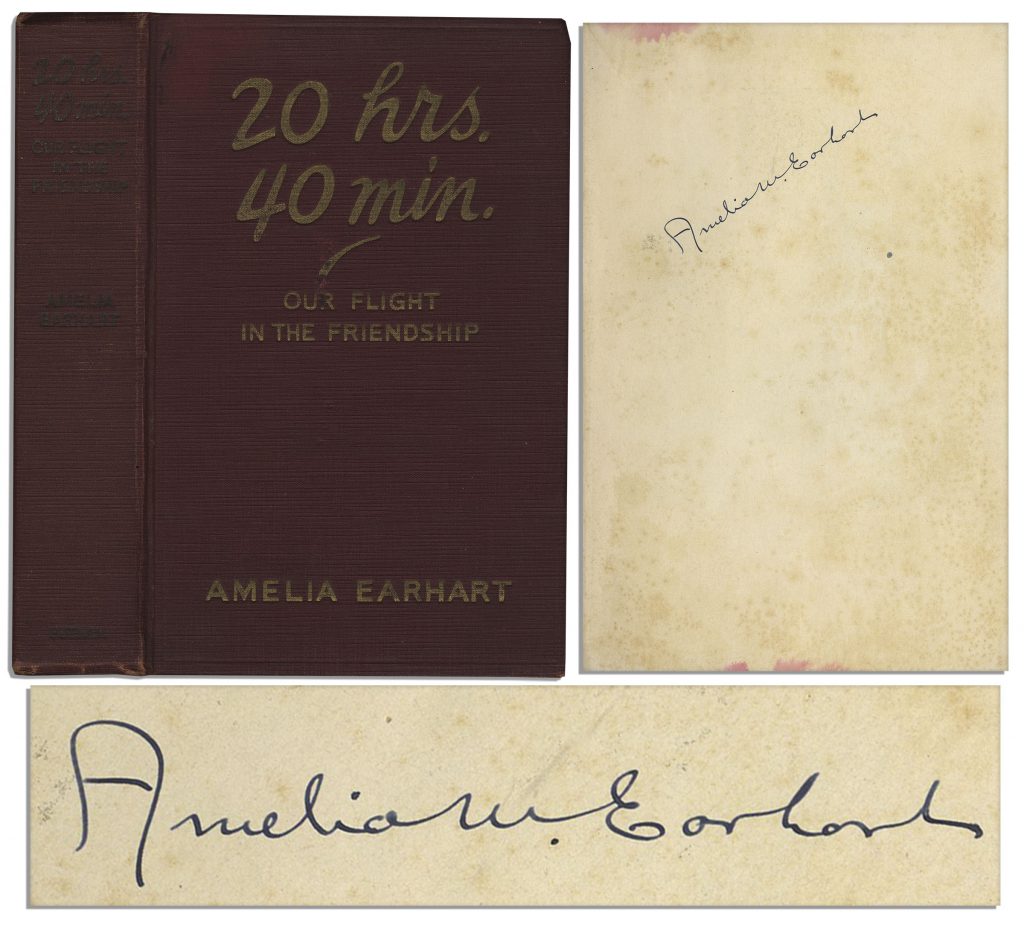 Amelia Earhart signed book, ”20 hrs. 40 min. – Our Flight in the Friendship”, published by G.P. Putnam’s Sons: New York: 1928. Signed ”Amelia M Earhart” by the great aviatrix in blue ink on the verso of the frontis photo page. Generously photo-illustrated volume runs 314pp. and measures 5.5” x 8.25”. Bound in maroon cloth boards with gilt lettering. Wear to boards and toning to leaves. Signed page is detached and bears added notations by prior owners in ink and pencil, else near fine. With JSA LOA. Sold for $900. 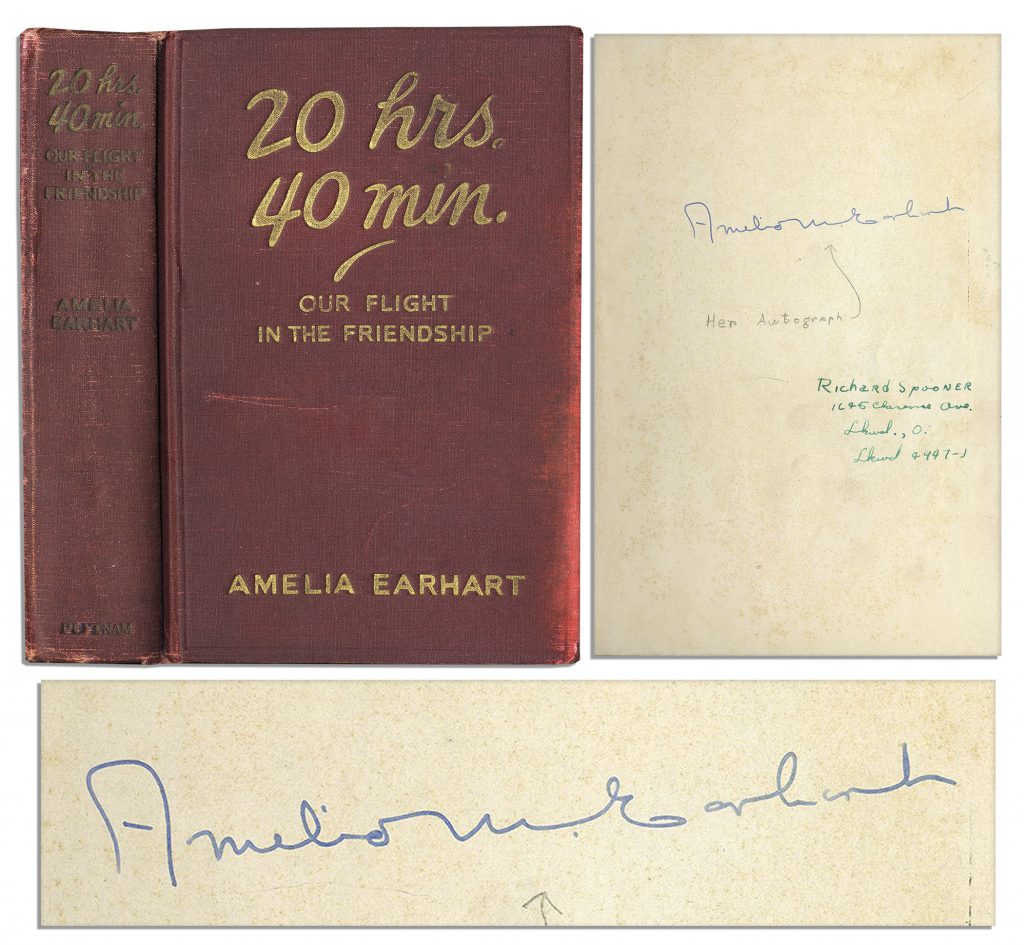 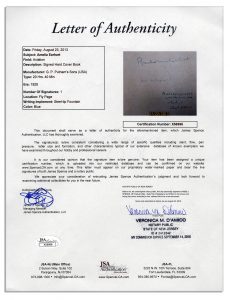 Amelia Earhart signed first edition, second printing of ”The Fun of It” published by Brewer, Warren, & Putnam: New York: 1932. Earhart autographs the fly-leaf: ”Amelia Earhart” in blue ink. This memoir is the female pilot’s second book, discussing her personal background and the achievements of the other daring women in aviation. She’s quoted as saying: ”Flying may not be all plain sailing, but the fun of it is worth the price…” Runs 218pp. Includes very rare mini record enclosed on the rear pastedown from Earhart’s 1932 International Broadcast in London. Bound in brown cloth boards with white lettering. Measures 5.75” x 8.25”. Fabric loss to rear hinge and spine base. A prior owner’s bookplate is affixed to the front free endpaper. Some toning to leaves. In very good condition. Sold for $832. 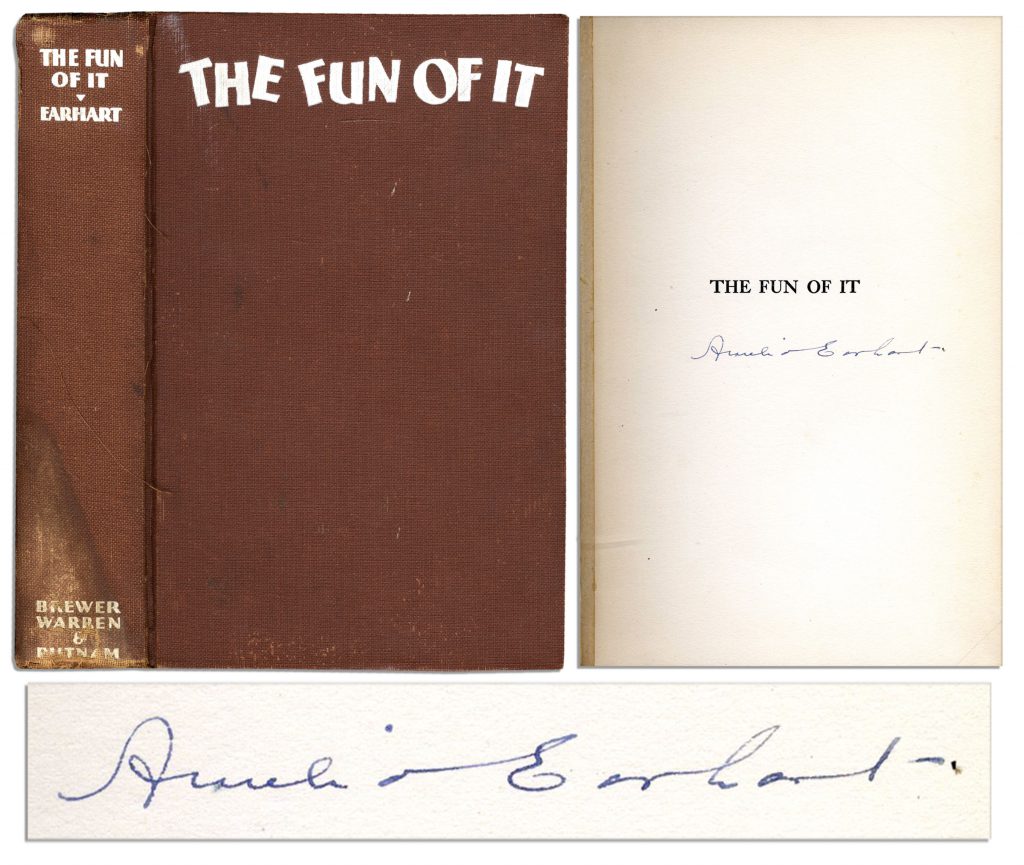 ”The Fun of It” First Edition with Amelia Earhart Autograph. Click to enlarge.

Amelia Earhart Signed Menu From 1937 in Hawaii, Three Months Before Her Disappearance & Just Days After Her Failed First Attempt at the Ill-Fated World Flight

Amelia Earhart menu signed from the SS Malolo dated 22 March 1937, when it was stationed in Oahu for repairs. Earhart signs the back cover in pencil, ”Amelia Earhart” just months before her attempted world flight and subsequent disappearance on 2 July 1937. Earhart was actually in Hawaii when she signed this menu after the first failed attempt for her around-the-world flight; after trying to lift-off in Honolulu on 20 March, her plane ground-looped, causing severe damage to the plane, and delaying the trip for several months. Menu from the SS Malolo features an illustration of Polynesian women on the front, with the date, dinner menu and wine list in the interior. Menu measures 8.75” x 11.75” folded. Light wear and soiling, overall in very good condition. Sold for $666. 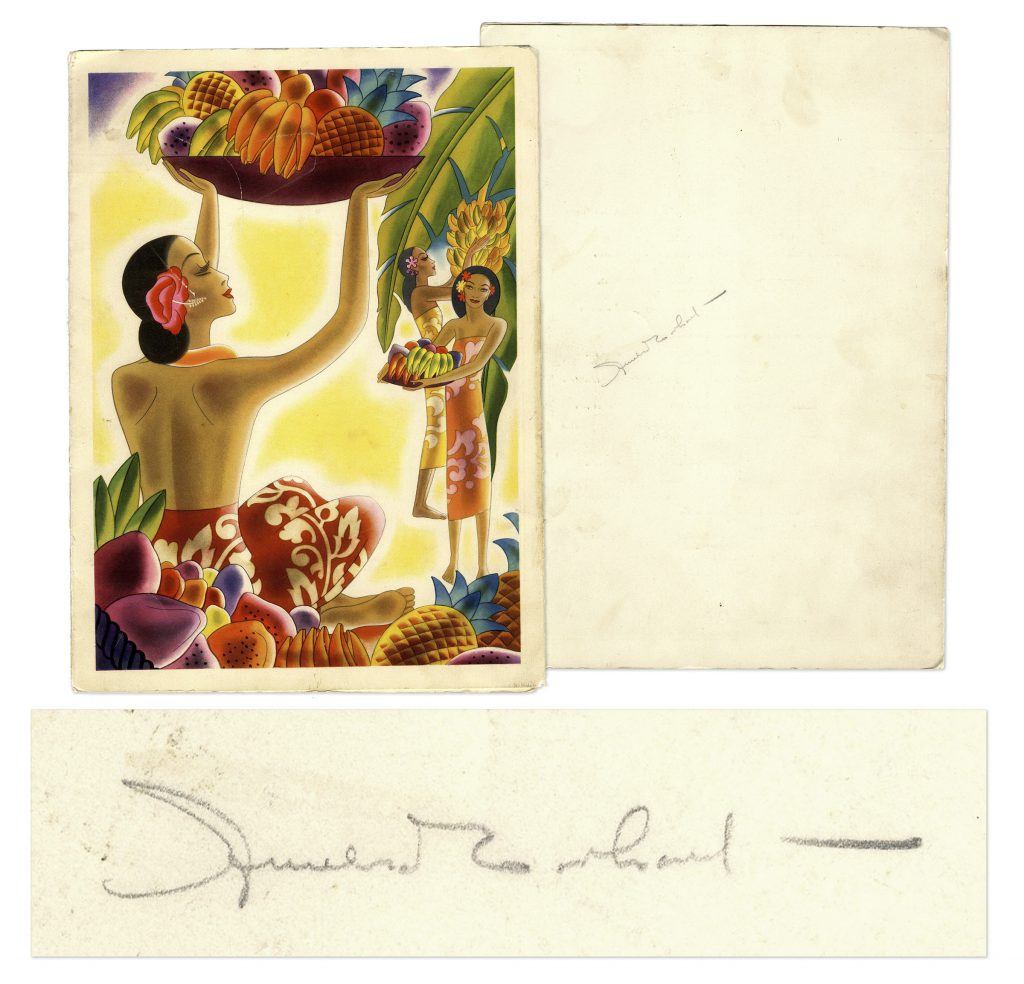 Contact Nate Sanders for a free estimate of your Amelia Earhart autograph.

We offer the following services for your Amelia Earhart autograph: