Vicksburg Letter from David Porter Sells for $4,200 at NateDSanders.com Auctions

Civil War Admiral David Dixon Porter autograph letter signed, “D.D. Porter” to his mother. Datelined Vicksburg, 15 June 1863 it reads: “…I send you our weekly…it will give you all the news. We are fighting terrifically here. Vicksburg will soon be ours it is a mere question of time…[T]here is no hope for the Rebels…I look upon a Commander now as about equal to a Lieutenant. Commanding in olden times, an admiralship amounts to nothing without pay and the admiral may get captains pay – a commander gets commander’s pay…I could wash my hands of the whole concern. I am so sick of any politicians…” Just months earlier, Porter had famously run the Confederate gauntlet at Vicksburg to help General Grant secure the city, which happened just a few weeks after this letter. 3pp. on card-style stationery measures 5.25″ x 8.5″. Staining along horizontal fold, else near fine.  Sold for $4,200. 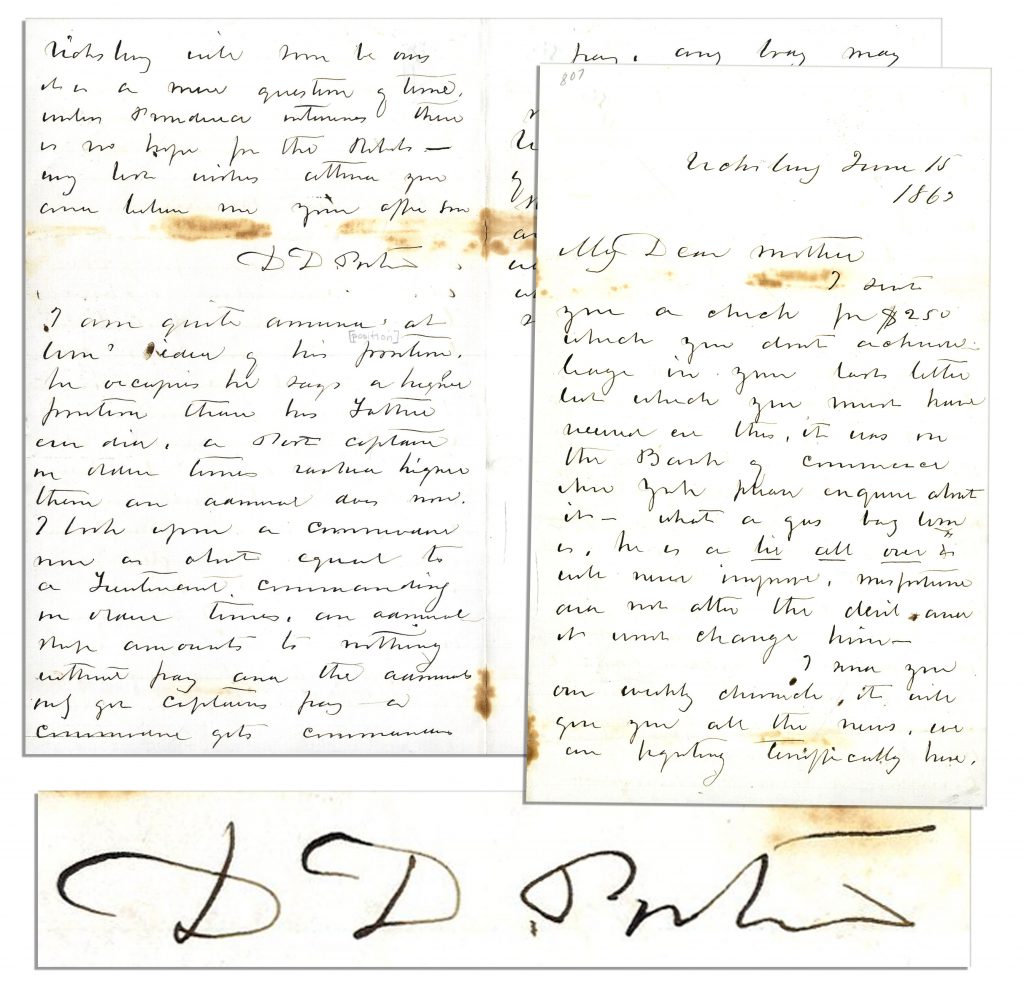 1862-1863 diary of Oscar L. Williams, 11th New Hampshire Infantry, Company F. Entries dated from 11 September 1862 to 28 July 1863 include camp life, military movements and battle descriptions. Williams includes numerous details from the siege of Vicksburg. 12 June “Started at day light met 2 gun boats passed Island No. 64” 14 June “Started at day light landed at Young’s point at 9am put up our tents near the cut off. In sight of Vicksburg continued firing upon the city through the day and night” 20 June “Hot and heavy firing in the direction of Vicksburg early this morning” 23 June “very hot between 12 & 1 this morning. 250 men detailed from the Regiment for fatigue duty on entrenchments. Struck tents and moved about 1 miles towards the river and encamped on a bluff covered with berry bushes. Rainy through the night” 24 June “cloudy and sultry. heavy firing at Vicksburg result not known” 25 June “very hot firing at Vicksburg continued” 27 June “men working on entrenchments” 29 June “had orders to march at 9am marched 8 miles towards big Black River and encamped near Oak Ridge. all very tyred” 4 July “Vicksburg surrendered at 8pm to General Grant” Entries from the Confederate evacuation of Jackson include 8 July “Started a little after sunrise. Had to stop a number of times for teams to pass. Started about 5pm marched toward Jackson” July 9 “Started about 8 in the direction of Jackson. A large number of the boys had to fall out on account of the heat” 10 July “Had orders to leave knapsacks. Started about 7am. Halted and formed line of battle the men laying on there guns all night about 2 miles from Jackson Missippi” 12 July “Were aroused at 3am and deployed out as skirmishes commenced at day light and kept it up till dark. 1 killed Corp. Stickny Co A. 9 wounded, went to digging rifle pits as soon as dark” 13 July “expecting an attack, sharp firing on both sides” 16 July “David W. Bagly was wounded while in front with a rifle ball fired from a rebel gun, wounded in the leg above the knee” 17 July “took position in the rifle pits at 2am all quiet through the day & night. Ordered at sunrise to advance our line, to our great surprise found the rebels had returned during the night leaving the way to the City of Jackson all clear and we were not long in gaining their Rifle Pits” Entries preceding and surrounding the battles of Fredericksburg include 13 November “Struck tents 5 am. soon after starting the Rebels commence to throw shells at one wagon train, our artillary refilled and lost one man, marched 4 miles” 19 November “Struck tents 6 am marched 8 miles to Falmouth Heights oposite Frederickburg City” 12 December “Crossed the River to Frederickburg” 13 December “Battle of Frederickburg” 15 December “the Troops commenced to retreat across the river as soon as it was dark our troops were all acrossed the river at day light this morning” Oscar Williams died of disease on 19 April 1864. The 11th New Hampshire Infantry, formed during Lincoln’s call for 300,000 men for three years, was engaged in many other battles including Knoxville, Wilderness, Spottsylvania, Cold Harbor and Petersburg. Ink entries are written from the beginning of a 1863 diary; dates for each entry are also written in as they do not correspond to the dates printed on each page. Pocket sized diary measures 3″ x 5.75″. Cover worn along hinges though binding remains tight. Interior pages clean with only slight toning. Overall excellent condition. A graphic account of battles in the Western Theatre.  Better than a Vicksburg letter.  Sold for $4,700. 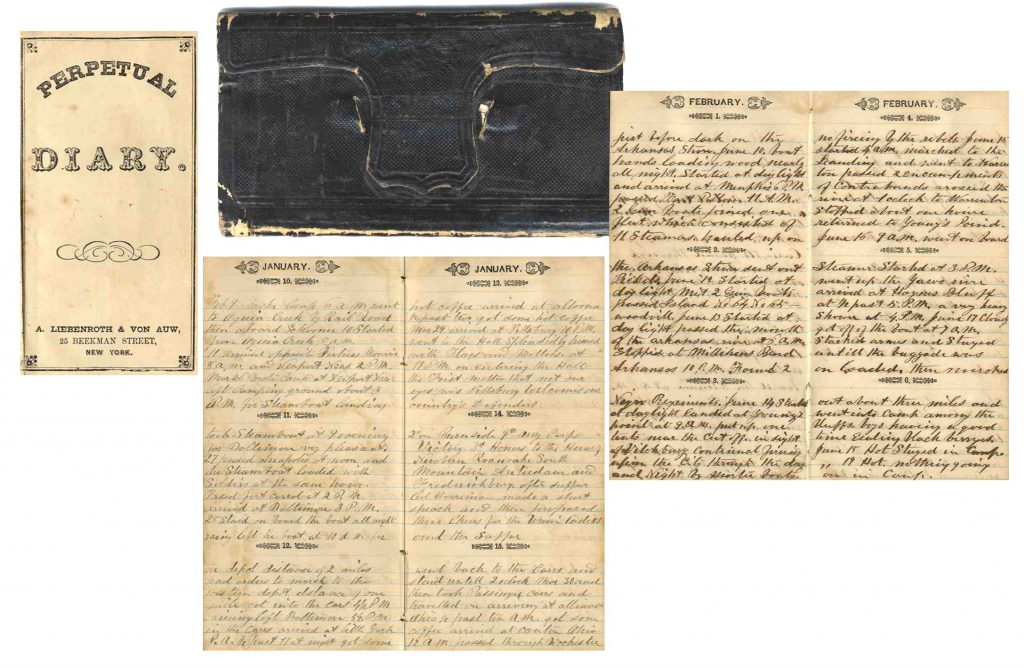 Nate D. Sanders Auctions offers the following services for a Vicksburg Letter or letters from the Civil War: