Lou Gehrig Autograph on a Photo with Babe Ruth Sells for $19,036 at NateDSanders.com Auctions

FREE LOU GEHRIG AUTOGRAPH APPRAISAL —  Email Nate@NateDSanders.com or call (310) 440-2982 Nate D. Sanders Auctions (http://www.NateDSanders.com) Lou Gehrig autographs (on contracts) have sold for hundreds of thousands of dollars recently.  What is yours worth?  Sell it for huge amounts at auction today, if you choose.

Babe Ruth and Lou Gehrig autograph photograph. 5″ x 7″ black and white image depicts the two Yankee greats standing side by side on the baseball field wearing their pinstripe pants. Inscribed by Ruth in brown ink at the upper left, “For Walter from, ‘Babe’ Ruth” beside which Gehrig signs in black ink, “& Lou Gehrig”. Small .25″ tear (with no emulsion loss) at top, not affecting either signature, else fine. A difficult to acquire pairing of legendary signatures on a single photograph.  A Babe Ruth signature with the quotation marks around “Babe” typifies his pre-1928 autograph and will sell at a higher value as well.  Sold for $19,036. 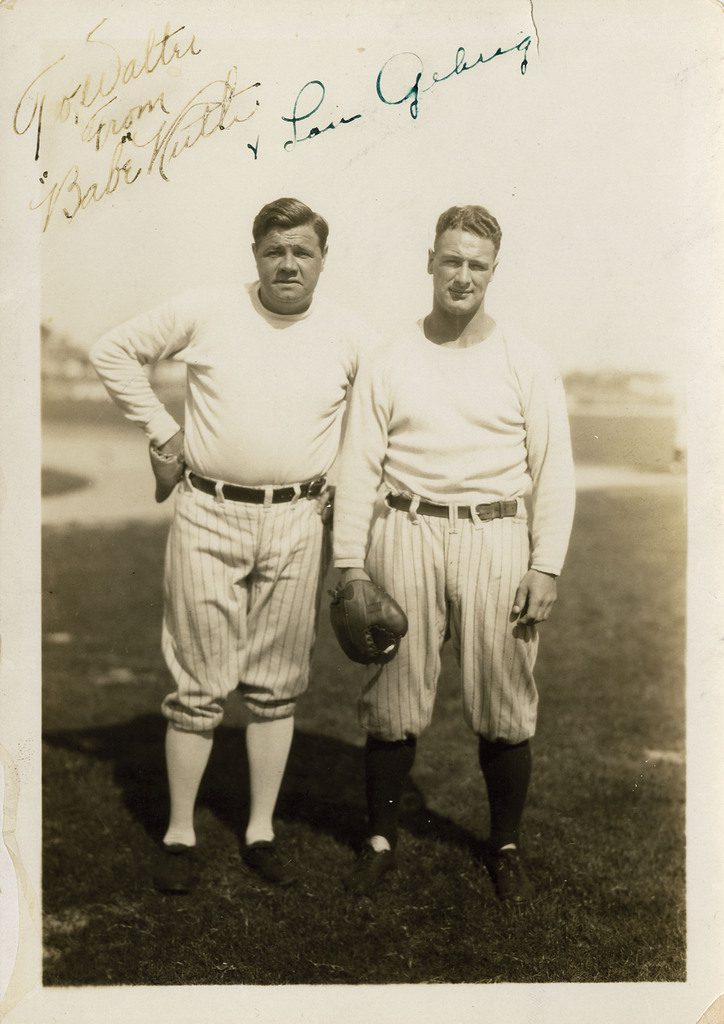 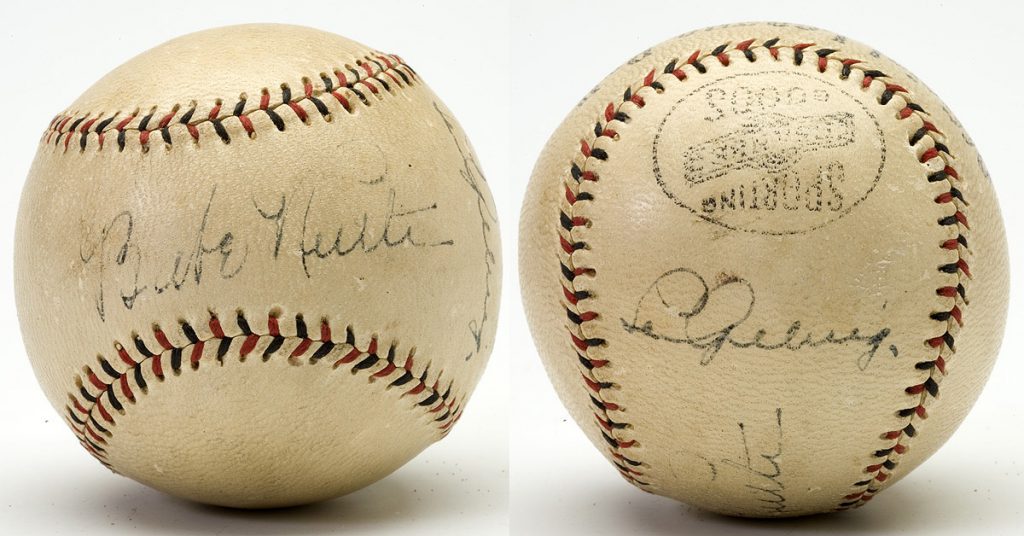 Babe Ruth & Lou Gehrig Autograph on a Ball from 1927

Babe Ruth and Lou Gehrig autograph on a baseball. On the sweet spot, Ruth’s black ink penning reveals sizable upper-case “B” and “R” characters. Gehrig signature in black ink on adjacent panel. The presence of Johnson’s facsimile signature, under which penmanship removal can be seen, coupled with the quotation marks around “Babe” (in Ruth’s own hand, of course) likely date the keepsake to 1927, as Johnson was supplanted by Barnard in 1928, the same year Ruth abandoned the use of quotation marks. The medium-toned sphere features prominent stampings and vibrant, alternating red and blue laces. Accompanied by Letters of Authenticity from PSA/DNA and James Spence Authentication attesting that the Babe Ruth autograph is authentic. Sold for $10,470.

Babe Ruth and Lou Gehrig autograph on a baseball. On 4 July 1928 the New York Yankees and the Washington Senators met at Griffith Stadium to play a doubleheader. During the course of that day, the Bambino and the Iron Horse applied their autographs to this clean Official American League “Barnard” ball. The Babe’s lengthy side panel inscription rates a PSA 8 and reads “To Joseph Rebentisch, Washington D.C., From ‘Babe’ Ruth.” Gehrig simply signed his name in a lighter but still entirely legible ink. The date “7/4/28” is penned below Gehrig’s signature in an unknown hand. Lot accompanied by a full letter of authenticity from PSA/DNA stating that the Babe Ruth autograph is authentic.  Sold for $7,500. 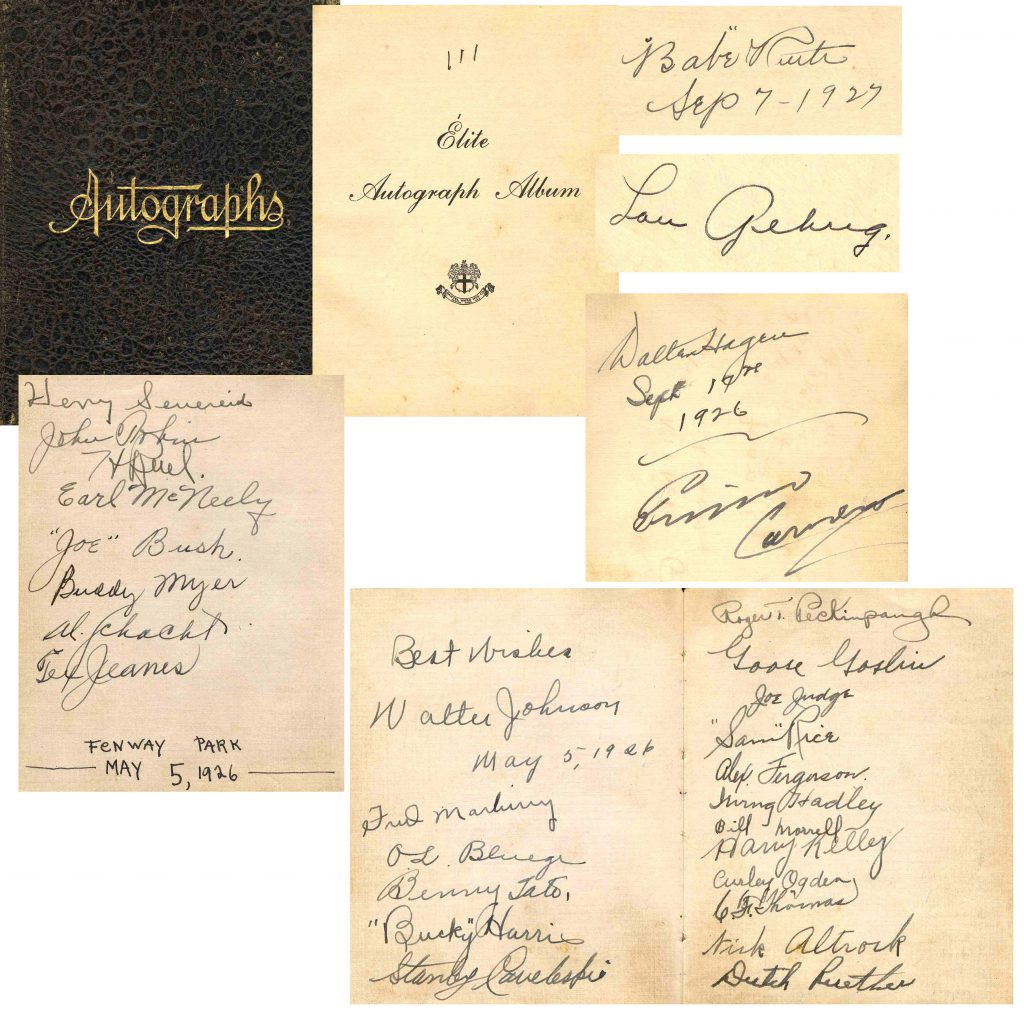 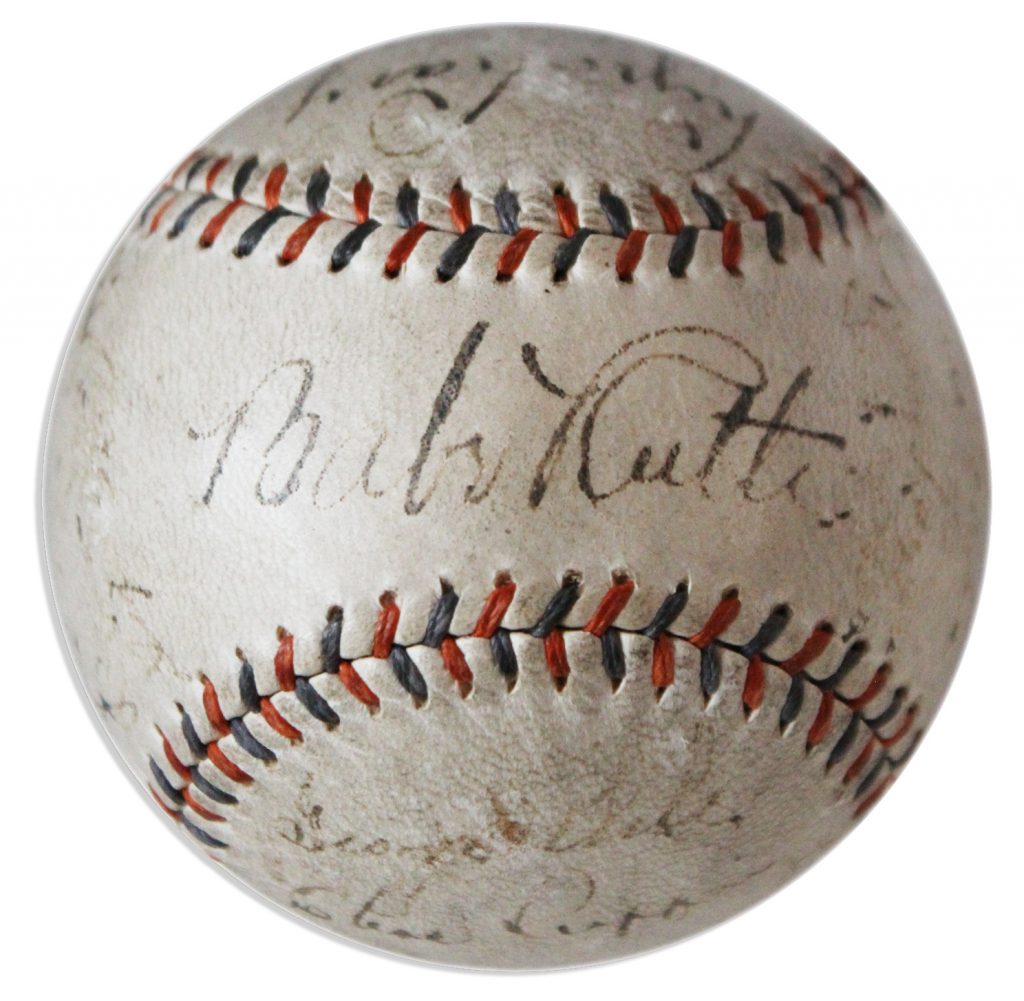