James Joyce Autograph in a Book Auctions for $14,460 at NateDSanders.com Auctions

FREE APPRAISAL. To auction, buy, consign or sell a James Joyce autograph or a letter signed for approximately $20,000, please email Nate at Nate@NateDSanders.com or phone (310) 440-2982.  Thank you.

Scarce copy of “Ulysses” rare book by James Joyce, illustrated by Henri Matisse. New York: The Limited Editions Club: 1935.  Number 297 of a limited edition run of 1500 copies.  One of only 250 such copies signed by both Joyce and Matisse.  Boldly signed by the author and illustrator on limitation page.  Full brown buckram boards with gilt embossing to front cover and backstrip.  Large octavo measures 9″ x 11.5″.  Volume runs 420pp. with an introduction by Stuart Gilbert and illustrations by Henri Matisse including 20 reproductions of preliminary drawings and six original soft-ground etchings.  In 1935 George Macy, founder of the fledgling Limited Editions Club, made the bold decision to commission Matisse to illustrate Joyce’s controversial and previously banned masterpiece, “Ulysses.”  Matisse, understanding that Joyce’s work parodied the original eighteen episodes of the “Odyssey,” chose to create his 26 full-page illustrations as actual illustrations of Homer’s original work.  Matisse later signed all 1500 of Macy’s limited edition, however, as legend has it, when Joyce realized that Matisse had been working from Homer’s “Odyssey” rather than his novel, he refused to sign any more than the 250 copies he had already signed making this double-signed edition exceedingly rare.  Rare book without original slipcase, else fine condition.  Sold for $14,460. 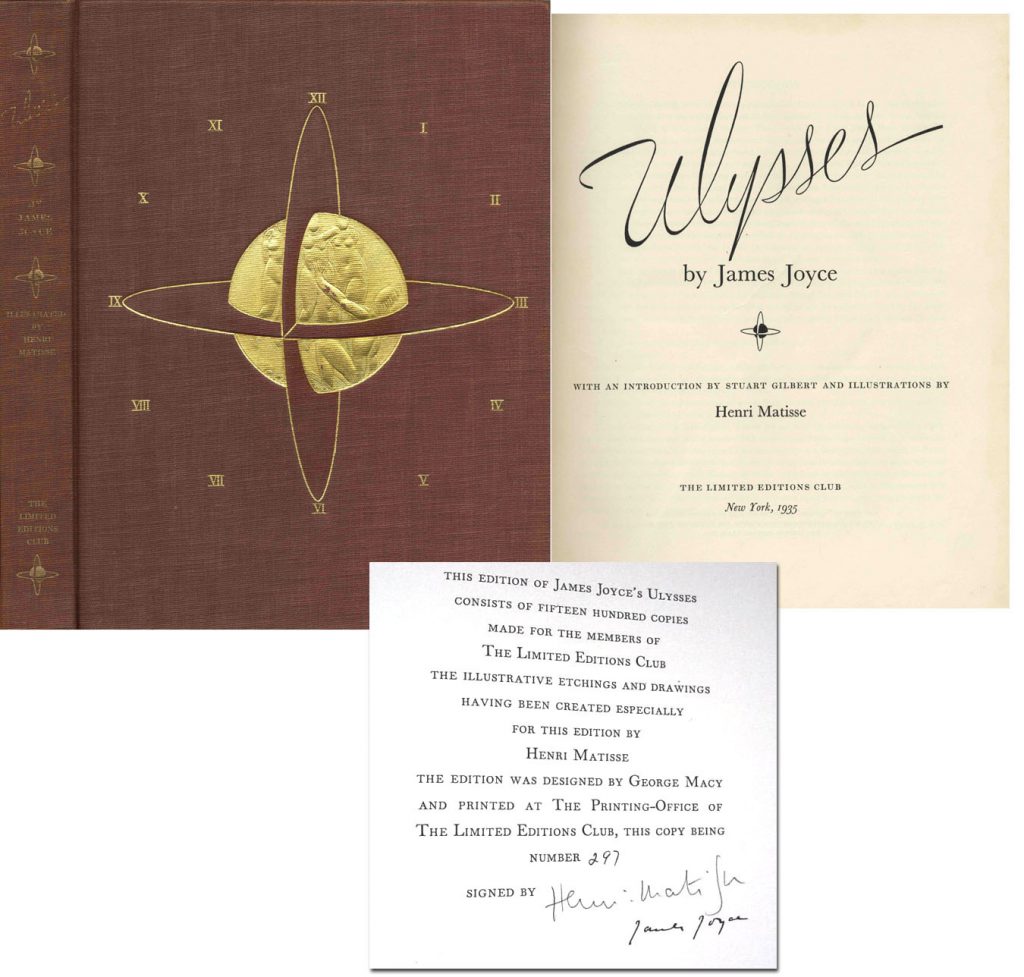 James Joyce Autograph Letter Signed in 1923, Shortly After the Publication of ”Ulysses” in 1922 — ”…I am almost going out of my mind in this impossible situation…”

James Joyce autograph letter signed to his friend, the sculptor August Suter. On Victoria Palace Hotel stationery in Paris, where Joyce lived at the time, he writes to Suter on 29 April 1924 in German, translated in full, ”Dear Mr. Suter: May I introduce to you a friend of mine from Ireland, an artist [Patrick Tuohy] who painted a portrait of my father that has been talked about quite a lot. He would very much like to meet you. I do not know how you will communicate with each other, since he does not speak German and very little French. Maybe your kind wife might be able to help? Mr. Muller is coming to see me tomorrow. / I am almost going out of my mind in this impossible situation. / Sending a handshake / James Joyce”. The impossible situation that Joyce refers to is likely Dr. Walter Muller’s attempts to find a publisher for the German translation of ”A Portrait of the Artist as a Young Man”. Single page letter on bifolium stationery measures 5.25” x 7”. Single fold and light toning, overall very good condition. Sold for $3,750. 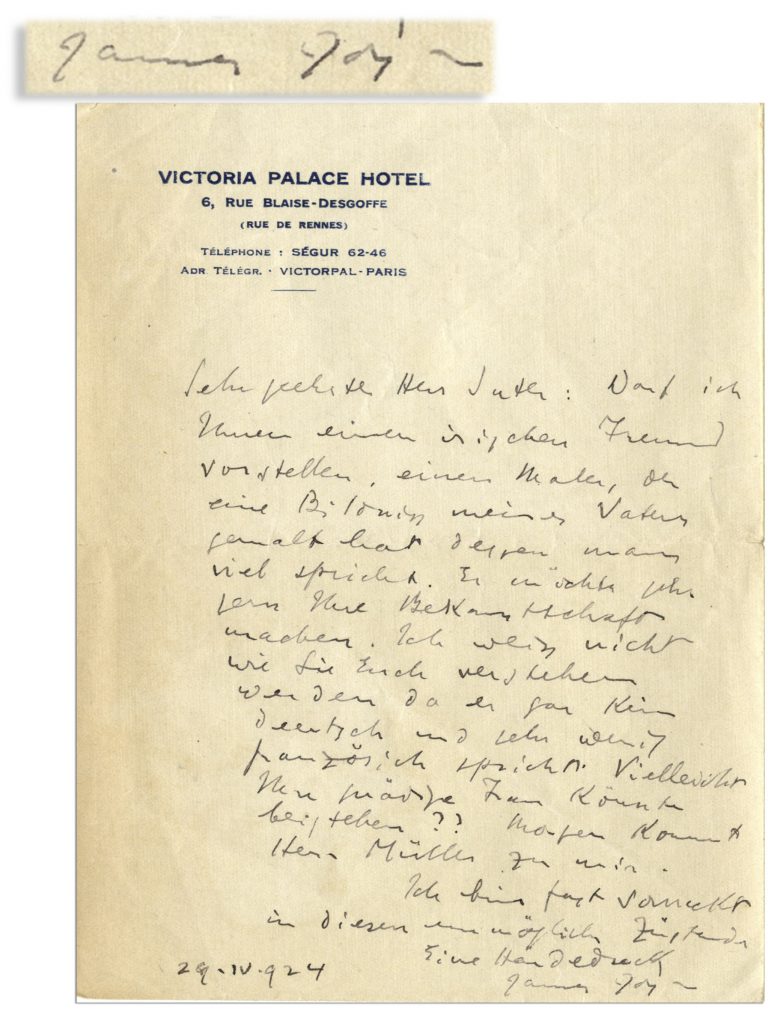 James Joyce Autograph Letter Signed in 1923, Shortly After the Publication of ”Ulysses” in 1922 — ”…I am almost going out of my mind in this impossible situation…” Click to enlarge.

James Joyce autograph letter signed to his friend, the sculptor August Suter. Written on stationery that folds to create an envelope, Joyce writes to Suter on 4 June 1923 from Paris, with corroborating postmarks on verso. In German, letter translates in full, “Dear Mr. Suter, / Unless it is inconvenient for you, I will bring you the pictures next Thursday afternoon. In the event that you might not be at home, you could telephone me, so that we will be able to set another date. / Kind regards from both of us to Mrs. Suter and to you. / James Joyce”. At this time, Joyce had just finished his magnum opus “Ulysses” and was beginning to write again, after having taken more than a year off. Letter measures 4.5″ x 6″. Fold, else near fine. Sold for $2,900. 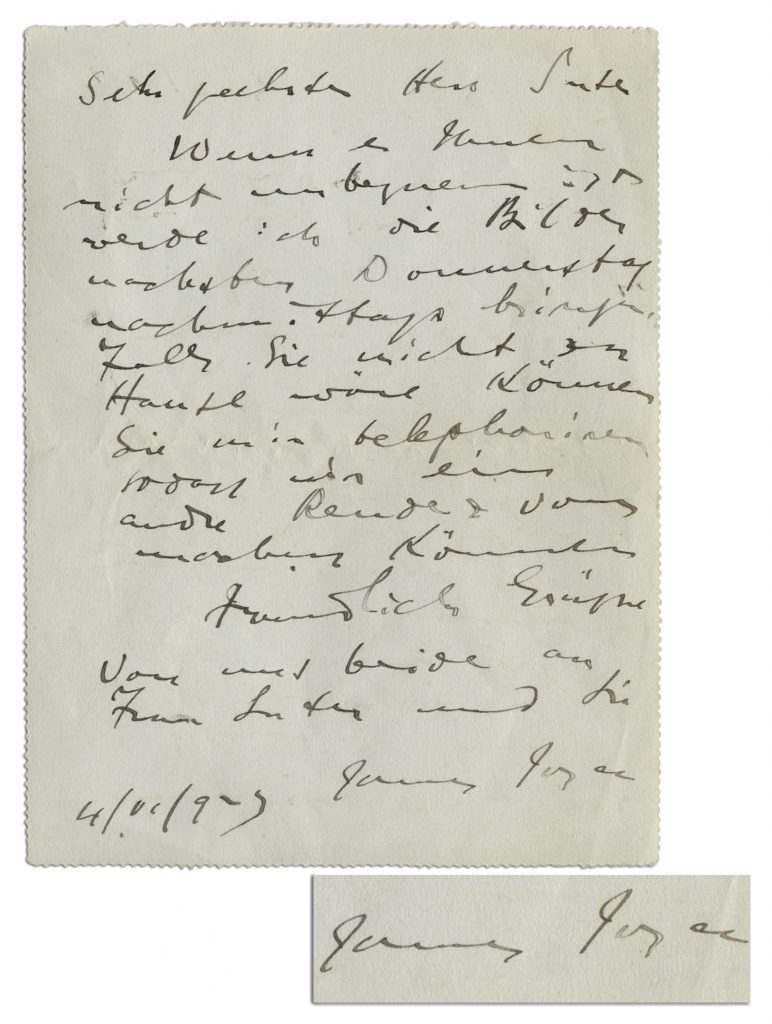 James Joyce Autograph from 1932 — Upon ”American Club of Paris” Register

James Joyce autograph on an ”American Club of Paris” guest register. Joyce finished his stream-of-consciousness masterpiece, ”Ulysses,” while living in Paris in the 1920’s. He signs an undated entry in the left column, between 17 and 24 March, ”James Joyce”. The American Club originated as the Benjamin Franklin Sunday dinners in Paris during the American Revolution, continuing with some wartime interruptions until the present. Joyce was among those who fled Paris in 1940. 10” x 8” page is beautifully matted and framed with a 3.5” x 5” image of Joyce to an overall size of 20” x 13”. Near fine.  Sold for $2,520. 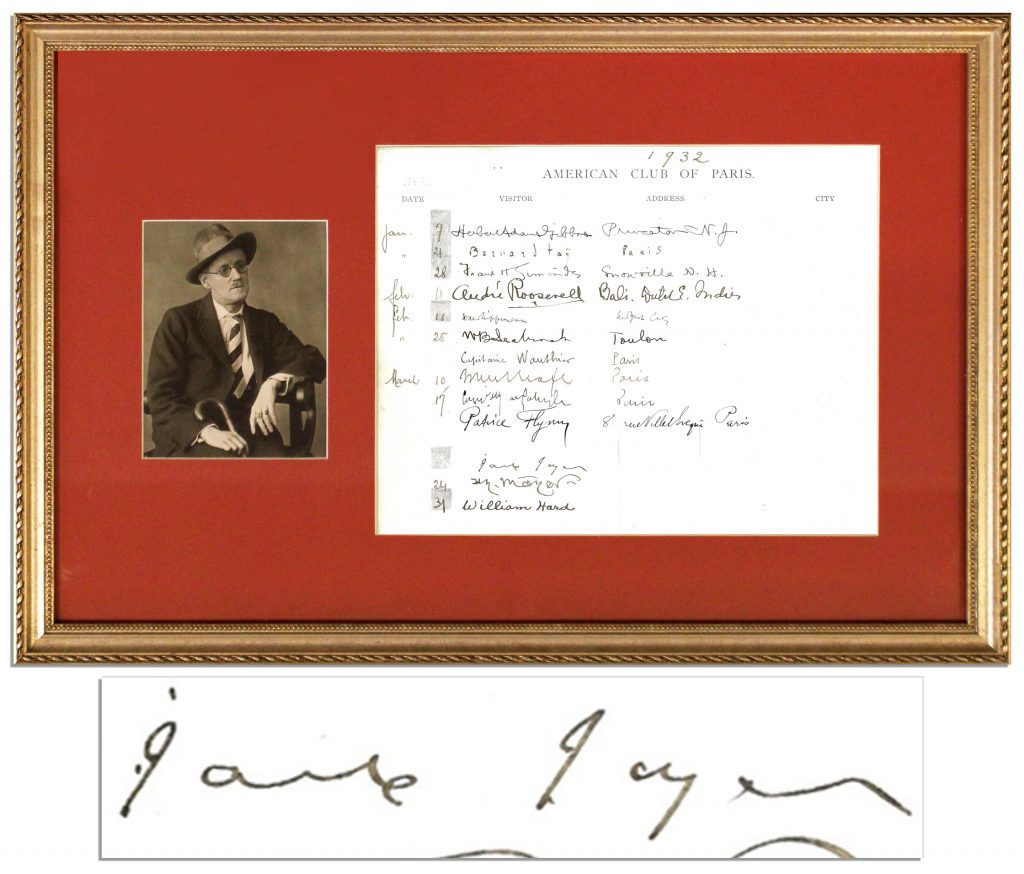