A Declaration of Independence Thomas Lynch Autograph Sold for $26,000 at Nate’s

If you would like to auction, buy, consign or sell a Thomas Lynch autograph, please email Nate@NateDSanders.com or call (310) 440-2982.

The second rarest Declaration of Independence signer’s autograph behind Button Gwinnett is a Thomas Lynch autograph, a signer from South Carolina.  We at NateDSanders.com were lucky enough to have sold his autograph in 2004.  Here is the description, picture and the price realized:

Thomas Lynch autograph book page from the 2nd rarest signer of the Declaration of Independence. Extremely rare signature which has been cut from a book. Comes with a 1-page letter, dated 1887, from Samuel Prioleau Hamilton, 6th son of South Carolina Governor James Hamilton and grand nephew of Thomas Lynch Jr. Reads in part: “…By return mail I send you the only writing of Thomas Lynch Jr. I have. It is cut out of his copy of Swift’s works published in 1764. It can not be laid to his [Declaration of Independence] signature but it is undoubtedly his writing…I sent you long since a genuine signature ‘T. Lynch jr’ but so faded by having been exposed to the water as scarcely to be read. I think with the aid of a microscope you might reproduce in ink…” Also comes with a 3-page letter from noted autograph expert Kenneth W. Rendell, dated 1966, certifying the authenticity of this signature. Reads in small part, “…I received the Lynch back today and have gather[ed] together a mass of evidence to confirm its authenticity. In comparing my signature with that on the Declaration of Independence there is a definite difference, as you point out…The first difference is in the L. In mine it is started after the downstroke and in the Declaration before it. This is a very easy alteration to make in writing. He just started it a little before he previously did…Lynch’s early writing (my signature) was much stronger, because he was…very ill when he signed the Declaration. In 1775 Lynch contracted bilious fever and became…a partial invalid. After signing the declaration he continued to get worse and he left two years later for the West Indies…He died in a ship-wreck on that voyage…In Mary Benjamin’s book, which is the leading work on autographs, she also makes reference to the problem of comparing early signatures with that on the declaration…there is no question of the serious effect that this illness had on him, and also on his writing…Beneath the facisimile Hamilton writes, “Seven signatures, mainly from school books. Long after Lynch’s death in 1779, his sister cut many signatures from books in his library to supply autograph collectors…” Mounted to another sheet, with the Hamilton letter laid beneath it. Very good condition.  An excellent Thomas Lynch autograph.  Sold for $26,000. 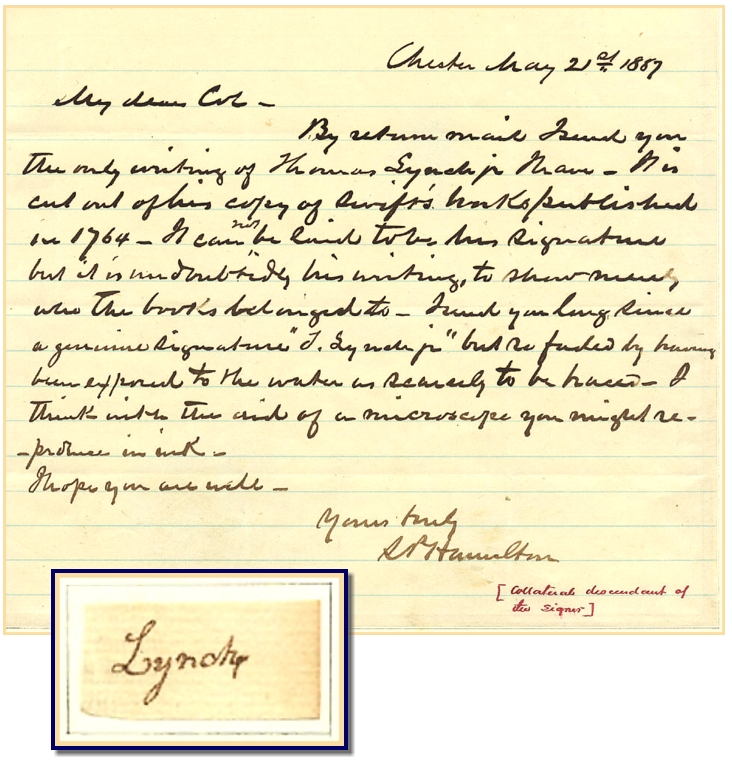 Thomas Lynch Jr. signed book page from the 2nd rarest signer of the Declaration of Independence.

If you would like to auction, buy, consign or sell a Thomas Lynch autograph, please email Nate@NateDSanders.com or call (310) 440-2982.