General Stonewall Jackson Autograph Letter Signed — Scarce Letter Written in 1863, Two Months Before His Death — ”…to ever dwell in the presence of God, where no sin can enter…”

Thomas Stonewall’ Jackson autograph letter signed ”T.J. Jackson”, datelined 2 March 1863 from Caroline County, Virginia where the General kept his winter headquarters at Moss Neck Manor. Two months after this letter was written, Jackson was accidentally shot late at night during the Battle of Chancellorsville, reportedly mistaken by North Carolina 18th Infantrymen for Union cavalry soldiers. Letter is addressed to his former sister-in-law, Margaret Junkin Preston, an author and poet. His first wife, Ellie Junkin, had died nine years prior to this letter from complications during childbirth. Letter is personal with religious undertones, as Jackson was a devout Presbyterian, discussing his deceased wife, as well as the birth of his new daughter from second wife, Mary Anna Morrison. Reads in full: ”My Dear Maggie, Your very welcome letter with that for Julia has been received. I will give special attention to seeing that hers is forwarded. The aging of our dear Ellie, no mortal can estimate: but of one thing we are assured – she is one of the happy throng of the redeemed, which I hope that you and I will at God’s own time be privileged to join. What a blessed thought! To be with the just made perfect, where there are songs of everlasting rejoicing. To be with the celestial host, to ever dwell in the presence of God, where no sin can enter, where only happiness exists. To be like unto the glorified Redeemer. To love what eye hath not seen nor ear heard, neither have entered into the heart of man to conceive. When we think upon these things truly the cup of blessedness runs over. I am much obliged to you for your congratulations. Anna writes very cheering accounts of the little darling. Your affectionate brother…” 2pp. letter measures 5” x 7.75” on a single sheet of ruled stationery, with an uneven left edge, some show-through of ink and very slight smudge to Jackson’s signature. Also includes a portrait postcard of Jackson measuring 4” x 6” by William Garl Brown for framing. Very good to near fine condition.  Sold for $14,351. 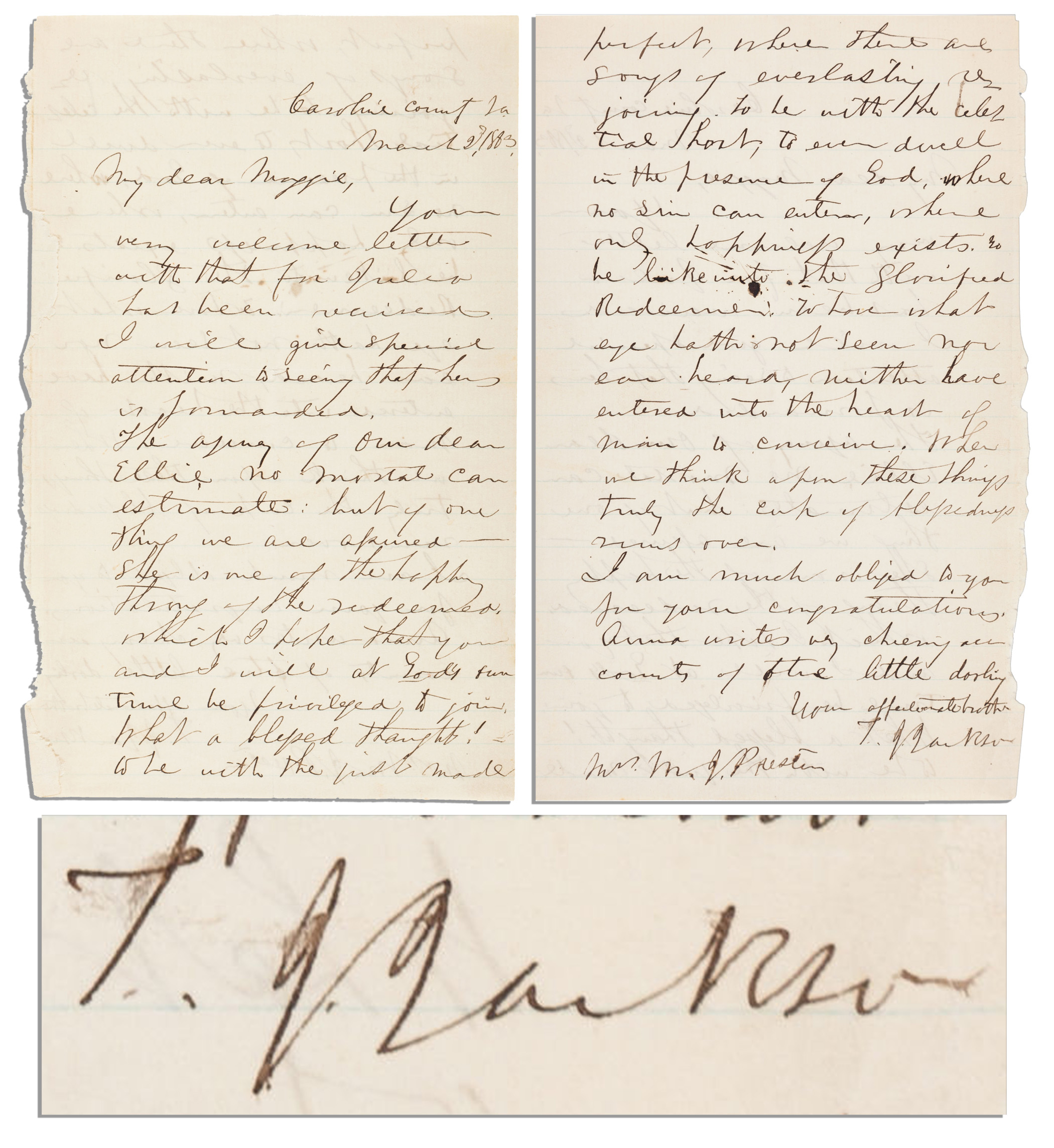 General Stonewall Jackson Autograph Letter Signed — Scarce Letter Written in 1863, Two Months Before His Death — ”…to ever dwell in the presence of God, where no sin can enter…”