Battle of Shiloh Letter Lot Sells for $14,100 at NateDSanders.com Auctions

FREE APPRAISAL. To auction, buy, consign or sell a Battle of Shiloh letter or any other Civil War letter, please see http://www.NateDSanders.com, contact Nate@NateDSanders.com or call (310) 440-2982.

Comprehensive Civil War lot from estate of a Shiloh officer and author Major D.W. Reed. Includes 42 autographed letters signed from the Battle of Shiloh letter lot, written by Reed from August 1862 to November 1864; a book on Reed’s unit, the 12th Iowa Veteran Volunteers, authored by Reed and inscribed to his daughter; two 1900, 25″ x 20″ maps of the Shiloh Battlefield; two CDVs of Reed and one CDV of his wife; and a quatro-size tintype of Manson’s brother, James W. Manson, a soldier killed in action, housed in a full case with fastening latch and design of figure on American flagpole on case’s cover. Reed, dubbed the “Father of Shiloh National Military Park,” served in the CW and was instrumental in the years after the war in documenting both the Shiloh Battlefield and the 12th IA’s experiences. A letter, datelined “Camp Sherman, Bear Creek, August 5th 1863,” reads in part: “I suppose that it came here to Vicksburg while our Reg. was out to Jackson followed us there and out to Branson then back here again before it would overtake us but thanks to the kind fortunes that brought it around at last The 5th is here at Vicksburg I have not seen them since we were out as Jackson shall go into the city in a day or two and if he is there will see him” Another letter, datelined “Camp 12th Iowa Regt. Inf. Vols. Bear Creek, Miss. September 26st, 1863,” reads, “Last night I was a Pickett I went entirely alone and is was realy a relief upon such a pleasant evening to get out entirely away from this hum of the camp and take a walk of a mile or more in the stillness of the night without interruption and I might have been tempted to have prolonged my walkt but I was suddenly brought to a standing ‘halt’ from behind a clump of bushes where he was entirely concealed from view. His next question ‘Who goes there’ being answered ‘friend with the countersign’ he orders ‘advance and give the countersign’ which being given to him over its permit of his bayonet I am allowed to pass and inflict the guard finding all doing their duty. I can return to my post and feel perfectly safe and easy though gurrilla are known to be prowling around The 1st 2nd and 4th Divisions of our Corps are ordered to Chattanooga Tenn. Our Div. has no orders at present can not tell what will be done with us. We may follow our lead or may stay here. We have to wait orders and then ask no questions but pack up and start” Post-war, Reed was Shiloh National Military Park’s first secretary and historian, and was instrumental in the early history of the memorial park. Maps have some wear and tear along creases; all items in good to very good condition. Most letters run about 4pp. and measure 7.75″ x 10.” An excellent Battle of Shiloh letter lot.  Sold for $14,100. 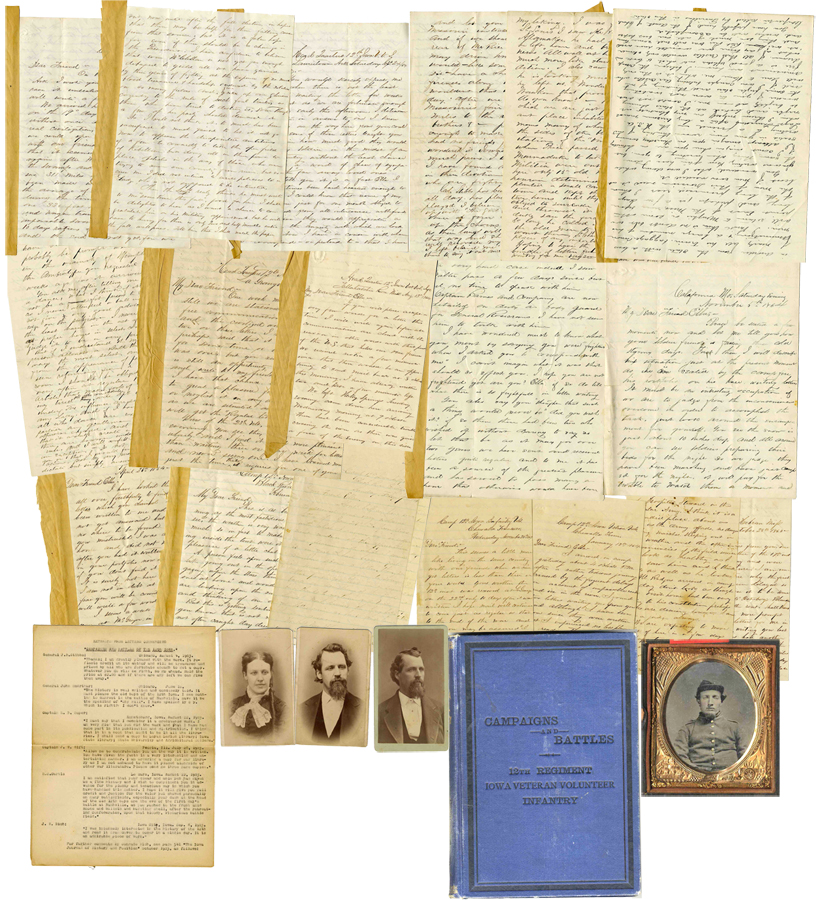 Stellar 7pp. Battle of  Shiloh letter report by Confederate Marshall J. Smith of the Louisiana Crescent Regiment, datelined “Camp McPheeters, 14 April 1862.” Addressed to Col. Preston Pond, Jr., Commanding 3rd Brigade, Ruggles Division. Reads in part, “Colonel, I submit herewith a report of the operations of my regiment on the 6th and 7th inst’s in the Battle of Shiloh, near [Pittsburg Landing, TN]. In obedience to your order on the morning of the 6th, I took position with my regiment on the right of Colonel Sowney’s 38th TN Regiment resting on Owl Creek to guard the road leading to the enemy’s camp We remained in this position until we received orders to come immediately to the front. We moved both Regiments by the right flank rapidly forward Advancing 300 yards further through open woods raked by shell from the enemy batteries, we came up with Generals Polk, Ruggles and Anderson. The enemy’s battery sustained by Sharp Shooters occupied a hill to the right of an open field I found the fire so heavy General Polk took position in front of the enemy who retreating, had taken position behind fences and houses to secure themselves we opened a heavy fire upon them when the surrender of a large number took place. I received the swords of many I was ordered to receive the surrender by General Polk A flag was surrendered but being engaged in advancing the enemy, I lost sight of it. The enemy again formed line of battle in the woods After being shelled the enemy broke, retreating towards Pittsburg the gun boats opened a most atrocious fire, which we endured We then advanced, covering the movement of the artillery The enemy being again reinforced, after having been driven back in order to prevent being flanked, we were forced to retire my regiment rallying again, charged the enemy we drove the enemy into a wheat field When finding them supported by 2 regiments in ambush, we retired Four times thus we drove the enemy back every time coming upon us with fresh troops My men were exhausted We left the field of battle of a half mile in advance of the point where we commenced the fight I am, Col Marshall J. Smith, Col. Crescent Regiment.” The Crescent LA Infantry Regiment entered Confederate service in May 1861. The unit fought at Shiloh, where 23 of their men were killed, 84 wounded, and 20 reported missing. By Summer 1863, the Confederate Guards Response Battalion and the 11th LA Infantry Battalion were folded into the Crescent, which engaged in operations against Banks’ Red River Campaign. Sepia ink letter on blue-grey stationery measures 8″ x 12″. Light stains, mild toning, overall very good condition.  A superb Battle of Shiloh letter report.  Sold for $8,813. 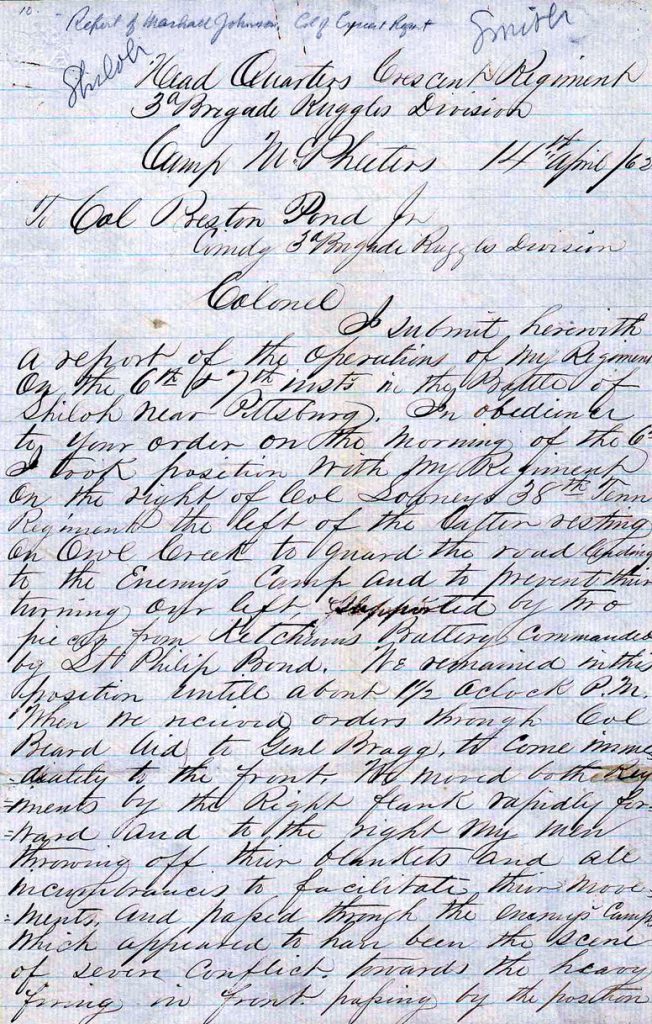 1862 Battle of Shiloh letter handwritten by Confederate General Daniel Ruggles and sent to Major General Braxton Bragg. Dated at top in pencil “March 15, 1862”. Composed while Western armies maneuvered prior to Shiloh. Reads in full, “Maj. Gen. Bragg, Gen’l. Gladden reported yesterday but one bridge destroyed – today I have not been able to hear from him. I have four trains at Bethel and I tried to get them back and as they did not come down at 12 1/2 p.m. I sent a hand car to ascertain the cause of detention – it has not yet returned (9 p.m.) and no news has been received by expressmen. The rain has fallen in torrents. I have been obliged to halt a company of cavalry and two batteries of guns already considerably advanced on the road to Purdy. I have been ready to move with a strong force all day, but could not do so until the condition of things could be ascertained. The telegraph would not work and I could not answer your questions” Ruggles, twice brevetted in the Mexican War, commanded a Shiloh division. Single-page letter, measuring 8″ x 10″, handwritten in elegant dark sepia. Absolutely no flaws save for the lightest coat of toning at lefthand edge. Very clean letter on bright paper. This Battle of Shiloh letter between senior officers is in pristine condition.  Sold for $4,700. 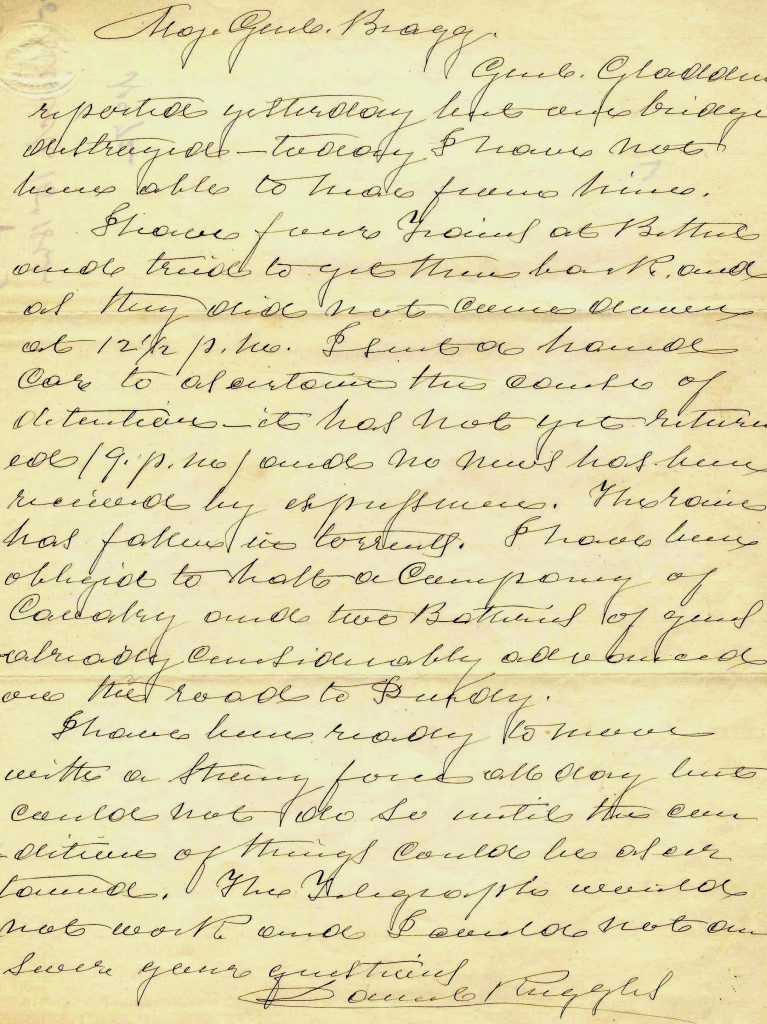 FREE APPRAISAL. To auction, buy, consign or sell a Battle of Shiloh letter or any other Civil War letter, please see http://www.NateDSanders.com, contact Nate@NateDSanders.com or call (310) 440-2982.

Nate D. Sanders Auctions offers the following services for a Battle of Shiloh Letter or any other Civil War letter: