Presidential Briefcase & Royal Briefcase Cache Sell for Over $100,000 at NateDSanders.com

There is always a demand for Presidential and Royal memorabilia. We have sold all types of this kind of memorabilia, including briefcases owned and used by various Presidents and Kings.

Take a look at some of our prices realized: 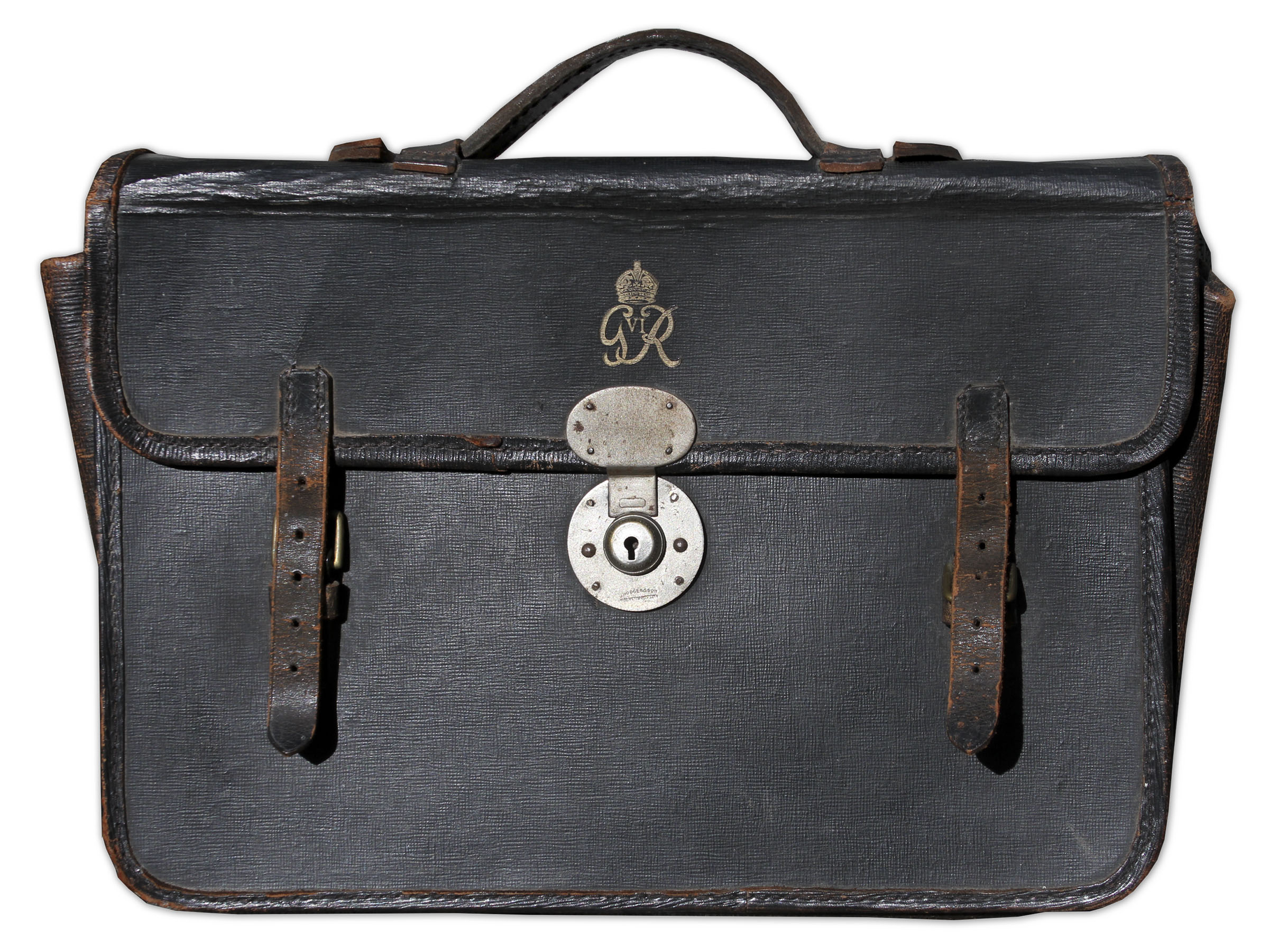 King George VI’s personal attache case, given to Douglas Fairbanks Jr. in 1949 when Fairbanks was made an Honorary Knight Commander of the Order of the British Empire (KBE) for his service in WWII. The American actor had been assigned to the staff of Lord Mountbatten’s Commando Unit in England. Darkly-tanned leather bag features George VI’s royal cipher printed in gilt on the flap above the metal lock. George VI ascended the throne in December of 1936 following his brother’s abdication; his calm demeanor reportedly gave the English people strength and courage during WWII. Attache case measures 15.75″ across, 11″ tall and pleated sides allow it to expand to 3″ deep. Shows wear from use. In very good condition. Included is a black and white glossy press release photo of the King and Royal family at Prince William Henry’s christening. In very good condition, measuring 9″ x 7″ and backstamped 12 March 1942.  Sold for $14,351. 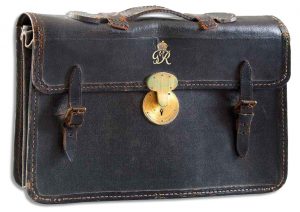 Lyndon B. Johnson’s own tan cowhide briefcase with LBJ’s initials embossed in gold below the lock. One of the greatest political powerhouses of the 20th century, Johnson served in all of the highest-ranking elected offices: Congressman, Senator, Vice President and President. Briefcase measures 17.5″ x 14″. Key not included. In handsome, fine condition, with provenance from President Johnson’s daughter. Sold for $18,678. 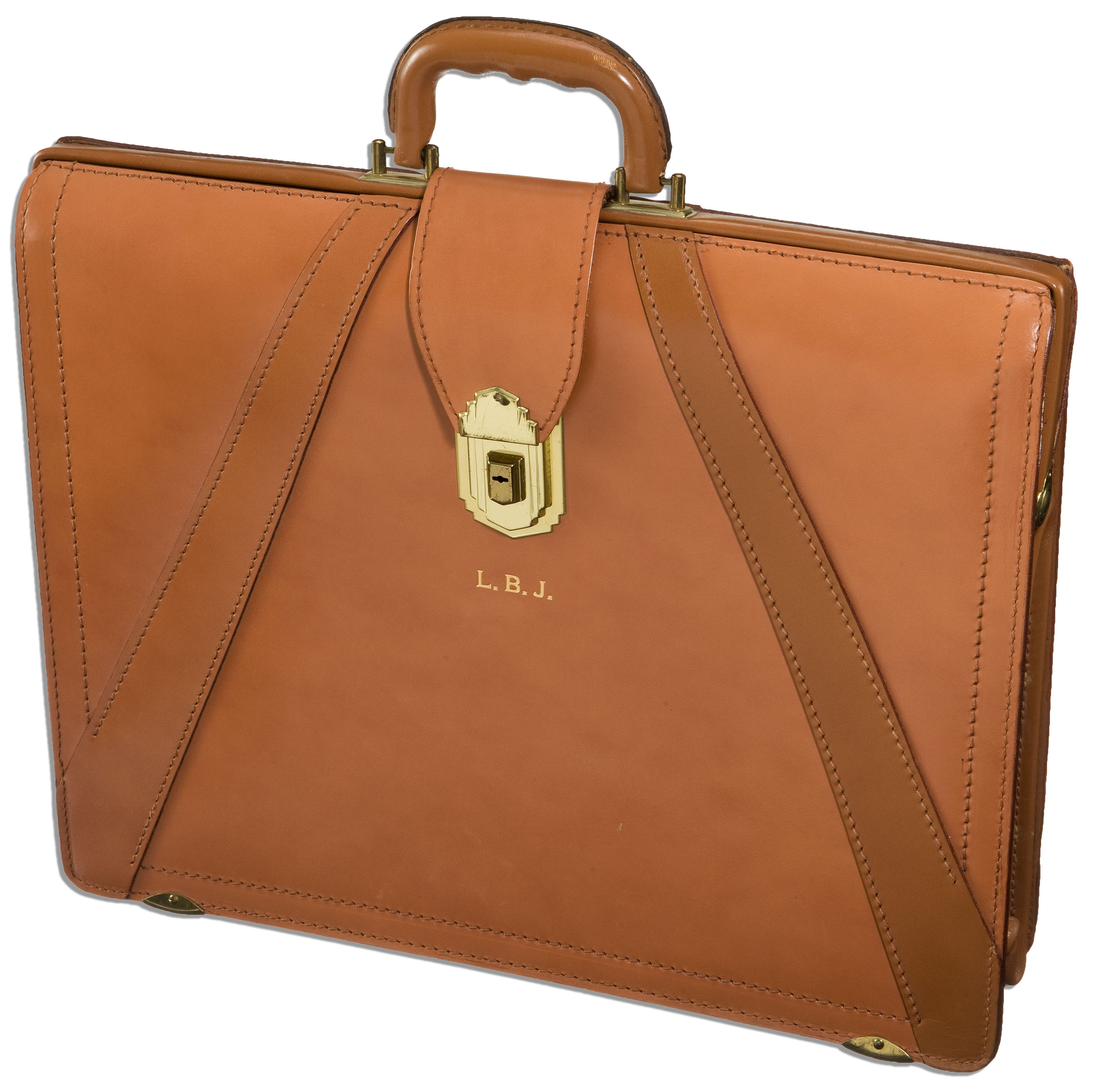 Briefcase owned and used by Richard Nixon as Vice President, containing a typed letter signed by Nixon not long after he resigned from office. Brick red leather briefcase shows plenty of signs of use and has Nixon’s name and title printed in gilt; ”Richard Nixon / Vice President of U.S.A.” Nixon served as Vice President under Eisenhower, from 1953-1961. Briefcase opens to reveal a typed letter signed ”RN” on Nixon’s personal stationery to Alvin Moscow, the head researcher for Nixon’s book, ”Six Crises,” to whom he gifted this briefcase after their collaboration on the book. Dated 6 January 1975, letter reads in full, ”Dear Al, I want you to know how deeply I appreciate the thoughtful message you sent to me after I left office and returned to California. We have passed through a very difficult period, but it is at such times that one learns who his real friends are; I am proud to number you among them. When I recover my health, you can be sure that in the years ahead I shall continue to work for those great goals to which we were dedicated in the years I served as President – peace for all mankind and prosperity and progress for every American. Pat joins me in sending our very best wishes.” Nixon adds a sentimental autograph note to the bottom: ”It is hard to realize that almost 14 years have passed since we worked on Six Crises -”. Included in the lot is a copy of a newspaper article on the fire that caused Nixon and Moscow to be evacuated from Nixon’s rented home in Brentwood while they were nearing completion on the book. Also included is a 10” x 8” photo of Nixon standing before a home that was destroyed in the same fire, with Moscow’s autograph caption signed to verso. Briefcase interior has address labels affixed bearing Moscow’s name. Briefcase shows heavy use by Nixon, with surface abrasions and loss of material to corners. Accompanied by a copy of a COA from Moscow. Sold for $17,365.

Franklin D. Roosevelt’s personally owned portfolio-style briefcase used by the President in the late 1930’s. Black leather zippered portfolio is printed with his initials F.D.R. in gilt on the front. Accompanied by several pages of original contents from the time it was auctioned by the Roosevelt family: five typed sheets concerning FDR’s election campaign, hand-dated 2 May 1938. The pages contain excerpts from Senator Sheridan Downey’s speeches for Roosevelt’s reelection as well as statements by William J. McAddo who opposed Roosevelt seeking a third term. Also included are copies of correspondence between Roosevelt’s son James and the auction winner of the briefcase. Portfolio measures 15.75” x 11.25”. Zipper runs along two of the sides, leaving the left side open. A divider is built in. Very good, with scratches and surface loss to the corners and edges. Sold for $17,365.

Original black cowhide briefcase owned by President Gerald Ford. Briefcase with silver buckles has an ornate gold-stamped inscription on top reading ”Hon. Gerald R. Ford”. Includes a signed LOA from his son, Steve Ford. Briefcase measures 18” x 12” and is 4.5” deep with some minor wear, else near fine condition. Sold for $8,908. 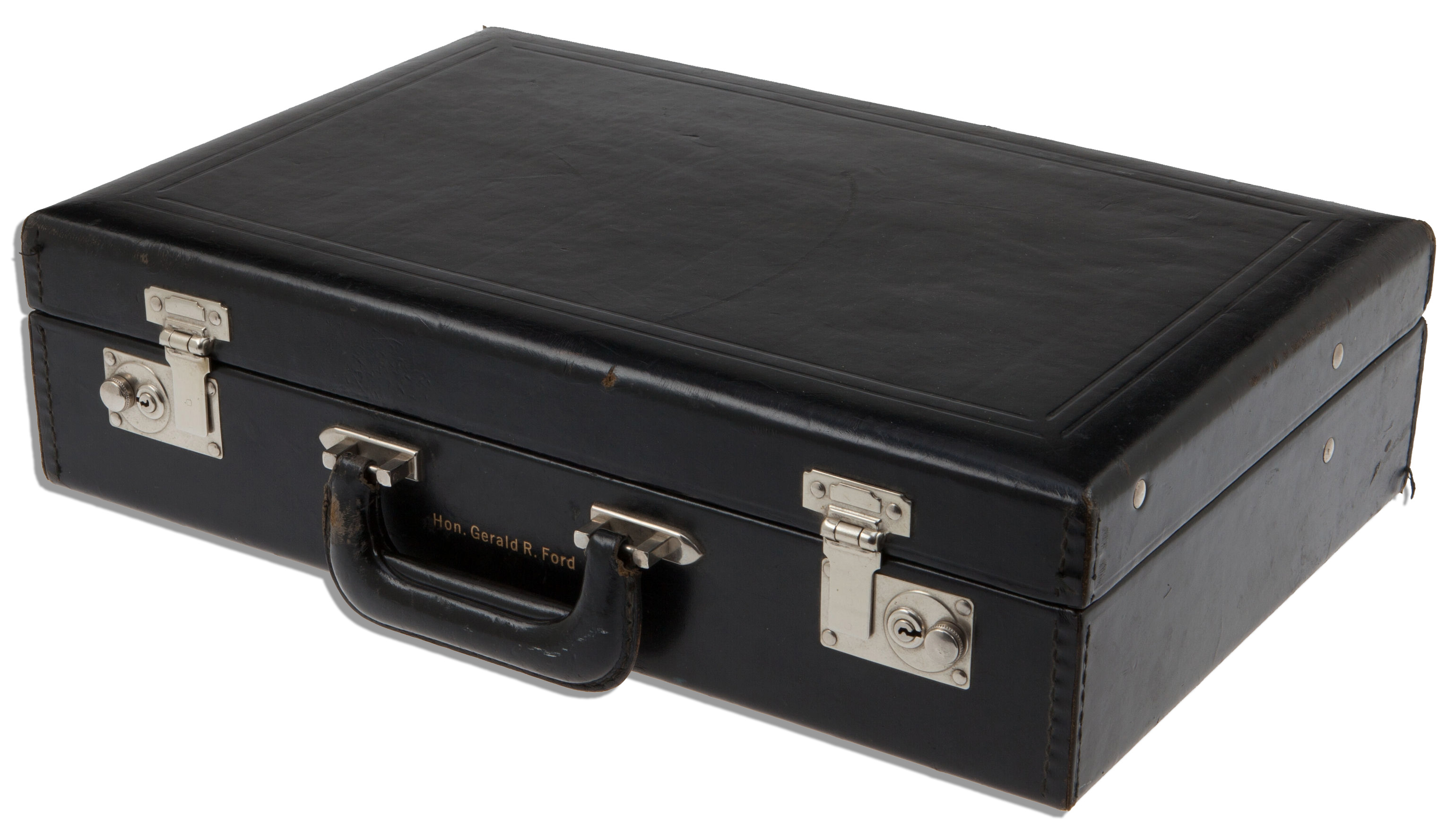 Gerald Ford’s personally owned and used briefcase. Black briefcase is stamped, “Gerald R. Ford” in silver lettering beneath a combination lock. Cowhide case measures 18″ x 12″ x 4.5″. Some scuffing to edges from use, else near fine. From the Gerald Ford estate and with an COA from his son, Steve Ford. Sold for $8,711. 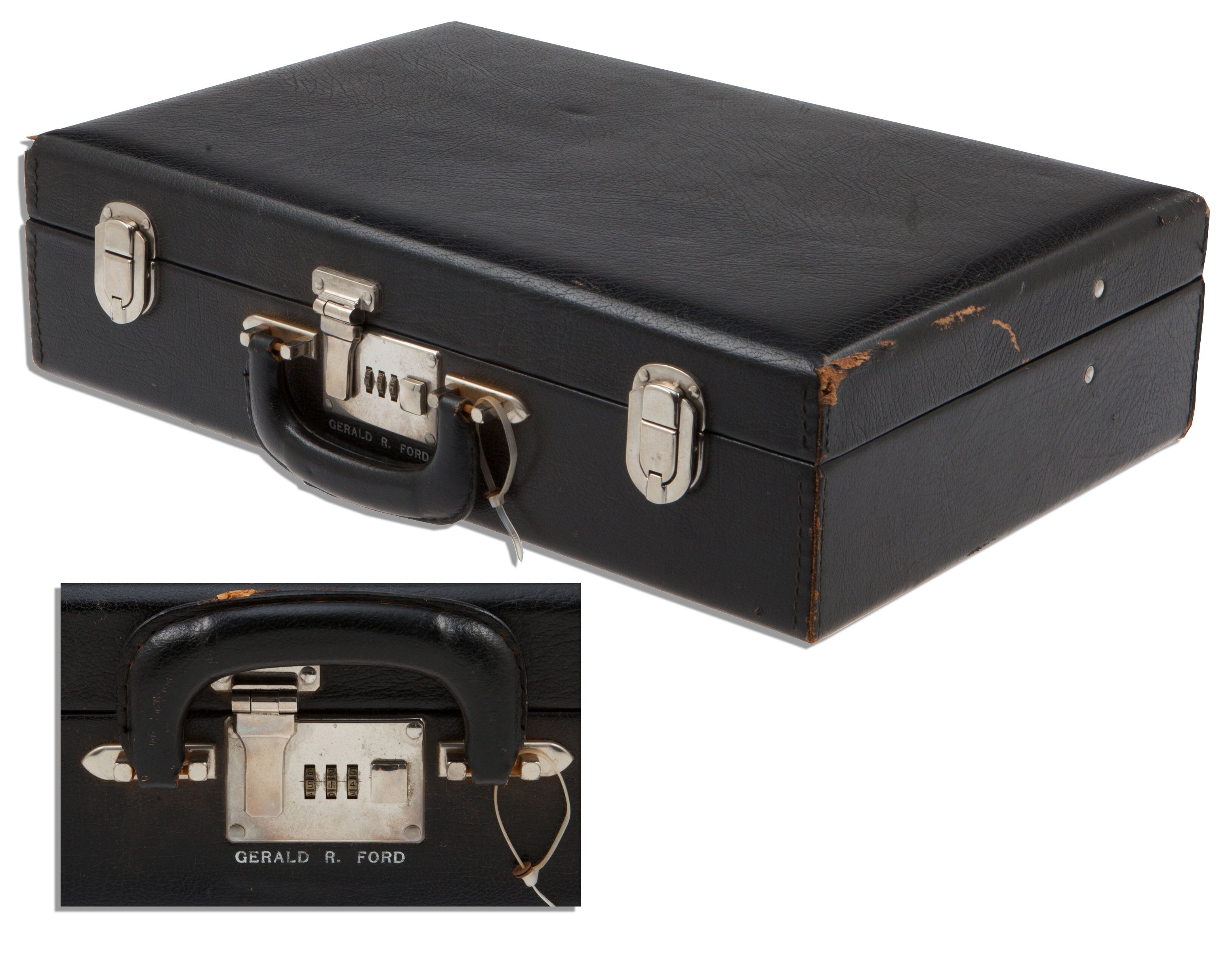