If you would like to auction, buy, consign or sell a Pope autograph, please email Nate@NateDSanders.com or call (310) 440-2982.

Beautiful Papal copy of ”Lumen Fidei”, signed by its author, Pope Francis. Published by the Vatican Press in 2013, it is the first encyclical of Pope Francis’ papacy. In ”Lumen Fidei”, Pope Francis finishes the encyclical started by his predecessor Pope Benedict, who began writing on the history and nature of faith, including the mutually inclusive notions of faith and reason, and the importance of faith in building a moral society. Pope Francis writes in the encyclical, ”…A light this powerful cannot come from ourselves but from a more primordial source: in a word, it must come from God. Faith is born of an encounter with the living God who calls us and reveals his love, a love which precedes us and upon which we can lean for security and for building our lives. Transformed by this love, we gain fresh vision, new eyes to see; we realize that it contains a great promise of fulfillment, and that a vision of the future opens up before us…” Pope Francis signs the title page, ”Francisco” above the embossed stamp of the Pope’s personal secretary. Stunning garnet-colored hardcover book measures 5.25” x 9.25” and runs 84 pages, with a garnet ribboned bookmark. Accompanied by an LOA from the Vatican Secretary of State, Cardinal Pietro Parolin, detailing the book’s donation to help raise funds for the Servite Order ”Servants of Mary” work in Uganda. In exquisite, near fine condition.  Sold for $4,688. 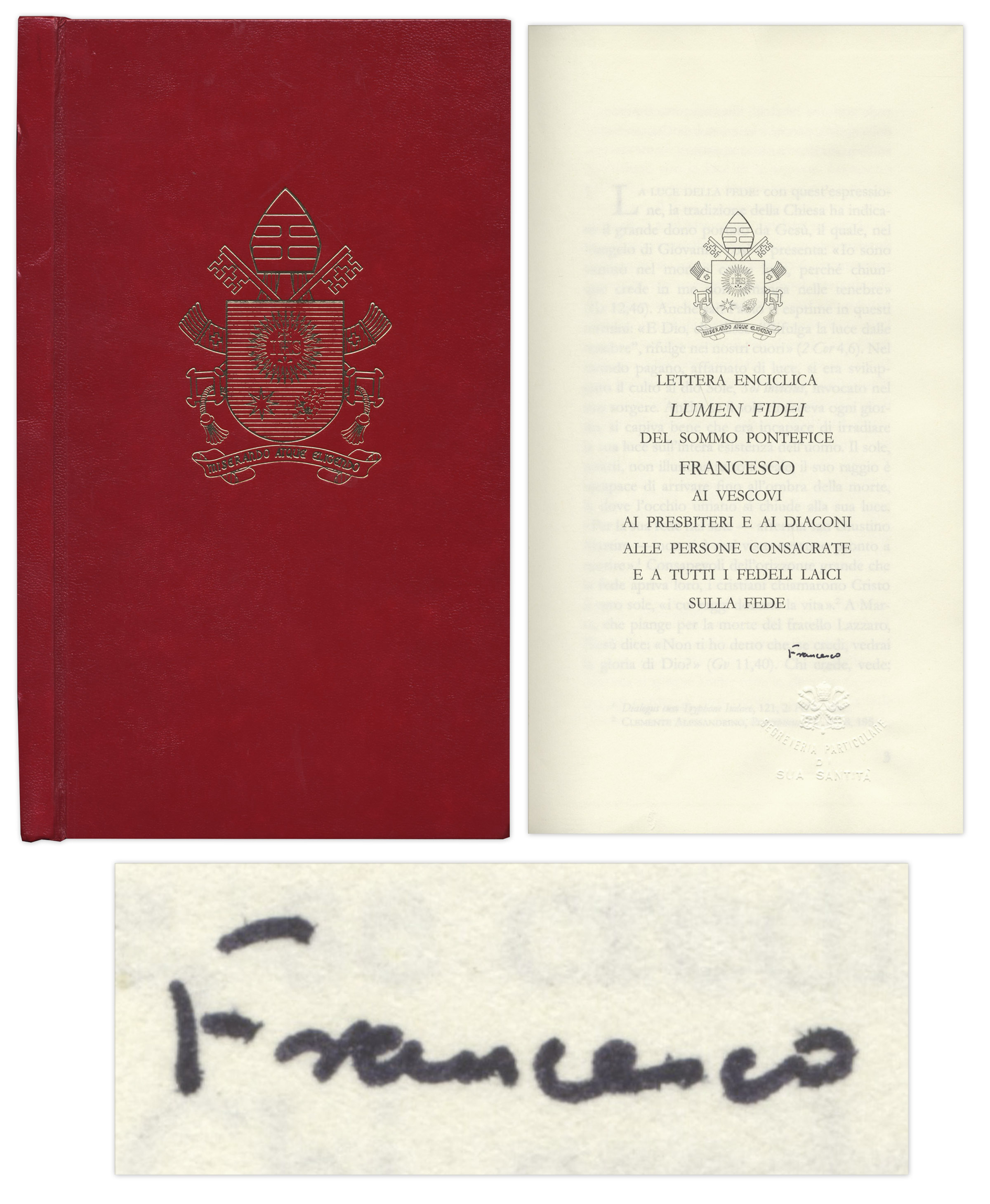 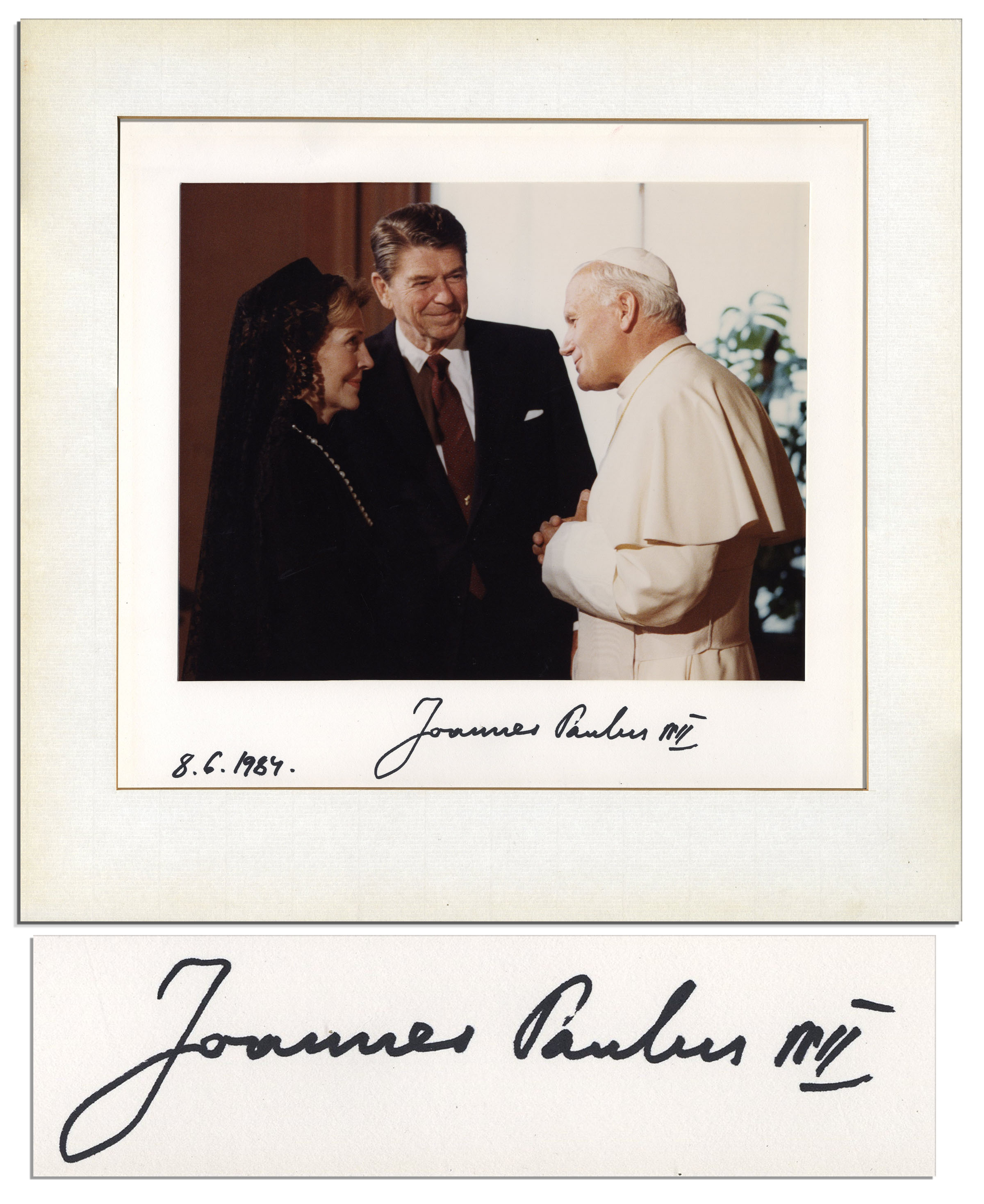 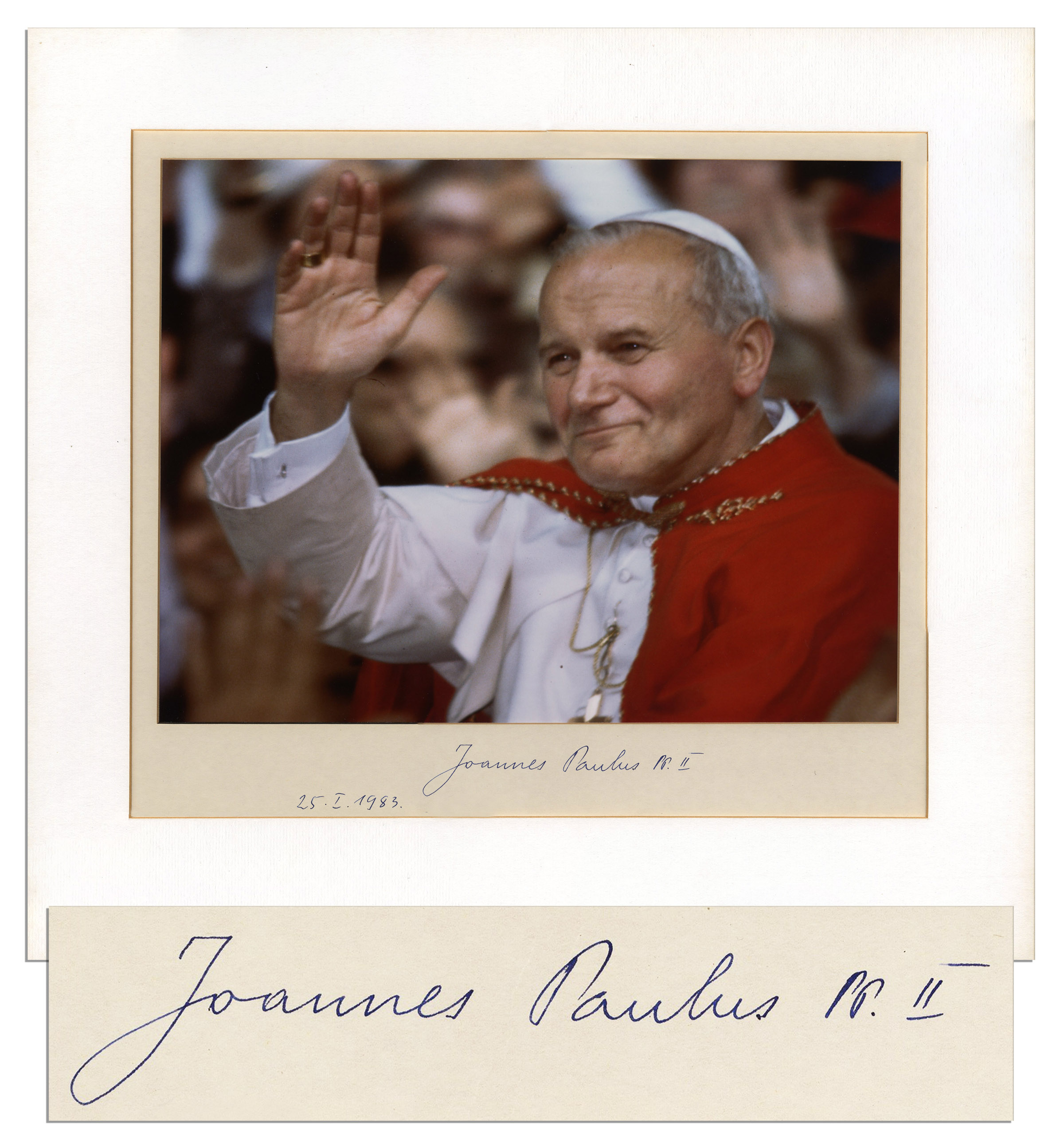 Pope autograph of Pius XI on his letter signed, ”Achille Ratti” as a Cardinal. Letter issues a pass to refuse to fight in WWI. Datelined Rome in 1917, letter is written on Vatican stationery presumably in Italian. Pius XI was the first sovereign of Vatican City. Single-page letter features a date stamp from the Biblioteca Apostolica Vaticana. Fragile sheet measures 8.5” x 10.75”. Toning, wormhole near signature and scattered minor tears, else very good.  Sold for $2,680. 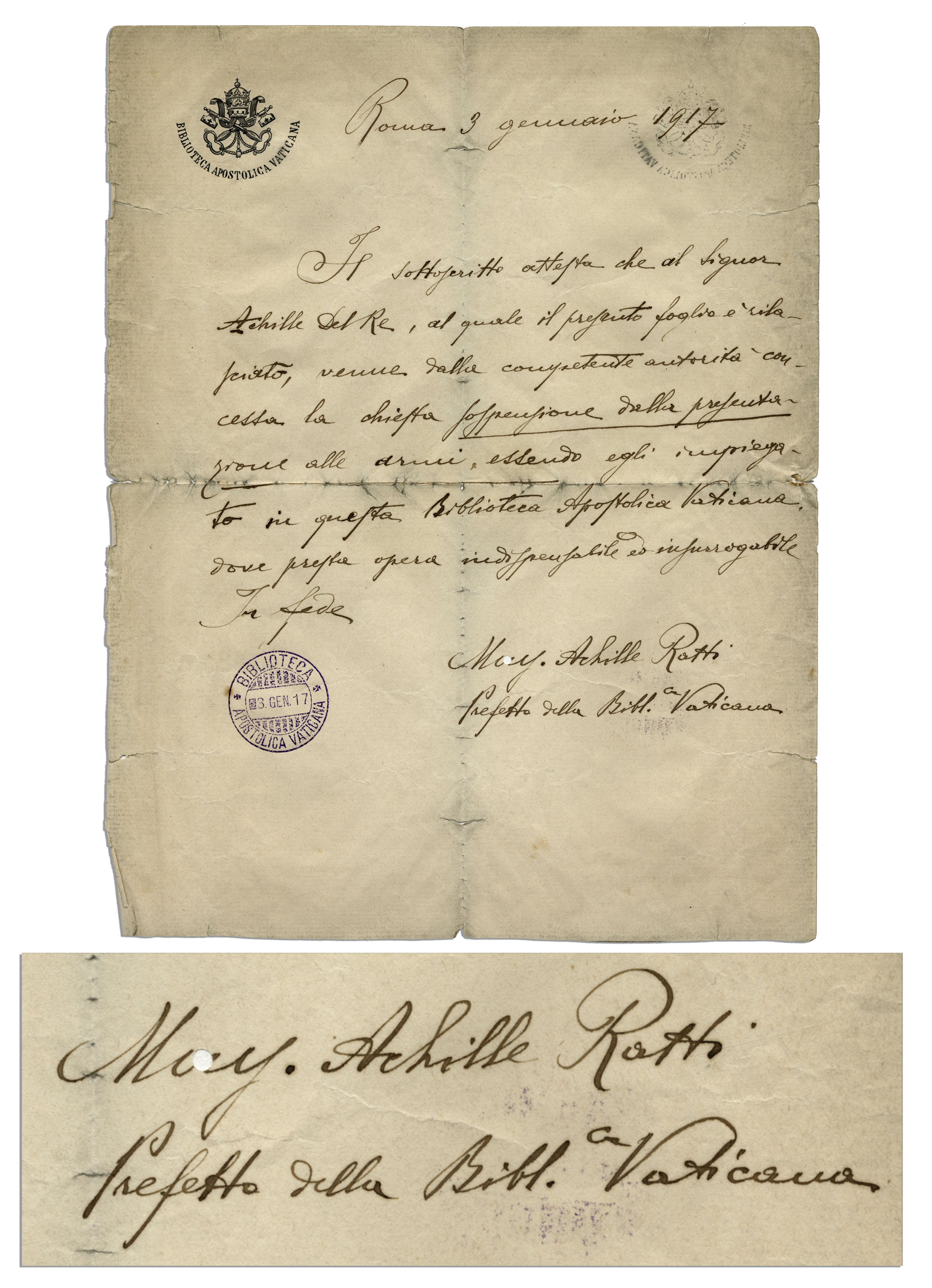 Period manuscript copy of Pope Clement VIII’s letter to the General Inquisitor of Spain, with forceful content regarding the Inquisition. Dated 1597, document in Latin translates in part, ”Pope Clemens VIII to the General Inquisitor of Spain, Peter the Bishop of Corduba…Since there is nothing more suitable to kings and princes than professing the true faith, King Phillip of Spain, recently converted some moors, yet many of them, especially in Valencia, even though having been baptized, still secretly profess and practice their former religion, and follow the errors of Mohamed. Following his former predecessors in going against apostasy and heresy, Clemens VIII asks the bishop, in order to better strengthen the faith of the newly converted, to enforce greater punishments upon them, and to cut off the lethal cult at its roots, by even appointing more inquisitors, and converting the moors, their children, and nephews, by oath and confirmation…” Runs 7pp. on 5 sheets, with one sheet blank save for a small notation to upper left. Measures 8.5 x 10.5”. Toning and bleeding to ink, else near fine.  Sold for $1,875. 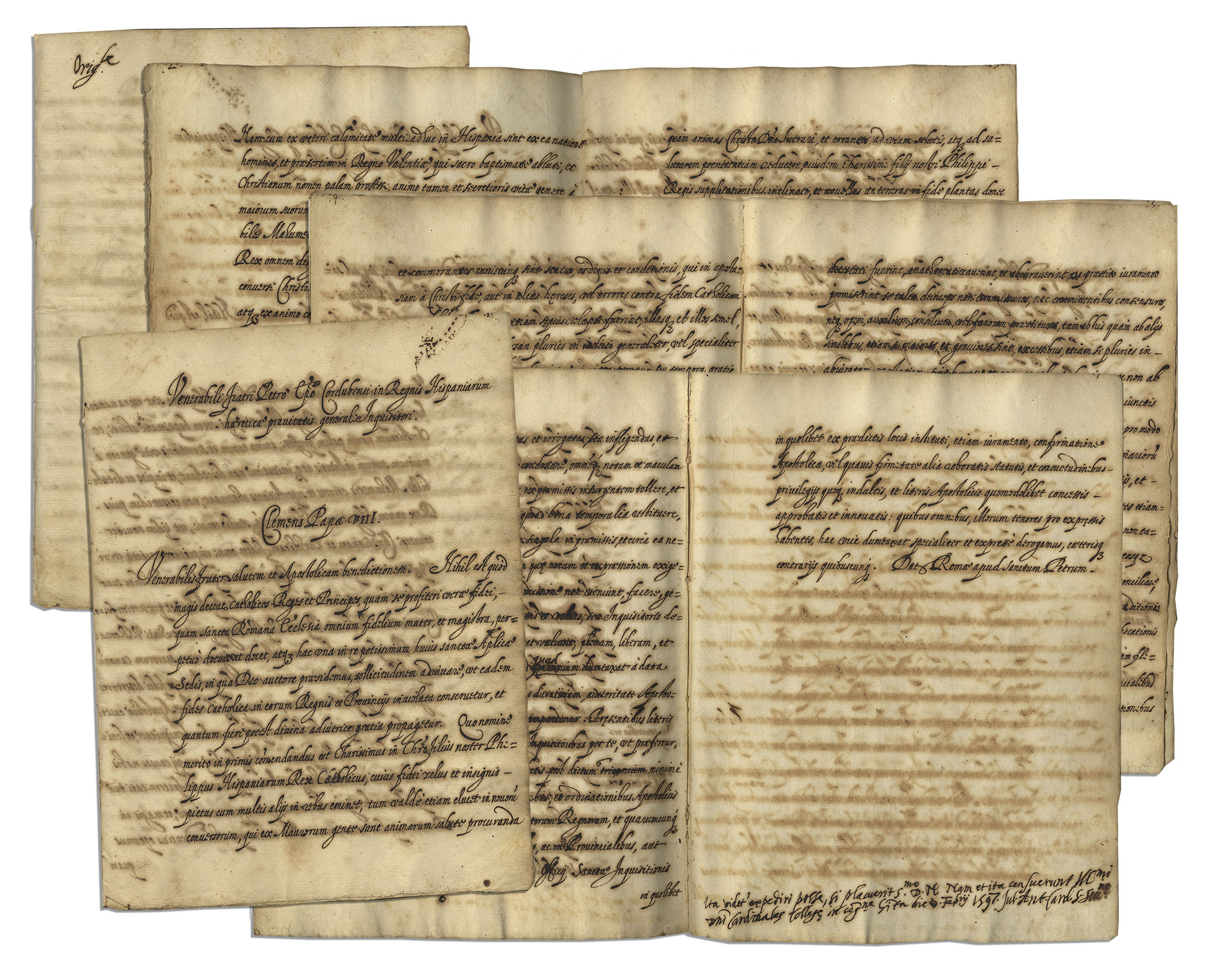 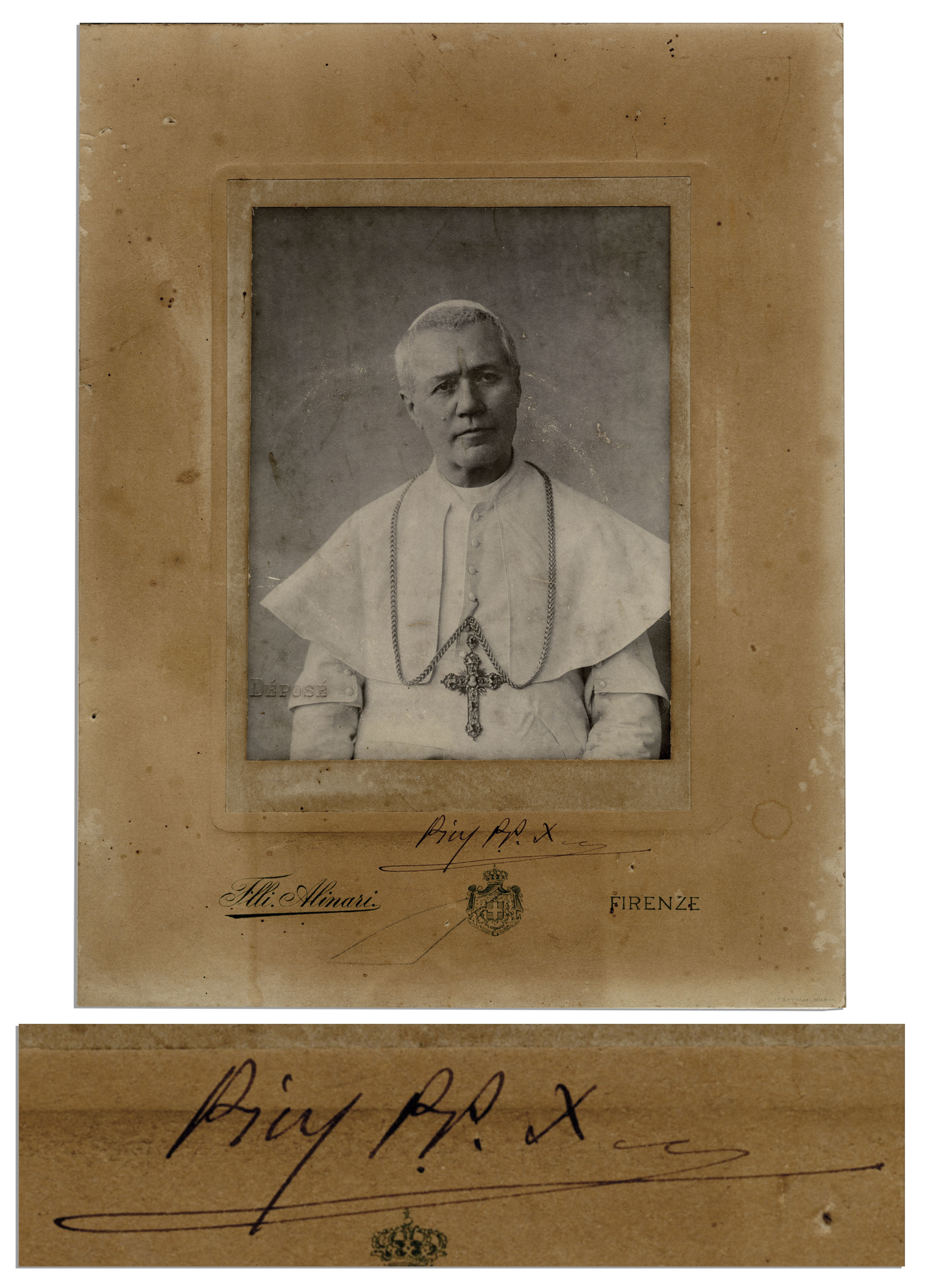 If you would like to auction, buy, consign or sell a Pope autograph, please email Nate@NateDSanders.com or call (310) 440-2982.