Oliver Cromwell Autograph on a Document Sells for $8,098 at NateDSanders.com Auction

Scarce Oliver Cromwell Autograph on a Real Estate Document From 1656 — Signed as Lord Protector, Two Years Before His Death

Oliver Cromwell autograph on a real estate document “Oliver P.” — abbreviated for Lord Protector, his title from 1653 until his death in 1658. Document reads in part, “…Court there held on the first day of April in the year of our Lord one thousand six hundred fifty-six. At this court came Francis Foster and surrendered into the hands of the lord of the said manor one tenement and forest of land yearly rent of to be paid at the feast of St. Michael the Archangel and the annunciation of the Virgin Mary by equal portions…” At the English Civil War’s outset, Cromwell began his military career by grooming a cavalry troop, known as the “Ironsides Cavalry”, which became the core of his New Model Army, as well as the origin of Cromwell’s nickname, “Old Ironsides”. Cromwell’s leadership in the 1644 Battle of Marston Moor brought him to great prominence. As a leader of the Parliamentarian cause, and commander of the New Model Army (informally known as the “Roundheads”), Cromwell defeated King Charles I, thus bringing to an end the monarchy’s claims to absolute power. Following his death and burial, Cromwell was exhumed and post-humously punished for treason. Document measures 12.5″ x 7.25″. Water spots and light soiling, otherwise in near fine condition.  Sold for $8,407. 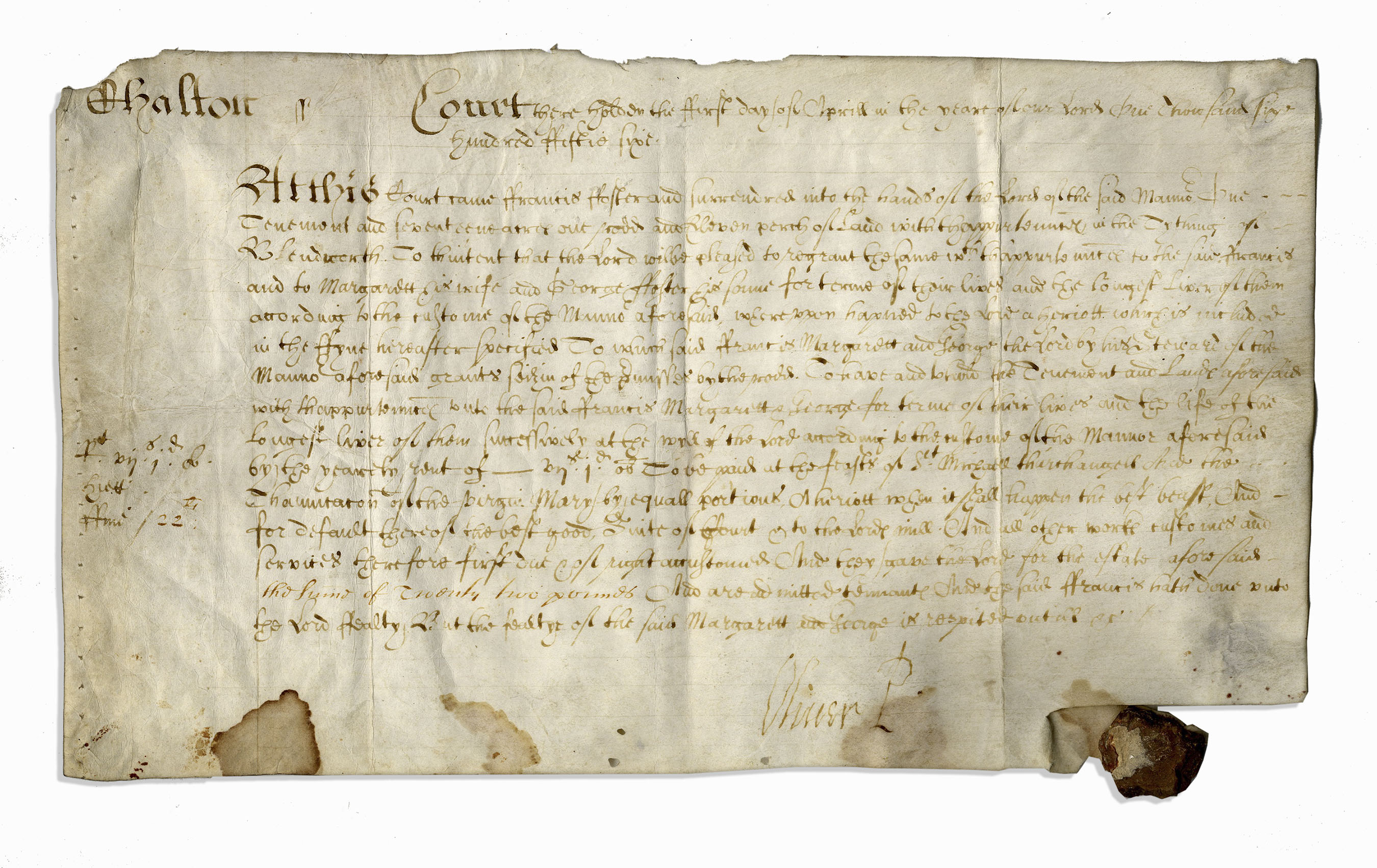 Oliver Cromwell Autograph on a Document from 1655 Signed Boldly ”Oliver P.” as ”Lord Protector” of England

Oliver Cromwell autograph on a document as Lord Protector of England, dated 21 April 1655. Rising to power at the end of England’s Civil War and the dismantling of the monarchy after Charles I’s regicide, Cromwell was known as a polarizing, controversial force during this fraught time in the country’s history; upon the Royalists return to power in 1660 after Cromwell’s death, his body was dug up and put in chains. Document is a warrant of payment by Cromwell and orders a Gualter Frost, treasurer for the council’s contingencies, to pay ”£6 2s 9d” to a Captain John Cressit, ”being soe much by him expended in rideing Post upon Our Service…” Signed boldly ”Oliver P.” in black ink by Cromwell. Measures 8.25″ x 11.25″. With docketing and receipt signed by Cressit on verso for the named sum. 1pp. document comes with a paper border affixed to edges to an overall size of 9.75″ x 15″. Some show-through, foxing, and toning throughout, else near fine condition.  Sold for $8,098. 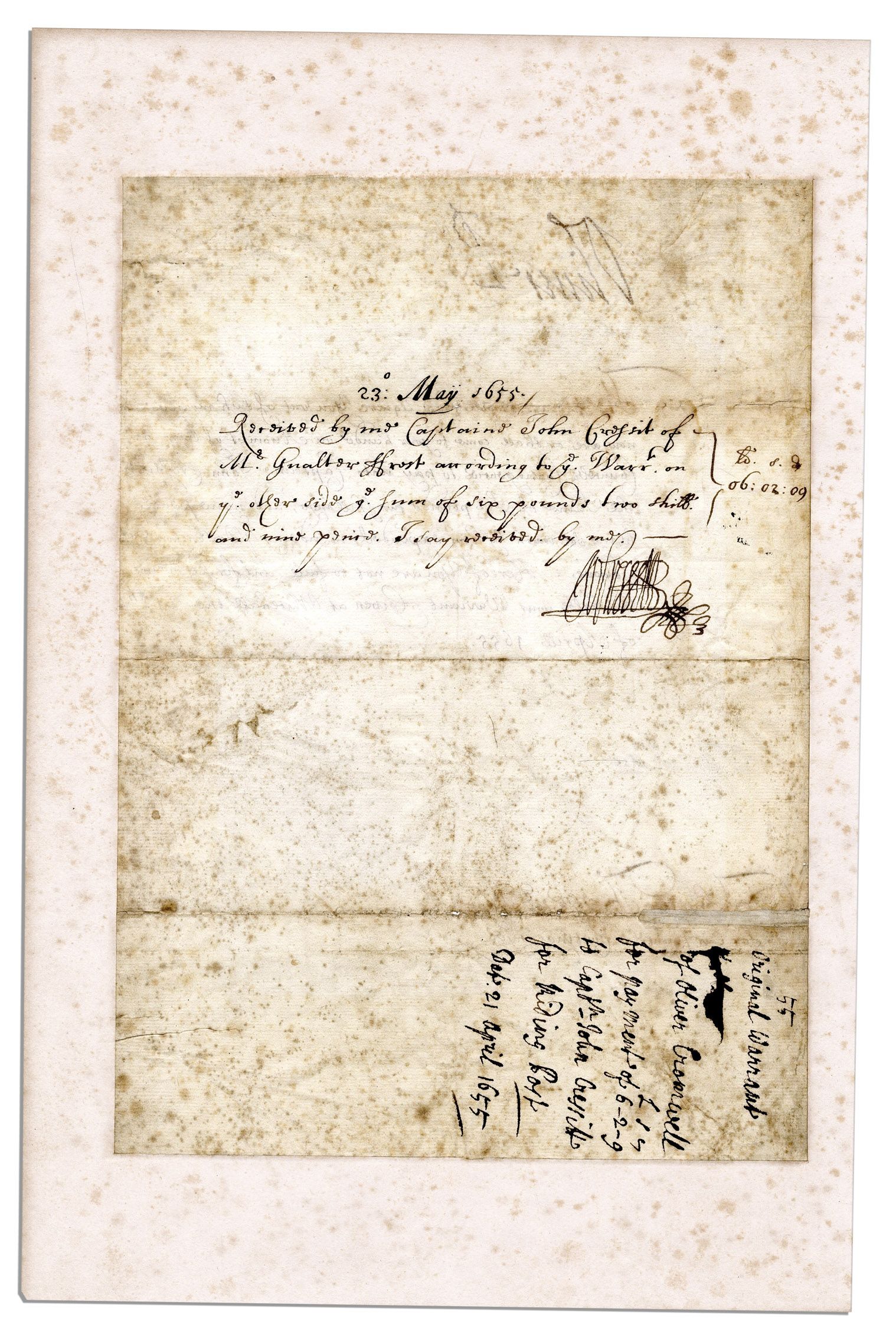 Oliver Cromwell autograph on a warrant, dated 1 April 1657 at Whitehall. Letter is addressed to Joseph Almond, Thomas Chesham, Thomas Cowell and William Naylor and discusses the complicated relations with the East India Company. Signed, “Oliver P” (Protector) in a wavering hand, as he was suffering from malaria that ultimately led to his death a year later. Quite possibly an implementation of the Navigation Act of 1651, which was designed to address the Dutch dominance of naval commerce, warrant documents the seizure of, “…quantities of Gold and other things at ye Downes [the stretch of sea off Dover] in several ships bound for the East Indyes, as being designed to be exported out of this Commonwealth contrary to Law…” Document then details inventory arrangements to be taken by Captain Rolt (presumably Thomas Rolt, later knighted under James II, an official of the East India Company) and Mr. Jessop (likely William Jessop, of the Council of State), as well as the ultimate disposal of the goods “…to see ye same delivered to the Commsrs. of the Customs…” Document on one page measures 8″ x 11.75″ with 15 handwritten lines and is framed with an engraved portrait of Cromwell. Folds and toning throughout, else very good condition.  Sold for $7,295. 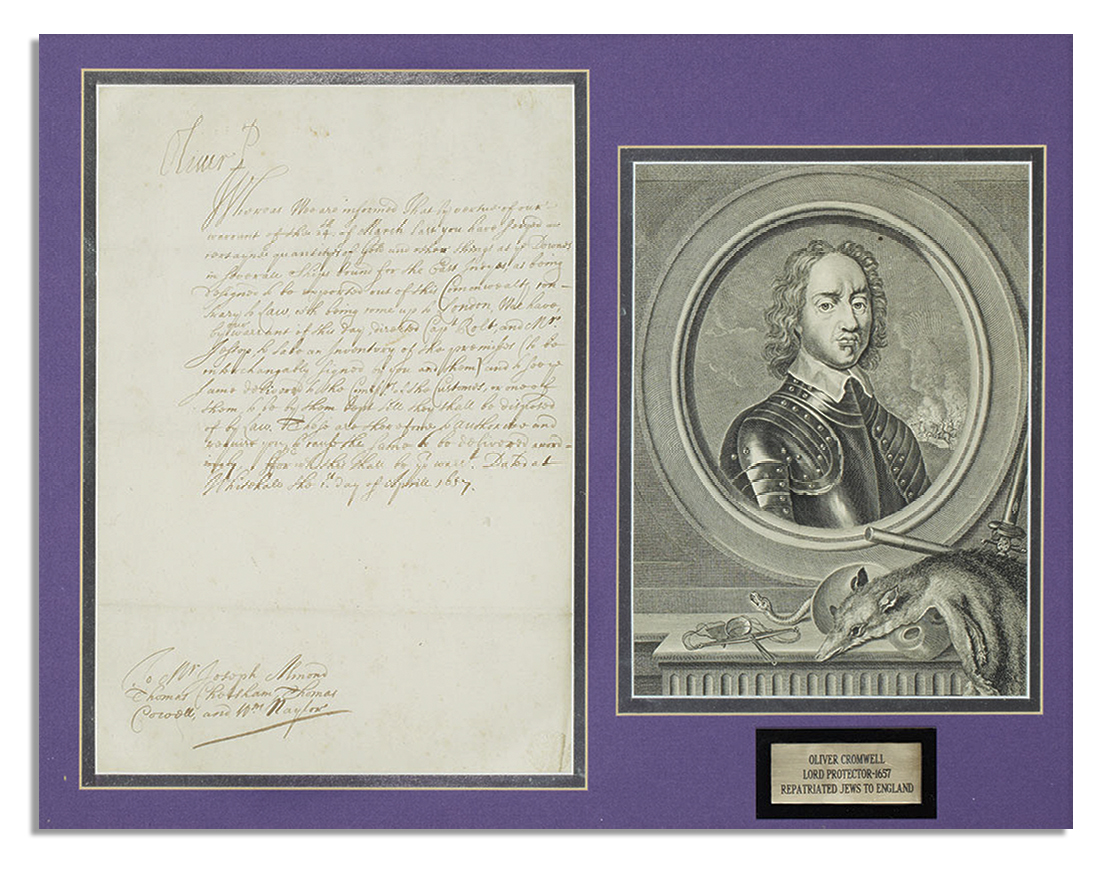