If you are looking to buy, auction or sell Mary Poppins memorabilia or another Mary Poppins jacket or costume, please email Nate@NateDSanders.com or phone (310) 440-2982.

We just sold this piece of Mary Poppins memorabilia:

“Mary Poppins” artwork signed by its stars, Julie Andrews and Dick Van Dyke, #129 in a limited edition of 500. Produced by Walt Disney Art Classics, this cel set-up entitled “Tea Time With Mary” depicts scene 62 of the film, made from the original Disney animation drawings. Released in 1964. “Mary Poppins” earned immediate acclaim, was nominated for 13 Academy Awards and took home five, including “Best Picture”, “Best Actress” for Julie Andrews and “Best Visual Effects”; it was the only Disney film to win “Best Picture” in Walt Disney’s lifetime. Artwork measures 17.25″ x 11″, matted and framed by Disney to a size of 27″ x 20.75″. With original Disney paperwork sealed in pouch on back of frame. Near fine condition.  Great Mary Poppins memorabilia piece. We have another one available at $5,000. 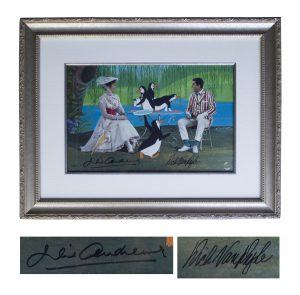 Back in the summer of 2013, we at NateDSanders.com were lucky enough to offer one of the neatest pieces of Mary Poppins memorabilia to come onto the market — Dick Van Dyke’s famous jacket worn in “Mary Poppins”.  Here is the description and pictures of the Mary Poppins Jacket:

Iconic jacket worn by Dick Van Dyke in one of the most memorable scenes of Disney’s 1964 everlasting hit, “Mary Poppins”. Dick Van Dyke starred as “Bert” the chimney sweeper opposite Julie Andrews as “Mary”. Colorful striped coat was worn in the whimsical scene in which Bert, Mary, Jane and Michael hop into one of Bert’s chalk paintings depicting an English countryside and county fair. Van Dyke wears the coat as he sings “Jolly Holiday” to Mary and the two frolic through an animated landscape. The scene was groundbreaking as it was one of the early Hollywood films to combine live action with animation, as Bert and Mary interact with the animated animals from farm to forest, with a penultimate dance sequence in which Bert dances with a pack of penguins. Jacket is designed with vertical stripes running throughout in pink and mango tones. With a lining in red, jacket has two inside flaps that served as makeshift hooks for a moment in the scene when he was lifted to sing along with some birds. Original tag reads, “Western Costume Co. Hollywood / No. 2764-1 / Name: Dick Van Dyke / Chest: 39 1/2 / Sleeve: 17 1/2” in inches, and a second “Western Costume Co.” stamp to lining. Measures 33″ in length. Includes an original Christie’s tag from a prior 1993 auction. Coat has two very minor, unnoticeable spots, else near fine condition.  Great Mary Poppins memorabilia. 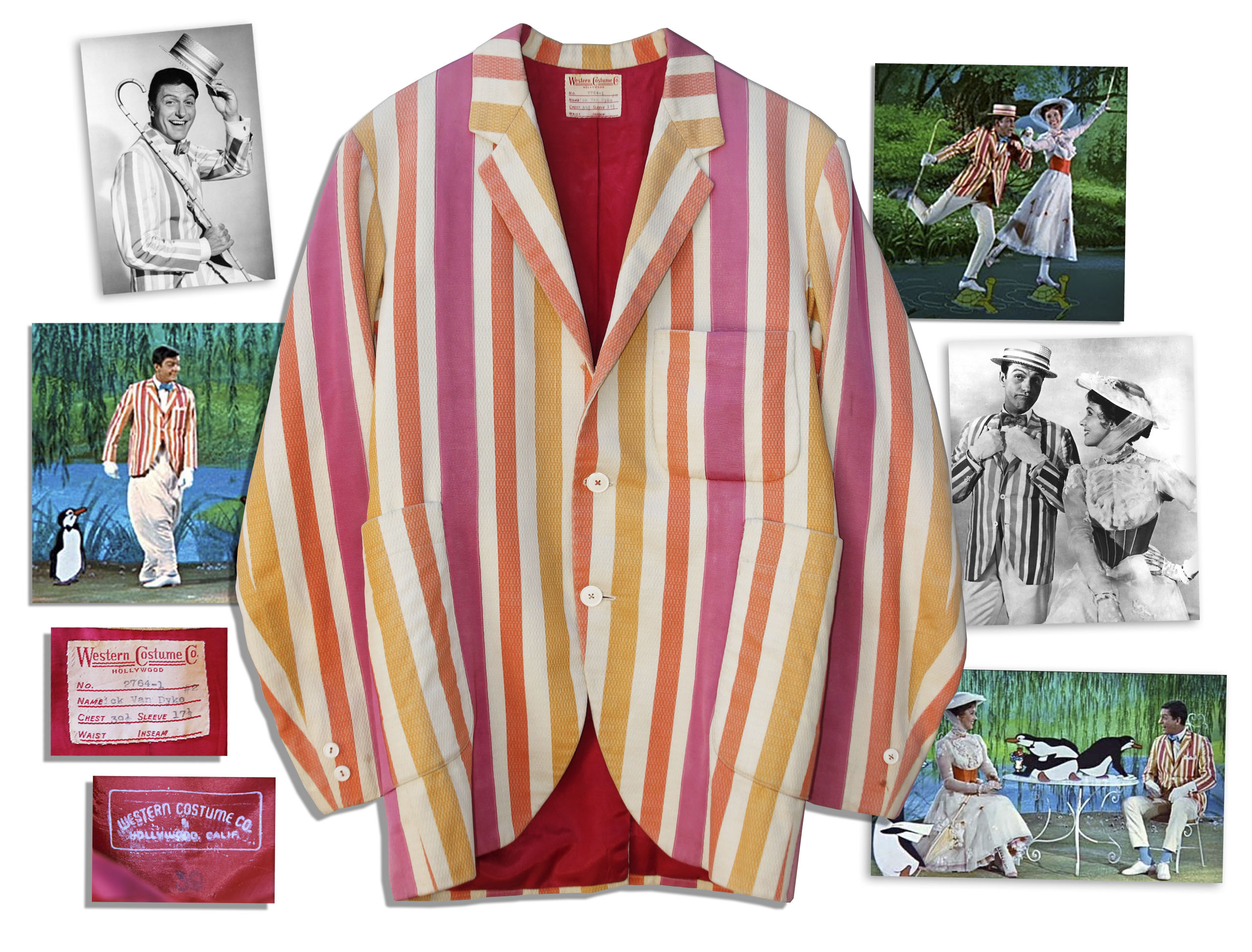 If you are looking to buy, auction or sell Mary Poppins memorabilia or another Mary Poppins jacket, please email Nate@NateDSanders.com or phone (310) 440-2982.