Interesting Marie Curie autograph letter signed, dated 6 November 1910 from Paris on “Faculté des Sciences de Paris” letterhead, regarding construction of the famous Curie Radium Institute. Following the death of her husband Pierre Curie in 1906, Marie took his place as Professor of General Physics in the Faculté des Sciences, the first woman to hold this position. An onslaught of slanderous articles were written about her at this time, particularly as she began an affair with another scientist who was married. Letter, written in French, is addressed to the director of the newspaper “Les Temps” and reads: “An article concerning the Radium Institute which recently appeared in the last issue of the ‘Cri de Paris’ has just been forwarded to me. The information contained in this article is completely false. I have not as yet received either the plans or the estimates for this institute, nor have I made any of the demands mentioned in the article. I am hoping that this article, obviously conceived with malicious intent, will not be accepted by the press in a manner likely to contribute to the propagation of such a myth.” Letter, measuring 5.25″ x 8.5″ on one page, has minor toning, else near fine condition.  Sold for $7,866. 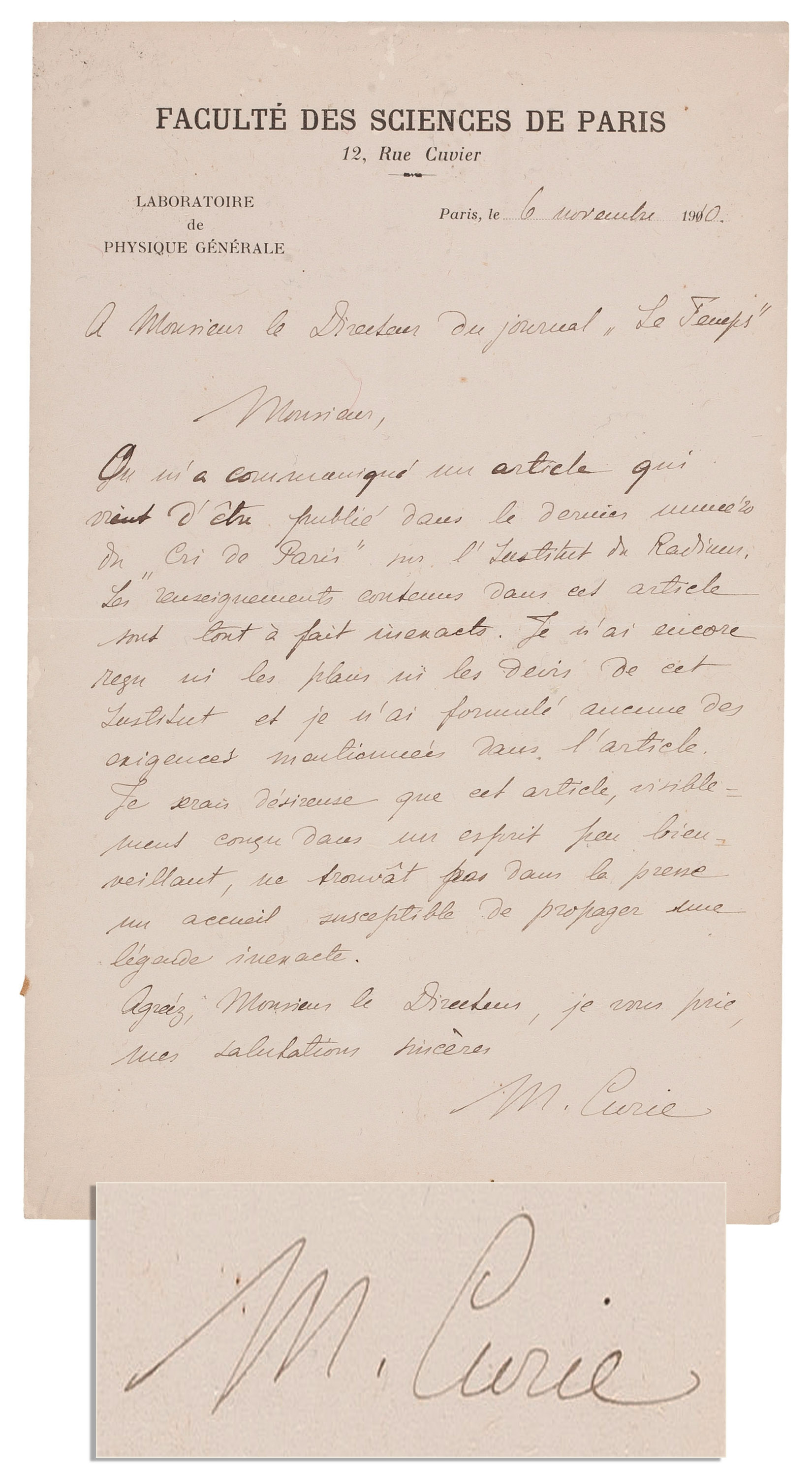 Scarce WWI-dated Red Cross radiology training certificate with the physicist Marie Curie autograph, the first woman to win a Nobel Prize, the only woman to win in two fields, and the only person to win in multiple sciences. Certificate was presented to an American woman, Dr. Esther E. Parker, by Marie Curie on 18 December 1917. Curie became director of the Red Cross Radiology Service and set up France’s first military radiology center in 1914, which successfully treated an estimated one million soldiers with x-ray units. Curie was training 150 women to be radiological assistants at the Edith Cavell Hospital in Paris where she set up a laboratory from 1914-1919 on behalf of the wartime foreign medical service. Of the 150 women, 43 physicians came from the U.S., commissioned by the American Red Cross. Certificate is printed in French, and notes that Dr. Parker has successfully completed her exam and can be an aid as a radiologist. Signed ”M. Curie” at bottom left, next to another signature, possibly ”Dr. Haretz.” Certificate measures 11.75” x 8.25”. Some toning, overall very good condition.  Sold for $3,691. 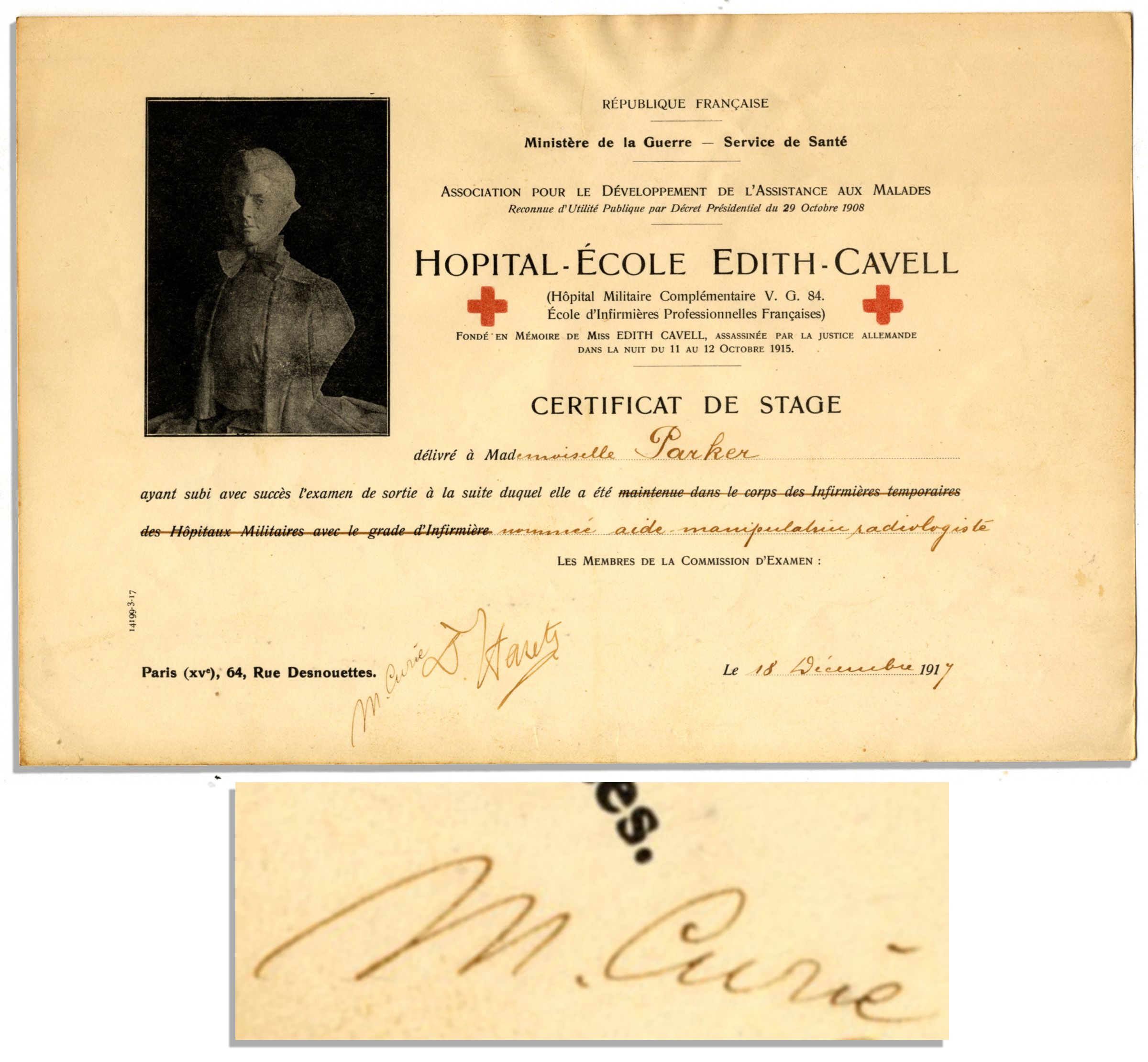 Marie Curie Autograph in Her Book

Rare Marie Curie autograph in her biography of her famous husband, “Pierre Curie,” published in 1924. French first edition. Red half leather cover. Inscribed to an important American friend, Missy Maloney, a prominent American journalist. Signed on the title page, “To dear Missy, her friend, M. Curie.”  Unlike most of the signed American editions of this book, Curie’s autograph is flat-signed on the book, not tipped in. On the first free endpaper, Missy Maloney has written a dedication of the book to her son, giving it to him for Christmas, and his bookplate is in the front.  Sold for $3,032. 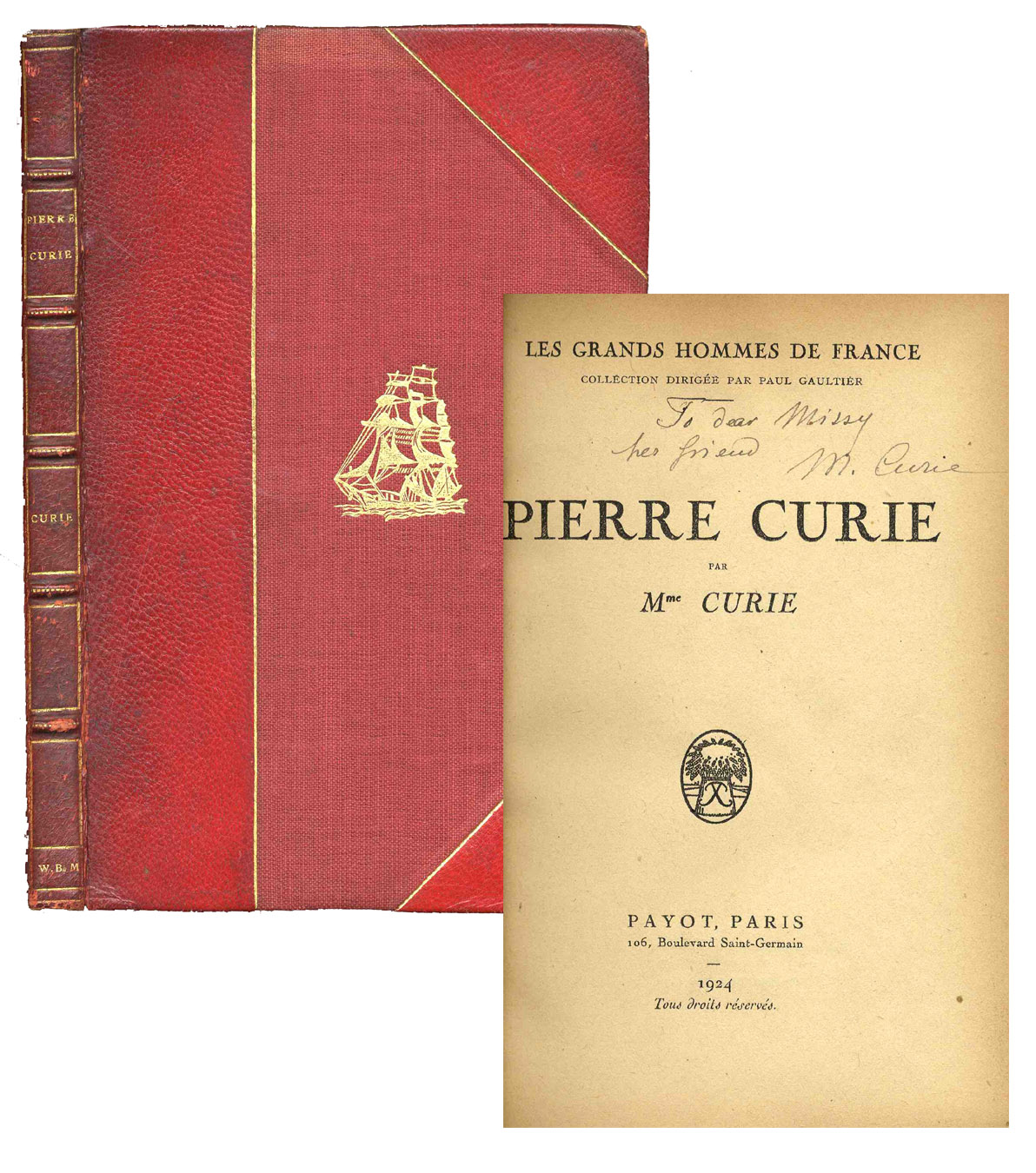 Fine Marie Curie autograph upon her “Institut Du Radium” notecard from the “Faculte Des Science De Paris.” 5.5″ x 4″ card is signed “M. Curie” and bears the printed reference, “Laboratoire Curie.” Near fine. With original mailing envelope, postmarked Paris, 1932, as well as a typed letter signed from Curie’s secretary. Also included are a menu from a 1925 event, two unsigned 8″ x 10″ photos, and a 1921 receipt from the Societe Francaise de Physique. Marie Curie signed items from her Radium Institute are quite rare.  Sold for $2,731. 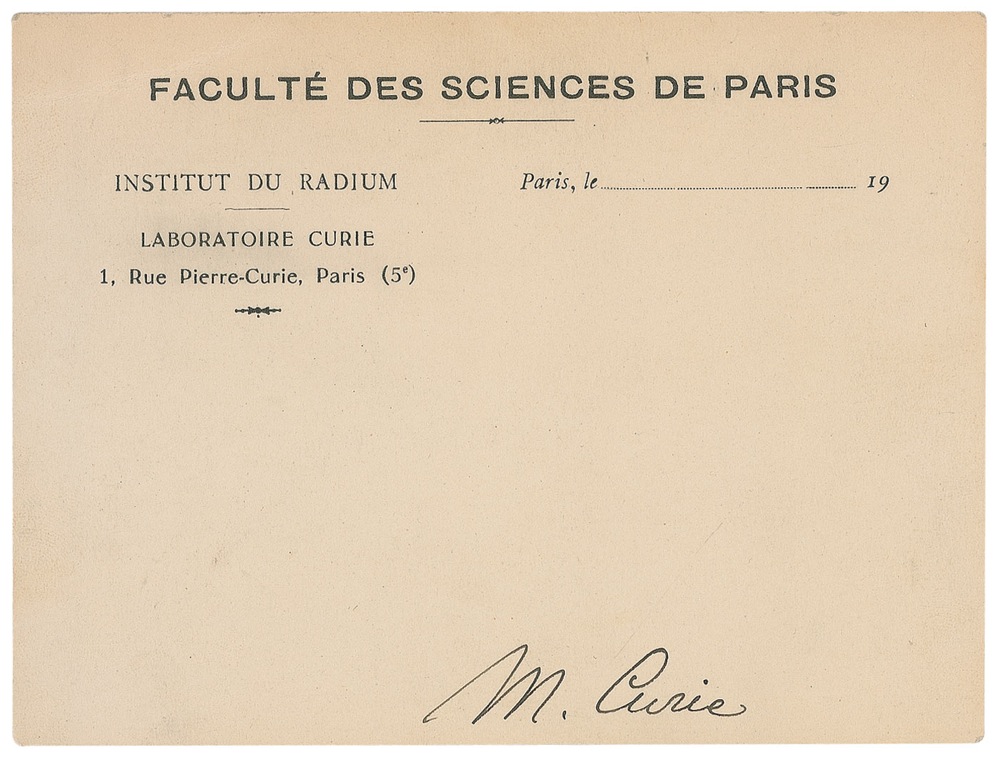