Casablanca Memorabilia at Auction at NateDSanders.com Included a Casablanca Oscar

If you are looking to buy, auction or sell Casablanca memorabilia, please email Nate@NateDSanders.com or phone (310) 440-2982.

Over four years ago, I had just completed the sale of the Orson Welles Citizen Kane Oscar for over $865,000 at my auction — December 2011 — and then followed that up with $3 million worth of Oscar sales in just one auction — February 2012.  While researching more Oscars to sell, one newspaper article caught my eye where a buyer a few decades ago had bought the best piece of Casablanca memorabilia imaginable — a Casablanca Oscar for best director.  It turned out that the buyer was an A-list celebrity and after contacting him, my manager flew to New York to pick up the Oscar from his bedroom.  The Casablanca memorabilia auction was a “reserve not yet met” auction and the celebrity had placed a $2 million dollar reserve on the trophy.  Bidding was fierce led by one of Hollywood’s greatest directors placing a bid for $1.25 million dollars, but that is where the bidding stopped.  The best piece of Casablanca memorabilia went unsold but we did go on to sell over $6 million dollars worth of Oscars that were not the Casablanca Oscar.  The Oscar was returned by an employee, and to the delight of my employee who traveled to return it, they were treated to VIP treatment from the celebrity.  Years later I relayed to the celebrity that I had a $3 million dollar offer for the Casablanca Oscar and the celeb declined the millions and said that he enjoyed it too much and will keep it forever.  I have no idea why he consigned the best piece of Casablanca memorabilia in the first place.  He obviously didn’t need the money.  He must’ve had auction fever!

Oscar statue awarded to Michael Curtiz for Best Direction of the 1943 film “Casablanca,” one of the most respected films made during the Golden Age of Hollywood. Like other films considered the greatest of all time, “Casablanca” has consistently grown in acclaim over the years, although it was recognized in its day with three Academy Awards in March 1944 including Best Picture and this Oscar for Best Director. It’s now considered by the American Film Institute to be the second best film of all time, just behind “Citizen Kane.” Produced by Warner Brothers, the film is set in Casablanca, Morocco in 1941. Humphrey Bogart stars as the owner of Rick’s nightclub, with Ingrid Bergman as his ex-lover and Paul Henreid as her Czech Resistance leader husband. Its blend of wartime political intrigue, romance and humor culminates in one of the most moving and quoted final scenes in cinematic history: “Here’s looking at you, kid.” As Rick Blaine, Bogart’s decision to honor duty above all else supports the belief of “Casablanca” as an allegory of the United States’ entry into WWII. Many of Curtiz’s films received Oscar nominations in various categories throughout his career, but “Casablanca” is his singular win. The plaque affixed to the front of the base is engraved: “Academy First Award / To / Michael Curtiz / For The Direction of / ‘Casablanca'”. The plaque upon the opposite side reads: “Academy Of / Motion Picture / Arts And Sciences / First Award / 1943”. Gold-plated statue of “Oscar” standing on a film reel measures 10.25″ in height atop a round black Belgian marble base to an overall height of 11.75″. Base measures 5.5″ in diameter. Statue weighs 6 lbs. 13 oz. Light speckling to finish, else near fine.  The ultimate item of Casablanca memorabilia. 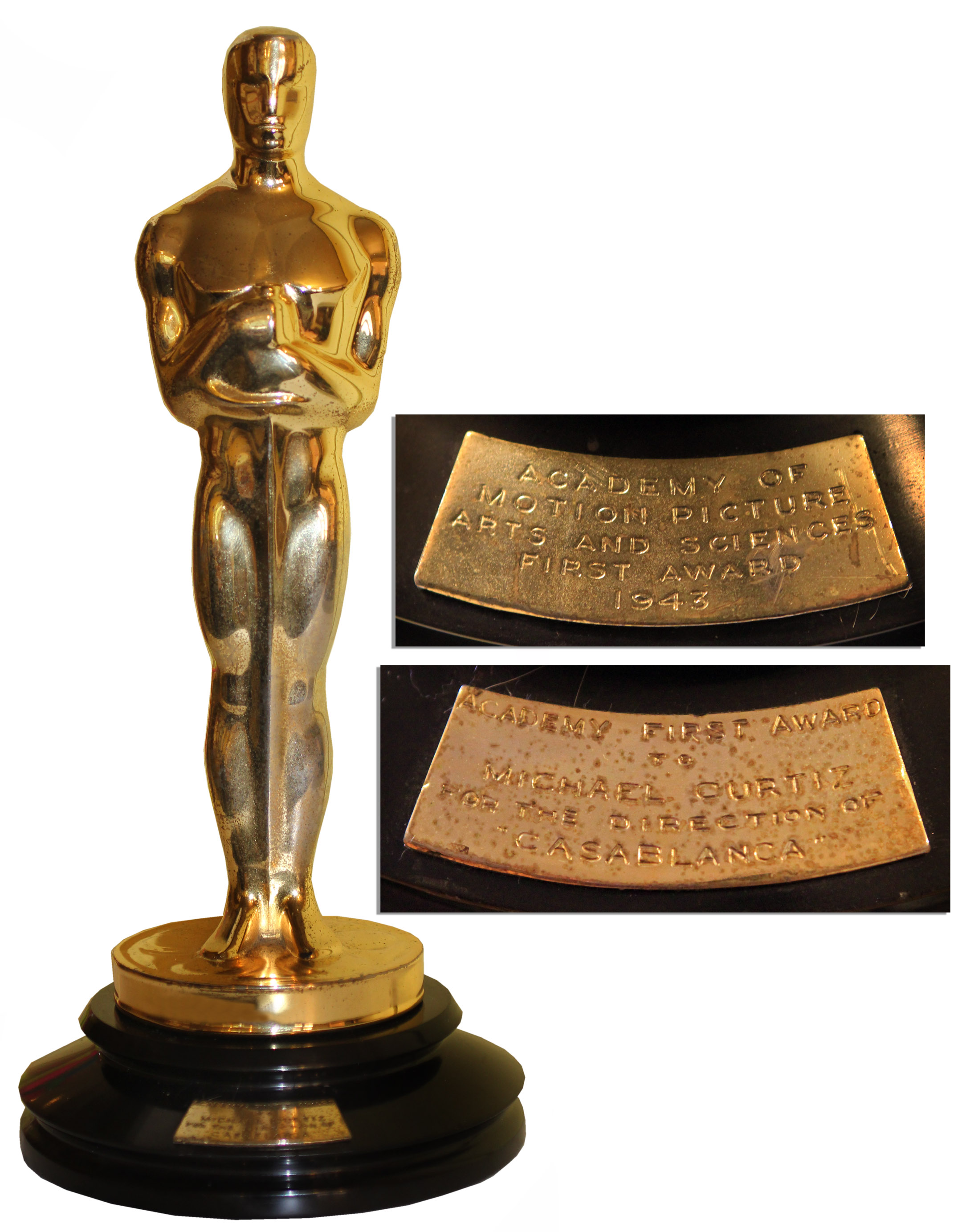 If you are looking to buy, auction or sell Casablanca memorabilia, please email Nate@NateDSanders.com or phone (310) 440-2982.