Items flown on the Apollo 14 mission, including flags and Robbins medals, are in demand and are somewhat rare and pricey.  Here is a list of the items flown on Apollo 14 that we have sold at NateDSanders.com Auctions:

Apollo 14 American flag flown to the moon and carried upon its lunar surface by astronaut Edgar Mitchell (and scarce as such). Flag is also signed by Mitchell, the lunar module pilot of Apollo 14 who spent nine hours working on the lunar surface in the Fra Mauro Highlands region and becoming the sixth person to walk on the Moon. Accompanied by signed COA, dated 22 May 2006 which reads, “This is to certify that the accompanying — Apollo 14 Lunar Surface American Flag — was proudly carried by me aboard our Lunar Module ‘Antares’ to the Moon’s surface. This flag then remained stowed within the ‘Antares’, and it’s [sic] one-sixth lunar-gravity environment, as Alan Shepard and I completed our exploration of the Moon’s surface. To uniquely identify this flag for future generations, I have personally inscribed it as having been flown to the lunar surface aboard the ‘Antares’, and then signed it. During the Apollo program, it was NASA’s policy to allow astronauts to keep both personal effects, and disposable equipment from their missions, as personal mementos to do with as they wished. This Lunar Surface Flag has been a valued part of my personal space collection since 1971, when it was presented back to me by NASA upon its release from lunar quarantine.” Signed boldly “Edgar Mitchell”. Nylon flag measures 6.25″ x 4″ with “Flown to the Lunar Surface aboard Antares — Feb 5, 1971 / Edgar Mitchell Apollo 14 LMP” written in blue pen on the white stripes of the flag. Both flag and COA are in fine condition. Owned by Mitchell since the completion of Apollo 14. Sold for $17,500.

Swatch of Alan Shepard’s space suit from the Apollo 14 mission. This is a portion of the outermost layer of Shepard’s spacesuit worn while he conducted Extra Vehicular Activity on the Moon. This garment was a component of Shepard’s PLSS — Portable Life Support System. With an LOA from a member of the NASA personnel who worked on preparations for the Apollo 14 mission, to whom Shepard gave this. Measures approximately 1.5” square. With light soiling from moon dust.  Sold for $6,691. 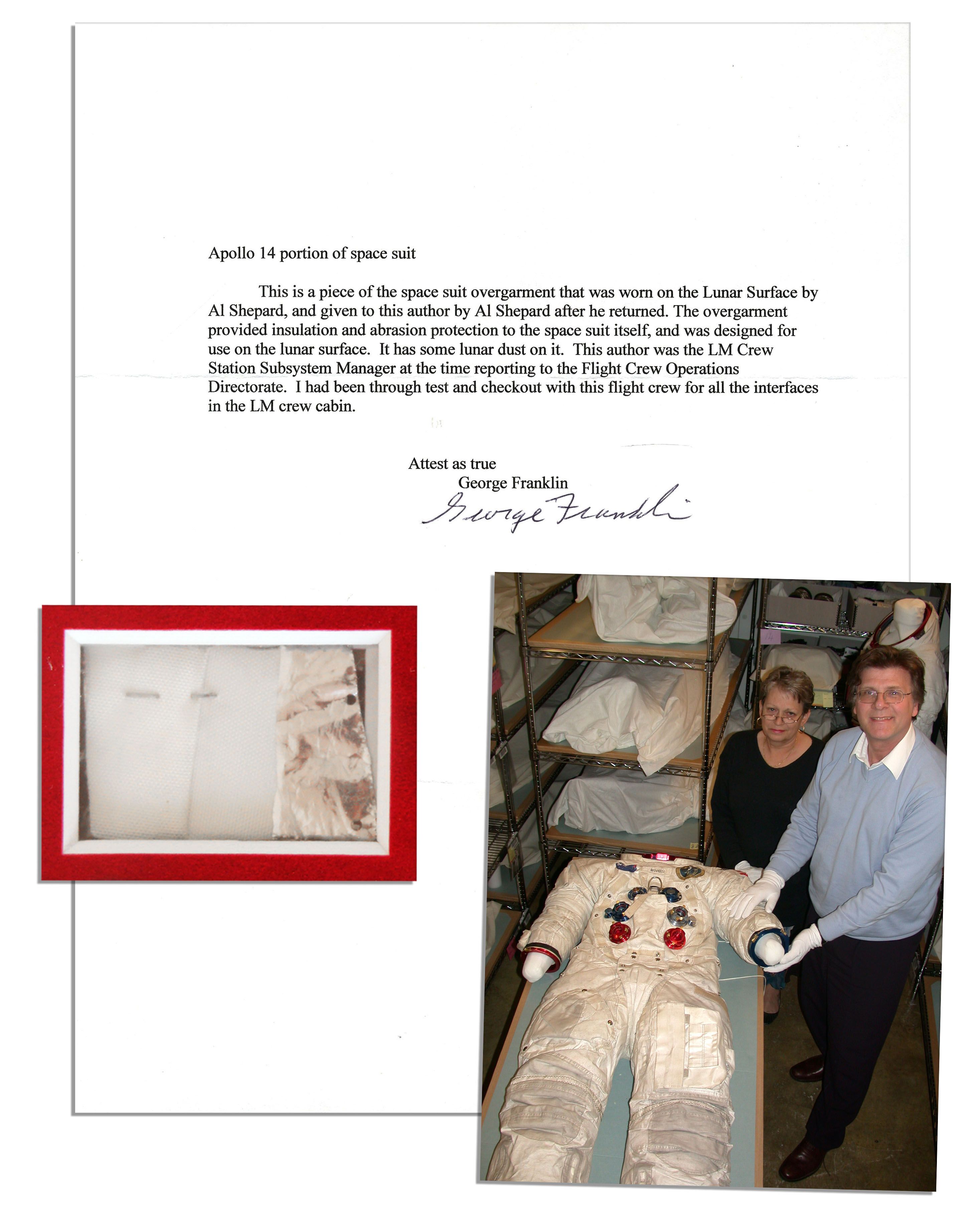 Apollo 14 Robbins medal, serial number 183, as one of 303 flown. Collectively, crewmembers Alan Shepard, Stuart Roosa, and Edgar Mitchell helped complete a successful 9-day lunar mission commencing 31 January 1971, as the eighth manned mission in the Apollo program and the third mission to land on the Moon. Oval medal features an emblem of the NASA astronaut pin, a star, given to U.S. astronauts upon completing their first space flight, and here, shooting through space toward the moon. Each astronaut’s last name is depicted along bottom edge. Verso lists launch, landing and re-entry dates along with the Robbins sterling silver hallmark. Serial number ”183” is engraved along edge. Coin measures 1.25” and is made of sterling silver, housed in its original ”Robbins Company” plastic box with an ”183” sticker on the bottom. Fine. With an LOA from Apollo 13 astronaut Jack Swigert’s sister.  Sold for $5,000.

American flag flown to the moon aboard Apollo 14. Flown flag is mounted to a COA signed ”Alan Shepard”, ”Stuart Roosa” and ”Ed Mitchell”. COA reads in print, ”This flag was carried to the moon on the Apollo 14 mission to Fra Mauro / Apollo 14 / January 31-February 9, 1971”. Printed on the bottom third of the certificate is the Apollo 14 mission insignia. Cloth flag measures 6” x 4”, mounted to an overall size of 10” x 12”. Show through of to adhesive at flag corners, else near fine.  Sold for $3,049. 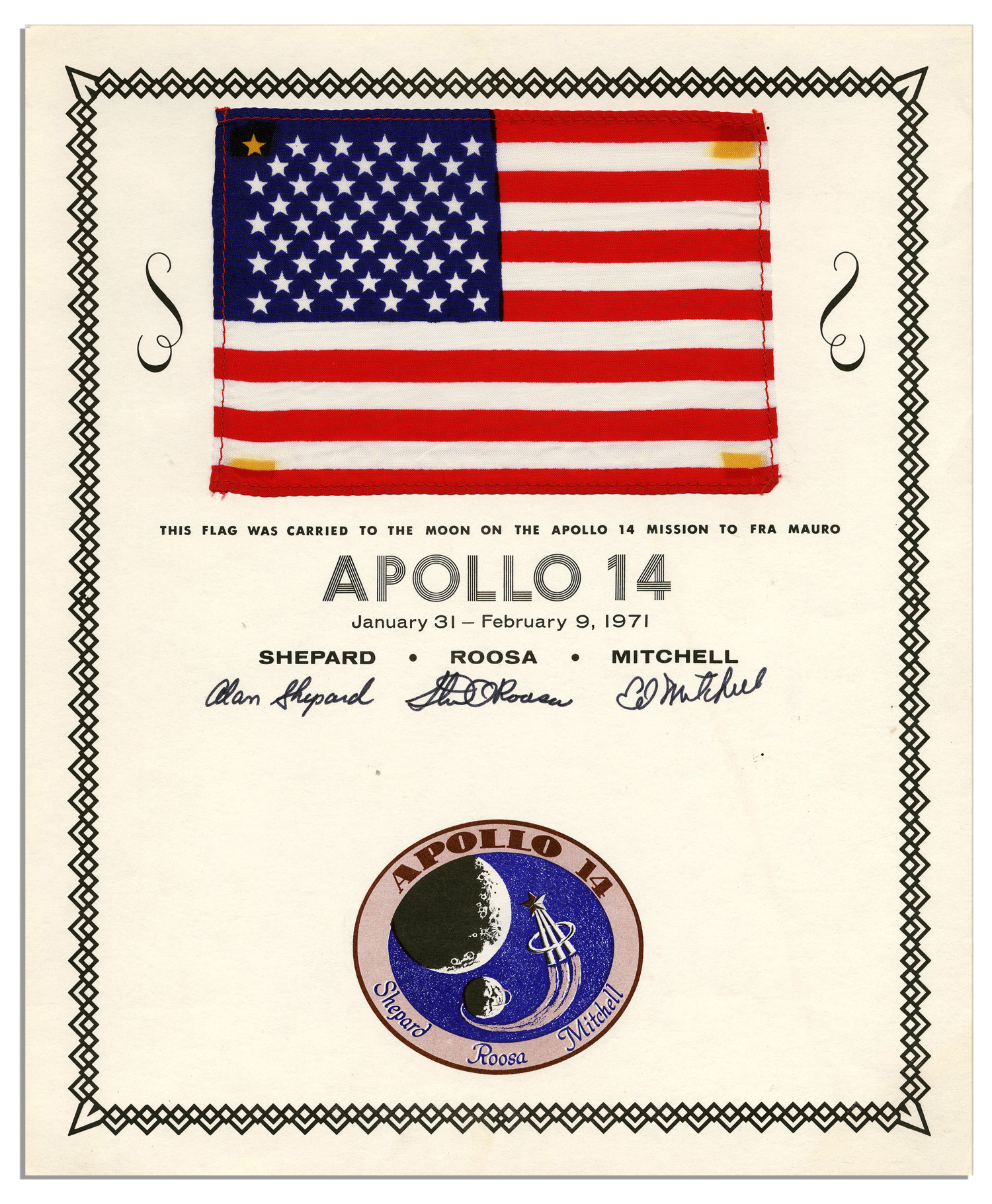 Rare Austrian Flag Flown to the Moon Aboard Apollo 14 — With COA Signed by Astronaut Edgar Mitchell, Who Also Signs Flag

Apollo 14 flown Austrian flag, carried aboard the spacecraft Kittyhawk by its Lunar Module Pilot Edgar Mitchell. Red and white 6″ x 4″ flag is signed “Edgar Mitchell LMP” who additionally writes “Flown to the moon aboard Kittyhawk Apollo 14”. Mitchell also writes in the accompanying COA, “The accompanying flag was flown aboard the spacecraft Kittyhawk on the Apollo 14 expedition to the moon which launched January 31, 1971…I hope that this historic piece will bring pleasure to viewers for many years…[signed] Edgar Mitchell”. Fine. Sold for $3,000.