A White House Pen Can Sell for Thousands of Dollars at Auction Says Nate D. Sanders

FREE APPRAISAL. If you are looking to auction, buy, consign or sell a Presidential pen or a White House pen, please email Nate@natedsanders.com or call Nate D. Sanders Auctions(http://www.NateDSanders.com) at (310) 440-2982.

This President Abraham Lincoln pen has a massive amount of provenance including court affidavits.  Sold for $41,250.

Extraordinary collectible from the Presidency of Abraham Lincoln, a personally owned and used pen by Lincoln, given to him during his service as President. Steel-nib fountain pen, lightly worn from use, is evocative and notable for the gold-colored star pattern upon its barrel, calling forth the patriotic Union sentiment at the heart of the Civil War, clearly intended to inspire the President and reminding him of the War’s noble and patriotic purpose.

President Abraham Lincoln pen has been identified as part of a set inherited by Mary Edwards Brown, Mary Todd Lincoln’s grandniece who famously served as Custodian of the Lincoln Homestead in Springfield, Illinois. The pen is listed as one of the items in a 2 May 1925 notarized affidavit signed by Brown as number “15. Penholder set, property of Abraham Lincoln”, a copy of which accompanies the pen. This affidavit was created by Brown to accompany the sale of the pen to Richard Hagen of Friends of the Lincoln Shrines, whose 1958 notarized affidavit copy also accompanies the pen, created when it was sold to noted Lincoln dealer King Hostick; affidavit reads in part: “the antique pen holder set…is the one and same pen holder set described in a notarized affadavit dated 2nd May,

1925, and signed by Mary Edwards Brown. I further certify that this pen holder, containing 2 pens, a letter opener, and a scraper, was purchased by me as agent of Friends of the Lincoln Shrines, from Mary Edwards Brown”. Finally the pen is accompanied by the original handwritten note by Mary Edwards Brown reading, “Desk set of pen holders pencil scraper etc. given to Abraham Lincoln while President of U.S.” This note has been authenticated by University Archives as written by Brown and matching the writing on her 1925 affidavit; the 1925 affidavit was provided by Daniel Stowell, former director of the Papers of Abraham Lincoln Project. University Archives COA also accompanies the lot validating the authenticity of the pen as originally owned by Abraham Lincoln and as one of the pens in the set described in the three documents.

President Abraham Lincoln pen (not including ink cartridge) measures 7.25″ long. Light scratching to the nib from use, and some light rubbing to the barrel. Overall in near fine condition, an evocative piece from Abraham Lincoln, likely used for importance during the Civil War. 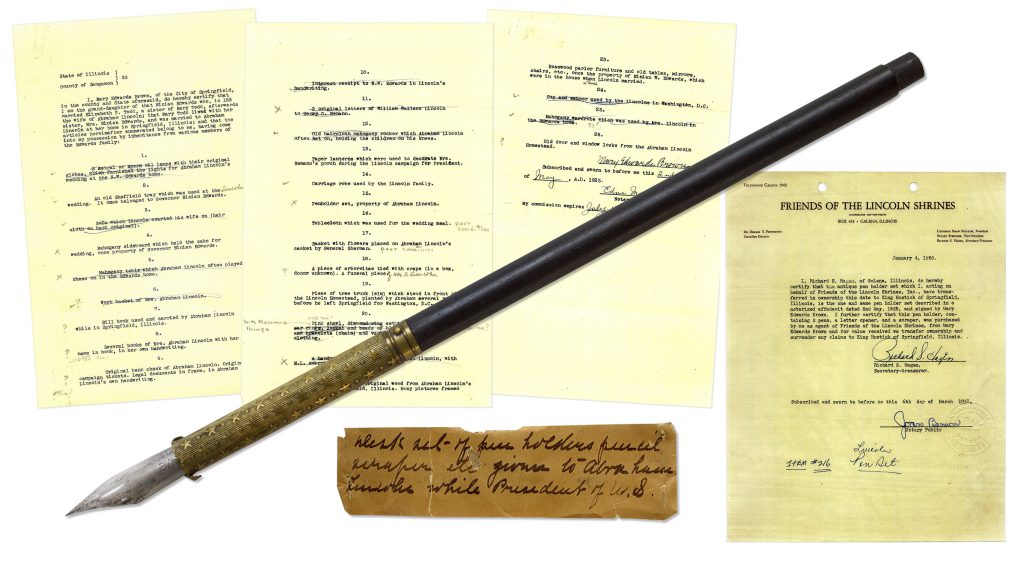 Fountain dip White House pen used by Franklin D. Roosevelt to sign the landmark Robinson-Patman Act into law on 19 June 1936. Sponsored by Congressmen Wright Patman and Joseph Taylor Robinson, the Robinson-Patman Act protected small businesses from larger retail chains by prohibiting the use of price discrimination. Black 78-E Faber brand dip pen with cork grip is housed in a wooden cork-bottomed pen holder with ”Robinson-Patman bill” written to its base. White House pen measures 8” long, wooden base measures 5.5” in diameter. Included with the pen are two books on the history of the act, written and signed by Patman, including: (1) ”The Robinson-Patman Act – What You Can And Cannot Do Under This Law”, published by Ronald Press: New York: 1938. Patman signs ”To my good friend John Dargavel / Wright Patman” to front free endpaper on 9 February 1938. Measures 6” x 8.5” clothed in blue boards; (2) ”Complete Guide to the Robinson-Patman Act”, published by Prentice-Hall: Englewood Cliffs, NJ: 1963. Patman signs, ”For Willard Simmons, an outstanding friend of small and independent businesses from his friend, Wright Patman” to front free endpaper on 4 April 1963. Measures 7.25” x 10” clothed in light brown boards. Both books have stamps to edges and front free endpapers from The National Association of Retail Druggists. White House pen and baseboard are in very good condition.  A very rare White House pen.  Sold for $3,781. 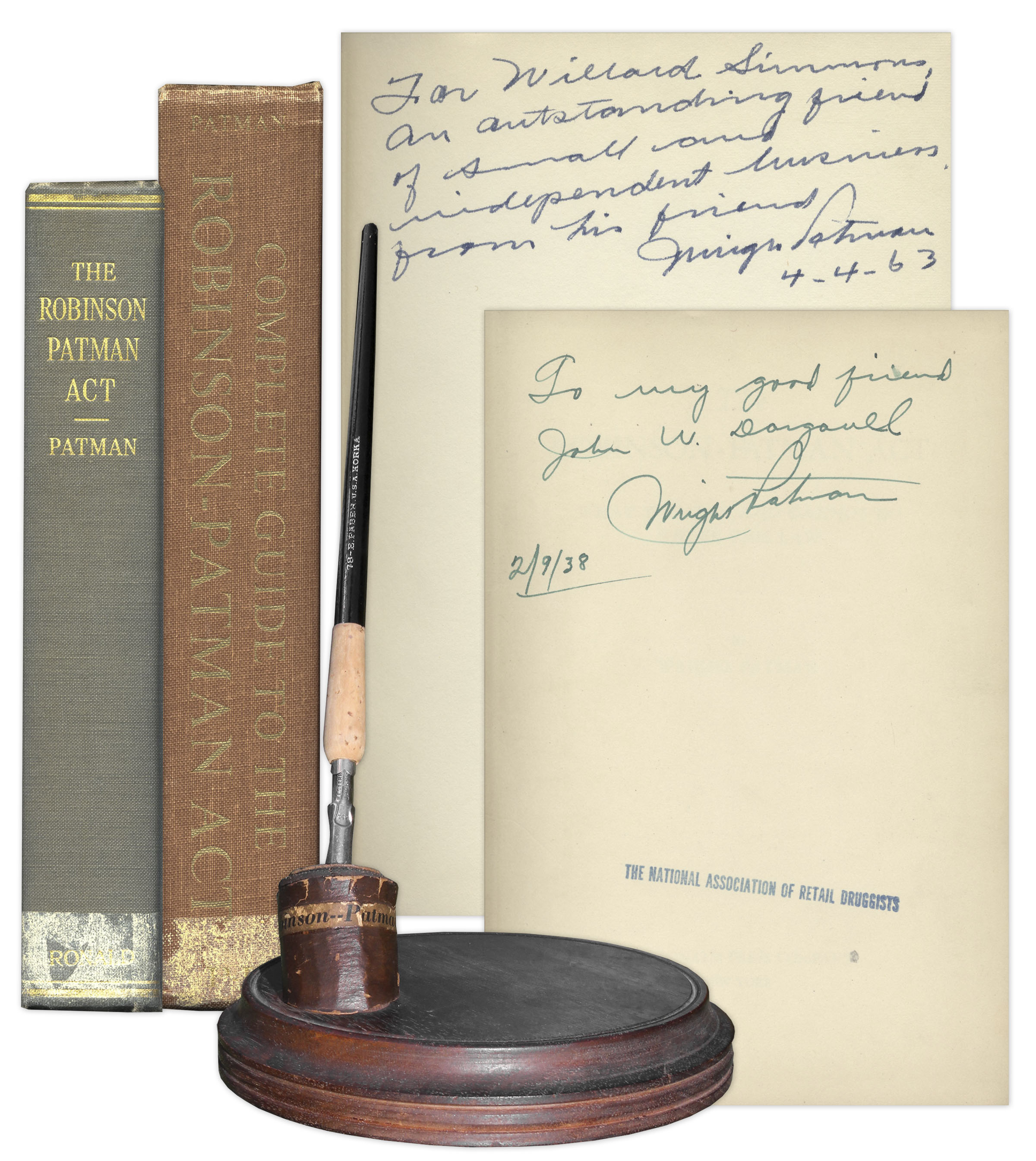 President Ronald Reagan personally owned Executive Order White House pen, used to sign the President’s Commission on Organized Crime established in 1984. This important order was implemented to establish a region-by-region analysis of organized crime across the U.S. With a letter of provenance dated 6 February 1984 and signed in autopen, letter is addressed to Judge Irving Kaufman who was Chairman of the President’s Commission on Organized Crime: ”I am pleased to provide you with the enclosed pen, which I used at the Rose Garden signing ceremony last July for our Commission on Organized Crime. Your commission is vitally important to our promise to do all in our power to break apart and cripple the organized criminal syndicates that our country has tolerated for too long. I know that you have been a leader in the fight against organized crime for decades, and you have my deepest appreciation for your leadership and hard work.” White House pen, letter, original envelope and plaque displaying Reagan’s full name are all nicely matted and framed to an overall size of 18.25” x 12.25”. Some minor scuffing to frame, else near fine.  An excellent Ronald Reagan White House pen in near-perfect condition.  Sold for $1,943. 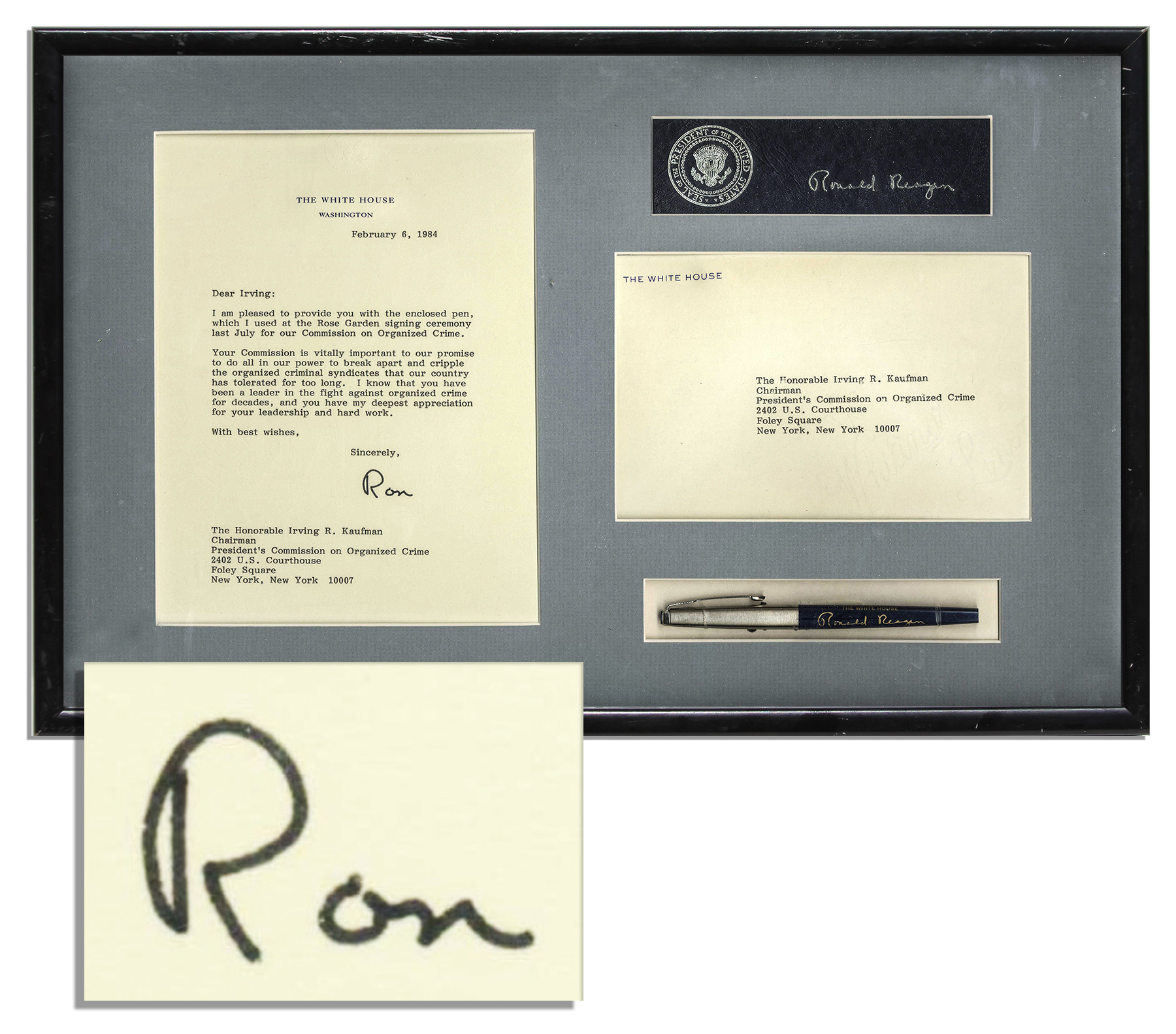 White House pen used by President Lyndon B. Johnson on 23 July 1966, signing bill H.R. 9599 into law. The bill authorized the Secretary of the Interior to make the George Rogers Clark memorial of Vincennes, IN into a National Park. Blue and silver White House pen features the presidential seal along with a facsimile of Johnson’s signature stamped in gold lettering to the middle, and arrives inside a gold Presidential box. Base of the box is removable, revealing a pouch which contains two refill ink cartridges and two new ink tips, allowing the nearly 50-year-old pen to be used as new. Box measures 6” x 2” x 1”. White House pen measures 5.25”. Some toning to box top. Near fine.  Sold for $938.

Bill Clinton typed letter signed as President, with the signing White House pen from legislation regarding the biotech industry which he references in the letter. On White House stationery to Carlos Moorhead, the California Congressman who supported the statute, letter reads in part: ”…Thank you for your leadership in securing passage of the Biotechnological Process Patents Amendments of 1995. This statute will ease the difficulty in obtaining timely and adequate process patent protection for American biotechnology firms. The protection will foster the innovation and keep important, high technology jobs in America. You can take pride in your role in ensuring the enactment of this important measure. Please accept the enclosed signing pen as a token of my appreciation. Sincerely, [signed] Bill Clinton”. The White House pen comes in a brushed metal-trimmed case with a black lid, featuring gilt lettering and a presidential seal. Parker Insignia brand ink White House pen measures 5.25” in length and also bears a presidential seal and printed Clinton signature. Fine. 1pp. letter measures 6.75” x 9”. Fine. With PSA/DNA COA.  Sold for $916. 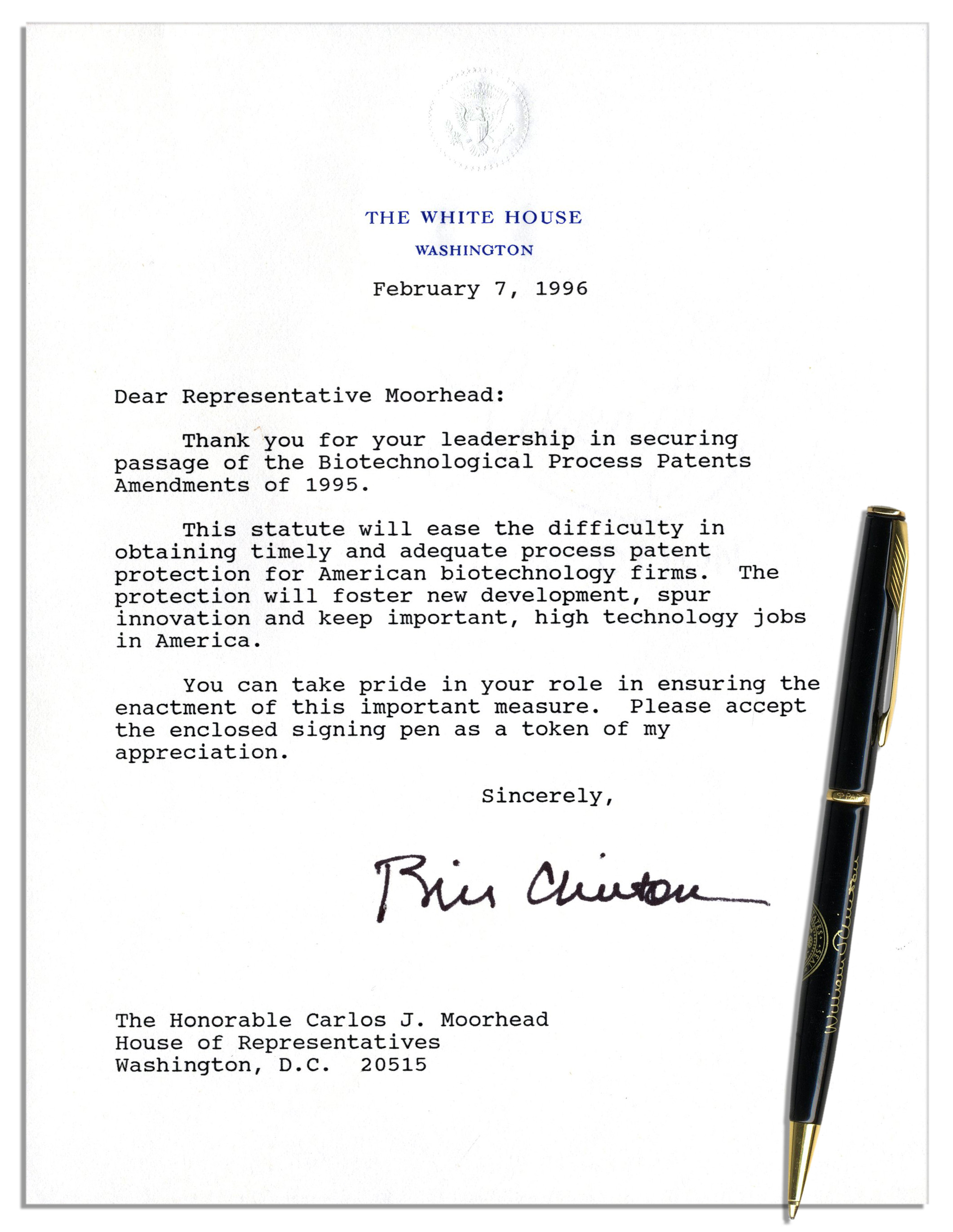 FREE APPRAISAL. If you are looking to auction, buy, consign or sell a Presidential pen or a White House pen, please email Nate@natedsanders.com or call Nate D. Sanders Auctions (http://www.NateDSanders.com) at (310) 440-2982.

Summary of the White House Pen lots that we have had: