Confederate General Joseph E. Johnston autograph letter signed ”J.E. Johnston”, dated 16 May 1865 from Charlotte, North Carolina, written soon after being released on parole by the Union Army. Also with three endorsements signed by Ulysses S. Grant, Secretary of War Edwin Stanton and General John Schofield. Letter is addressed to General Schofield, just two weeks after Johnston surrendered his Army of Tennessee and still active rebel troops. After both parties agreed to military surrender, Johnston and Schofield negotiated supplementary terms, including his soldiers’ release, and here asks permission to travel to Canada. Reads in part: ”…As soon as the terms of ‘the convention’ are executed in Georgia & Florida, I wish to go to St. Catherine’s Springs, Canada. Will you be so kind as to inform me if I will be permitted to travel directly from Virginia to that point? Most respectfully / Your obt sevt / J.E. Johnston”. General Schofield endorses the letter on 16 May, the same day, ”Respectfully refered [sic] to Lt. Gen. Grant. J M Schofield Maj Genl.” Grant then endorses the letter on 22 May: ”I am very much in favor of granting Gen. Johnston’s request and if authorized will telegraph the authority at once. U. S. Grant Lt. Gen.” Lastly, Secretary of War Edwin M. Stanton seeks approval from President Johnson: ”Submitted to the President who directs that the permission asked by General Johnson [sic] be granted with the condition that he does not return to the United States without leave of the President. Edwin M Stanton Sec of War.” Letter on one page measures 8” x 6.25”, matted with a portrait of Johnston to an overall size of 12.5” x 18.25”. Light toning and folds throughout; very good to near fine.  A U.S. Grant autograph is rare dated during the Civil War or directly relates to the Civil War as this one does.  Sold for $12,500. 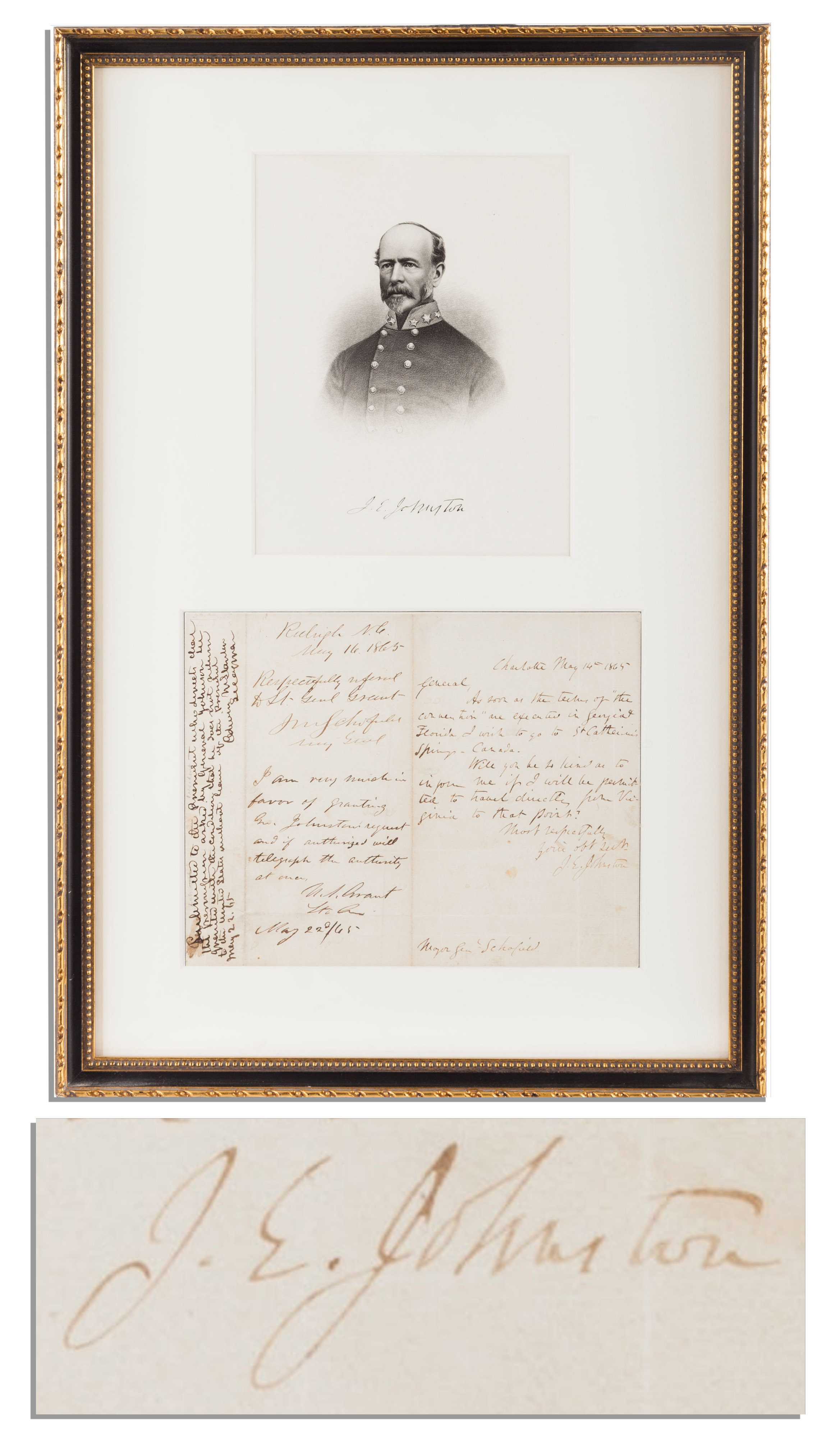 Ulysses S. Grant Autograph Letter Twice-Signed From 1863 — Grant Orders Barges to Be Sent Through Canal at the Height of the Civil War

U.S. Grant autograph letter twice-signed, dated 21 April 1863, while Grant served as Major General for Union forces. The 18th U.S. President writes to Colonel C.A. Reynaud in Millikins Bend, Louisiana in full: ”In view of the expected fall in the river, and possibly the difficulties that may be encountered in reaching Walnut Bayou through the Canal, I think it advisable to put through at once all the barges now ready to receive freight &c. to Cooper’s Plantation. Should the water there fall the distance would not be great to haul supplies to reach the bayou which will be navigable with a great fall of water. Should the river still keep up the barges can be brought back to the mouth of the canal to receive their loading. / Respectfully / US Grant / Maj. Gen.” In a postscript Grant adds, ”This should not be delayed longer than to-morrow / U.S.G.” Five days prior, Grant had ordered Union troops under fire in Vicksburg to meet up with his troops at the West side of the Mississippi. This move confused the Confederate Army and led to a victory at the Battle of Champion Hill on 16 May 1863. 2pp. letter is written in ink on one page, front and back. Measures 8” x 10”. Folds, dampstaining to top right corner and archivally repaired tear at left edge. Overall very good condition with bold and legible writing.  A U.S. Grant autograph is rare dated during the Civil War.  Sold for $3,781. 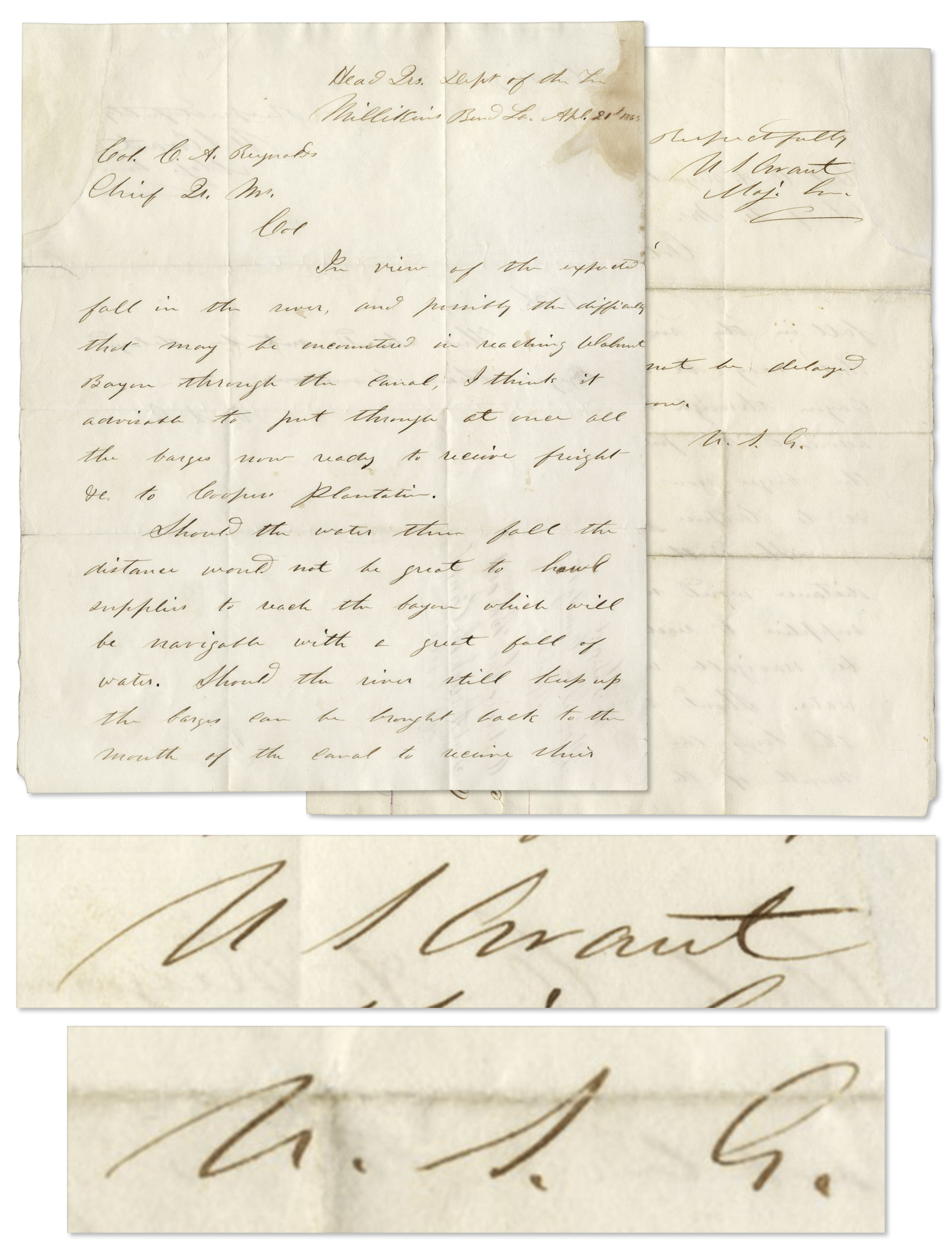 Ulysses S. Grant Autograph Letter Twice-Signed From 1863 — Grant Orders Barges to Be Sent Through Canal at the Height of the Civil War

U.S. Grant Autograph on a CDV Photo – With PSA/DNA COA

U.S. Grant autograph on a carte de visite photo, ”U.S. Grant / Lt. Gen. U.S.A.” upon the image. CDV by Brady measures 2.5” x 4”. Toning, slight peeling to upper right corner and evidence of prior mounting to verso, else near fine. Accompanied by PSA/DNA COA.  A U.S. Grant autograph is pricey when signed on a CDV. Sold for $2,500. 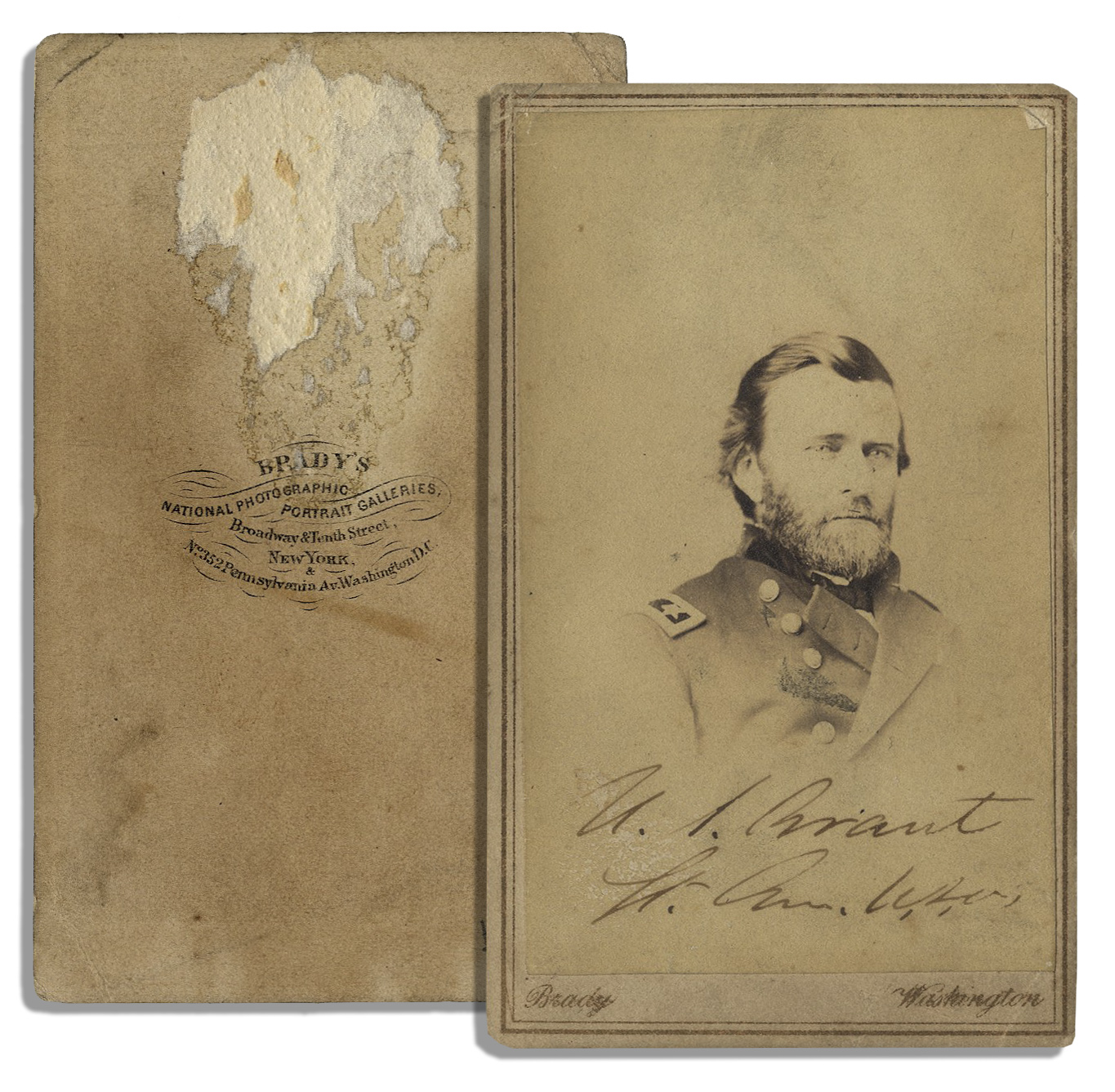 U.S. Grant Autograph Letter Signed in January 1865 — ”…lose no time in having the Commission commence…to investigate into the Norfolk trade matter…”

U.S. Grant autograph letter signed as General in Chief of the U.S. Armies. Letter, datelined City Point, Virginia, 19 January 1865 instructs General Edward O.C. Ord to appoint a Commission to investigate the controversial ”Norfolk trade” where officers under General Dix were illegally selling trade permits on the blockaded port. On Headquarters Armies of the United States letterhead, it reads in full: ”General, your private note of this date is rec’d. I think your suggestion to appoint a Commission to investigate into the Norfolk trade matter a good one. I could not suggest better names for the Permission than those named by you. Go on with it and lose no time in having the Commission commence its work. Very respectfully / U.S. Grant / Lt. Gen.” 2pp. letter measures 5” x 8”. Written neatly in slightly faded black ink. Framed to a size of 10.75” x 22”, with second page directly under the first. Tape markings to bottom of first page and top of second. Letter possibly mounted to board within frame. Chipping to frame. Overall very good condition.  A U.S. Grant autograph is rare dated during the Civil War.  Sold for $1,720. 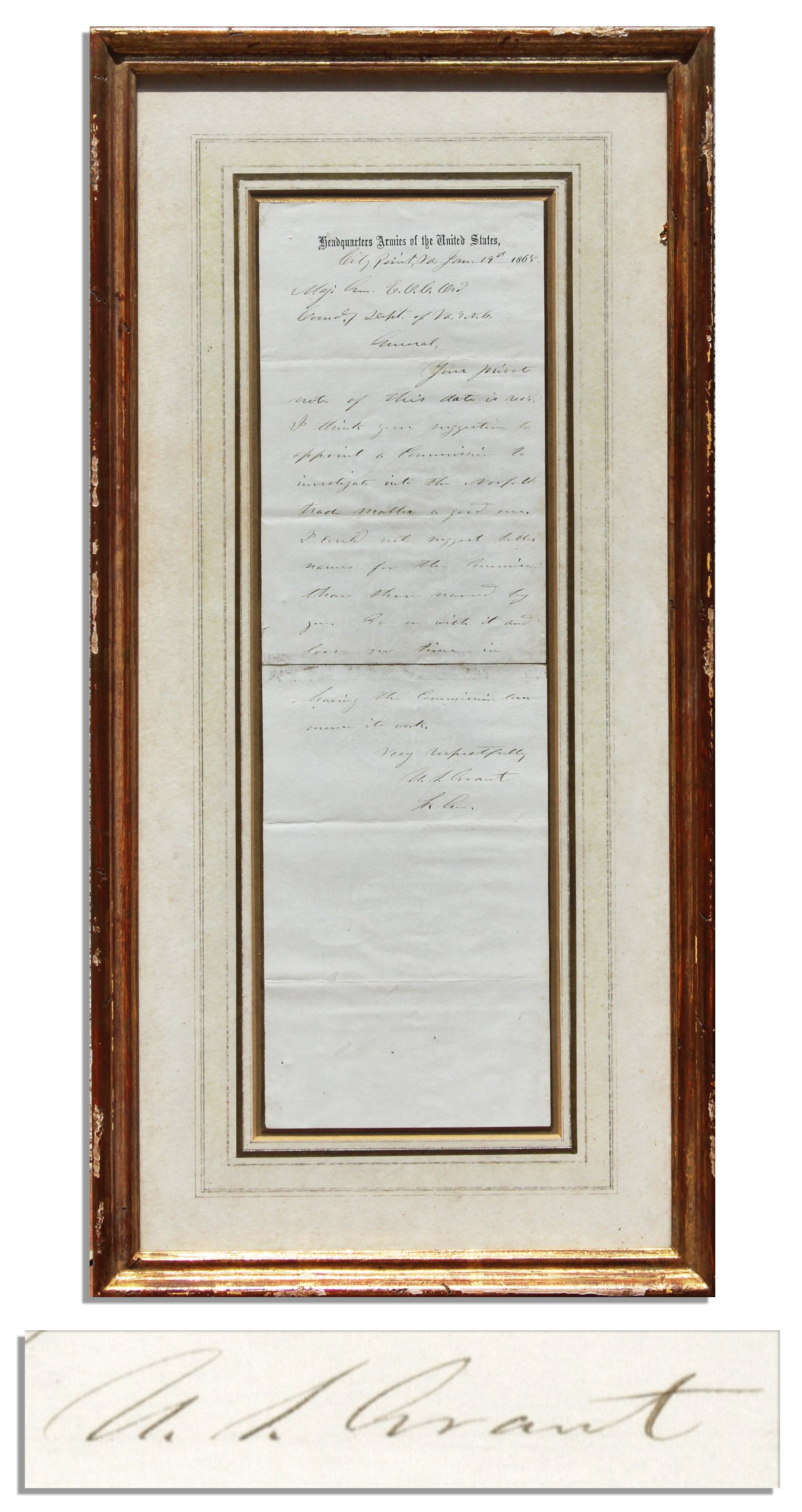 Ulysses S. Grant Autograph Letter Signed in January 1865 — ”…lose no time in having the Commission commence…to investigate into the Norfolk trade matter…”

U.S. Grant Autograph on a Naval Appointment as President — 1873

U.S. Grant autograph on a document as President. He signs ”US Grant” above his printed title ”President of the United States of America” at the top edge. Dated 25 March 1873, the document appoints Charles T. Forse to the position of Lieutenant in the U.S. Navy. The appointment took effect on 11 February 1873 and is made official here. A blue Department of the Navy seal is affixed to the bottom half atop an etched nautical scene. Single page document is countersigned by George Robeson as Secretary of the Navy. Measures 15.75” x 19.75”. Some creasing and staining across top right. In good to very good condition.  Bold U.S. Grant autograph. Sold for $1,343. 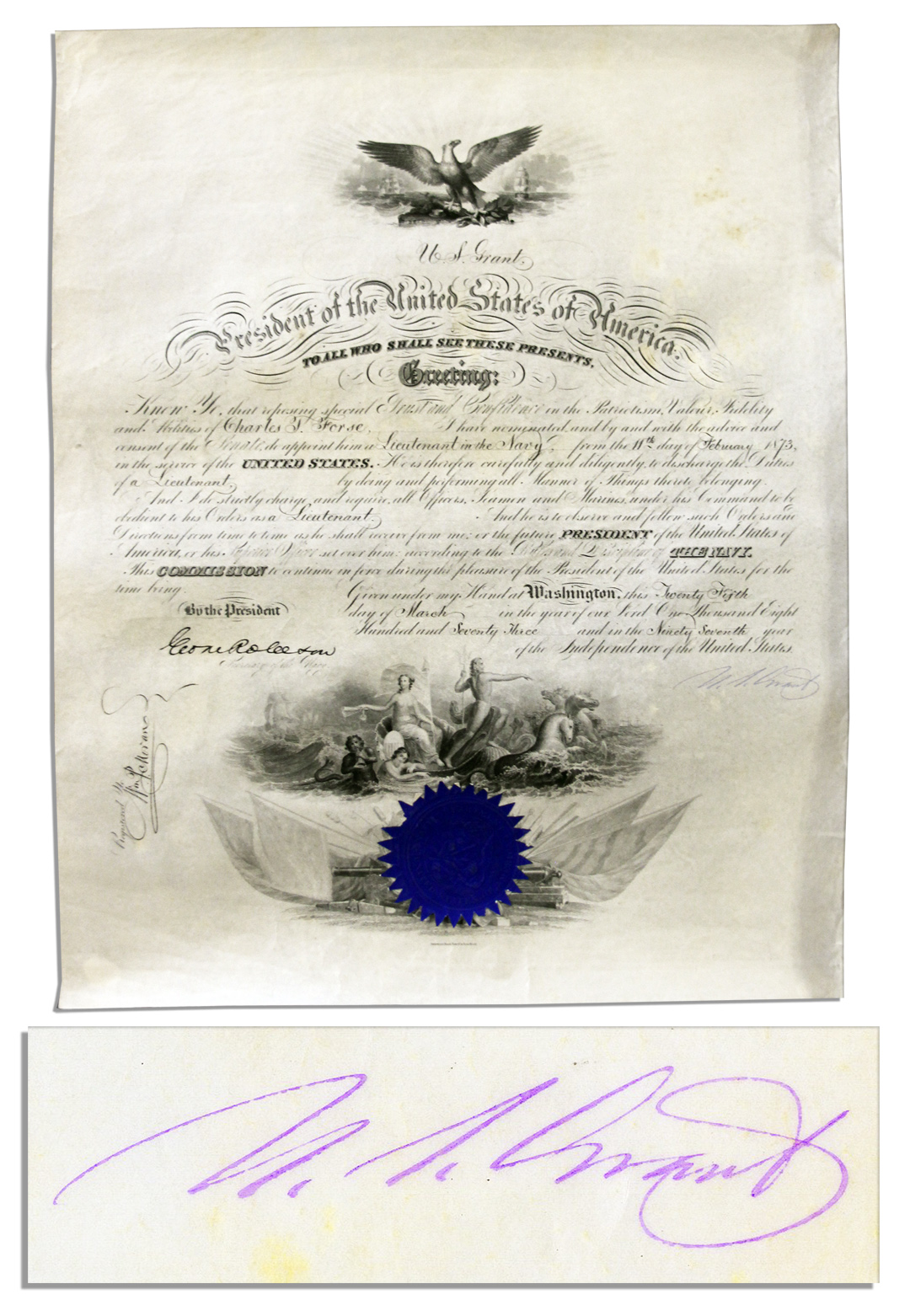 U.S. Grant Autograph on a Presidential Pardon From 1869 — During His First Year in Office

U.S. Grant autograph on a document, “U. S. Grant” as President. Dated 25 October 1869, document commands the secretary of State to pardon one Robert Wilson. Partially-printed single-page document measures approximately 6.5″ X 7.5″. Attractively matted and framed beside a handsome etching of Grant to an overall size of 19.5″ x 11.25″. Near fine.  Dark U.S. Grant autograph.  Sold for $1,249. 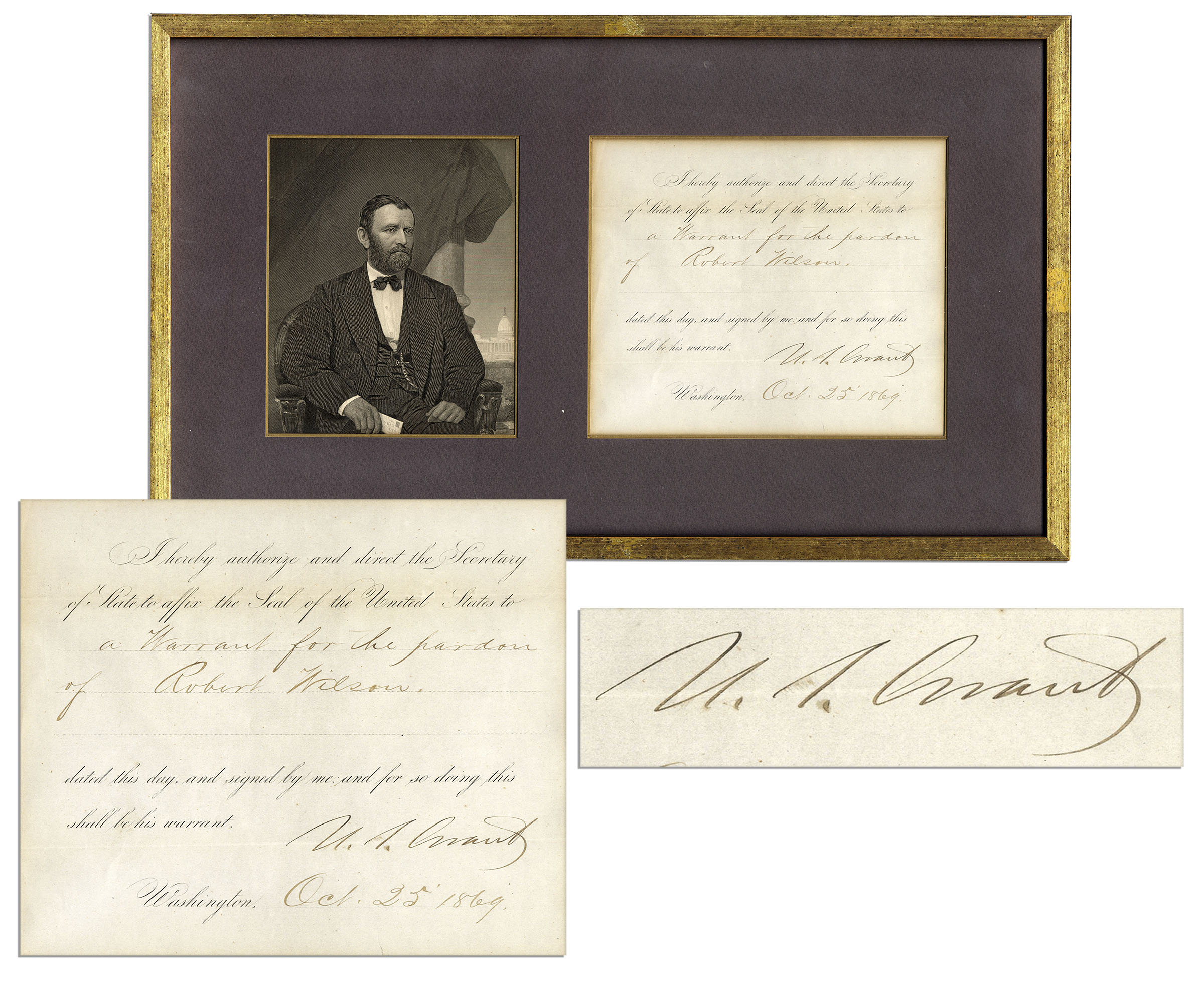 Ulysses S. Grant Presidential Pardon Signed From 1869 — During His First Year in Office

U.S. Grant Autograph on an Extradition Order as President

Ulysses S. Grant document signed as President. Dated 2 February 1877, the document calls for the extradition of Thomas Ellis. It reads in part: ”…Ellis charged with the crime of Forgery in the third degree…a fugitive from the justice of the United States, in the Dominion of Canada…take and hold him in your custody and conduct him from…the Dominion of Canada…into the United States, there to surrender…to the proper authorities of the State of New York…” A pearl color seal is affixed to the signed page. Partially printed document runs 2pp. on card-style stationery, measuring 10.75” x 15.5”. Separation along fold lines, archivally mended. Very good condition. Included is a 9” x 12” etching of Grant. Rare U.S. Grant autograph. Sold for $1,220. 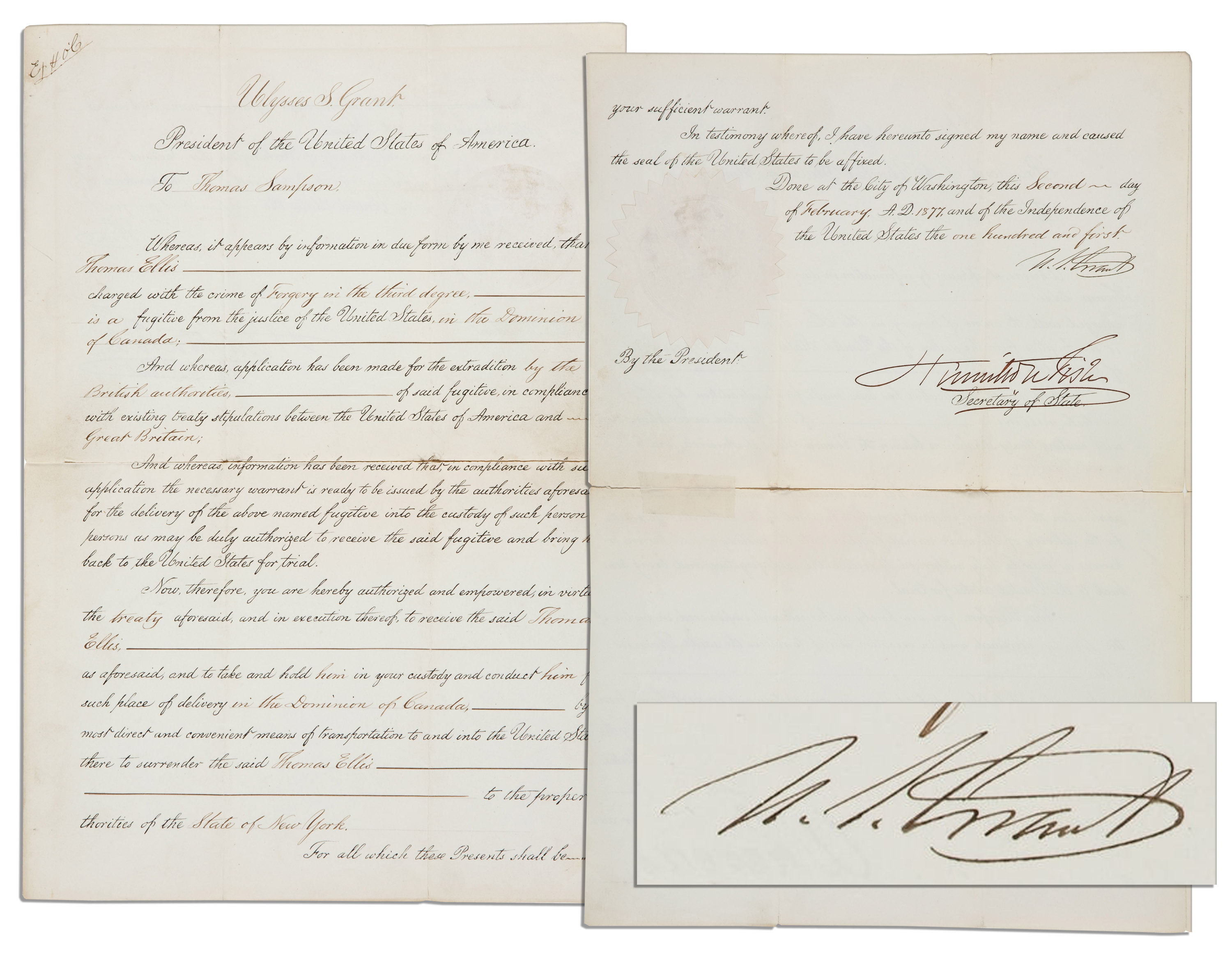 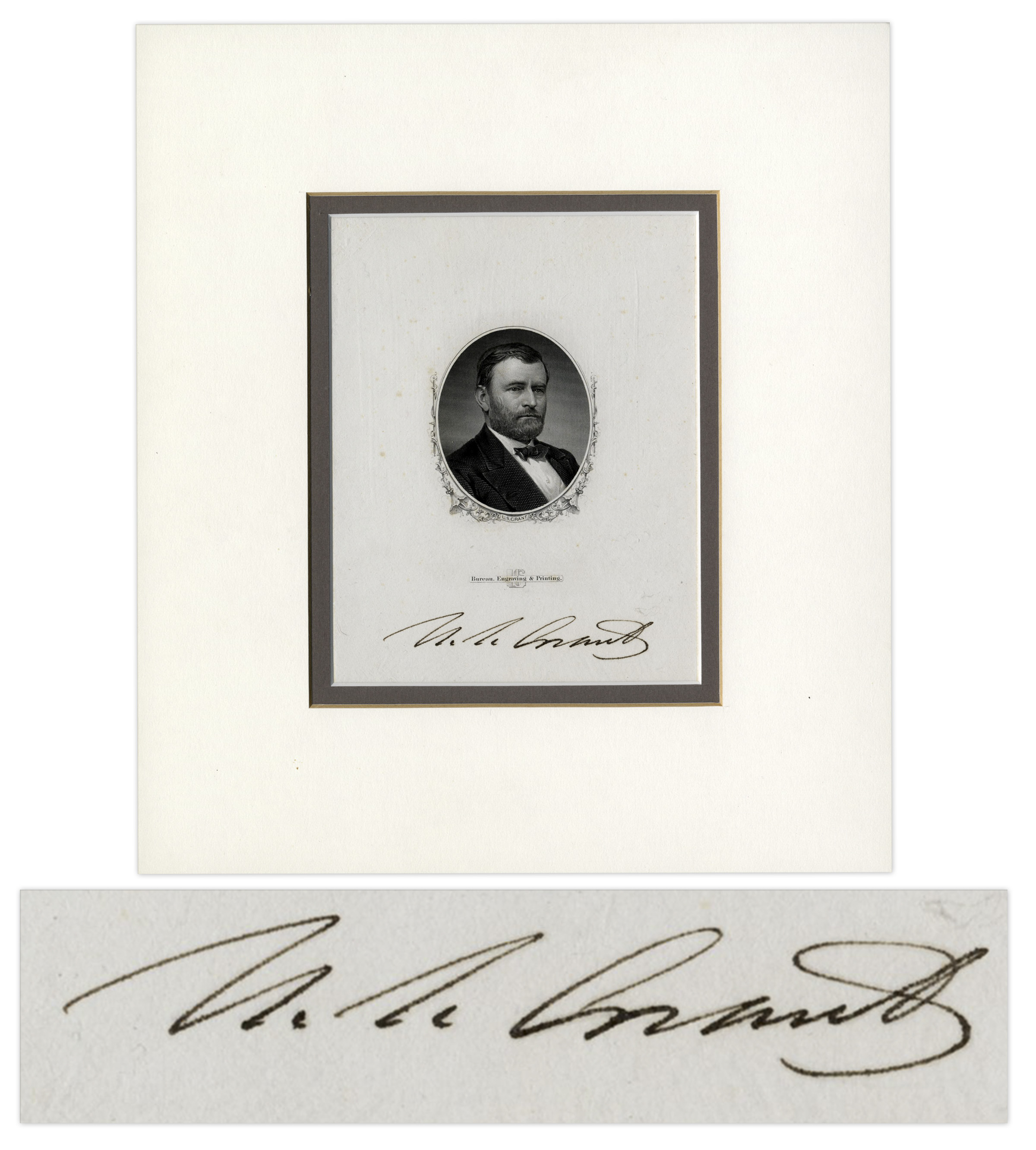 Ulysses S. Grant check signed as President, dated 28 November 1874. Composed on Grant’s personal check (with ”U.S. GRANT” printed on the side), the President signs ”U.S. Grant” upon this check payable to Grant’s longtime friend, Judge John F. Long for $367.50. Check is framed with a 1895 letter signed by Grant’s son, Frederick, who writes, ”…I was away from my father so little during his lifetime, that I have received very few letters from him. All of these…have long ago been given away, and now I am without such mementoes even for my own family. I have nothing but a few old checks with my father’s autograph upon them. I would be glad to cut the autograph off of one of these, and send it to you…” Check measures 7.25” x 3”, handsomely framed with an engraving of Grant and Frederick’s letter, to an overall size of 23.25” x 18”. Bold U.S. Grant autograph. Very good to near fine condition.  Sold for $1,000. 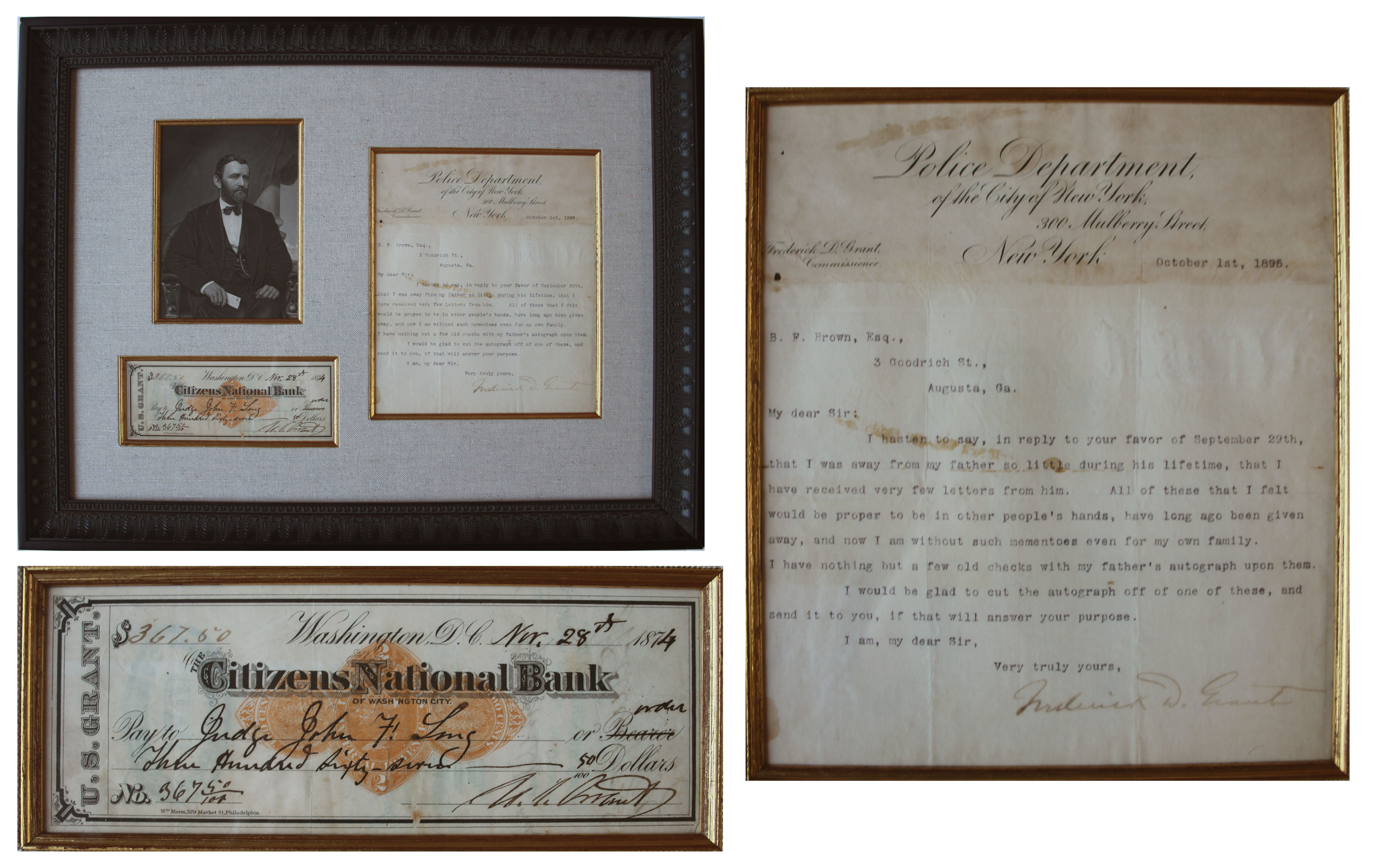 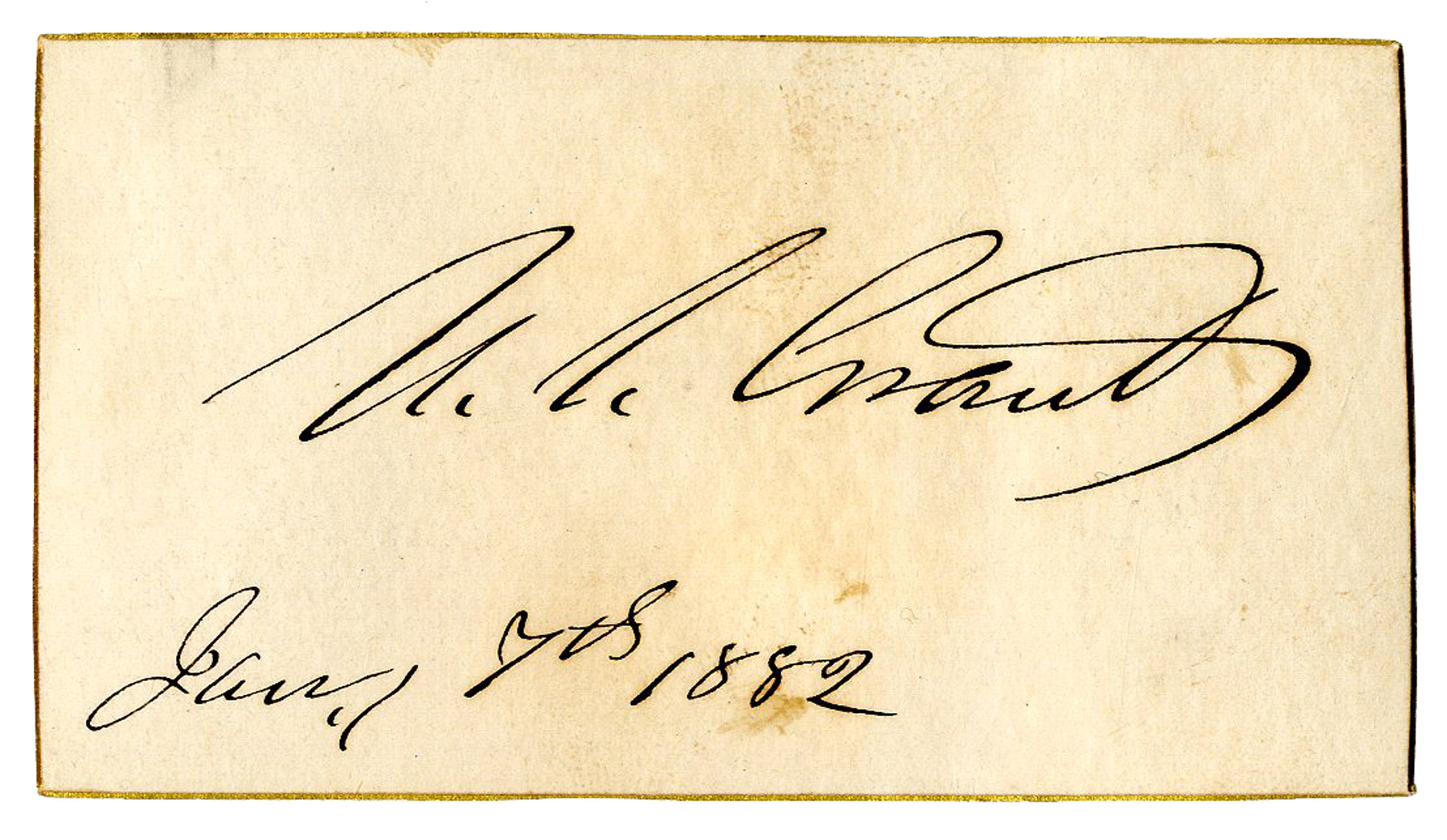