A Thomas Nelson Autograph, Declaration of Independence Signer, Is Desirable on a Letter

FREE VALUATION. To buy, consign or sell a Thomas Nelson autograph, please email Nate at Nate@NateDSanders.com or phone (310) 440-2982.  Thank you.

Rare Declaration Signer & Virginia Gov. Thomas Nelson Autograph Letter Signed One and a Half Months Before the Yorktown Surrender — ”…I think the game is nearly up with Cornwallis…” — 1781

Declaration of Independence signer, Thomas Nelson autograph letter signed, “Thos Nelson Jr.” as Governor of Virginia, thus Governor of the state where the Yorktown Surrender and the last fighting of the Revolutionary War happened. In this autograph letter signed, with an additional free frank signed, Nelson asks Brigadier General George Weedon to thwart disaster by taking care of supplying provisions for Washington’s Yorktown-bound army. Nelson personally fought in the Seige of Yorktown. Datelined Richmond, Virginia, 3 September 1781, letter reads: “…After congratulating you on the arrival of 28 French ships of the line, six frigates & 3000 troops, permit me to request your assistance for the support of a considerable army that are now on their march from the northward…Disappointment to so large an army would be attended with the most fatal effects. I think the game is nearly up with Cornwallis…” Large folio document runs one page and measures 8″ x 12.5″. Toning and light staining, with signed address leaf mounted to verso, else near fine. Published in Magazine of History, August 1910, pages 125-6. Provenance: Henkels Joshua I. Cohen sale, 12 November 1907, lot 122; collection of Adrian Joline; sold by Mary Benjamin to Allyn Kellogg Ford.  Sold for $23,116. 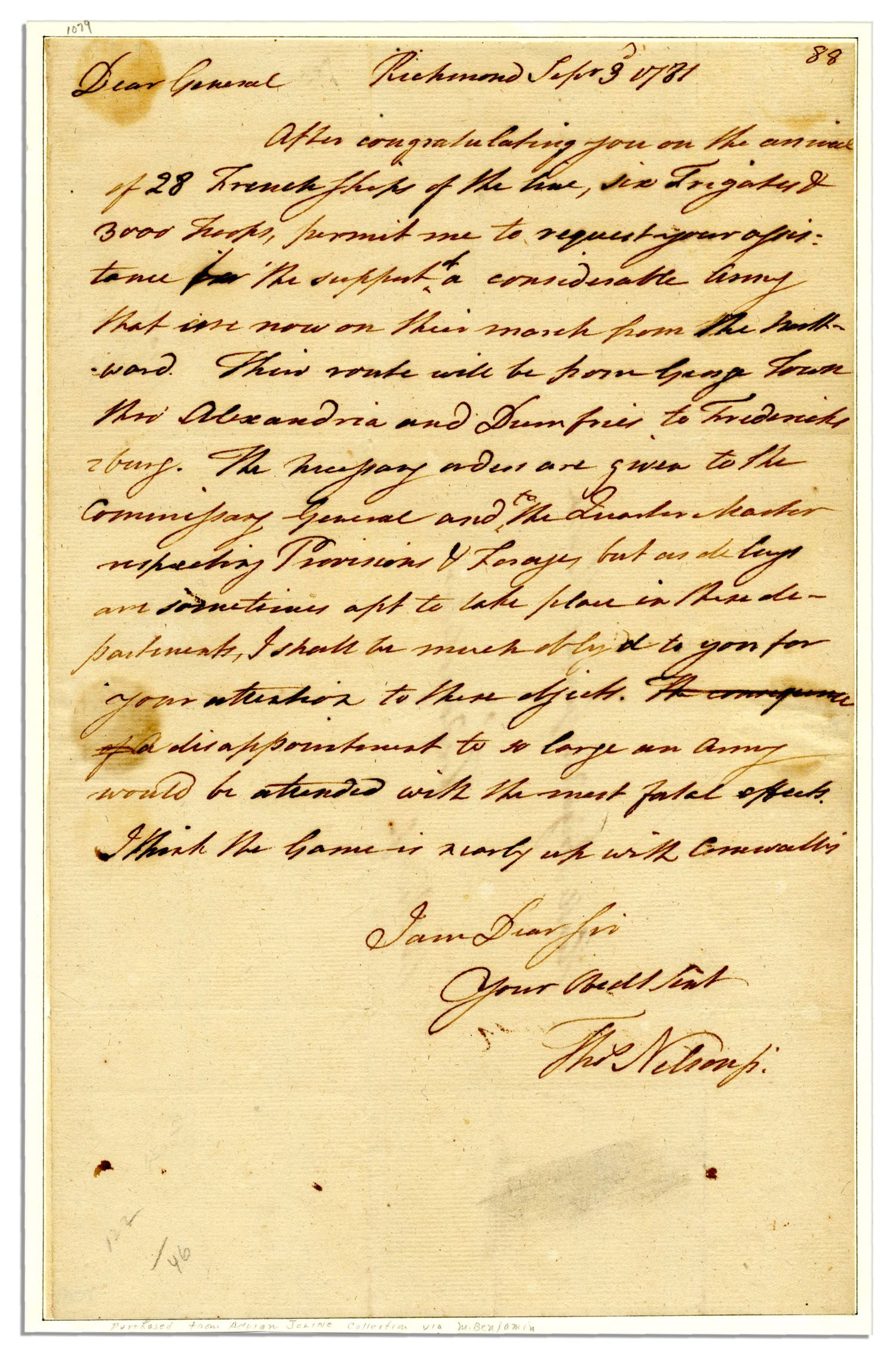 Lot #36:Rare Declaration Signer & Virginia Gov. Thomas Nelson Autograph Letter Signed One and a Half Months Before the Yorktown Surrender — ”…I think the game is nearly up with Cornwallis…” — 1781

Declaration of Independence signer Thomas Nelson letter signed, ”Thos Nelson Jr” as Brigadier General. From Williamsburg, Virginia, he writes to Brigadier General George Weedon concerning the whereabouts of Benedict Arnold and his men. Dated 14 January 1781, it reads: ”…Yesterday the enemy’s fleet passed Burwell’s Ferry, & is so far below it this morning as puts it almost beyond a doubt that they have no farther designs on this quarter…[but might] post at Portsmouth… [The militia at Nelson’s command is] fully sufficient to protect the county below between York & James Rivers from plundering parties…” Single page measures approximately 6.5” x 8.5”. Small tear near center and a small seal hole. Light toning and soiling. In very good to near fine condition.  Sold for $10,541. 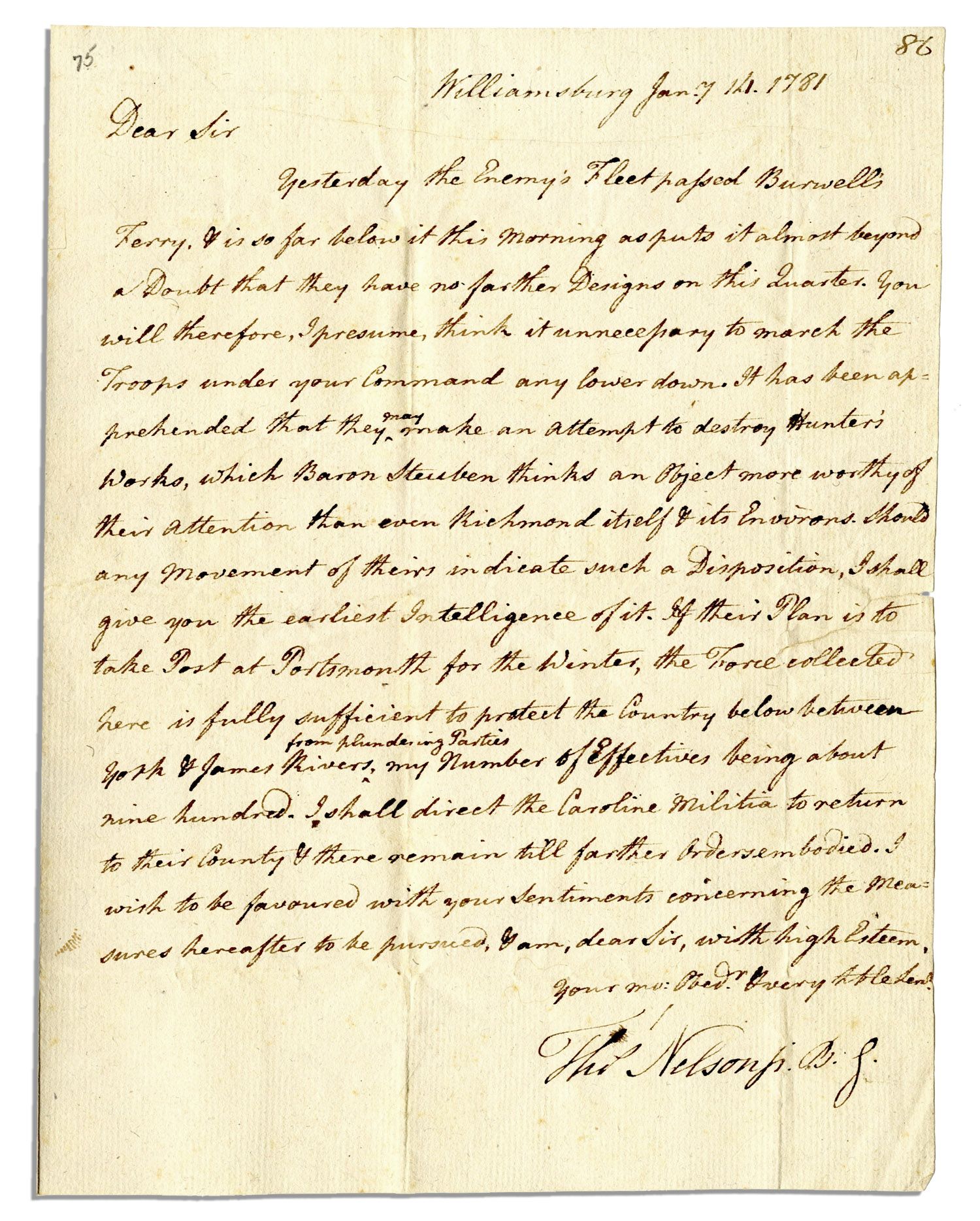 Autographed letter signed by Declaration signer, Thomas Nelson, Jr. Datelined Williamsburg, 31 December 1784, Nelson writes in part: “…I am requested by my intimate friend Capt. Singleton to give him a letter of introduction to your Excellency. Hearing that collectors are appointed to different districts, he intends to offer his services for the upper District of James River and as I know, you wish on all occasions, to reward singular merit, I the more cheerfully comply with Capt. Singletons desire. His behavior as an officer during the War gain’d him the esteem of the Army, and his conduct as a citizen, since that period has deservedly made every man who knows him his friend…” The letter’s recipient is unknown, though since Nelson is seeking a political favor regarding a minor civil servant’s position in Virginia, he is likely writing to Governor Patrick Henry. Nelson was an active patriot throughout the American Revolution; he sat in the Continental Congress, signed the Declaration of Independence and served as a General of the Virginia Militia. Letter measures 6″ x 8″ and runs 2pp. Toning and fading, else very good condition. Sold for $7,200.

FREE VALUATION. To buy, consign or sell a Thomas Nelson autograph, please email Nate at Nate@NateDSanders.com or phone (310) 440-2982.  Thank you.

We offer the following services for your Thomas Nelson autograph: