Nate D. Sanders Auctions Answers: “What is the Value of a Robert E. Lee Autograph?”

Robert E. Lee autograph letter signed to B.H. Wright on 18 January 1869.  Lee responds to a letter from Wright who, in hindsight, criticizes the Confederate Civil War strategy for the most famous battles including Gettysburg and Fredericksburg; letter from Wright included. Excerpt from Lee: “this failure of the Confederate army at Gettysburg was owing to a combination of circumstances but for which success might have been reasonably expected. It…seemed that Genl Burnside had good reasons for his move…to Fredericksburg & as far as I was able to judge the earlier arrival of his troops…would not have materially changed the result…all would only have produced an earlier concentration of the Confederate army at Fredericksburg. As regards Gen McClellan I have always entertained a high opinion of his capacity & have no reason to think that he omitted to do anything that was in his power. It is difficult for me to say what success would have attended the execution of your plan of moving the Federal army to Aquia Creek after its attack of Fredericksburg, & of threatening Richmond…& then entering the Rapahannock with the Main army. I do not think that the Confederate army would have retired to Richmond until the movement developed the necesity. After the accomplishment of an event, it is so easy with the aid of our after knowledge to correct moves that are from previous events…” Runs 2pp., 7″x 9″. The historic marvel is accompanied by Wright’s previous letter to Lee. In good condition. A true gem. Sold for $32,500. 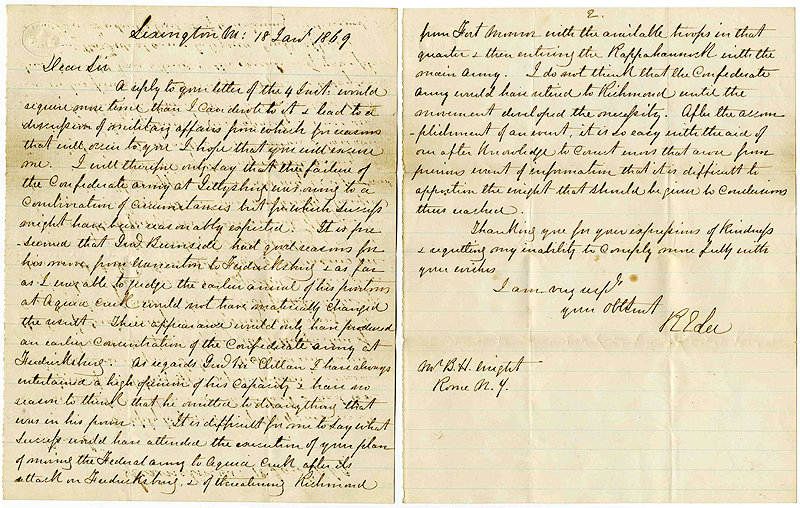 Commander of the Confederate Army during the Civil War, Robert E. Lee signed CDV photo, ”RE Lee”. In this photo taken by Richmond photographer J.W. Davies (famously referred to as the ”floppy tie” photograph), Lee wears his Confederate uniform featuring only three stars, signifying his rank of Colonel before the Civil War. During the war, Lee refused to wear a General’s insignia, preferring to wait until the South won the war and he could properly be promoted to General in the Confederate Army. CDV measures 2.75” x 4”. Handwritten notation and two-cent stamp to verso. Slightly trimmed along lower edge, only affecting mount. Light toning and wear, overall in very good condition with a bold signature. Sold for $5,625. 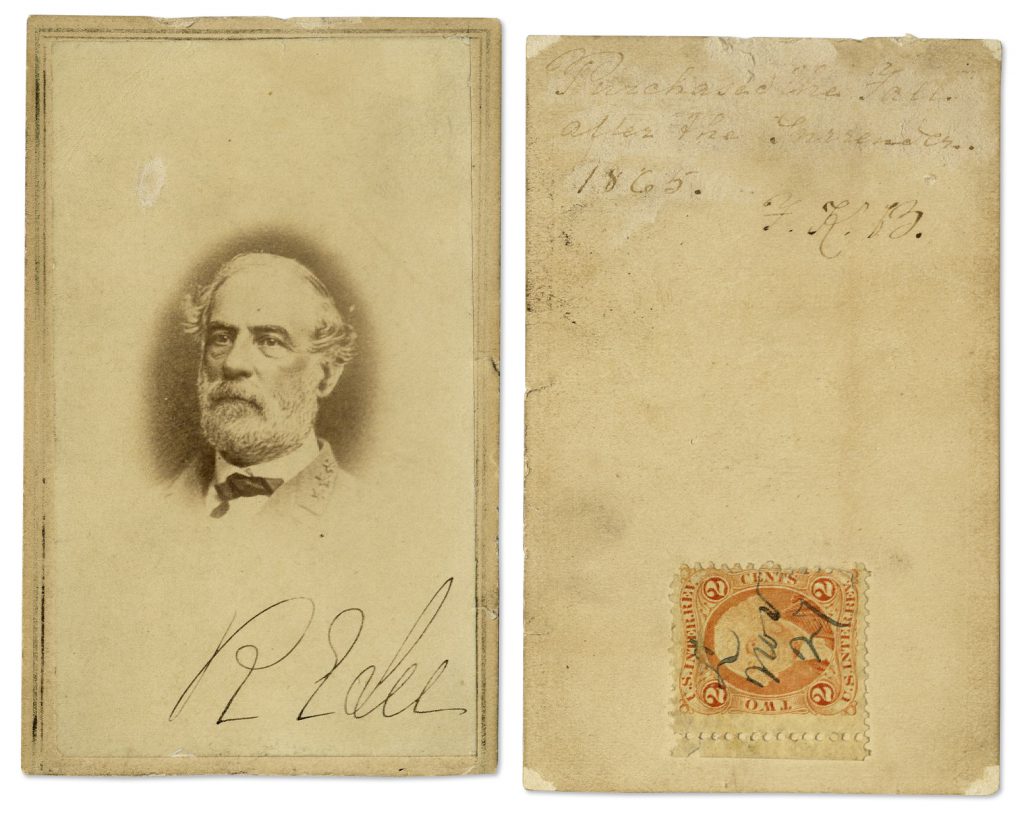 Commander-in-Chief of Confederate Armies, Robert E. Lee autograph document, dated early in the Civil War on 3 October 1861. Issued during Lee’s West Virginia campaign, location is noted as “Headquarters Camp on Sewell Mt.”, where Lee encamped after Cheat Mountain. Document gives “Special Orders” to General John B. Floyd that “The mail will be forwarded…letters of each regiment will be deposited with the regimental quartermaster who will cause them to be delivered…mail bags will be in charge of the quartermaster…felling of trees within the vicinity of the camp, except for firewood or other necessary purposes is strictly prohibited. Commanding officers will give special attention to this subject…” The Battle of Cheat Mountain, fought in mid-September 1861, was the first battle in which General Lee led troops. Document measures 7″ x 9.25″ on one page, with staining to upper left edge from mounting residue on verso. Very good condition.  Sold for $3,896. 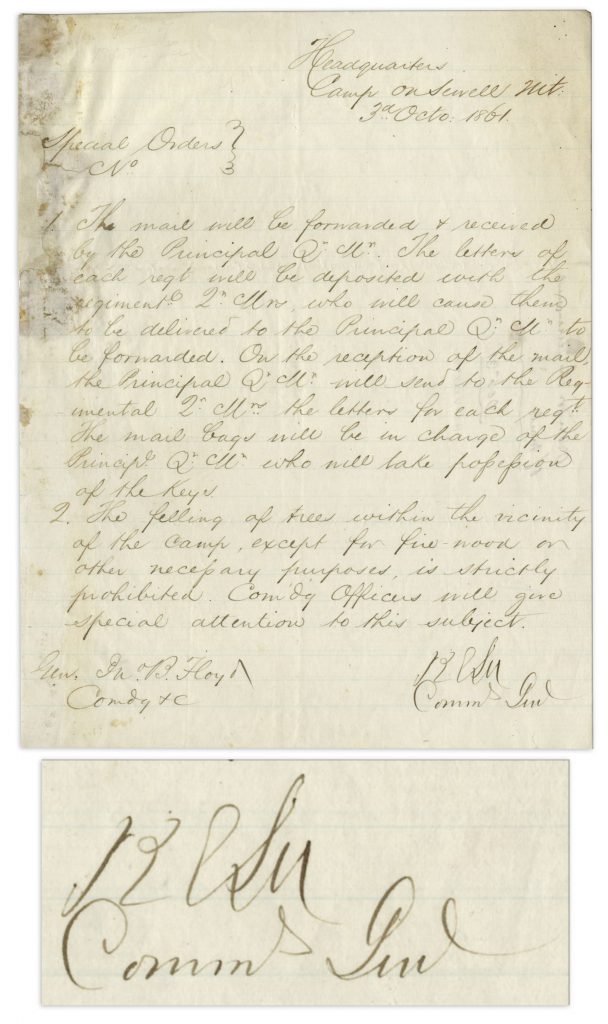 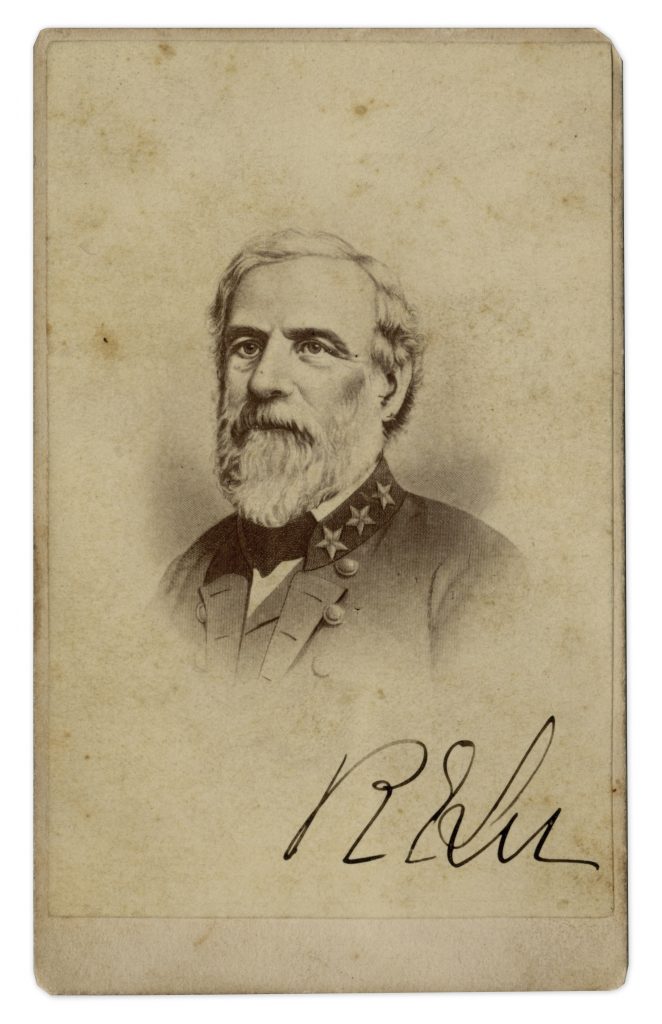 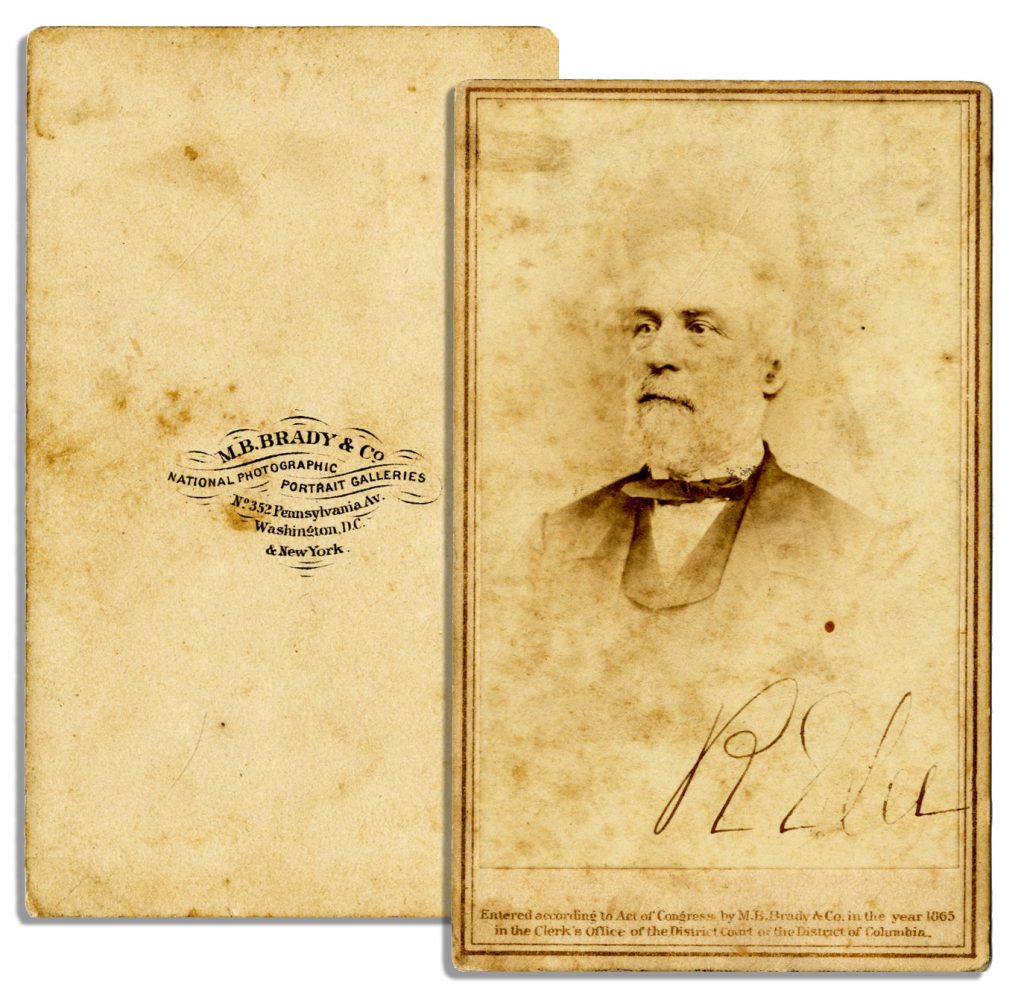 Confederate General Robert E. Lee’s original ”Funeral Obsequies” broadside program, dated 15 October 1870. Lee died on 12 October 1870 in the President’s house at Washington College, now Washington and Lee University, two weeks after suffering a stroke. Lee had been president of the school for four years, doing much to transform the college into a respected center of higher learning. He was buried in the basement of the Lee Memorial Chapel, situated on the college campus. The program lists the Order of Procession at the funeral: ”Escort of Honor, Consisting of Officers and Soldiers of the Confederate Army. Chaplain and other Clergy. Hearse and Pall-Bearers. General Lee’s Horse. The Attending Physicians. Trustees and Faculty of Washington College. Dignitaries of the State of Virginia. Visitors and Faculty of V. M. Institute. Other Representative Bodies and Distinguished Visitors. Alumni of Washington College. Citizens. Cadets V. M. Institute. Students Washington College As Guard of Honour.” It continues, in part, ”At 10 O’Clock, Precisely, The Procession (except as hereafter designated) will be formed on the College ground, in front of the President’s House and will move down Washington Street…The Procession will be halted in front of the Chapel…when the Cadets for the Institute and the Students of Washington College will be marched through the College Chapel, past the remains…After the funeral services are concluded in the Chapel, the body will be removed to the vault prepared for its reception, and the concluding services will be read by the Chaplain, from the bank on the Southern side of the Chapel, in front of the vault.” 1pp. document measures 8” x 10”, with some light soiling throughout, a 1.5” inch tear and small chip at bottom. Also includes a black satin mourning ribbon with small rosette. Very good condition overall.  Sold for $3,049. 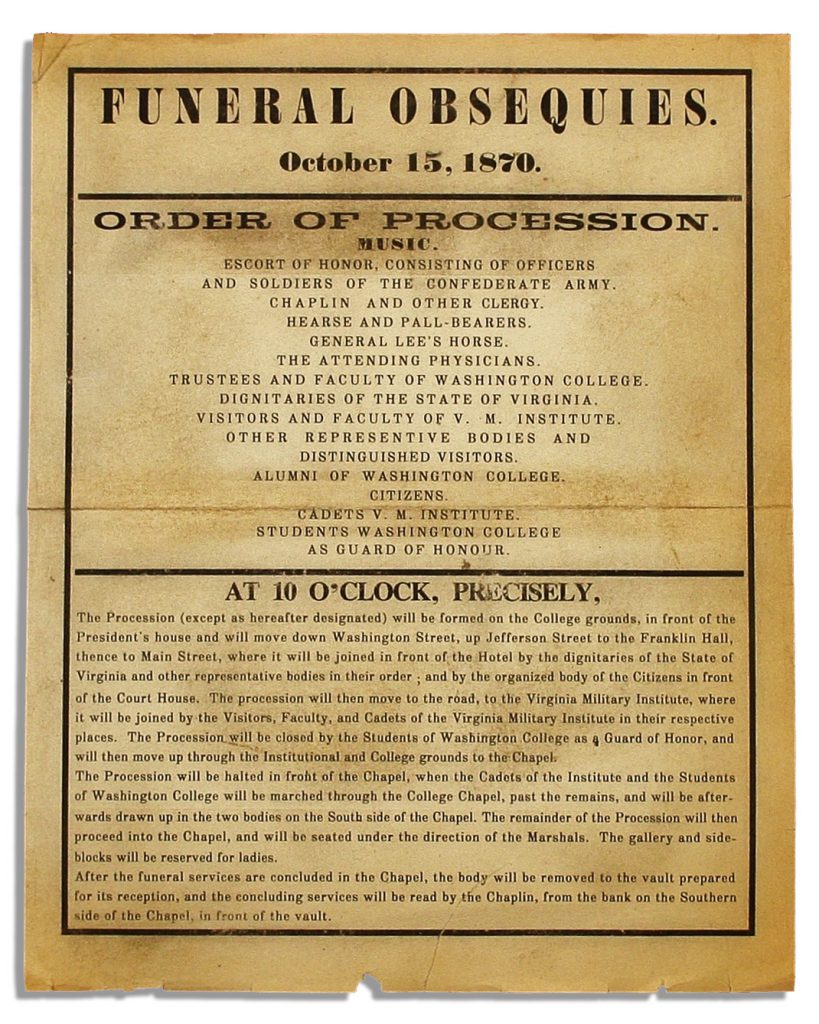 Robert E. Lee autograph by the Confederate General on a grainy photo. Original carte de visite of Lee is boldly signed ”R E Lee” at the lower right of his image. Circa 1866-1870 photo is mounted to a card printed ”Boude & Miley, Lexington, VA” by the photographers. Taken during his tenure as president of Washington College (now Washington and Lee University) in Lexington, the photo measures 2.5” x 4.25”. Small pinhole at top and foxing and fading to image. Signature itself is bold and near fine.  Sold for $3,049. 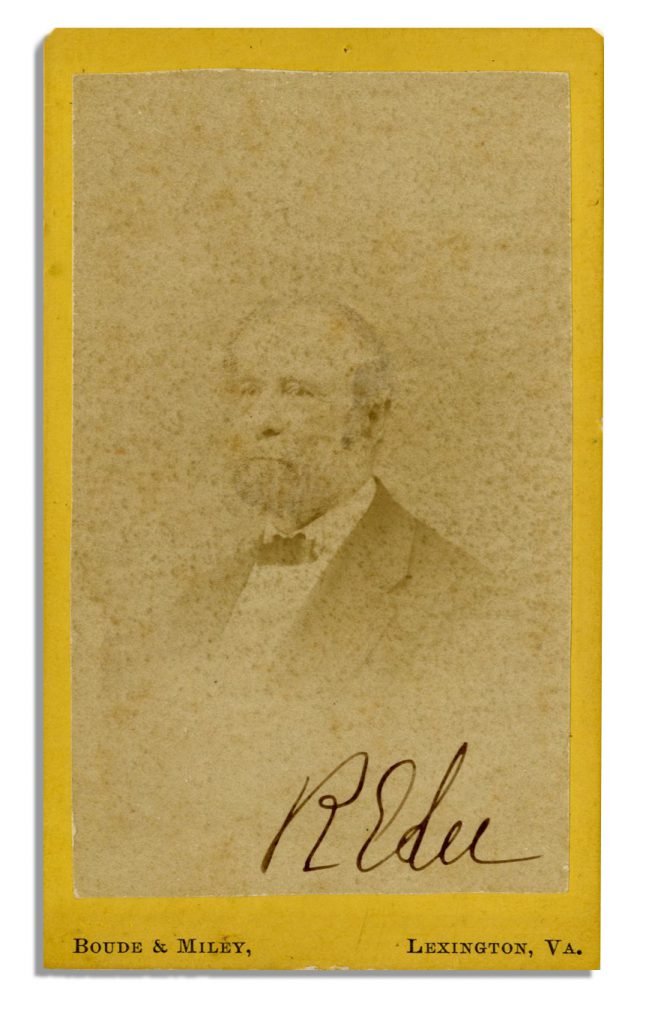 Robert E. Lee Document Signed — Signed While Lee Was Captain of the Army Corps of Engineers in 1838

Robert E. Lee autograph on a 1838 document. The future Confederate General spent approximately eleven years serving in the U.S. Army Corps of Engineers, and was promoted to the rank of Captain in 1837, where he oversaw projects related to the navigation of the Mississippi River. The sworn statement, clipped from a larger document, lists certain articles received by Lee’s regiment upon the verso. Document lists the date of 1838 and reads; “I Certify / That the articles charged in the within account have been received, were necessary for, and have been or will be applied, for the objects within stated, to the Improvement of the Harbor of St. Louis.” Lee signs “R.E. Lee / Captain” underneath the declaration. Measures 8″ x 2.5″. Toning and slight rust stain to upper left hand. Very good.  Sold for $1,614.

We offer the following services for your Robert E Lee autograph items: