We Sold a King Richard III Autograph in Bad Condition for $52,417

Incredibly Scarce Richard III Autograph Document Signed, Circa 1473 as Lord President of the Council of the North

Richard III autograph signet-sealed document signed ”R. Gloucestre” (Richard III autograph) as Duke of Gloucester, one of less than a dozen such documents signed with the others residing in public institutions. Richard’s brother, Edward IV, appointed Richard as Lord President of the Council of the North, which sought to exert greater governmental control over Northern England. Document is dated by title donned on Richard as ”Constable and Admyral of England” instead of ”Great Chamberlain,” which dates the document circa 1473-77. As Duke of Gloucester in his early 20’s, Richard III was given many responsibilities by his brother, becoming a powerful landowner and political force to be reckoned with in the north, further establishing his future reign as King of England. Document illuminates his growing power as he hereby intervenes in a land dispute between Ralph Neville, 2nd Earl of Westmorland and some of his tenants. Countersigned by the Duke’s secretary, John Kendal. Document is addressed to Sir Robert Claxton, William Claxton, Richard Bainbridge, ”and other of the ‘Counsell of our right entierly beloved Cousyn Therl of Wesm[or]land’, Pontefract, 22 April n.y. [1473 or 1476-77]”. Reads in part: ”c[er]ten cont[ro]v[er]sie’ between William Trotter, ‘ferrour’ [‘smith’?], Hugh Ile and others on the one hand and William Hunter and Robert Comyn on the other, concerning leaseholds belonging to the Earl of Westmorland. He writes now to a larger group of Westmorland councillors, asking that they examine the petitioners and settle the dispute according to their own discretion, so th[a]t neyther p[ar]tie have cause to sue unto us for remedy in that behalve heraft[er].” Measures 11.75” x 7” on one page. Framed to an overall size of 18.5″ x 14.25″; frame has a drawer that pulls up from the top edge holding a transcript of the document and a biography of Richard III. Document has been archivally restored, though still has paper loss to right side and various holes and chips throughout. Overall very good condition for such a preserved document. Document is exceedingly rare, one of only three documents signed by Richard III to come up for auction in the last 30 years.   A very rare Richard III autograph.  Sold for for $52,417. 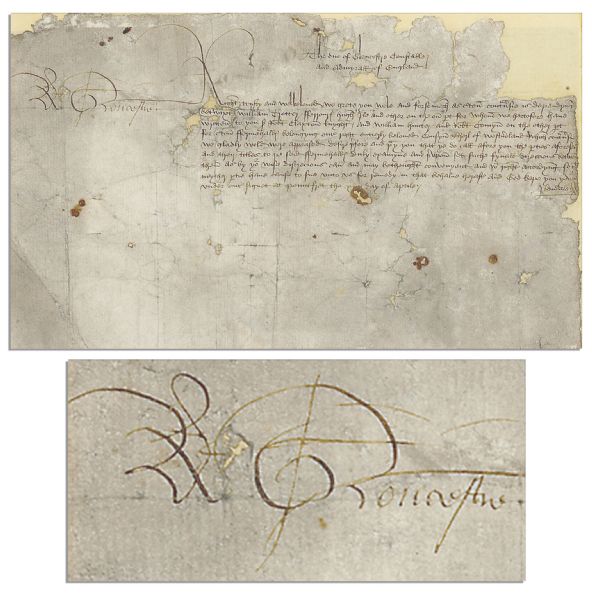 Incredibly Scarce Richard III Autograph on a Document, Circa 1473 as Lord President of the Council of the North

We have also sold some of the other most famous British monarchs:

Henry VIII Document Signed in 1512, Gathering Troops to Invade France — ”…[Those who do not report for duty are] to be…punished…”

Important Henry VIII order signed ”Henry R”, as King of England and Ireland, commanding Sir Charles Brandon to gather troops in preparation for his planned invasion of France, as part of the Italian Wars. Dated 16 September 1512, only three years into his reign, Henry VIII here takes advantage of the Pope’s ”Holy League” against France to expand his territory in the northern part of that country. To that end, he orders the mustering of troops from the counties of Carnarvon, Merioneth, and Anglesey in Wales. Its compelling text reads in part: ”…’cause asmany of thaym as bee hable men for the warre to bee sufficiently furnisshed of thaire harneys and to bee always in arredynesse to doo unto us s[e]rvice under yo[u]r ledyng…” Those who refuse are ”…to be condignely punisshed according to his or thaire demerits in example of other that wolde semblably presume toffende herafter…” Sir Brandon, to whom this order is directed, went on to become the 1st Duke of Suffolk following success in August 1513 at the Battle of the Spurs — using the men culled from this initiative. A red seal is affixed to bottom center. Single page runs 16 lines on vellum and measures 11.25″ x 6.5″. Toning, creasing and some light staining, else near fine. An important document in the early years of the Italian Wars, which raged for more than sixty years, ultimately involving most of Europe in a complex conflict that spawned wars within wars.  Sold for $40,954. 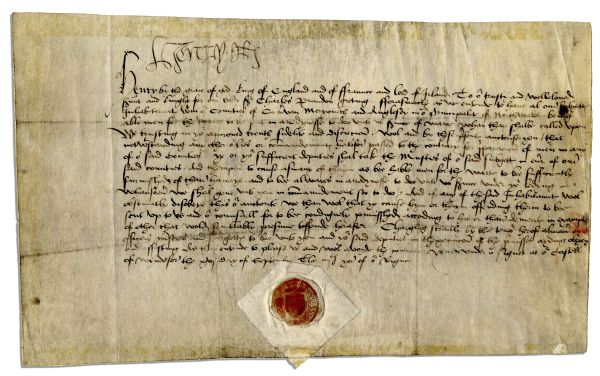 Exceptional Queen Elizabeth I document signed, concerning the need for additional troops during the Nine Years War in Ireland in 1599. Fought from 1594-1603, the Nine Years’ War (also called Tyrone’s Rebellion), was the largest English conflict in the Elizabethan era, with England committing 18,000 troops to combat Gaelic Irish chieftains opposed to English rule. In this document, dated 4 June 1599, Queen Elizabeth writes to Lord Roger North, referring to him as the ”Treasurer of our Household and Lord Lieutenant of Oure Countie of Cambridge”. The Lord Lieutenant of Cambridgeshire served as the Monarch’s personal representative for the counties of the United Kingdom, which in this case included all of Ireland. Document reads in part, “Right trusty and wellbeloved Counsellor wee greet yow well…our present Service in Irland requireth that there should be a speedy supply made of a certen nomber of men to be sent thither for the reinforcement and filling up of ye bands already gone [the Earl of Essex had taken a large contingent to Ireland earlier the same year] which upon occasion may from tyme to tyme grow weake and be diminished through sicknes or otherwise: for which purpose wee have resolved to have the nomber of two thousand men to be taken out of some speciall Counties of this our Realme, and put in readines for our Service aforesayd: wee therefore will and require yow with all expedition to Cause the nomber of fifty hable men within that our County of Cambridge, to be levyed, mustered, furnished with apparell or sorted with armour or weapons in such sort as yow shalbe directed by our Counsell. And for ye tyme of delading them on to such Captens and leaders, as they shall name unto yow to have the Charge to Conduct them to ye place of their imbarquing, As also for their Coate and Conduct and other necessaries, yow shall likewise follow such farther directions as yow shall receive them from our sayd Counsell. And these…shalbe your sufficient warrant and discharge…Given under our Signet at our Mannor of Greenwich the fourth day of June 1599…” Document features large, ornate ”Elizabeth R” signature at top, along with seal from the Queen. Docketing by recipient and integral address leaf to verso. Folds and toning, but in otherwise exceptional condition for a document of its age. Very good to near fine.  Sold for $27,500. 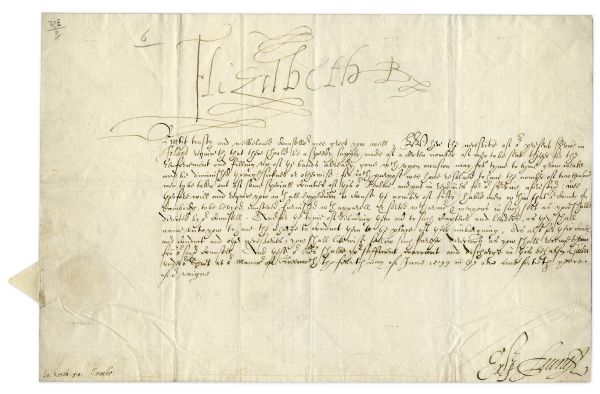 Mary Queen of Scots document signed, ”Marie R”. Vellum document is datelined February 1582, Sheffield Castle, where Mary was confined by Queen Elizabeth I. The Throckmorton plot to kill and supplant Elizabeth with Mary was underway as the time of this document, which appoints John Botz to the prebend at Bitcry: ”Today, on the [blank] day of February, in the year of 1582, the Queen of Scotland, Doweress of France, being at the Castle of Sheffield in England, on the strength of the recommendation which has been made to her…of John Botz, granted and awarded to him the first Prebend which shall fall due hereafter, and a vacancy at Bitcry being in her Majesty’s disposal, she desires and orders…the letters of Investiture be sent to the said Botz…” Document measures 15.5” x 3.5”. Ink and pencil notations to verso. Creasing, a few tiny worming holes and minor scattered soiling. Overall near fine given age.  Sold for $12,500.