Silver photo frame gifted by Queen Victoria to one of her great-grandchildren. Pocket frame is engraved diagonally across the cover, ”From Great Grandmama V.R.I. 24th May 1899”. Case opens with a sliding cover decorated with an applied gold design to the upper left. Inside is an oval-shaped photo of the Queen. Case bears the maker’s mark of W. R. Wright for Wright & Davis, and a British hallmark. Measures approximately 3” x 2” x 0.25”. Near fine. With provenance from Sotheby’s 1987 Geneva, Switzerland sale of the Jewels of the Duchess of Windsor. The best Queen Victoria memorabilia that we have sold.  Sold for $17,840. 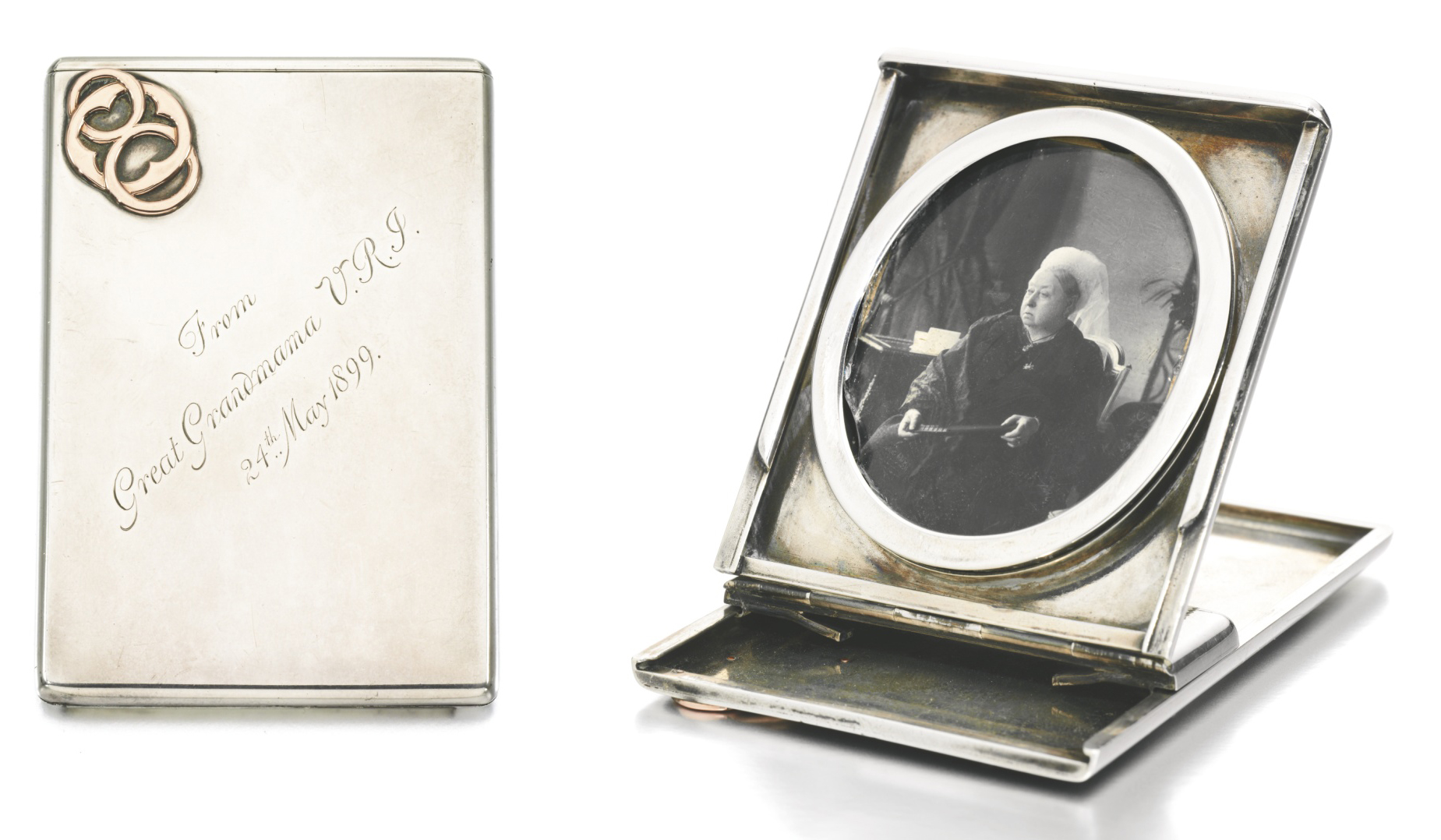 Queen Victoria personally owned and worn silk stockings, monogrammed with a ”VR” (Victoria Regina) and crested with regal crown. Each stocking is numbered 14, as a number system was in place so the Royal would wear her undergarments in rotation. Stockings, originally from the Queen’s Balmoral Castle in Scotland, are from the estate of Christina Symon, one of the Queen’s dear friends. Black socks with ivory top measure 9” across the foot and 31” in length. Some dirtying and wear to bottom of feet, most likely from age. Else very good condition for such an unique item. Unique Queen Victoria memorabilia. Sold for $6,336. 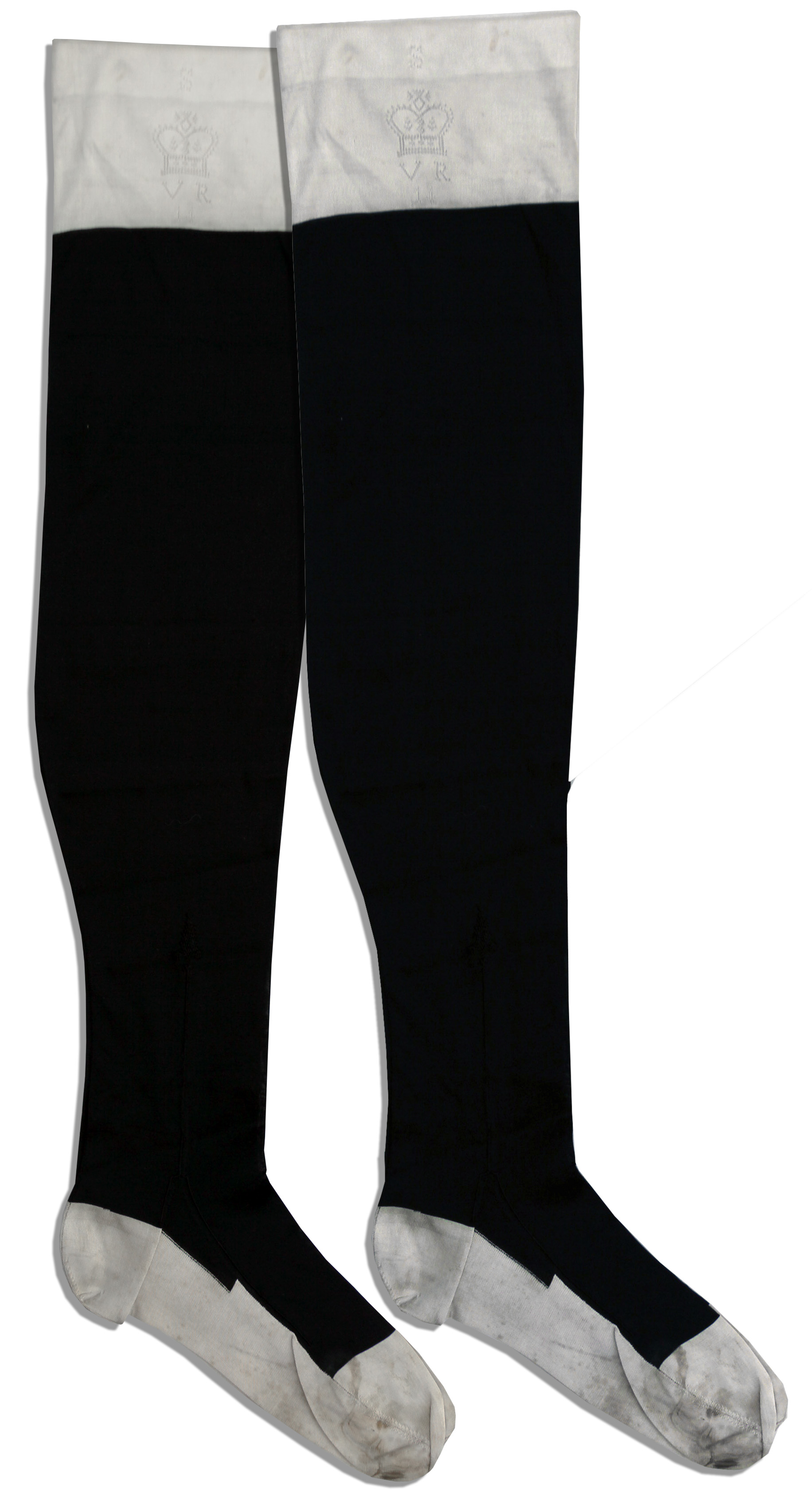 England’s monarch inscribes the uppermost portion of a royal summons: ”Victoria R” as Queen. The Queen Victoria autograph document commands the presence of Lord Bishop James Henry to the Royal Coronation on 28 June 1838. Summons dated 9 May 1838 reads in part: ”…These are to Will and Command you (all excuses set apart) to make your personal attendance you are not to fail…” Measures 8” x 12”. One closed tear runs from the bottom edge to the middle of the document. Some discoloration and a smudge to the signature. Overall very good condition. Dark Queen Victoria autograph and important Queen Victoria memorabilia from her Coronation. Sold for $3,120. 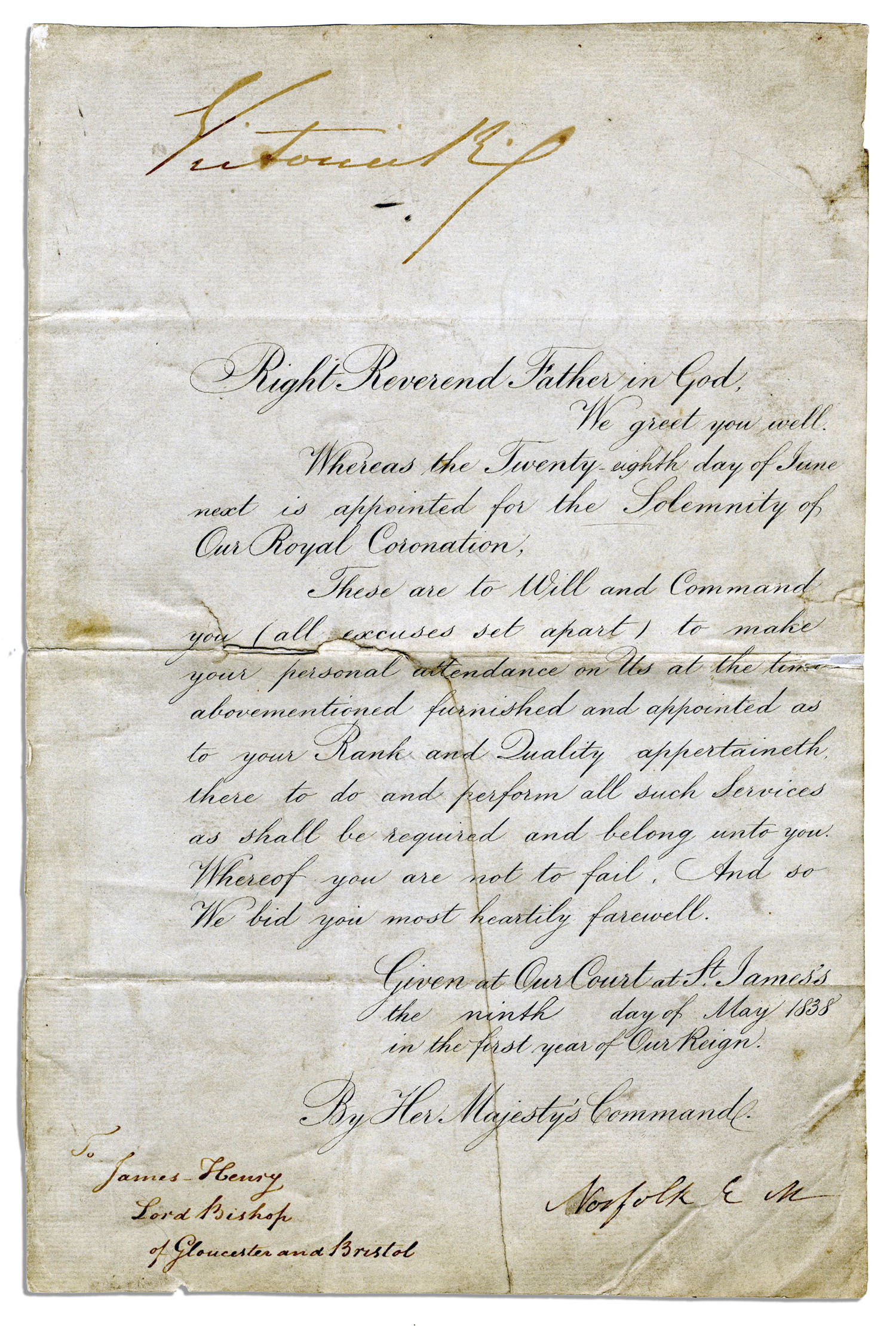 Queen Victoria Signed Book, Dedicated in Her Hand to Her Son Prince Leopold — Who Died of Hemophilia at Age 30

German language book gifted to Prince Leopold by his mother Queen Victoria and bearing her Queen Victoria autograph inscription signed. Queen Victoria’s dedication in ink to the fly-leaf reads in full, “To / dearest Leopold / from / his most affectionate / Mama / VR / Osborne / Jan. 1. 1870 – “. Regal volume is in German, with title translating to “German Artist Album…With Works of Living Artists & Poets”, Berlag von Breidenbach & Comp., Dusseldorf, Germany: 1870. Queen Victoria was the last English monarch in the House of Hanover line of German royalty. Sadly, Prince Leopold died at age 30 of the genetic blood disorder hemophilia. Bound in red paper boards with green design and gilt lettering. All edges gilt. Measures 10.25″ x 13″. Prior owner’s bookplate to front pastedown and pencil notations on front free endpaper. Chipping to board corners, and foxing to leaves, else near fine. From the estate of Helen Hayes. Bold Queen Victoria autograph and superb Queen Victoria memorabilia. Sold for $1,562 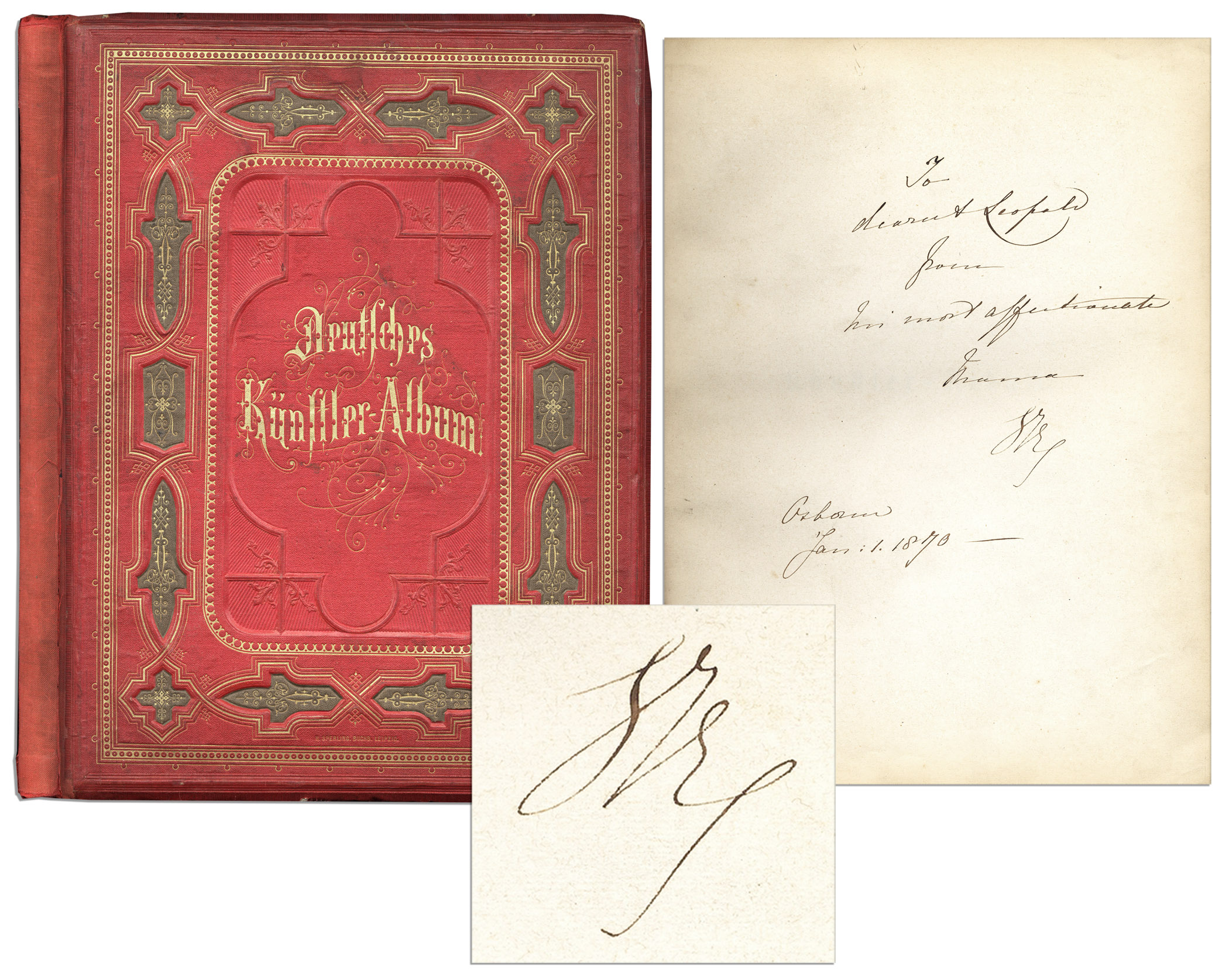 Queen Victoria Signed Book, Dedicated in Her Hand to Her Son Prince Leopold — Who Died of Hemophilia at Age 30 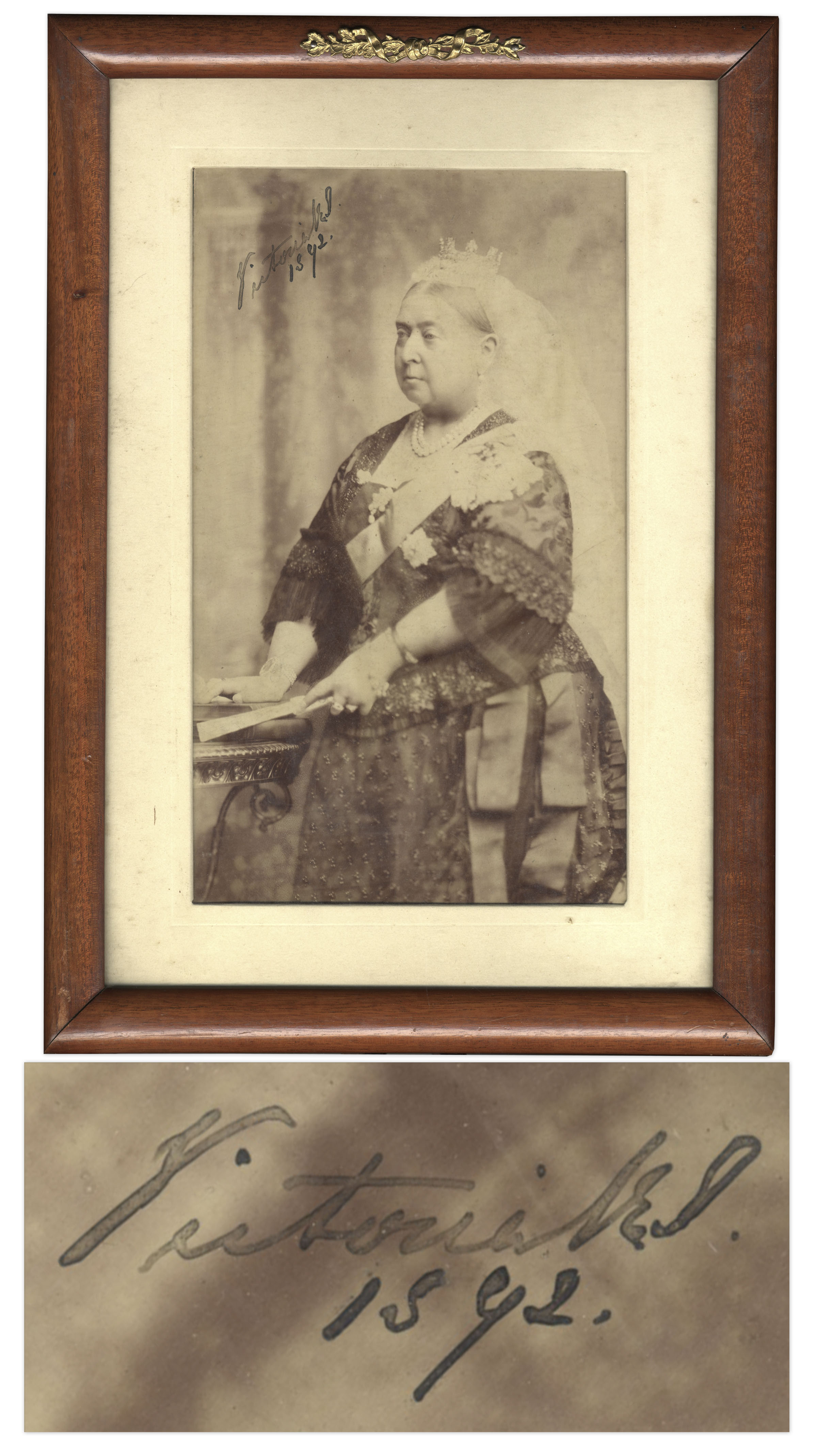 Queen Victoria autograph on an army commission, dated 26 June 1855, during the Crimean War. The Queen appoints Colonel Edward John Fryer to the rank of ”…Ensign in our rifle brigade…” She signs in the upper left corner above an intact blindstamped seal. Countersigned by Secretary of War, The Lord Panmure. Also includes original blue ”one pound, ten shilling” stamp affixed to the left edge. Document measures 14” x 9.5”, with four vertical creases from folding and minor toning throughout. Near fine condition. A 10 out of 10 for the Queen Victoria autograph. Sold for $1,220. 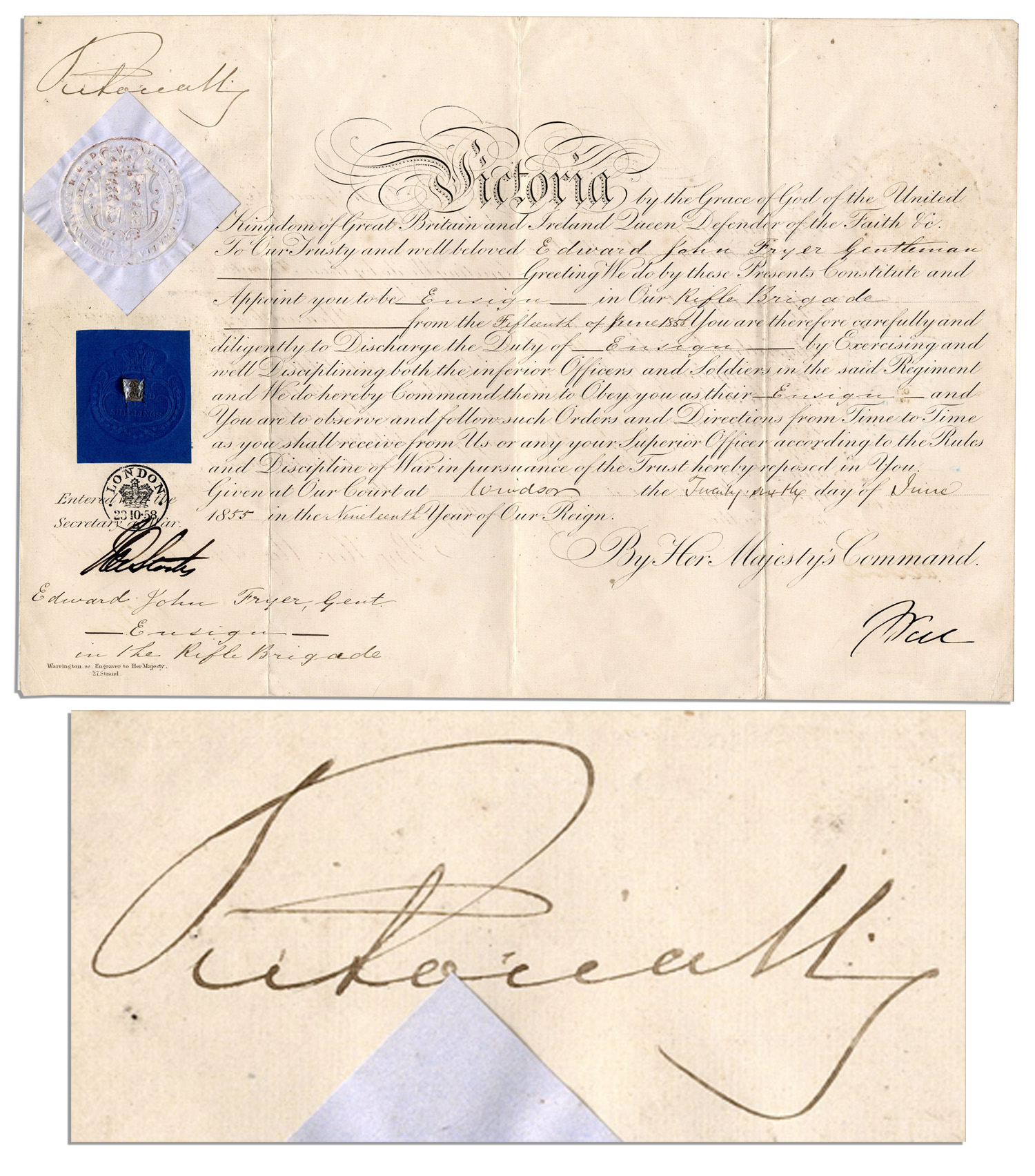