Sell or Auction Your Norman Rockwell Painting for up to Millions at Nate D. Sanders Auctions

FREE APPRAISAL.  To auction, buy, consign or sell an original Norman Rockwell painting, especially a Saturday Evening Post Norman Rockwell painting or large canvases for up to $50,000,000 (50 million dollars), please go to http://www.NateDSanders.com, email your photos and description to Nate at Nate@NateDSanders.com.  1. Interest free cash advances are available, 2. you can name a high reserve. No other auction house will give you those terms, especially the high reserve.

Your original Norman Rockwell painting can be worth millions of dollars.

In May 2018 we sold the following Norman Rockwell painting:

Norman Rockwell oil on canvas painting of Richard Nixon, signed ”Norman / Rockwell” at lower right. Painting is the study for ”Mr. President (Richard Nixon)”, which resides in the National Portrait Gallery, Smithsonian Institution, and was published in the 4 February 1969 issue of ”Look” magazine, captioned ”Weighed, yet buoyed, by the American past and present, Richard M. Nixon, 37th President, faces the future in this Rockwell portrait”.

Rockwell painted this study in late 1968 of then President-Elect Richard Nixon, a man whose portrait he found ”elusive” but whose features here are unmistakenly Nixon, revealing at the same time both the guardedness and warmth of the 37th President. As the premiere portraitist of the 20th century, one would expect no less from Rockwell. Oil on canvas measures 14” x 11”. Provenance is from Judy Goffman Fine Art of New York, and then subsequently the Charles E. Sigety Collection. Exhibited at the Mississippi Museum of Art in ”Norman Rockwell: The Great American Storyteller” from 2 March-15 May 1988, no. 64. Painting is in very good condition, with a stretcher bar mark along upper edge. Wax lined, with no inpainting. Sold for $125,000. 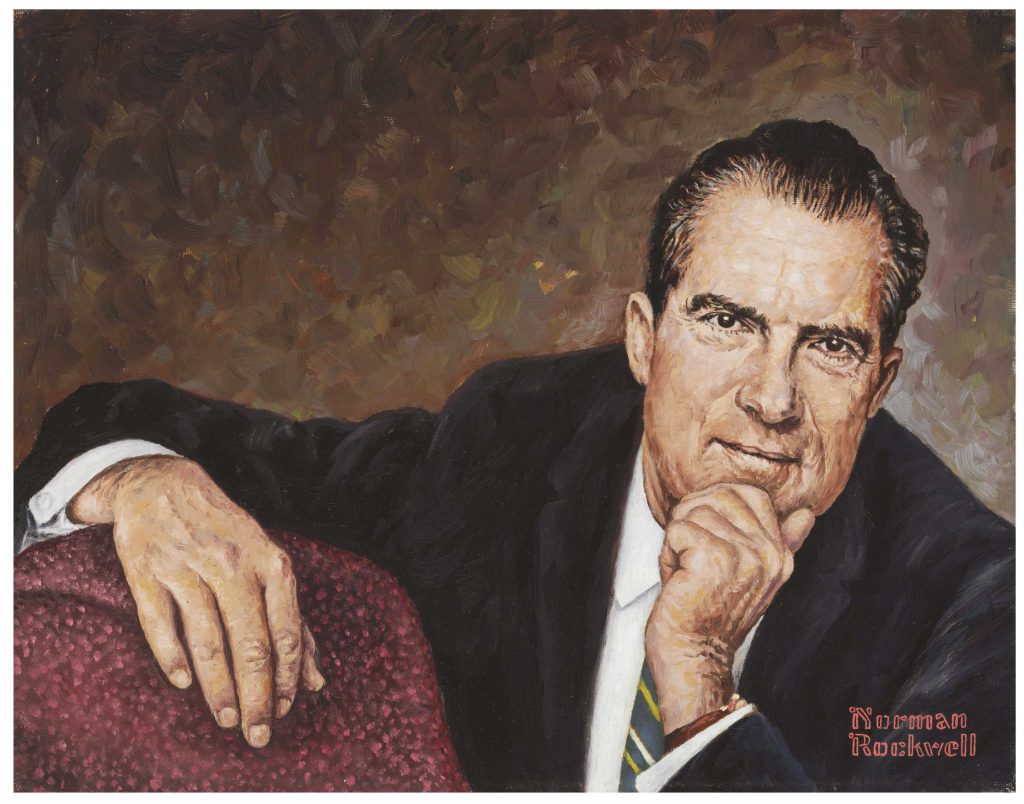 Here is a list of original Norman Rockwell items with actual prices realized that we can get these prices for you at our auction house (Nate D. Sanders):

Norman Rockwell painting “Mr. Apple” (Homage to Rene Magritte), Oil on canvas, 13″ x 17 3/8″ inches, Signed “Norman Rockwell.” Painted June 1970, Stockridge, Massachusetts  Includes letters of provenance: 1.) TLS “Norman,” dated 6/11/1970 on his personal stationery where he writes, in part: “I must tell you that I got the two apples, and I haven’t eaten them, but I have put them in the refrigerator so they will keep bright and shiny…It will be fun doing such a unique painting.” 2.) ALS in full, nd, on his personal stationery where he handwrites, “Dear Mr. Blum – Here it is!  I really enjoyed painting Mr. Apple.  I sure hope you like it. The painting may still be wet when you get it. But do not varnish it for a couple of months.  If you use [sic] a fine mastic varnish it will preserve it forever. Cordially, Norman Rockwell.”  Painting also includes two other letters of provenance describing the reason for Rockwell completing the work (it was done as a label for United Vintners), and tracing its path of ownership in very fine detail from the studio of Rockwell to its current state in our archives.  This Rockwell original has never before been exhibited, and never before been offered to the public. The picture shown here does not do justice to the vibrance and color of the painting. A rare chance to have an original signed Norman Rockwell piece hanging on your wall.  An excellent original Norman Rockwell painting.  Sold for $33,722. 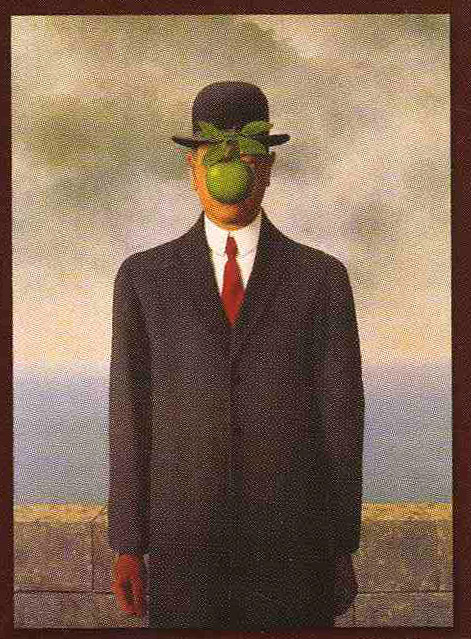 1960 signed Norman Rockwell painting being a portrait of Richard Nixon, done for the cover of the “Saturday Evening Post.” Charcoal on paper drawing measuring 16″ x 20.75″. Signed to lower right with the artist’s initials, “NR.” This portrait was a study for the 5 November 1960 cover of the Saturday Evening Post, which appeared amidst the presidential race one week after Rockwell’s cover portrait of Kennedy. In addition to Nixon and Kennedy, Rockwell was commissioned to paint portraits of Presidents Eisenhower and Johnson, as well as several foreign heads of state. For his many “vivid and affectionate portraits of our country,” the artist was awarded the Presidential Medal of Freedom in 1977, the highest honor given to an American civilian. Nixon portrait is in very good condition, with pinholes scattered along the edges, and remnants of adhesive from scotch tape scattered along the extreme edges. Corners of sheet fit into tissue pockets on backing. This study is all the more exceptional as it is the only remaining item from the Nixon-Rockwell portrait session, beyond the final portrait itself. Kennedy’s portrait, on the other hand, was lithographed in a limited edition of 2,500 and is therefore far more common than this portrait, which poignantly captures the subject’s personality that Rockwell is so famous for. Accompanied by 5 November 1960 copy of Saturday Evening Post featuring portrait on cover. Rare and inexpensive Saturday Evening Post cover Norman Rockwell painting.  Sold for $24,000. 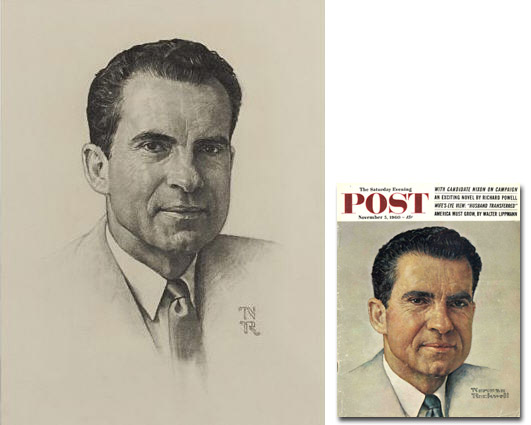 Norman Rockwell painting of the 39th Vice President of the United States, Spiro Agnew. Oil on canvas depicts a profile of Agnew with a beautiful background of rising puffy clouds and solid blue sky. Signed by Rockwell at lower left. Painting was done in 1970 and featured on the cover of TV Guide, dated 16 May 1970. Measures 13″ x 19″. Some abrasion from framing at edges, and line of paint loss along left edge. Near fine condition. Inexpensive Norman Rockwell painting.  Sold for $15,109. 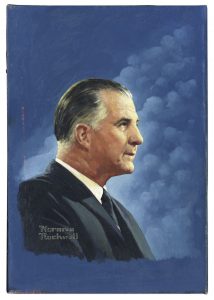 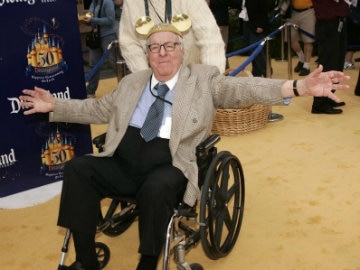 A portion of late science fiction author Ray Bradbury’s estate, including George Bernard Shaw’s garden spade and artworks both comedic and surreal, sold for $493,408 in California, the auctioneer said.

Bradbury, who died in 2012, was perhaps best known for his dystopian classic, “Fahrenheit 451.,” the auctioneer said. In a career spanning more than 70 years, the Waukegan, Illinois, native also wrote “Dandelion Wine,” “I Sing the Body Electric” and “From the Dust Returned” as hundreds of short stories, poems, essays, operas, plays, teleplays and screenplays.

Among Bradbury’s possessions sold late on Thursday was an inscribed spade owned by Irish Playwright George Bernard Shaw and a meandering science-fiction-free unpublished poem about the garden tool, which sold together for $6,250, auctioneer Nate D. Sanders said.

Dean Ellis’ painting of a naked, tattoo-covered man sitting atop a tiny wooden platform under a bewitching crimson sky, used for the 1969 cover of short story collection “The Illustrated Man,” sold for $45,894, the auction house said.

Surrealist painting “Carnival” by Italian-born artist Joseph Mungnaini, a longtime friend of Bradbury’s who developed cover and interior art for his books, won $23,153, the auctioneer said.

FREE APPRAISAL.  To auction, buy, consign or sell an original Norman Rockwell painting, especially a Saturday Evening Post Norman Rockwell painting or large canvases for up to $50,000,000 (50 million dollars), please go to http://www.NateDSanders.com, email your photo and description to Nate at Nate@NateDSanders.com.  1. Interest free cash advances are available, 2. you can name a high reserve. No other auction house will give you those terms, especially the high reserve.