To buy, consign or sell a Nathanael Greene autograph, please email Nate at Nate@NateDSanders.com or phone (310) 440-2982.  Thank you.

We at NateDSanders.com would like to release a statement that we sold two rare and important Revolutionary War legend Nathanael Greene autograph letter signed.  Please see the description and the price below:

General Nathanael Greene Revolutionary War Autograph Letter Signed Regarding Failed British Leadership — “Was there ever a nation who barter’d away her territory in such a foolish maner?”

Nathanael Greene autograph letter signed, “Nath Greene” from West Point as the Quartermaster General during the American Revolutionary War. Washington’s top general writes to General George Weedon in Virgina from West Point in New York on 6 September 1779. He speculates that Great Britain will “…sue for the mediation of America, to bring about a peace. Was there ever a nation who barter’d away her territory in such a foolish maner…Her pride and glory are droping like false blossoms in the spring…America will in the hand of heaven prove a scourge to Great Britain, to punnish her for her injustice, pride and cruelty…” As commander at West Point, he surmises British forces are “…too small to enable General Clinton to drive us over the Allagany Mountains…” A year later, Washington made Greene second in command of the Continental Army. General Weedon resigned from the American military the year before this letter was written but remained active politically and successfully led a militia brigade in Virginia. He also discusses the great importance of Light-Horse Harry Lee’s recent victory at Paulus Hook. Published in “Papers of General Nathanael Greene, IV:364.” Four page letter measures 7″ x 11.75″. Separation to folds and small holes at intersections. Very good condition. Sold for $11,500. 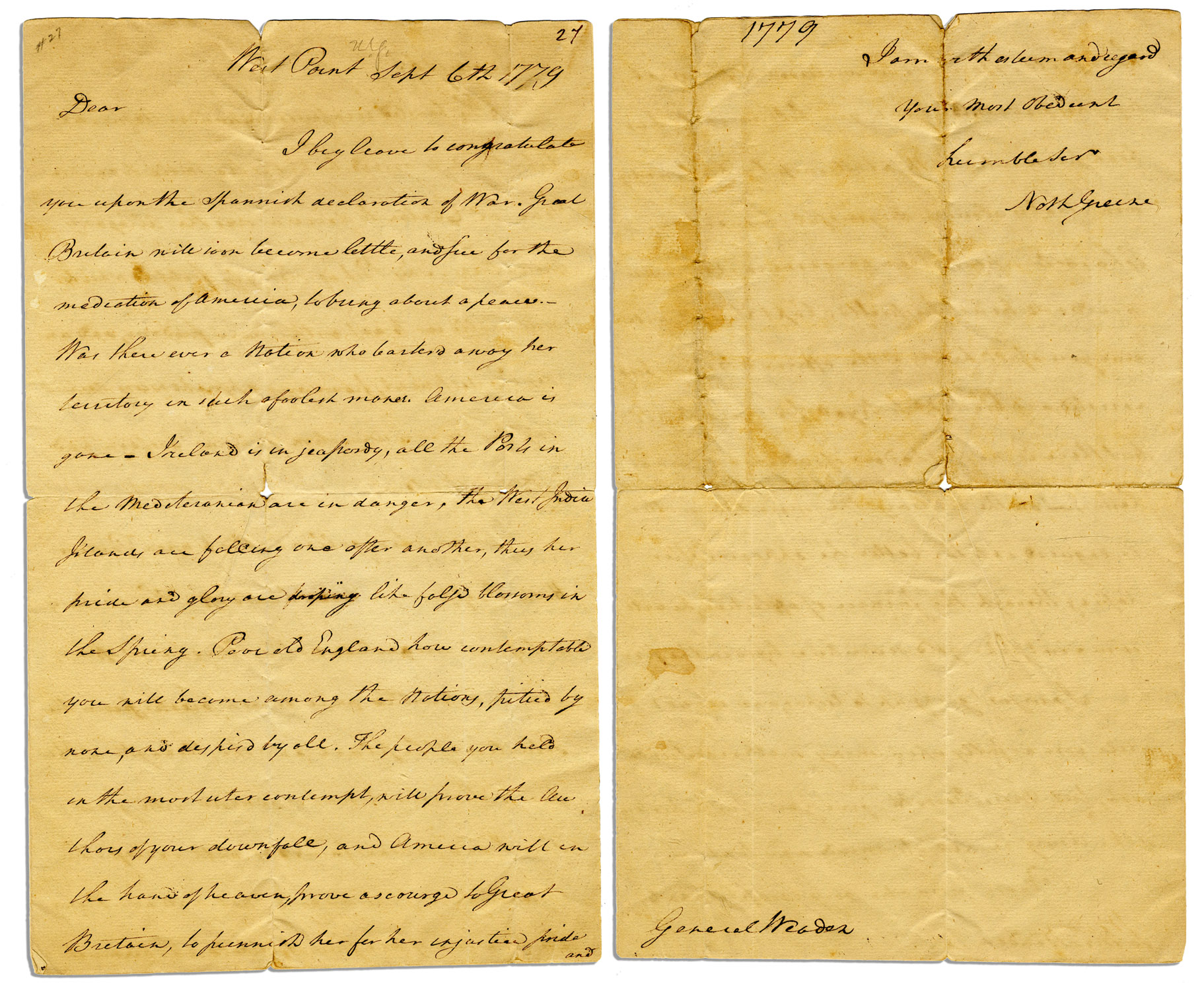 General Nathanael Greene Revolutionary War Autograph Letter Signed Regarding Failed British Leadership — “Was there ever a nation who barter’d away her territory in such a foolish maner?”

Nathanael Greene 1781 Autograph Letter Signed to James Calhoun, the First Mayor of Baltimore — With Excellent Content: “…enjoy your wealth at the expense of [soldiers’] blood…”

Nathanael Greene war-dated autograph letter signed “Nath Greene” with exceptional, first-rate content on the Revolutionary War. Datelined from Headquarters, South Carolina, 14 November 1781, Greene chastises James Calhoun (the first mayor of Baltimore) for engaging in “the pursuit of wealth” rather than fighting in the War. In large part, “Dear Sir, This will be handed to you by Col. Howard, as good an officer as the world affords…He has been wounded but is happily recovered, and now comes home to pay a little attention to his own private affairs, and to the charge of the fifth Maryland Regiment running in your state. I have never had the honor of a line from you since I have been in this department. Having separated yourself from any military connections, you are so eager in the pursuit of wealth as not to write a line of remembrance to your former friends for want of time for I will not suppose is to proceed from a want of friendship. Go on and buy house to house and field to field and pursue [illegible] with all the avidity of a rich man; but don’t forget the poor soldiers because they are the [illegible] part of community. You will enjoy your wealth at the expense of their blood, for what is property without liberty. You have never felt the ravaging hand of war nor the insolence of British tyranny, and god grant you never may. But until then you cannot speak and reason justly. This country has groaned under oppression and cruelties of every kind, and such as would [illegible] even from savages. I congratulate you upon our great good fortune in Virginia. But I think the enemy made a poor defence. This event is no less important to the public than it is glorious to General Washington. Your address to him through Baltimore was excellent, his answer delightful. Nature in her gifts is commonly too sparing to be great and good at the same time, but those qualities are happily combined in him. I beg my swift respectful compliments to Mrs. Calhoun and all my friends and acquaintances in Baltimore…Nath Greene”. Letter runs 3pp. on two sheets of card-style stationery measuring 12.5″ x 7.25″. Reinforced with a tissue lining and small areas of paper loss, else near fine.  Sold previously for $6875 at Doyle Auctions in 2014. Sold for $11,550. 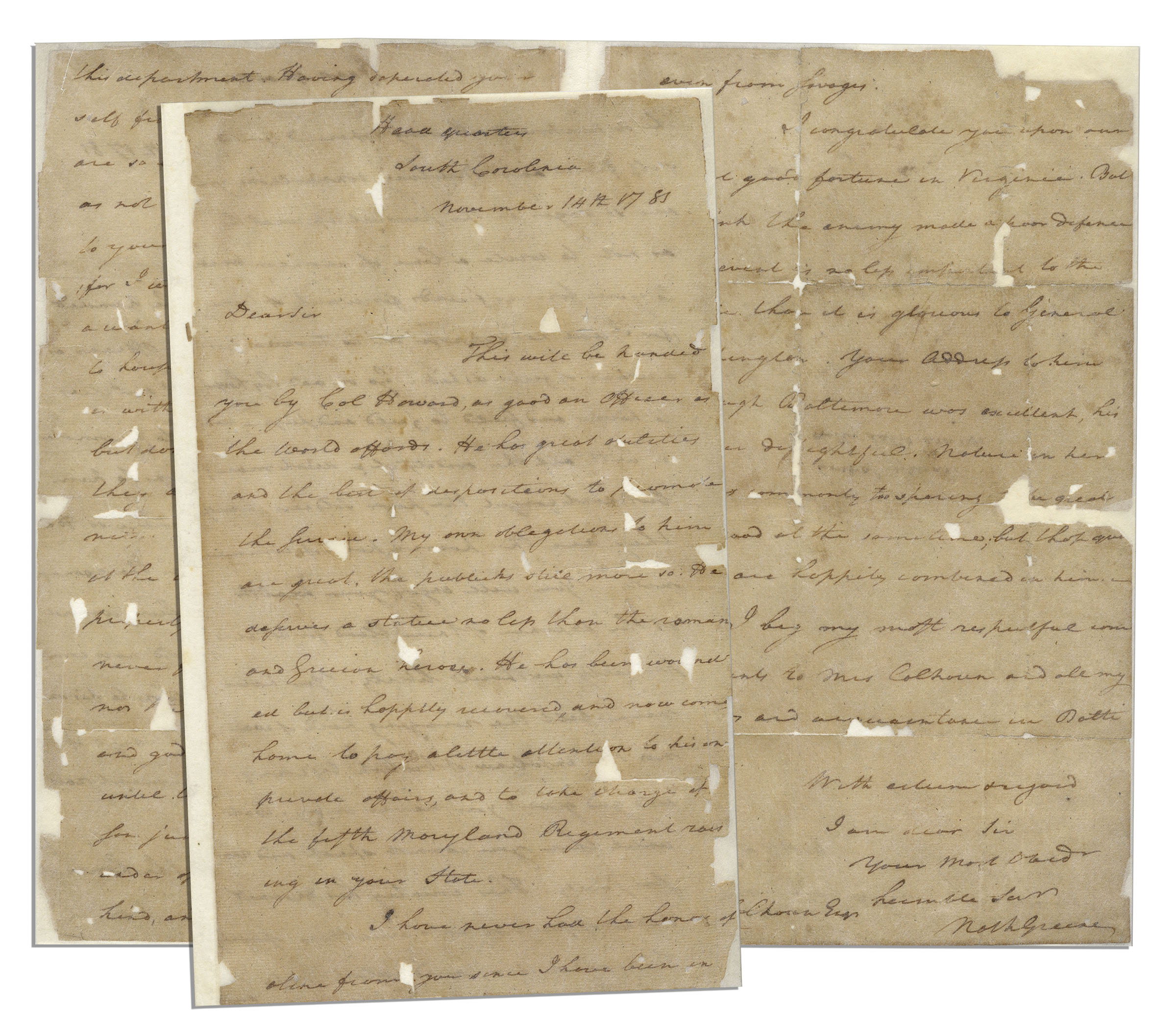 Nathanael Greene 1781 Autograph Letter Signed to James Calhoun, the First Mayor of Baltimore — With Excellent Content: “…enjoy your wealth at the expense of [soldiers’] blood…”

To buy, consign or sell a Nathanael Greene autograph, please email Nate at Nate@NateDSanders.com or phone (310) 440-2982.  Thank you.