Fantastic Albert Einstein typed letter signed ”A. Einstein” upon his personal stationery, dated 10 June 1939 from Princeton, New Jersey. While WWII raged in Europe, Einstein writes to a Dr. Epstein, thanking him for the work done on behalf of Jewish refugees. Reads in full: ”My dear doctor Epstein: May I offer my sincere congratulations to you on the splendid work you have undertaken on behalf of the refugees during Dedication Week. The power of resistance which has enabled the Jewish people to survive for thousands of years has been based to a large extent on traditions of mutual helpfulness. In these years of affliction our readiness to help one another is being put to an especially severe test. May we stand this test as well as did our fathers before us. We have no other means of self-defense than our solidarity and our knowledge that the cause for which we are suffering is a momentous and sacred cause. It must be a source of deep gratification to you to be making so important a contribution toward rescuing our persecuted fellow-Jews from their calamitous peril and leading them toward a better future.” Letter on 1pp. measures 8.5” x 11” with expected folds and three small .5” closed tears to left margin, overall very good. Also includes a 1937 typed letter signed from Fiorello LaGuardia to Epstein, discussing his help in unification between the Brooklyn and New York Federations of the Jewish Appeal.  Albert Einstein Judaica memorabilia is highly sought after.  Sold for $13,045. 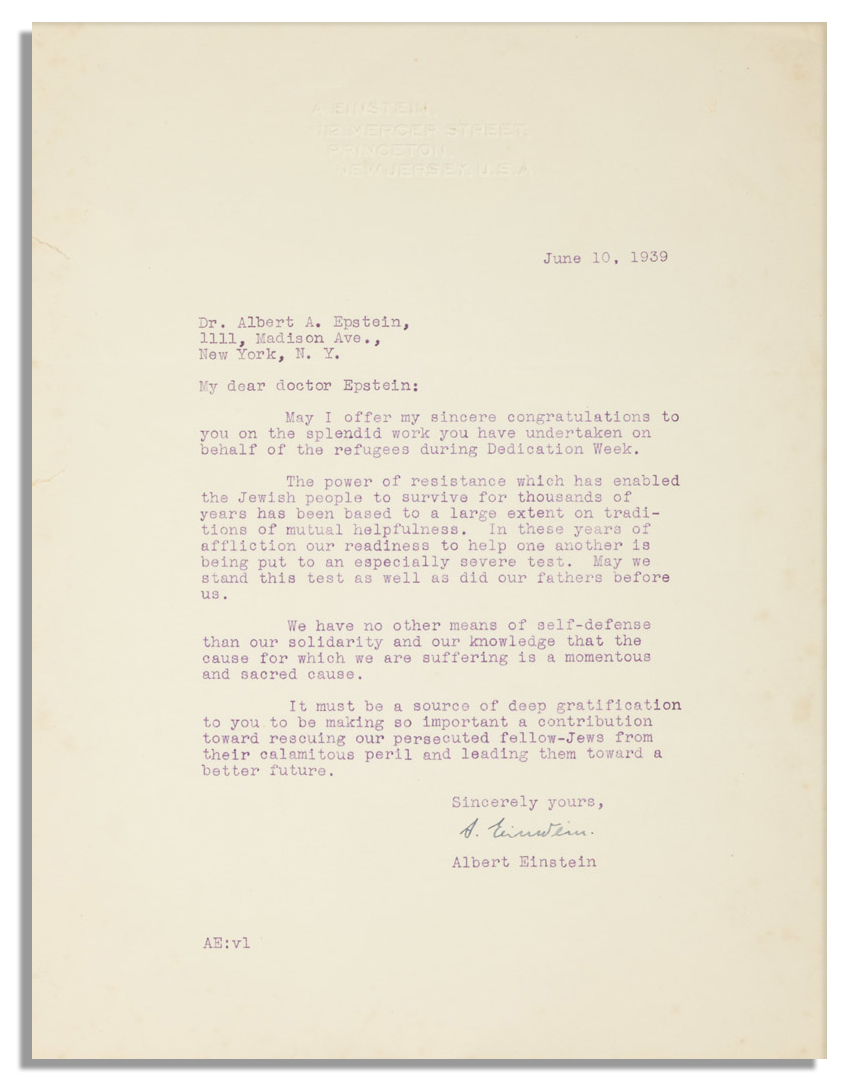 Fantastic Golda Meir typed letter signed as Minister of Labor. Dated 24 April 1955, letter in Hebrew is addressed to Prime Minister Moshe Sharett, on Labor Minister stationery, and is accompanied by an English version (signed in type only) addressed to Defense Minster David Ben Gurion. Meir’s letter reads in full: ”To my great sorrow, I must say that signing the truce/cease-fire agreements with Egypt, Lebanon, Jordan & Syria – do not mean that these Arab – Countries accept our very existence. On the contrary, as a matter of fact their interpretation is that their defeat in the battle-field encourage them – headed by the Egyptian tyrant – to send ‘Feda’iyun’ to destroy our settlements & to cause panic among our citizens. That is how they wish to destroy the Jewish State, Therefore, our own military action against them – mainly in Gaza – are so moral & so just. Yours Sincerely, Golda Myerson / Minster of Labour”. Single-page signed letter measures 6.25” x 8.75”. Toning, pencil notation to upper left, red pencil notation to lower right and two punch holes, else near fine. The copy to Ben Gurion measures approximately 7.25” x 6” and save for creasing is in near fine condition. One of the most expensive Golda Meir Judaica memorabilia items. Sold for $8,908. 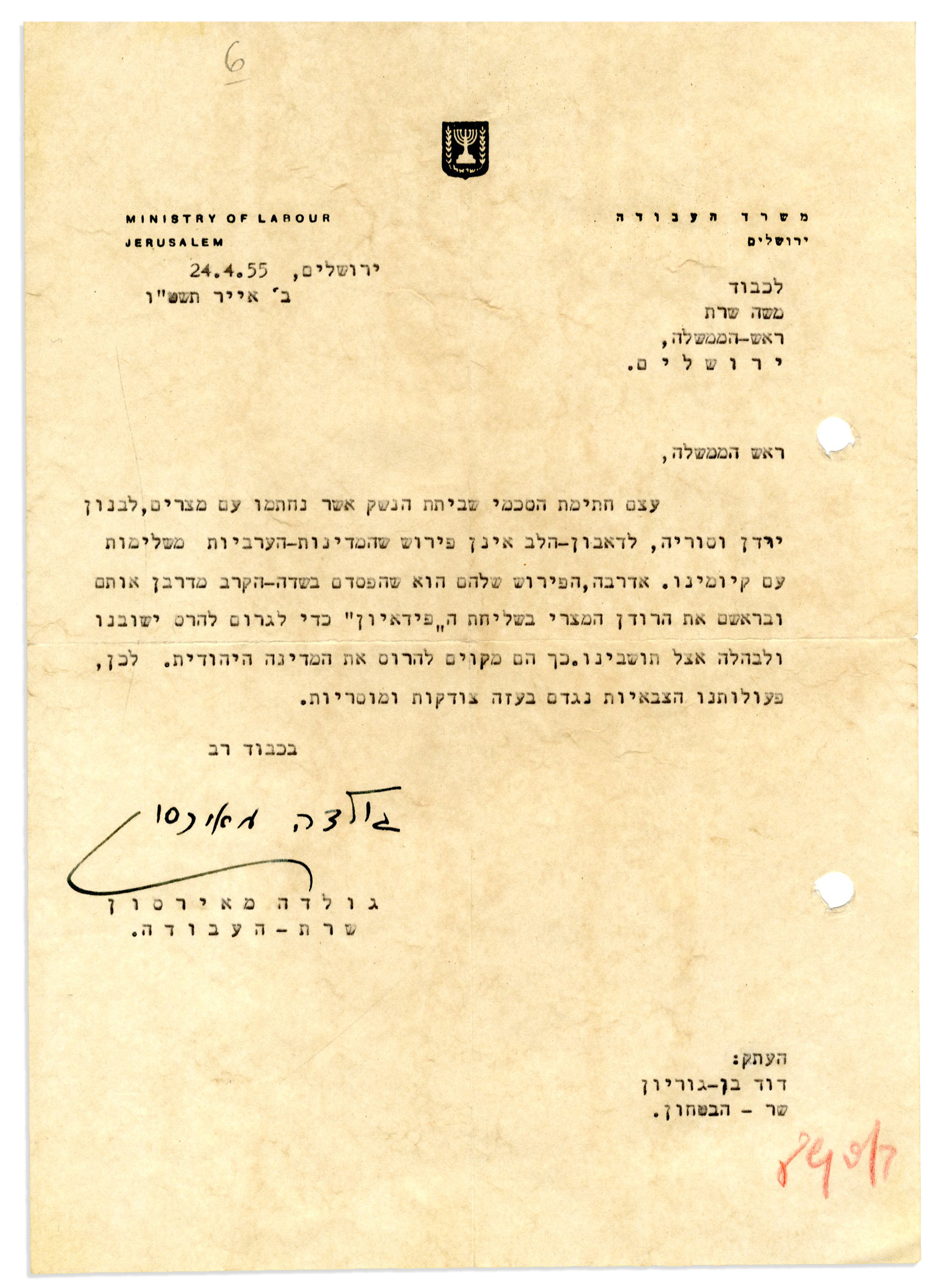 Golda Meir Autograph Note Signed Upon a Postcard to Palestine

Golda Meir autograph note signed upon a postcard, sent by Meir to someone in Palestine. Her note, in Hebrew, appears on the back of a postcard from Cairo, Egypt. The postmark is from Alexandria (date uncertain). Measures 6” x 2.75”. Toning with a punched hole below the stamp, else near fine. An impressive price for this piece of Judaica memorabilia. Sold for $4,654. 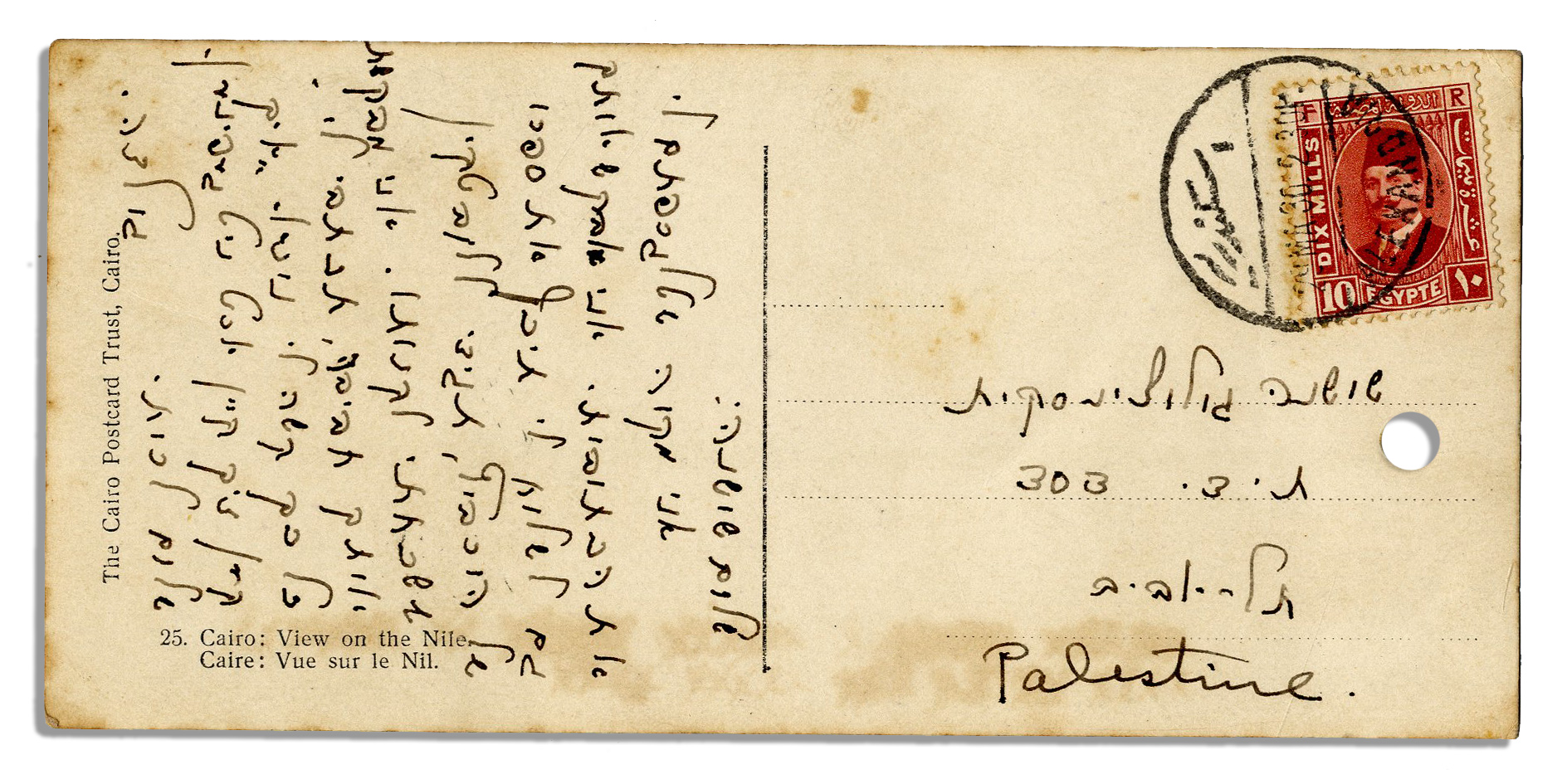 Golda Meir Autograph Note Signed Upon a Postcard to Palestine

Limited edition color lithograph of David Ben-Gurion from 1973, the last year of his life. Signed, ”D Ben Gurion” at the lower edge of the portrait, in which Israel’s first prime minister stands in partial profile before the Israeli flag. Also signed by the artist Herbert Davidson at the lower right corner. Numbered ”372/500”. Lithograph measures 20” x 16”, matted and framed to an overall size of 27.5” x 23.75”. Litho has not been removed from the frame for examination but appears near fine. Frame is near fine save for some scratching to plexiglass.  Sold for $688. 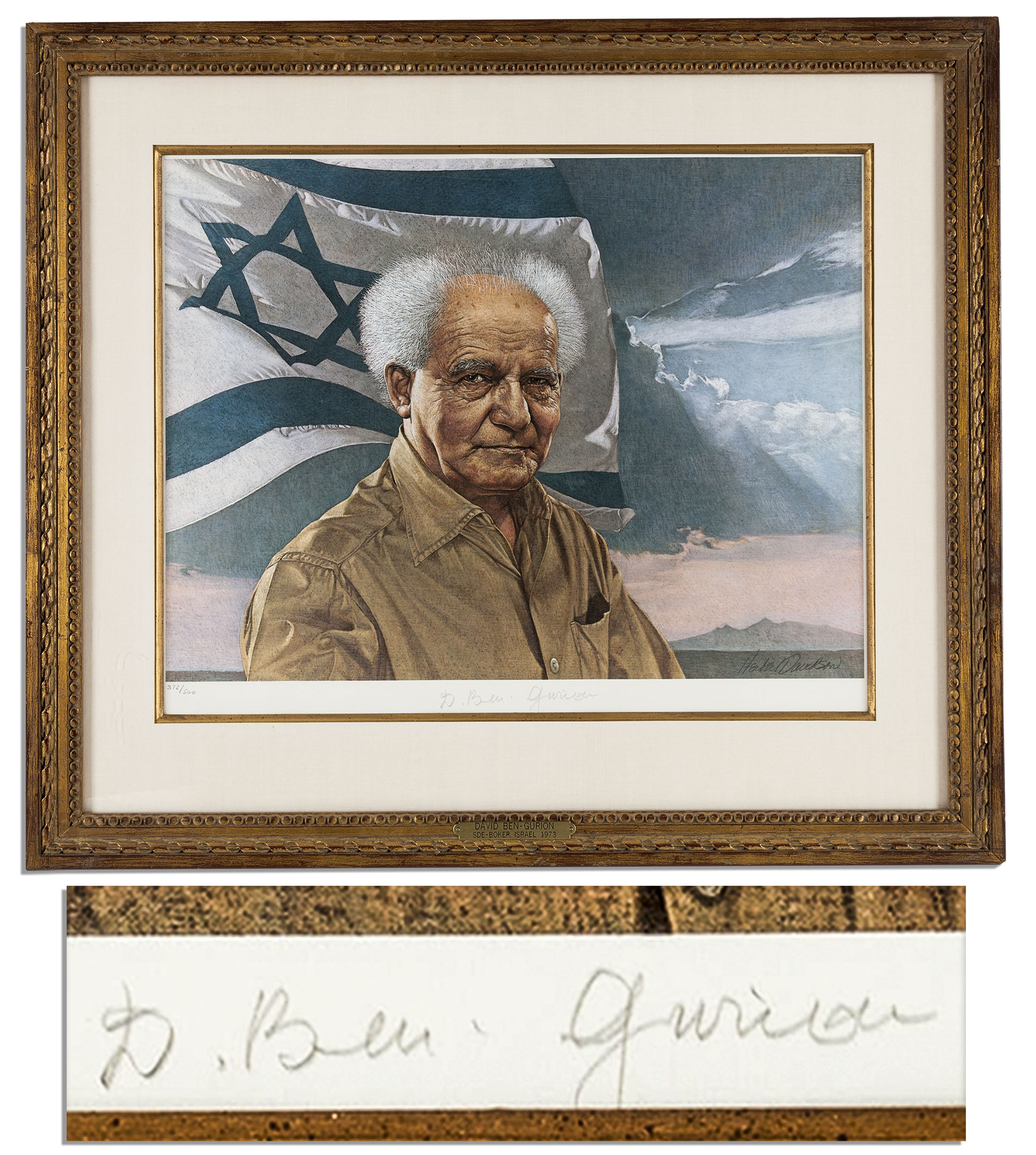 Moshe Dayan Archive of Signed Letters & Documents Related to the Famous Loss of His Eye — Israeli War Hero Asks to be Restored to Active Duty “…although I have lost one of my eyes…” — One of the Best Pieces of Judaica Memorabilia of All-Time.

Israeli war hero and military leader Moshe Dayan archive of letters and documents related to the loss of his left eye, including Dayan’s personally owned typed account of the incident and the original hospital bill for surgery related to the famous incident. Lot also includes an autograph letter signed by Dayan and an Army assignment letter to Dayan. On 7 June 1941 Dayan lost his left eye when he was hit by a sniper’s bullet while fighting Vichy France troops in Syria for the Australian 7th Division of the British army, and entered a period of long recovery in which he adopted his signature eye patch, which became a fighting symbol of the state of Israel. Dayan rose to political prominence after the incident, leading the country to victories in numerous combat operations including the Six-Day War in 1967 and the Yom Kippur War in 1973. Lot includes: (1) Autograph letter signed by Dayan, written to Lieutenant General Sir Henry Maitland Wilson of the British Army, in which Dayan pleads to be restored to active duty in 1941, reading in full; “To the General Officer Commanding His Majesties Forces in Palestine / I wish to beg of you to help me to be received to the Cadre Squad of the Palestinian Forces in Sarafend although I have lost one of my eyes while on active service with our British Forces on the invasion of Syria (a full report is herein enclosed). Now that I have almost finished my medical treatment, I feel I am quite fit again to serve in the Army and I ask therefor to be considered as if I were wounded while being a registered soldier and to give me the opportunity to carry on til the end. I believe I shall be able, after the required training to get a commission. During the disturbances in Palestine (1936-1940) I served as a guide to the British troops. Passed a military course for N.C.O.’s and became a Sgt. in the J.S.P. I do not wish to ask any special favours except that I shall be allowed to pass the medical examination. The rest I shall try and fulfill to my abilities. I shall be very grateful if you consider my case and give me your decision.” Dayan signs “Yours faithfully – Moshe Dayan” and initials a postscript reading, “P.S. The enclosed report [included in this archive] I sent to Jewish Agency to be forwarded to the right authorities, as I was called up by them for that special service. M.D.” (2) Included is Dayan’s report of the incident which led to the loss of his eye, typed in Hebrew and with edited Hebrew and English additions written in ink by Dayan. Translated report reads, “On June 1, I was called by my immediate superior and it was proposed that I join the unit slated to operate on behalf of and together with the British Army. My immediate superior told me that I was to serve as an Officer of the unit, and to be responsible for the activities of thirty men who were to operate in the area of Bint-Jneil – Iskandaroun. I was told that whatever uniforms we would be wearing, we would be considered (Members of the British Forces) and we would undertake the same duties and rights as members of British Forces. After receiving the explanation of the value and nature of the assignment, I accepted it willingly. I was given a weapon and the necessary documentation for my men and from June 1 to June 7, my men and I patrolled the area allocated to me, in accordance with the orders given to me by my superiors…On Saturday, June 7, 1941, my immediate superior introduced me to Clyfen, Allan of the A.I.F. [Australian Imperial Forces] and told me I was to take a detachment of my men with them and carry out the following.” Here Dayan lists seven assignments including cutting specific telephone lines and dispatching guides to lead British Army units. Dayan describes his actions in detail, continuing, “…At 0100 hrs., we reached the bridge…According to available information, the bridge was guarded by sentries and was set to explode…We rested near this bridge and at 0400 hrs., we decided to move to Iskandaroun to help the British forces, who were to come from Ras al-Naqura, with its capture…Upon approaching village…we observed the movement of French troops…The Australian Officers and their men opened fire over the stone wall…and I, together with two of my men, jumped over to the balcony…located about 11z2 meters above ground level…I threw a bomb into the building through one of the open doors. After it exploded, we stormed the building…” Lot also includes (3) a typed letter signed by an unidentified British armed forces officer on 29 October 1941, addressed to Dayan and accepting him as a student in an officer’s cadre course in Jerusalem. Measures 6.75″ x 8.5″. Corner removal to upper right as well as toning, soiling and paper loss to left edge. Very good; (4) Hospital bill for follow-up surgery on Dayan’s eye, dated 28 January 1947 from the surgery department of a hospital in Paris, France. Bill is for the amount of 12.389 francs, with a 5 franc note affixed to bottom, rubber stamped with the hospital’s name. Measures 6.75″ x 10″. Light creasing and toning, else near fine. Typed letter signed by Dayan runs 2pp. on one sheet and measures 6.75″ x 9″. Report of the incident runs 3pp. and measures 8.5″ x 11″, with folds and foxing and staining to verso. The best item of 20th century Judaica memorabilia in existence.  Letter contains light staining and creasing to upper left. Very good condition overall.  One of the best pieces of Judaica memorabilia of all-time. 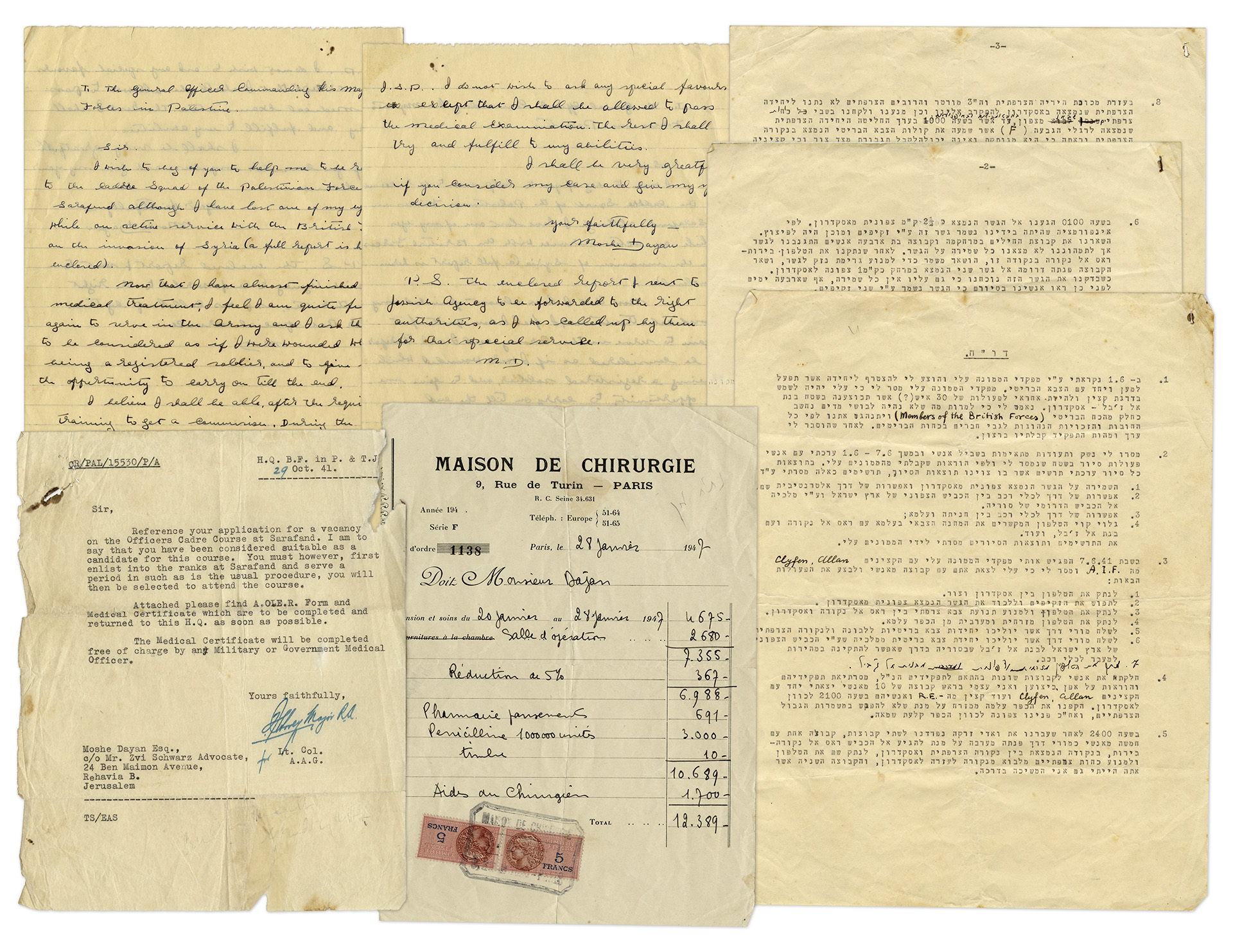