A Joseph Stalin Autograph Can Be Worth as Much as $10,000

Joseph Stalin autograph on a World War II-dated document. Written in Cyrilic, ”Diploma of the Laureate of the Stalin Prize” is datelined from Moscow, and was awarded to the men who helped create emergency leather substitutes. Additionally signed by Y Chadaev, Council of the People’s Commissars, Administrator of Affairs. Reads in part: ”…by the decision of the Council of People’s Commissars of the Union at the S.S.R…the Stalin Prize second class is awarded to (Pisarenko, Alekseenko, Gavrikov, Rogov, Plotnikov, Khomutov, Marakhovskiy)…” Nicely bound document with embossed U.S.S.R. seal. Contained within a gilt hardcover folder with metallic profile busts of Stalin and Lenin. Document measures 10.25” x 14.25” and runs 8pp. Light toning to first blank page and minor foxing throughout, otherwise in very good condition.  Dark Joseph Stalin autograph.  Sold for $9,625. 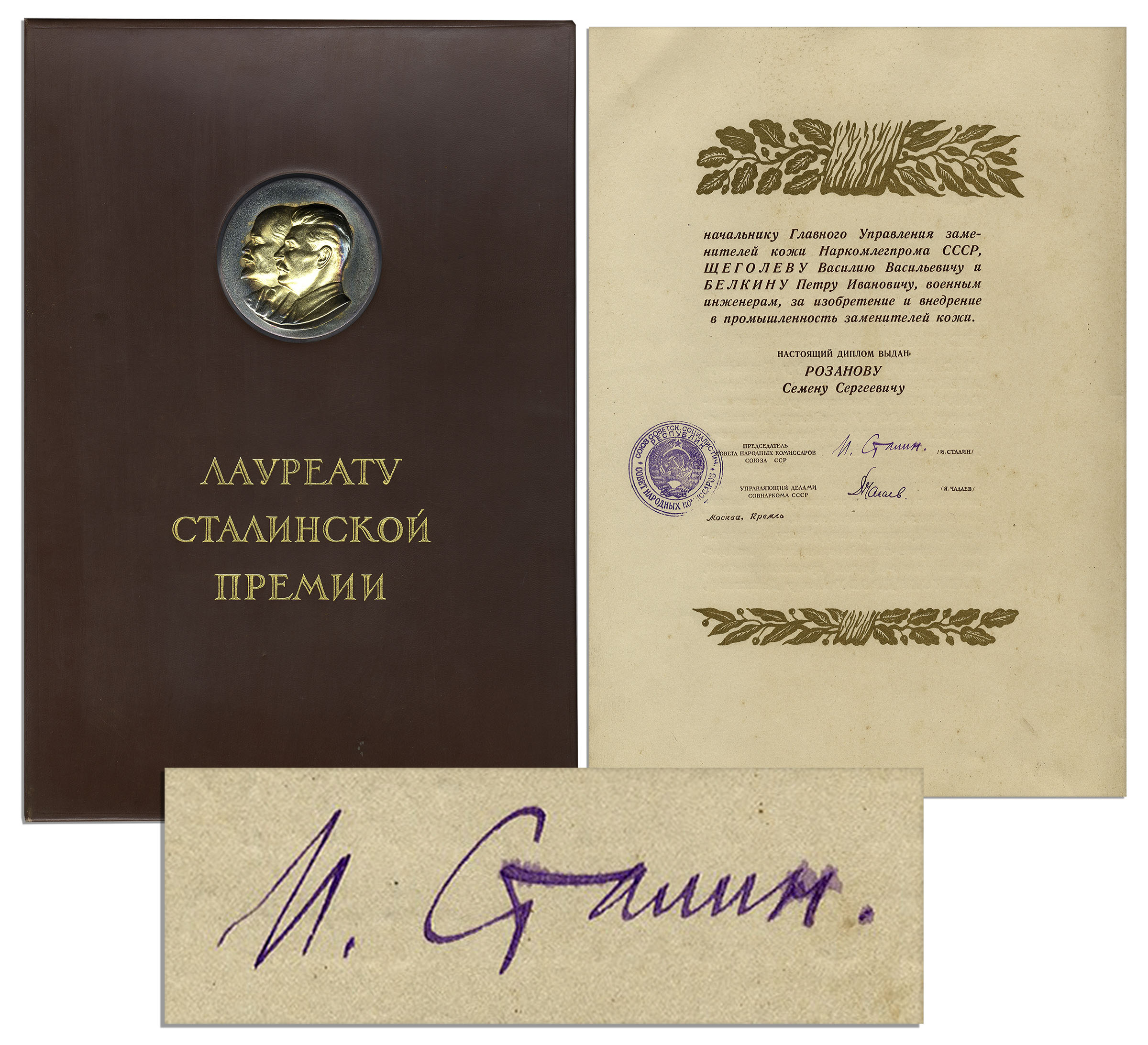 Stalin’s Sweet Letter to His 9 Year-Old Daughter Around the Time of His Violent Great Purge Policy — ”…I got your letter. Thank you for not forgetting about your Daddy…” — 1935

Joseph Stalin autograph letter signed as leader of the Soviet Union to his young daughter. Just before the Great Terror and his violent Great Purge policy, he writes to his nine year-old, Svetlana Alliluyeva. Dated 8 September 1935, in red grease pencil, it translates in part to: ”…I got your letter. Thank you for not forgetting about your Daddy. How are your secretaries doing? Please, find some time to write me about them. I’m doing fine, just missing you. I kiss you very much…Stalin”. After her mother’s apparent suicide and two marriages, Svetlana defected to the United States in 1967. Rare Joseph Stalin autograph. Single page letter measures 5.25” x 7.75”. Creasing, else near fine.  Sold for $4,153. 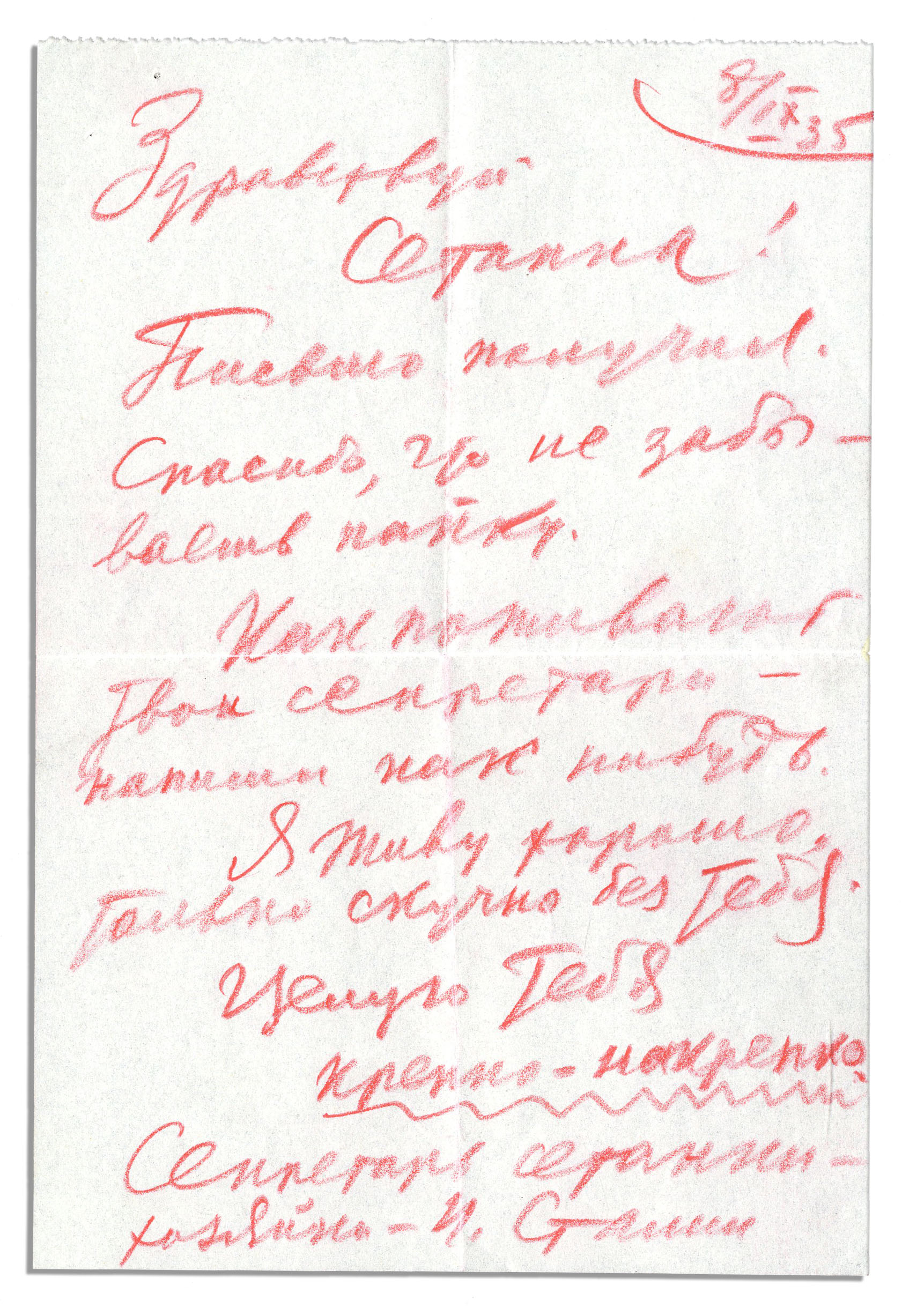 Stalin’s Sweet Letter to His 9 Year-Old Daughter Around the Time of His Violent Great Purge Policy — ”…I got your letter. Thank you for not forgetting about your Daddy…” — 1935

Extremely rare WWII-dated military order signed by Soviet dictator Joseph Stalin, as Stalin struggled to disrupt the Nazi advance into the country and protect Moscow. Entitled, “Order of the People’s Commissar of Defense of the USSR, document is dated 22 September 1941 and orders the restructuring of rail lines along the Trans-Siberian Railway. The order translates from Russian, “The transport fleet of the special corps of the armed railway forces is to be fazed out from the inventory of the special corps by the 30th of September and to be transformed into the Central Railroad Park No. 3 with the relocation of the base to the city of Ulan-Ude. Staff No 13/614 is hereby abolished. / PEOPLE’S COMMISAR OF DEFENSE OF THE USSR / [signed] J. Stalin / [signed] Agree / L. Kaganovich.” Signed in green grease pencil by Stalin. The document’s verso lists only 18 people who were to receive the order. Double-sided 8.5″ x 11.5″ sheet has very light toning and a small chip to lower left side. Near fine condition.  Bold Joseph Stalin autograph. Sold for $4,078. 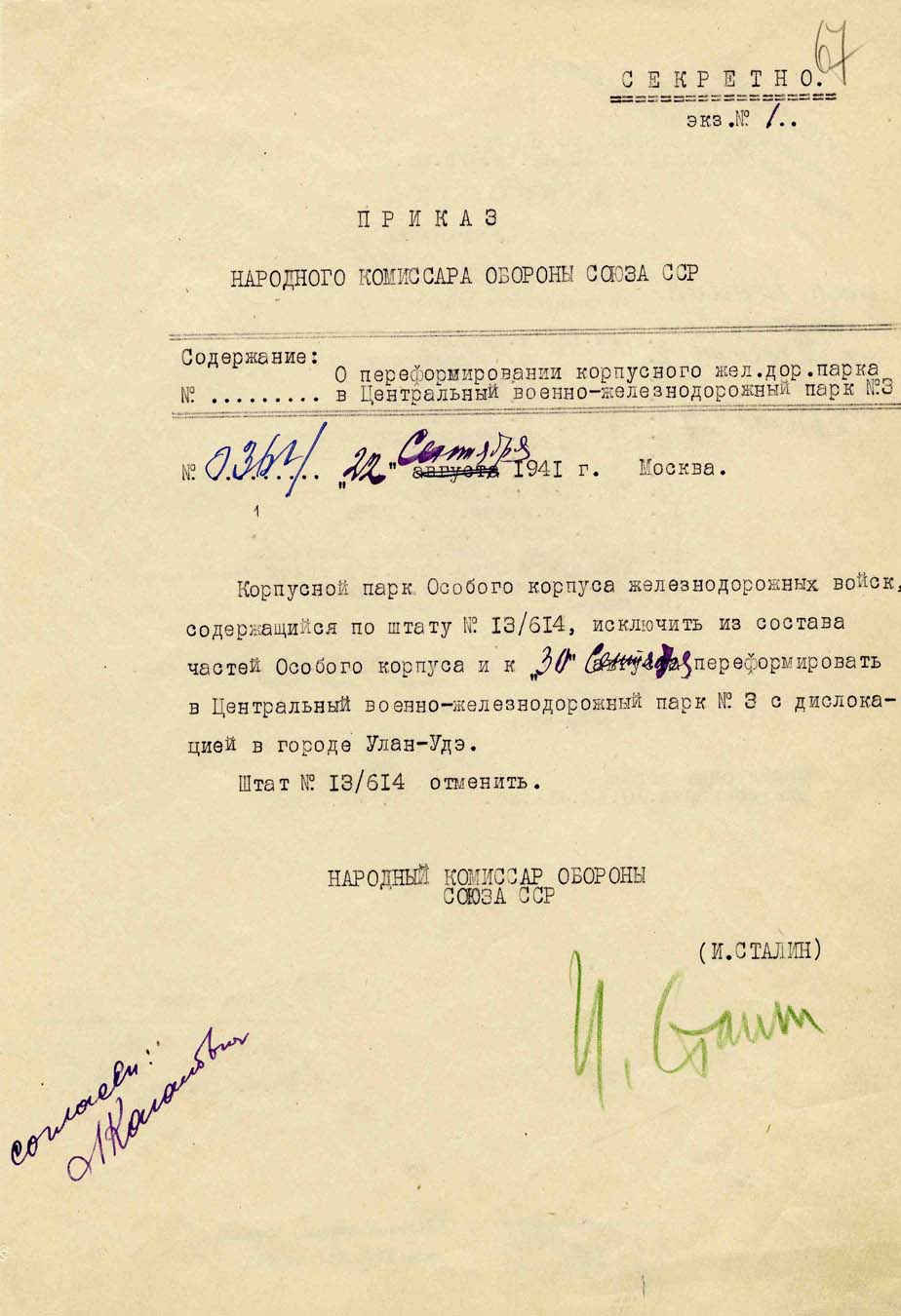