The Most Expensive Joan Crawford Memorabilia Has Been Sold at NateDSanders.com

Oscar statue awarded to Joan Crawford for Outstanding Performance by an Actress in a Leading Role as the title character in the 1945 film “Mildred Pierce”. Joan Crawford currently ranks in the American Film Institute’s top ten actresses in the history of cinema. After rocketing to stardom in MGM’s pictures “Sally, Irene and Mary,” “Our Dancing Daughters” and “Untamed,” Crawford became one of the biggest movie stars of the day, the flapper ideal for the modern woman. Her reign as so-called “Queen of the Movies” spanned the entire Great Depression era. She left MGM for Warner Brothers in 1943 and then, despite rumors that her career was over, convinced director Michael Curtiz, who had just won the Oscar for “Casablanca,” to cast her in the lead role as “Mildred Pierce.” The murder mystery film was adapted to the screen from the James M. Cain novel of the same name and produced by Jerry Wald and Jack Warner. Crawford’s character is the subject and driving force of the noir film, a divorced woman enslaved by her need to gain the approval of her spoiled, elitist teenage daughter, Veda. Ann Blyth plays Veda, and herself was Oscar-nominated for her supporting role. Joan Crawford’s role as Mildred Pierce was regarded as her triumphant comeback, and indeed, the winning of this Oscar ultimately proved to be the true pinnacle of her extraordinary Hollywood career; it is considered one of the Best Actress performances of all time. The plaque affixed to the front of the base is engraved: “Academy First Award / To / Joan Crawford / For Her Performance In / ‘Mildred Pierce'”. Gold-plated statue of “Oscar” standing on a film reel measures 10.25″ in height atop a round black base to an overall height of 13.25″. Base measures 5.5″ in diameter. Statue weighs 6 lbs. 2 oz. Light speckling and rubbing to finish and scattered chips to base, else near fine. The most expensive Joan Crawford memorabilia of all-time.  Sold for $426,732. 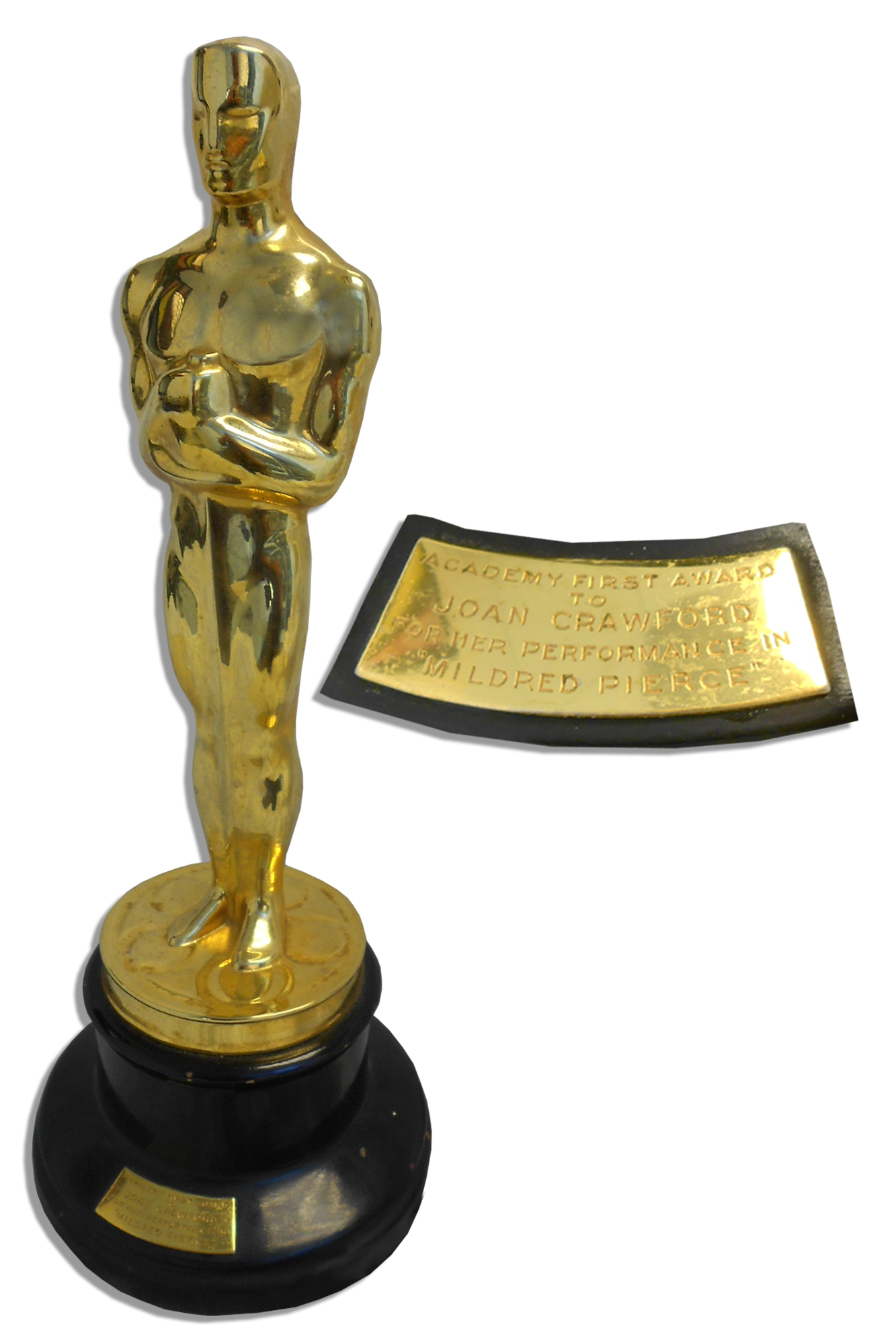 Joan Crawford’s hero dress from her magnum opus, “Mildred Pierce”. Joan Crawford currently ranks in the American Film Institute’s top ten actresses in the history of cinema. Polka-dot dress is worn by Crawford in the film’s promotional posters, in a still captured from the scene in the beginning of the film when she goes on a date, set at the Malibu beach house of her scheming beau Monte Beragon. Rayon dress, originally white, has since been dyed to a flesh tone color, with polka dots in a darker nude shade. Design features a slightly A-line cut shirt, long sleeves, pleated bodice and square neckline flanked by a simple bow on either side. A Warner Bros. Pictures label is sewn into the placket and has a hand note, “B – 2nd Dress / 18905-638”. Written inside the top in black felt tip is the note, “TBS / 209”. Dress fastens up the back and at the waistline with alternating snaps and hook-and-eye closures, also found at the cuffs. Discreet side zipper is placed over the hip. Likely altered for use in a later Warner Brothers film, dress measures 17.75″ from underarm to underarm, with 21″ sleeve and a petite 11″ across the waist. Original self-belt is absent; dress is accompanied by later grosgrain belt in brown with a cream stripe through the center. Scattered pinholes and stray threads, else near fine. A stunning piece worn by Crawford in her triumphant comeback role, where she delivered what is considered one of the Best Actress performances of all time. Provenance from Warner Brothers.  Stellar Joan Crawford memorabilia.  Sold for $27,500. 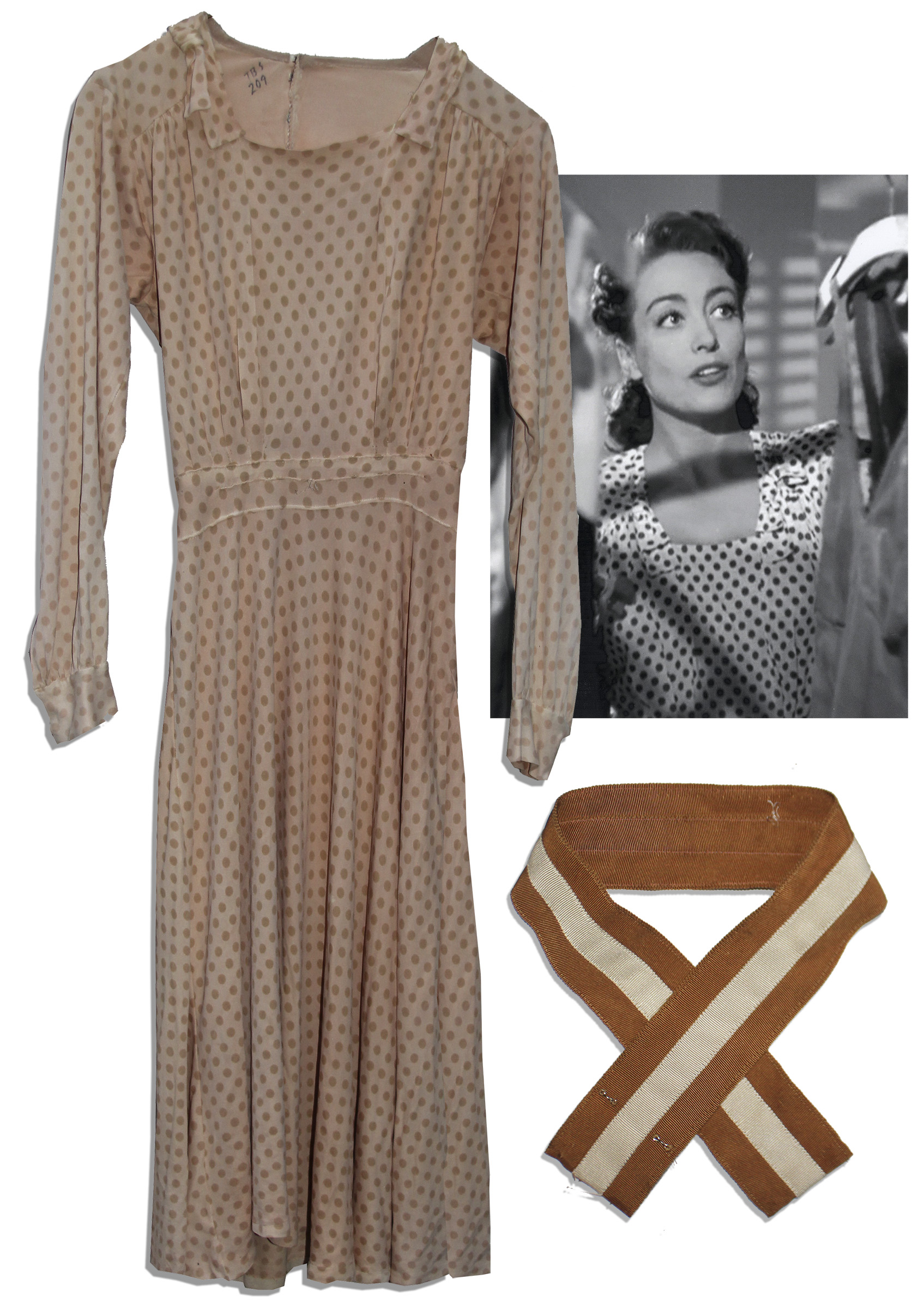 James Montgomery Flagg charcoal portrait of actress Joan Crawford. The foremost illustrator of the early 20th century is best known for his iconic ”Uncle Sam Wants YOU” recruitment poster from WWI, but his vast body of work runs the gamut from the political to the cinematic. Flagg’s renditions of Hollywood royalty were commissioned for ”Photoplay” covers from 1936-1938. ”Photoplay,” published by McFadden, was the most prominent film magazine of its time among fans and industry alike, and sponsored the first awards ceremonies for cinematic achievements. With just two colors added to Crawford’s portrait, red on her lips and blue on her eyes, this piece is characteristic of Flagg’s Photoplay line. Crawford joins Bette Davis, Gloria Swanson, Norma Shearer, Shirley Temple, Claudette Colbert, Carole Lombard and Jean Harlow as Photoplay cover girls, all styled by Flagg in this manner. Crawford began her career as a dancer and cultivated an alluring image with a flapper persona. She successfully made the perilous transition from silent films to talkies and was dubbed ”Queen of the Movies” in 1937. Her name is handwritten and ”James Montgomery Flagg” signs to the lower right. Measures 13.75” x 17.25”. Toning and a minor tear to the right edge, else near fine.  Unique Joan Crawford memorabilia.  Sold for $3,781. 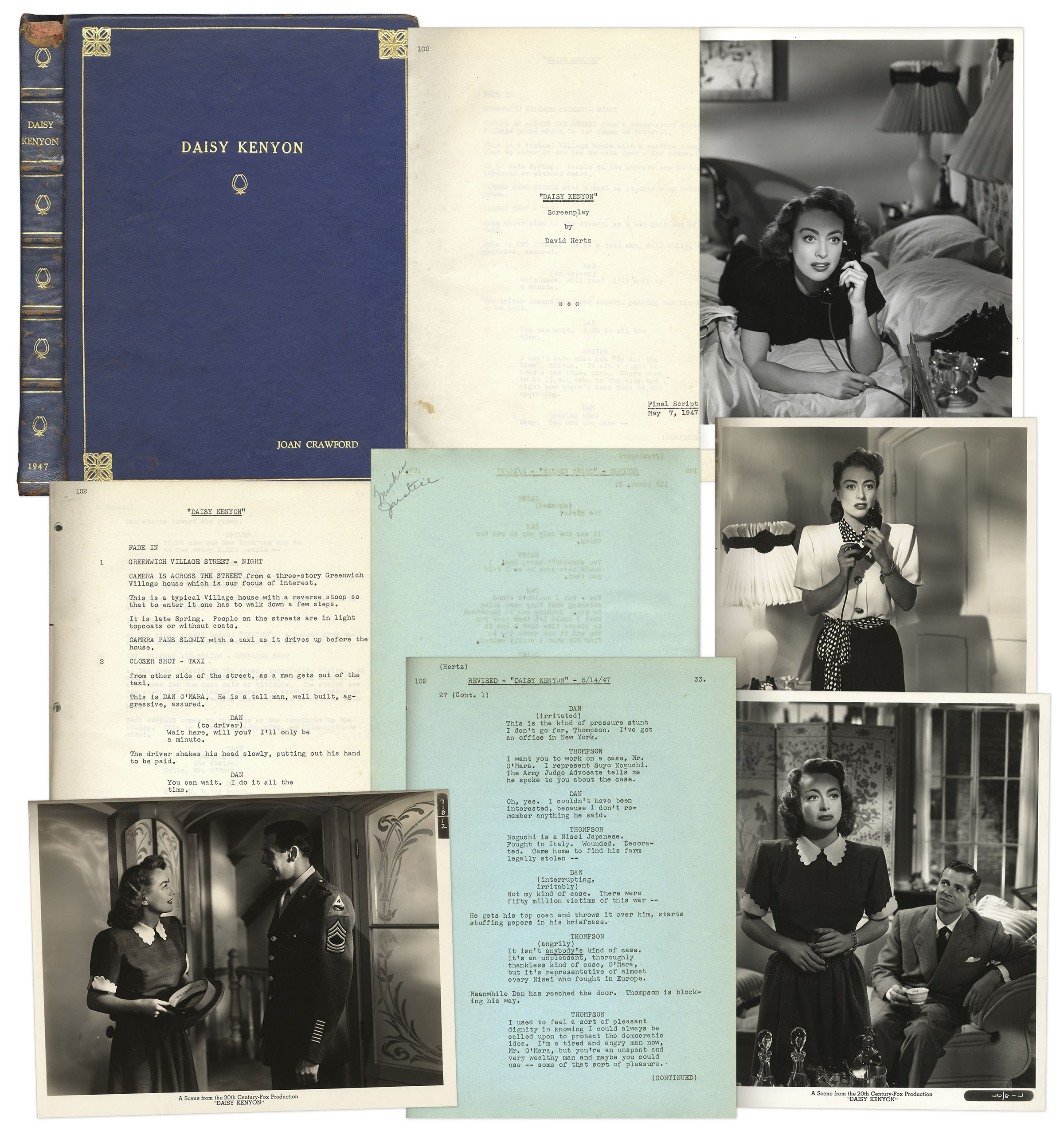