FREE APPRAISAL. If you are looking to buy, auction or sell a George Custer autograph, please email Nate@NateDSanders.com or phone (310) 440-2982.

Very rare autograph letter signed by George Armstrong Custer as Lt. Colonel of the 7th Cavalry, regarding the effect of uniforms on troop morale and discipline. From Fort Leavenworth, Kansas on 24 January 1870, Custer writes to Lieutenant Moylan, in full, ”I would respectfully state for the information of the Brevet Major General Comdg the regiment that some of the company officers appear on parade wearing ‘government pants!’ As all officers are expected to appear on parade in full uniform and as the dress hat and epaulettes are not in keeping with the pants intended for the enlisted men (when worn by an officer) I would recommend that uniformity in dress be required in officers appearing at dress parades or inspections. I have seen fit to call the attention of the regimental commander to the above fact believing it had not come under his notice heretofore. And would respectfully ask to be informed whether it is expected by him that I will, in future, report or take other action on any similar irregularities which may come under my observation when upon duty. / Yours &c. / GA Custer / Lt Col 7th Cav / Br Maj Gnl / USA”. Sold for 8,125. 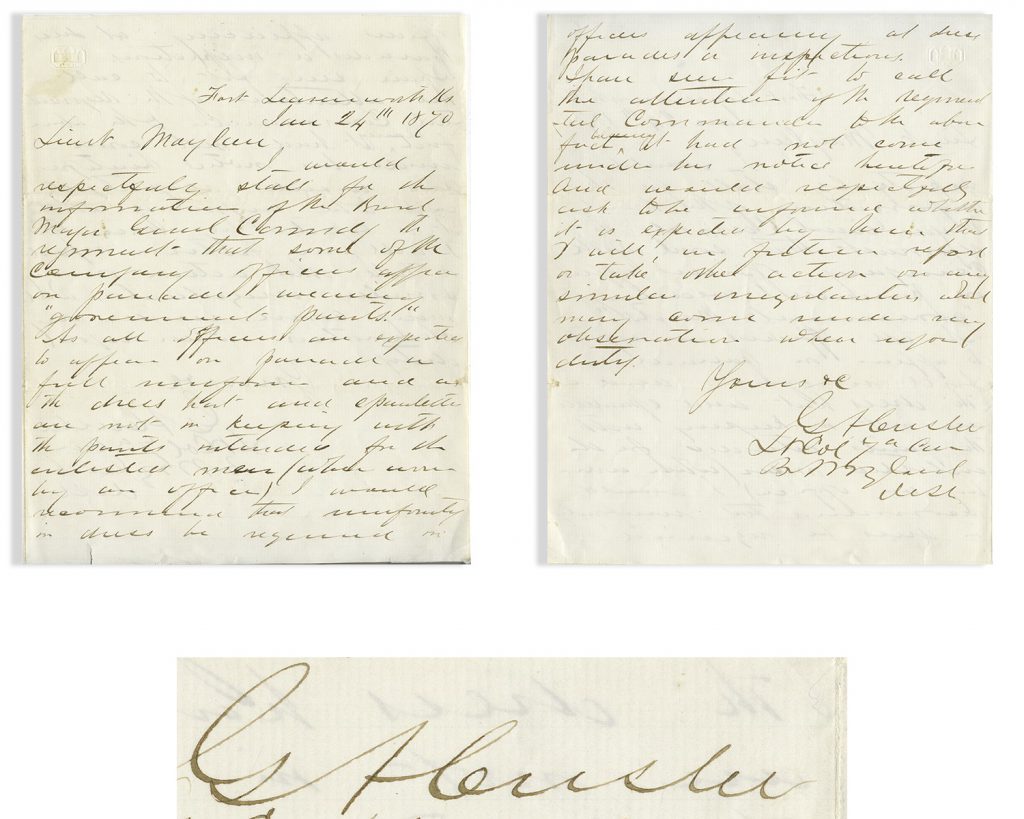 Very rare General George Custer carte de visite signed, circa 1866 during the Indian Wars west of the Mississippi, as photo depicts Custer posing seated in his uniform with his two star Major General insignias on his shoulders. CDV is signed clearly “G A Custer B Major Gen” on verso with a “[Mathew] Brady’s National Photographic Portrait Galleries Broadway & Tenth Street New York No. 352 Pennsylvania Av. Washington D.C.” backstamping. Also includes “Brady / Washington” printed along bottom of photo. Photo measures 2.5″ x 4″ and has been archivally repaired, with slight haloing effect around some of the backstamping and some letters of signature. Very good condition. Sold for $7,200. 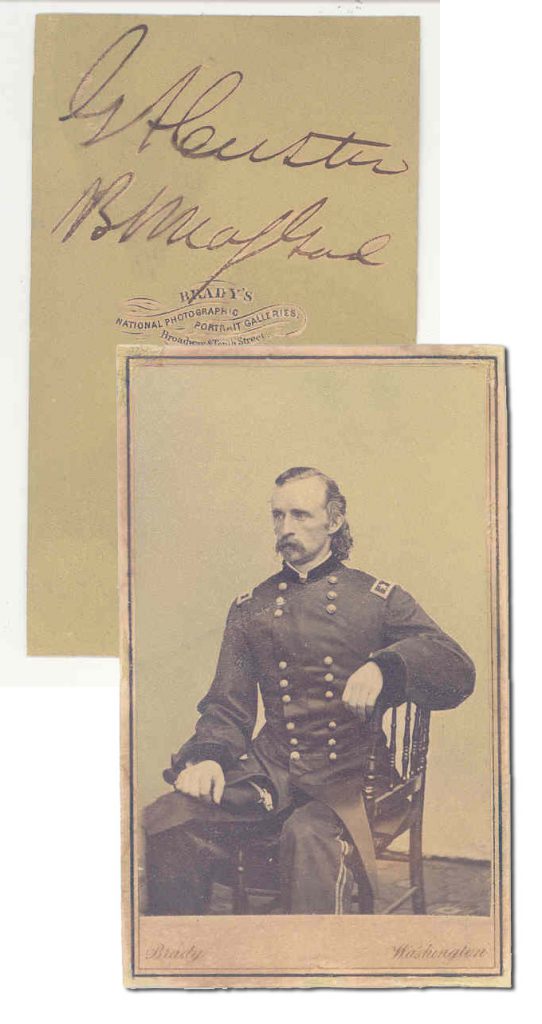 George Custer autograph on a check from 1872. Partially printed Planters National Bank check is signed ”GA Custer” and made out in his hand to ”First National Bank Nashville Tenn” in the amount of ”Three hundred & sixty five” dollars. Check is printed with a location of Louisville, KY, and the date is filled in as 4 October 1872. A George Washington Internal Revenue stamp is affixed to the lower left. Endorsed ”W.C. Butterfield / Pr T Cooley” to verso by the cashier and assistant cashier of the First National Bank of Nashville. Measures 7” x 2.75”. Near fine. Dark George Custer autograph. Sold for $6,691. 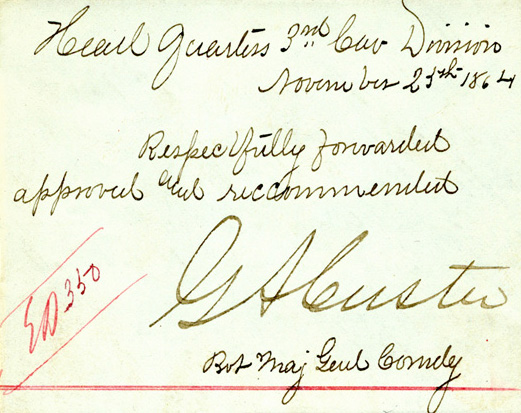 George Custer signed envelope addressed to ”Mrs. Genl. GA Custer” at ”Fort Leavenworth Kansas”, with an additional ”Pen Courier / Nov. 10” in his hand. Envelope measures 5.5” x 3” with original 3-cent stamp intact. Someone has written the date ”Nov 9 68” in pencil to augment the postmark, which is unclear. Minor toning and torn right edge from the removal of the letter. Very good.  Sold for $1,875. 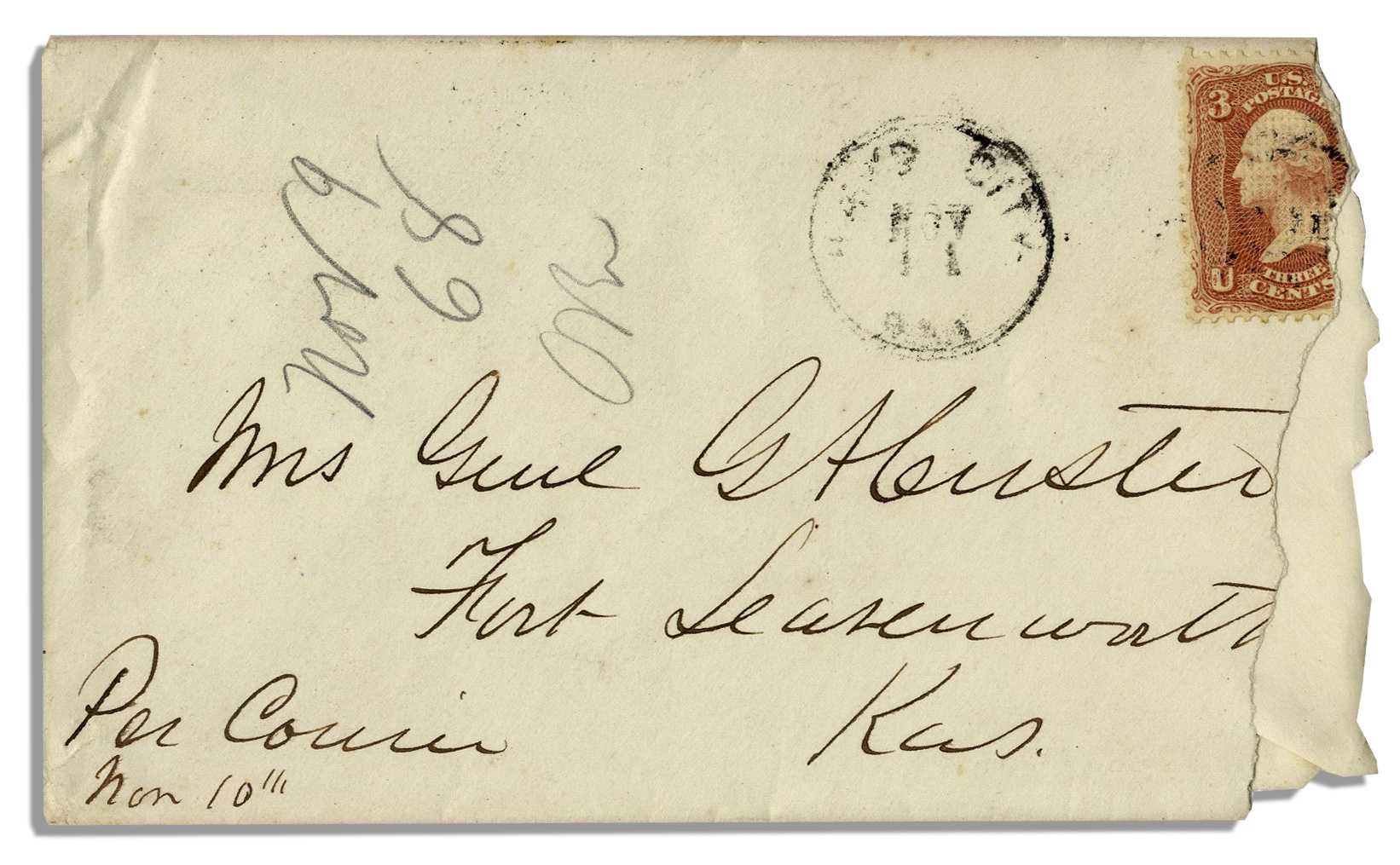 George Custer signed envelope addressed to ”Mrs. Genl. Custer” at ”339 Penn Ave / Washington, DC”, with an additional ”Aug 31” in his hand. Postmarked from Washington, D.C. on 3 September 1864, the year the General married his wife Elizabeth. Measures 5.5” x 3” with original 3-cent stamp intact. Minor toning and torn right edge from the removal of the letter. Very good condition.  Sold for $938. 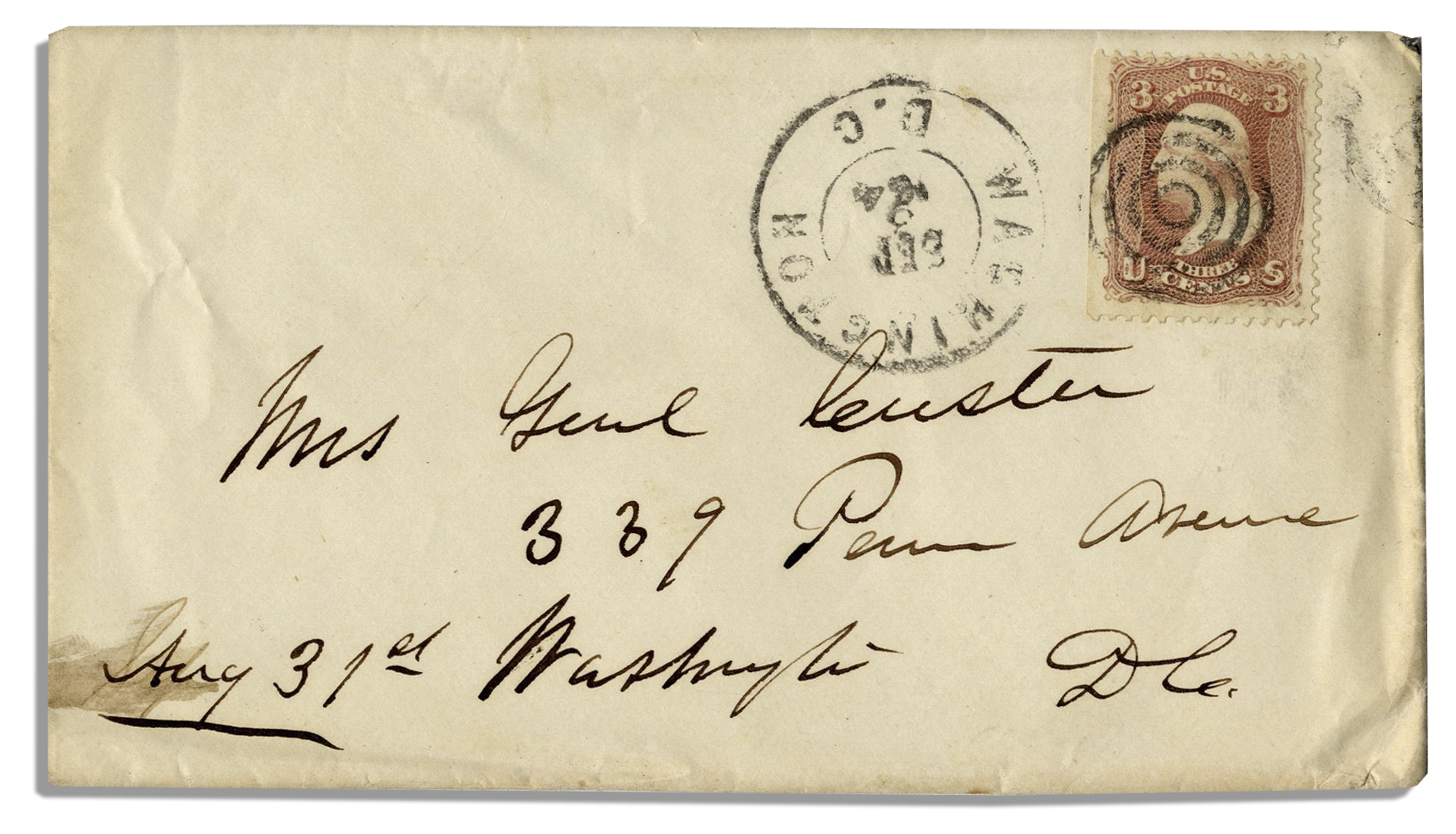 FREE APPRAISAL. If you are looking to buy, auction or sell a George Custer autograph, please email Nate@NateDSanders.com or phone (310) 440-2982.

We offer the following services for your George Custer autograph: