To auction, buy, consign or sell a Ferdinand and Isabella autograph, please contact Nate@NateDSanders.com or call (310) 440-2982.

King Ferdinand V and Queen Isabella I of Spain document signed “Yo el Rey” and “Yo la Reina”, dated 22 July 1493 from Barcelona. Dated just a year after the Reconquista of the Iberian Peninsula from the Moors and the beginning of Spain’s imperial conquest of the New World, document written in Spanish shows the importance of establishing the King and Queen’s authority over their domains. Document names Juan de Ribera, Captain-General of the Navarra frontier, to act as their Majesties’ agent. It requests: “…that he may speak to you of Our transactions which We place at your disposal and We request that you fully vouch for and guarantee that such deeds be executed…” Below the bold royal signatures the document ends: “por mandado de la Rey e la Reina” translated, “by order of the King and the Queen.” Document measures 8.5″ x 5.75″ on one page with a notation on verso. Very good condition. Sold for $11,000. 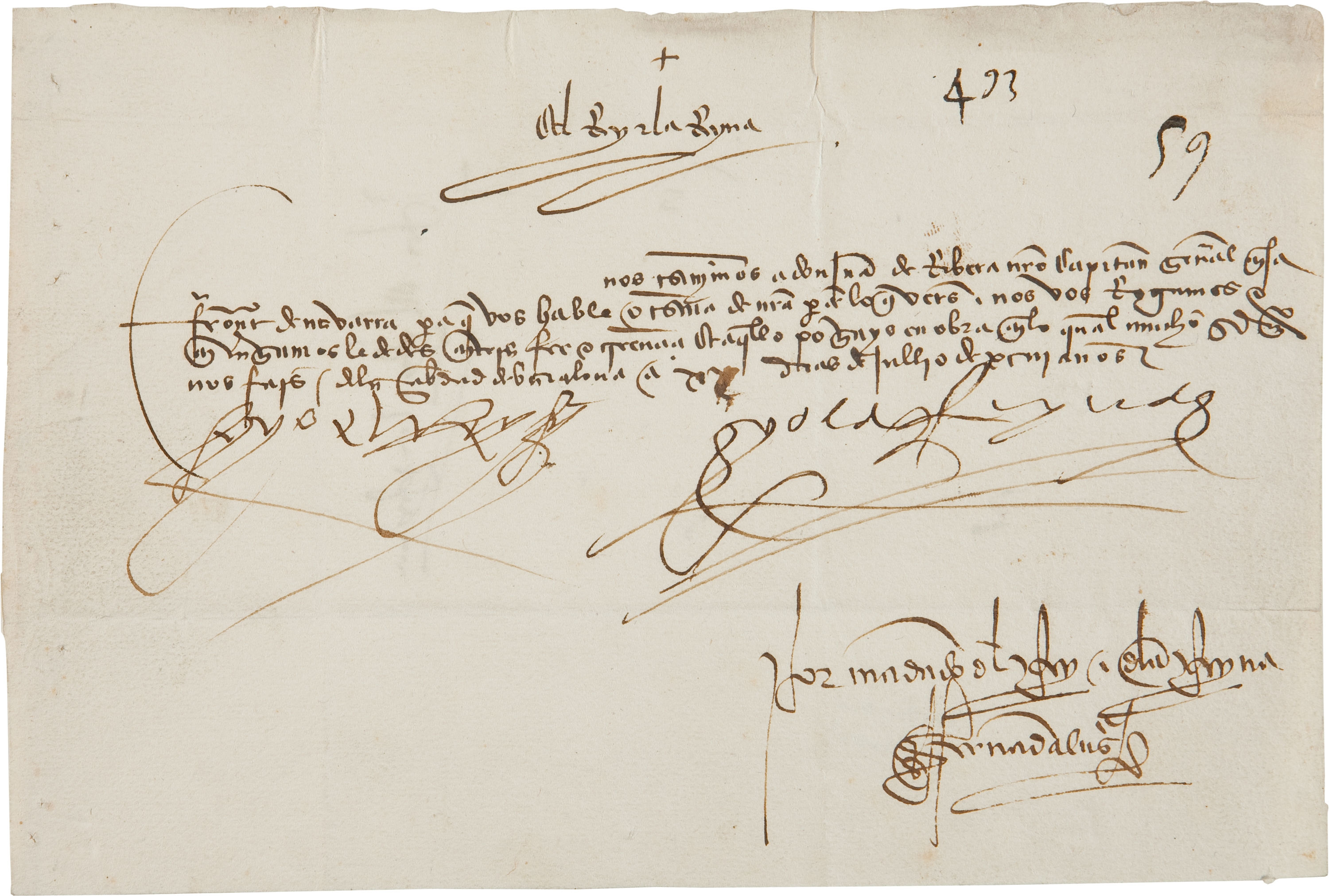 Ferdinand II and Isabella I, the Spanish King and Queen, official document signed. The Catholic monarchs sign this document regarding the Moorish city of Loja on 29 November 1489, in the thick of the Spanish Inquisition targeted at Spanish Muslims and Jews. The document concerns the city of Loja (called a ”flower among thorns” by Isabella), which had been captured by Christians in 1486 and, three years later, erupted in tension between different factions concerning its economic development. Ferdinand and Isabella make clear which faction they side with: ”…all the citizens who wish to build taverns and ovens, and grain mills and stamping mills in the city…in ancient buildings…” should be permitted to do so, they write. No action against them is to be taken ”…under penalty of our mercy…” Signed ”Yo el rey” and ”Yo la reyna”. Document is addressed to the judges, justices of the peace, officials, gentlemen and notables of the city of Loja. Single page measures 8.5” x 7.25”. Both royals sign with a large penwork flourish. Some ink bleeding to text and dampstaining to lower corners. In very good to near fine condition.  Sold for $6,544.

Isabella I of Spain document signed, “Yo la Reina”. Beautiful and ornate Spanish-language document is datelined Madrid, 22 May 1500, at the apex of the Spanish Inquisition and just four years before her death. Document itself measures 8″ x 10.75″, framed with a portrait of the Queen to a size of 19.25″ x 17.25″. Two pairs of closed chevron-shaped cuts, else near fine condition. Sold for $2,188. 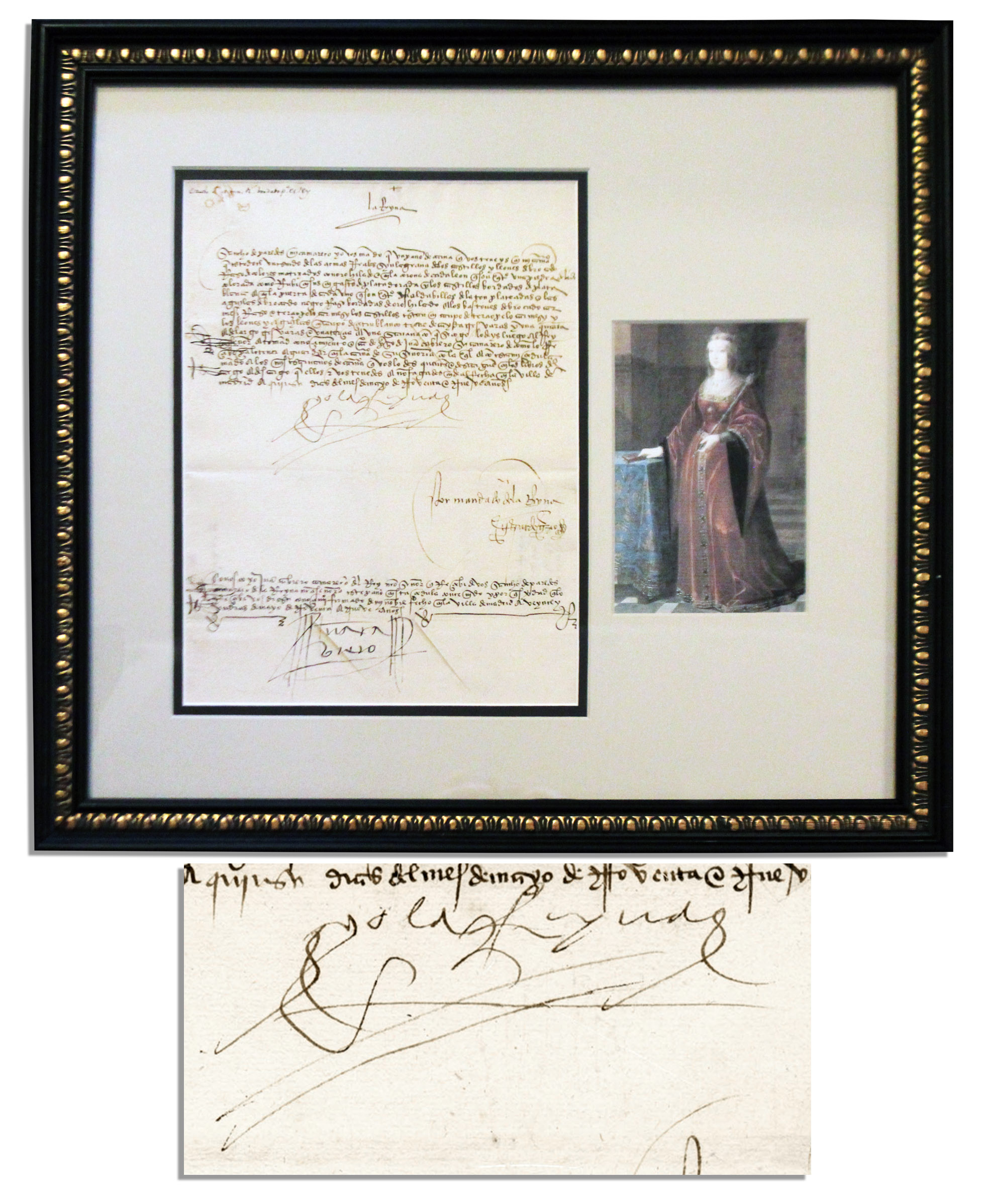 And, last but not least, here is a Ferdinand and Isabella autograph on a document in our November 2016 auction:

The Catholic Monarchs, Ferdinand II and Isabella I signed document as King and Queen of the Spanish Empire. Spanish document, circa late 15th century, is signed in large bold writing, “Yo el Rey” (I the King) and “Yo la Reyna” (I the Queen). Single page document measures 8″ x 9.75″ Folds, small areas of worming and irregularly trimmed edges. Overall very good to near fine given age. Accompanied by a COA from University Archives.  Reserve $5,000.

To auction, buy, consign or sell a Ferdinand and Isabella autograph, please contact Nate@NateDSanders.com or call (310) 440-2982.