A Charles Darwin Autograph Can Be More Valuable than Albert Einstein

Important Charles Darwin Autograph Letter Signed From 1860 — Darwin Writes in Detail About His Famous Book: “…the Origin of Species, of which I am now preparing a corrected edition…”

Important Charles Darwin autograph letter signed, dated 12 December in 1860, approximately a year after publication of the first edition of “On the Origin of Species” and three weeks before the second edition, of which Darwin writes here. Writing from his home in “Down Bromley Kent”, Darwin writes to George Charles Wallich, author of “Notes On The Presence Of Animal Life At Vast Depths In The Sea”, to which Darwin seeks information. Letter reads in full, “I beg permission to thank you sincerely for sending me your ‘Note on Animal Life at Vast Depths’. It has interested me extremely. You have indeed made a grand beginning at an admirable field of research. If you would not think me very unreasonable, you would do me a great favor, if you would inform me on our points we noticed in your notes. In the account given in the Times, it is stated that the machine or bases either often or sometimes penetrated through the foraminifer deposits into different underlying matter. This would show that the foraminifer deposit was sometimes or often thin; and this is the point on which I am anxious for information – It bears on the decay of the exuviae of organisms at the bottom of the sea; and is important for me in relation to some few passages in my Book on the Origin of Species, of which I am now preparing a corrected edition. You allude also to bare rock at the bottom of the sea. Have you any reason to believe extensive areas are bare? About the borer I had with hesitation though of quoting the Times; but if the facts are true, I should of course infinitely prefer just alluding to the case on your authority. What a wonderful fact- about the Ophiura and what a capital proof of the foraminifer having been alive and their discovery in their stomachs. Do you not think that you are rather bold in inferring that the basaltic pebbles were rounded at such great depths? Are you sure they were not dropped by icebergs either recently or at closed of the glacial period? With my best thanks and apologies for taking you, I remain dear sir from yours faithfully / C. Darwin (Charles Darwin autograph)/ P.S. Is it not a most curious fact that the water at such profound depths and under such a vast pressure, should retain oxygen for the respiration of the animals mentioned by you.” Five page letter is written in black ink on card-style paper (front and back), with postscript on separate smaller sheet. Folds, minor losses at fold intersections, small holes from removed staple, some discoloration and toning, but overall very good condition, with dark writing. A fantastic letter by Darwin, showing the detail and collaboration that resulted in his seminal work, which lays the foundation for the theory of evolution.  Dark Charles Darwin autograph. 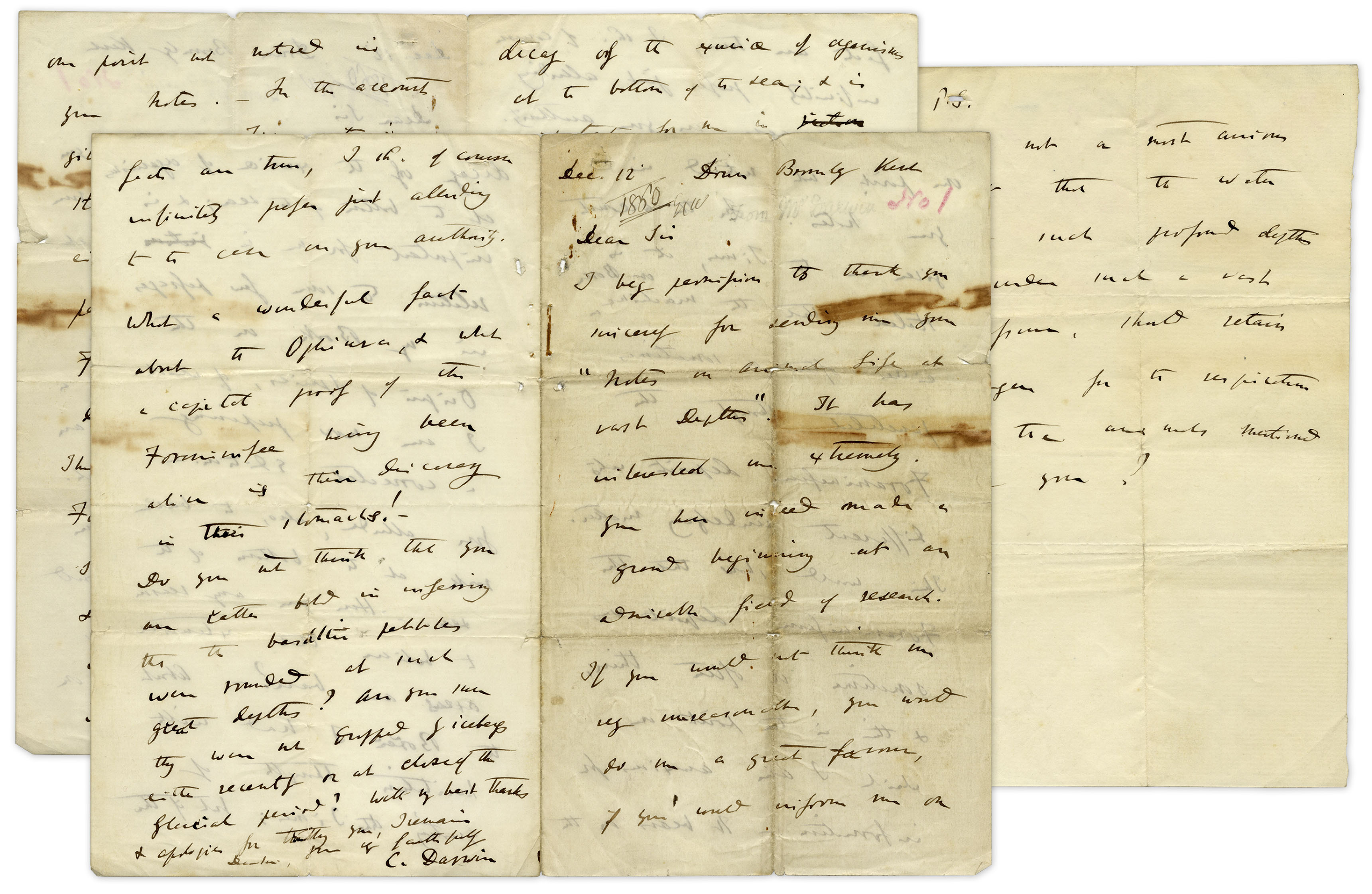 Important Charles Darwin Autograph Letter Signed From 1860 — Darwin Writes in Detail About His Famous Book: “…the Origin of Species, of which I am now preparing a corrected edition…”

Charles Darwin autograph letter signed. Addressed simply “My dear Sir”, but believed to have been sent to William Henry Flower, Curator of the Hunterian Museum at the Royal College of Surgeons, who had apparently arranged to obtain photographs of the skull of a Niata ox, donated to the museum by Darwin. Dated May 25th (a pencil annotation in another hand reads “1863”), Darwin writes in full, “As a cheque will probably be less troublesome than a P. Order, I enclose one with my many thanks for the photographs. M. Quatresages has received them and is much pleased and surprised at the appearance of the Skull. With my sincere thanks for your good kindness. Believe me. Yours sincerely, C. Darwin”. Darwin references Jean Luis Armand de Quatrefages, the French physician, naturalist and ethnologist, who was an opponent of Darwinism. An impressive letter by the father of the Theory of Evolution in very good condition. 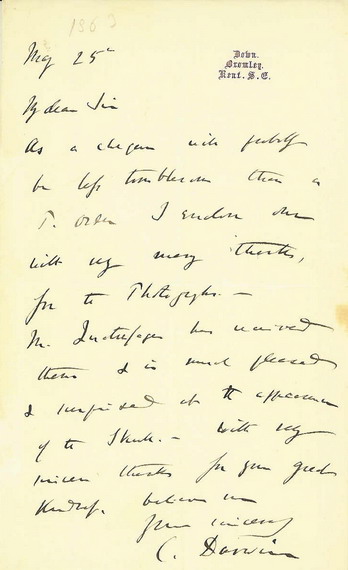 Charles Darwin autograph letter signed and dated 24 July 1853. Signed and inscribed to John Murray, “My dear Sir, I venture to ask you to do me the favour to direct and post the enclosed letter to Mr. Galton, the author of the very interesting volume lately published by you. My dear Sir, Yours very faithfully, C. Darwin.” Darwin references his cousin, Francis Galton, best remembered for founding the Eugenics Movement and for his extensive travels to unexplored parts of southwestern Africa from 1850-52. Galton’s book, “Narrative of an Explorer in Tropical South Africa,” was published to great acclaim in the same year this letter was written. Darwin had just finished reading Galton’s book when he sent this note. A fascinating letter by the espouser of Evolution and Natural Selection in very fine condition. 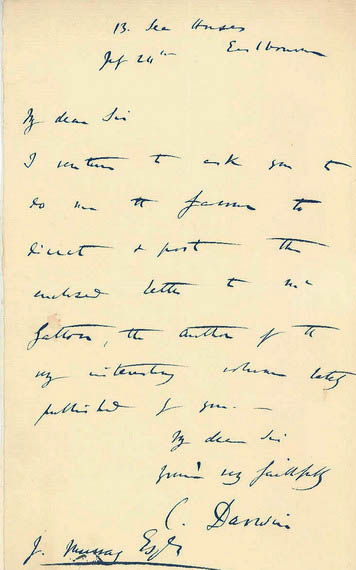 Here are some of the many benefits you will enjoyed when consigning with us: