Bruce Lee autograph letter signed, with exceptional content explaining the philosophical and spiritual underpinnings of Gung Fu martial arts. Dated 4 April 1964 with the original envelope postmarked from Seattle, Lee writes to an aspiring martial arts student Gene Snelling, just before Snelling deployed to Vietnam. The inspiring letter reads in full, “Dear Gene, Your letter arrived [at] the Institute to-day, and I have to say I am impressed by your enthusiasm. / The Jun Fan Gung Fu Institute of Seattle began only six months ago. The aim is to teach the true ‘Way’ of Gung Fu all over the U.S. At present the Institute has around 45 students and meet 3 times a week – Tues. & Thurs. night 8-9:30 p.m. and Sunday morning 10-11:30 a.m. / Gung Fu means discipline and training toward the ultimate Reality of the object – be it on health promotion, on mind cultivation, or on self-protection. / No distinction is made to separate between the opponent and the self because the opponent is but the complementary part of oneself. There is then no conquering, struggling or dominating, but to fit harmoniously one’s movement into that of the opponent (when he expands, you contract; when he contracts, you expand, each being the cause and result of the other.) There is then a ‘oneness’ result. / The closer to the source of true martial art, the less wastage of movement there is, and a good Gung Fu man is a simplifier – to express the utmost in the minimum of motion and energy. Thus profound simplicity, not fundamental, is the key word and simplicity, by the way, is the natural result of the highest cultivation. This simplicity is the last stage of art. / The highest stage occurs when a person is devoided of self-consciousness and his feeling and experience expresses himself freely. The actions will be being so of themselves without straining or striving. / I’m invited to give a demonstration in Calif. next month (May 2) in Alameda. If you happen to be some-where near by you can look me up in James Lee’s address. I’ll be there from May 1-May 3 for the weekend. This summer I might g to Toronto and teach for two weeks and will stop by for the World’s Fair at N.Y. so if opportunity arrives, maybe we can meet each other. / Sincerely / Bruce J.F. Lee”. Three page letter is on three sheets, ideal for framing. Pages measure 7.25″ x 10.5″. Light browning at edges, but overall in near fine condition with bold handwriting, composed using a felt-tip pen. Letter is accompanied by original envelope, handwritten by Lee, with his return address as the Jun Fan Gung Fu Institute on University Way in Seattle, Washington.  Sold for $37,500.

Bruce Lee signed student file for actor Steve McQueen, who studied under Lee at the Jun Fan Gung Fu Institute. McQueen was also Lee’s close friend and a pallbearer at his funeral in 1973. This file, entitled “Bruce Lee’s Tao of Gung Fu” is handwritten by Lee on the cover, “Steve McQueen” and signed “Bruce Lee” by him inside, under “President’s Approval” of McQueen’s promotion. Lee also hand writes McQueen’s personal information, including his age, address, phone numbers, marital status, profession, etc., and notes his date of promotion as “Oct. 17 1967”. Heavy paper folder measures 9.5″ x 11.5″, with the Institute’s orange and gold yin/yang symbol on the cover. In near fine condition. Originally lot 27 of Superior Galleries’ Bruce Lee auction on 7 August 1993, there consigned by Lee’s wife, Linda Lee Caldwell. It sold for $24,361. 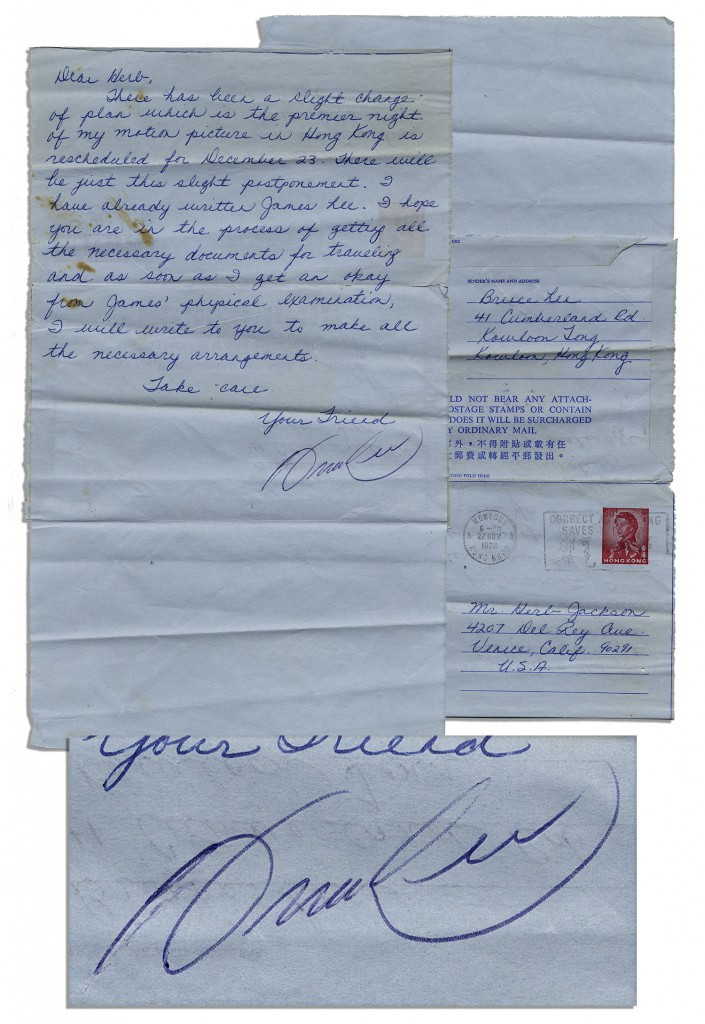 Bruce Lee autograph letter signed. Lee’s letter was sent from Hong Kong just before the premier of ”Return of the Dragon” aka ”Way of the Dragon” in that city. It is addressed to his close friend and Jeet Kune Do protege Herb Jackson in Los Angeles. Postmarked 22 November 1972, the letter reads in full, ”Dear Herb, There has been a slight change of plan which is the premier night of my motion picture in Hong Kong is rescheduled for December 23. There will be just this slight postponement. I have already written James Lee. I hope you are in the process of getting all the necessary documents for traveling and as soon as I get an okay from James’ physical examination, I will write to you to make all the necessary arrangements. Take care, Your Friend, [signed] Bruce Lee autograph”.  Sold for $10,208.

Bruce Lee autograph on his essay from high school, written entirely in his hand and personally owned by him. Essay appears to be an English dictation exercise, signed ”Bruce Lee” on the front, written as a student in the late 1950s at St. Francis Xavier College in Kowloon, Hong Kong. Among the earliest known examples of Lee’s handwriting and signature, we see a young Lee struggle to learn the English language and methodically correct his mistakes within the essay. At this time, Lee was starting to pursue martial arts, and the famous discipline and hard work for which he is known is clearly evident in his schoolwork as well; with his corrections, the essay appears near perfect in grammar and spelling. One can also see the beginnings of Lee’s famous, flowing signature and elegant handwriting here. Lee writes about a stranded pilot in the essay, in part: ”The history of aviation is full of adventures, and their happy outcome has proved how great is man’s ability to brave the dangers which confront him. Not long ago an aviator, while flying over a part of Africa, met with engine trouble at a time when visibility was poor, and was compelled to descend in an swamp at the edge of a large lake. His machine turned upside down and became deeply embedded in the mud. The pilot, though injured in the head, managed with great difficulty to extricate himself…He trod on what he thought was firm ground. Suddenly it moved and he found it was a crocodile. Only after five hours exertion did he reach safety; His clothes were torn to shreds, but he was thankful to be alive…” Shortly after this essay was written, Lee’s parents pulled him out of school and sent him to live in the United States with his sister, as they feared he would be killed by a local gang who Lee often fought with on the street. Sheet measures 6.5” x 8”. Majority of writing appears on front page with a few lines on verso. Composed in blue ink with corrections by Lee. Near fine condition. Originally part of lot 14 of Superior Galleries’ Bruce Lee auction on 7 August 1993, there consigned by Lee’s wife, Linda Lee Caldwell.  Very early Bruce Lee autograph.  Sold for $8,319. 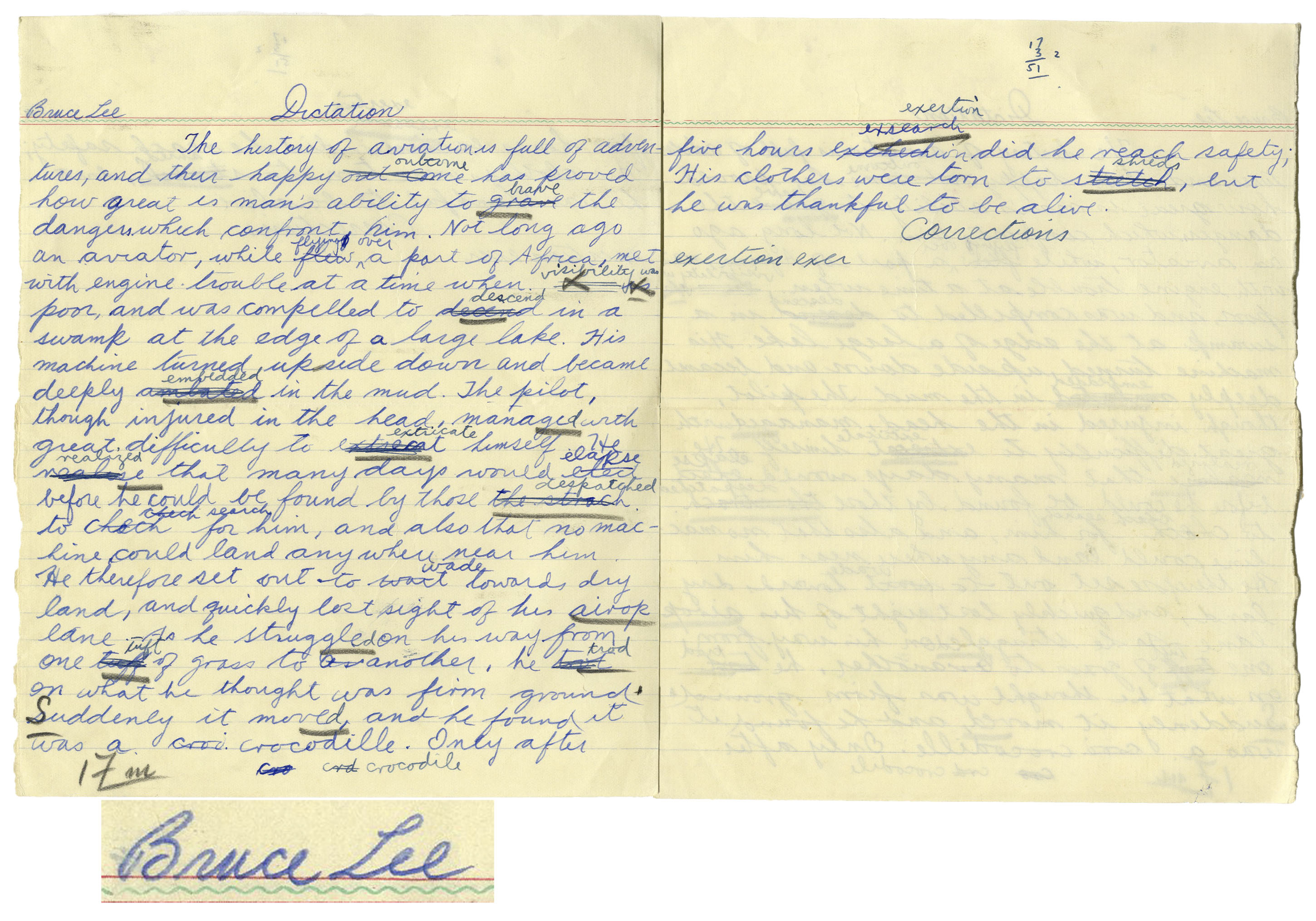 Bruce Lee signed and hand-notated interview article. The great martial artist and movie star signs the last page on verso, ”Bruce” in blue ink. Typed interview with Lee runs six pages and is concurrent with his role on ”The Green Hornet” TV series, which aired from 1966-67. Article contains a good deal of biographical information on Lee, including his background in education and martial arts training, along with anecdotal reports such as, ”…he can grab a dime right out of your palm…and left a penny clutched in our hand in exchange for the dime, a switch he executed so swiftly it almost seemed magical…” Article for a magazine interview features hand notes, possibly by Lee correcting simple spelling errors and the like. In addition, pencil sketches to verso illustrate martial arts training equipment including a shin guard and striking shield. Sheets are stapled at upper left corner and measure 9” x 12”. Significant toning, foxing and creasing, else very good. From the impressive collection of Herb Jackson, whose well-documented friendship with Lee began while he trained in Jeet Kune Do at Lee’s Los Angeles martial arts academy, located at 628 West College St. in Chinatown. Bruce Lee autograph is just signed “Bruce”.  With a COA from Herb Jackson’s son.  Sold for $6,970. 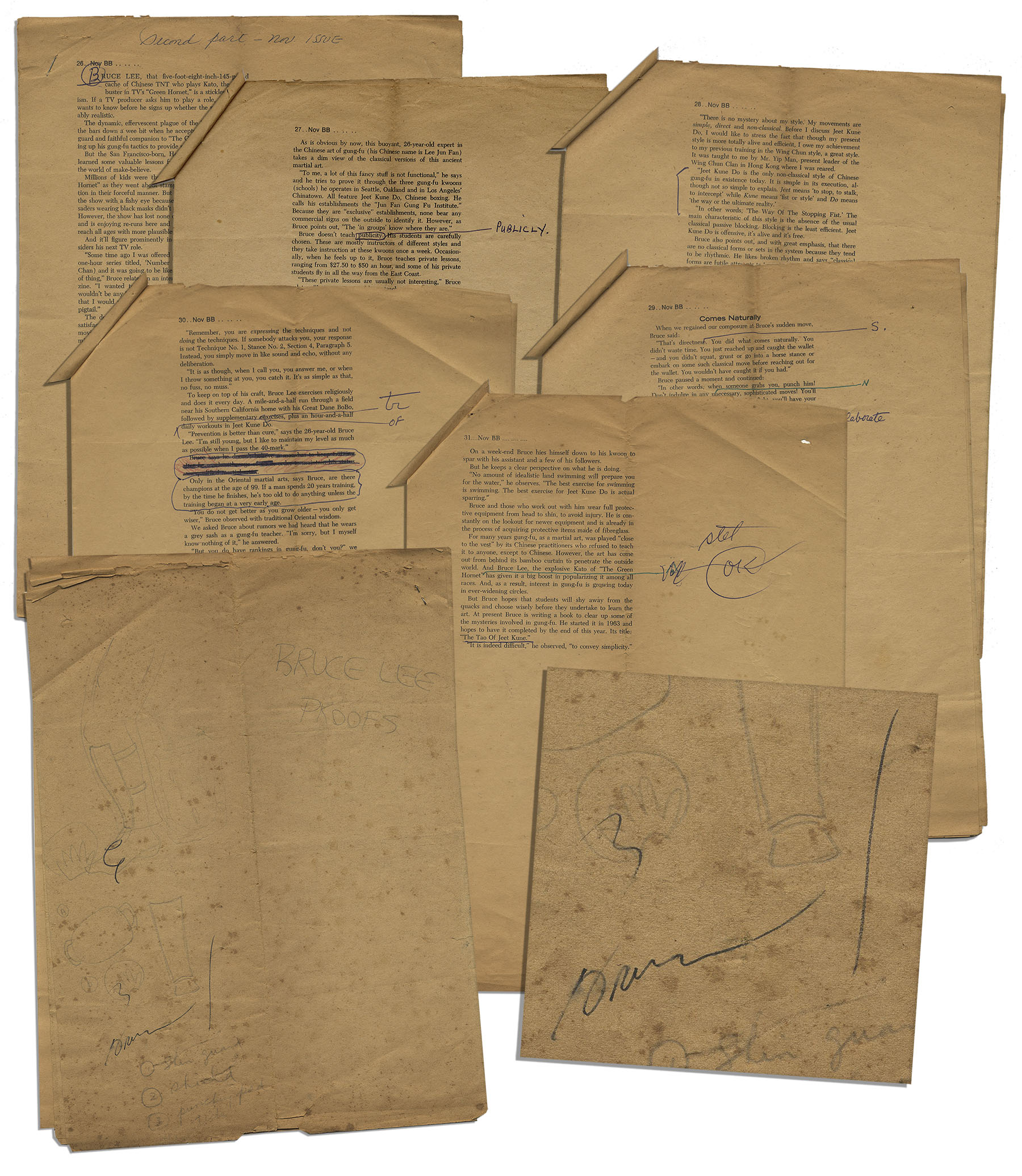 Bruce Lee Autograph on His Check

Above is a Bruce Lee autograph on a signed check on the account of Bruce Lee’s Jun Fan Gung Fu Institute in Oakland, California dated 19 October 1964 to John Chorbajian in the amount of $135 ”for rent” from 20 October to 20 November 1964, noted in Lee’s hand. Dark Bruce Lee autograph. Sold for $6,691. 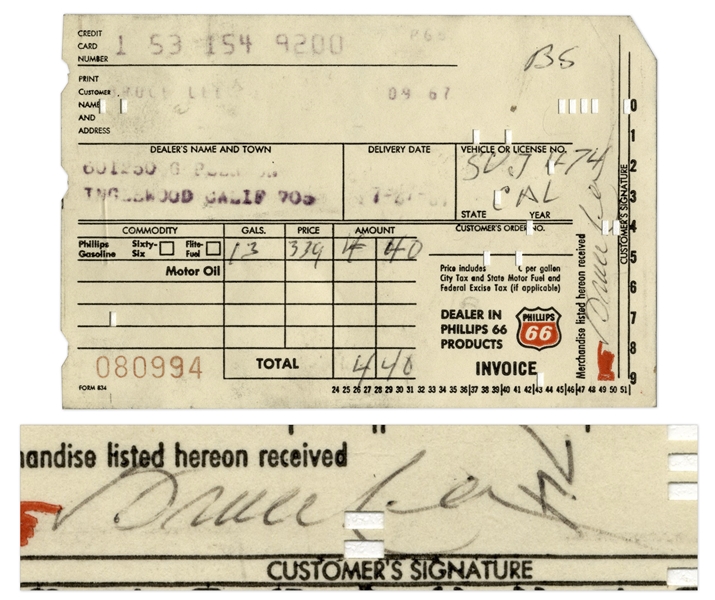 Bruce Lee Autograph on a Gas Receipt From 1967

Bruce Lee autograph on a receipt from 1967. Receipt is from the Phillips 66 Gas Station in Inglewood, California, showing a purchase of 13 gallons of gas for a total of $4.40. Features Bruce Lee’s signature along the right hand side, which is bold and legible. Includes Bruce Lee’s California license plate number, SV7-474. Receipt signed the same year as the last episode of ”The Green Hornet” and the year Bruce Lee opened his third Jun Fan Kung-Fu Institute School in Los Angeles. Measures 4.75” x 3.25”. Hole punch through bottom of ”L” in signature, otherwise near fine condition.  Nice Bruce Lee autograph.  Sold for $4,125. 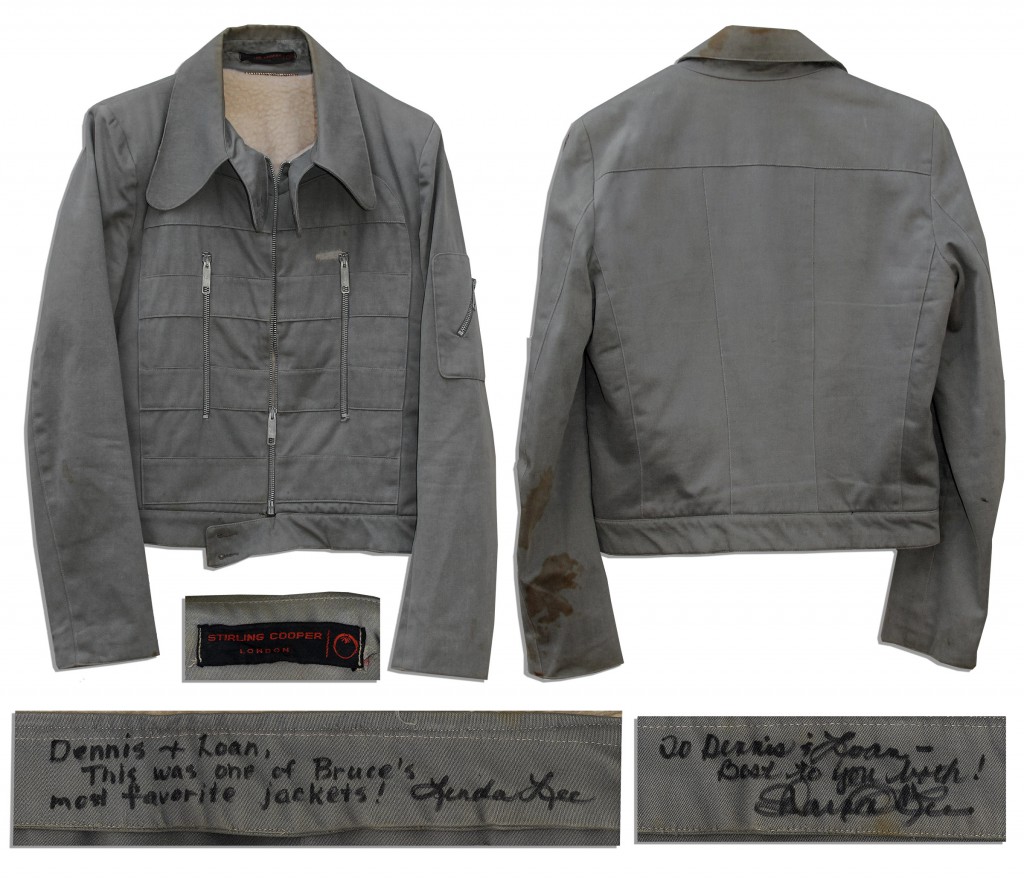 Mrs. Bruce Lee Autograph on a Grey Cotton Bruce Lee Worn Jacket — With a COA From His Widow, Linda Lee Who States It Was One of Bruce’s Favorite Jackets

Above is a Bruce Lee personally owned and worn grey cotton jacket, signed and inscribed by his wife and daughter. ”Stirling Cooper London” brand jacket has a nice shearling lining to interior, and two zippered pockets to front.  In black marker to the inside of jacket, Bruce’s wife and daughter write: ”Dennis + Loan, This was one of Bruce’s most favorite jackets! Linda Lee”. And, ”To Dennis & Loan — Best to you both! Shannon Lee”.  It sold in our June 2016 auction for $25,000.

1970 National Karate Championship plaque, awarded to Bruce Lee. Although Bruce Lee never participated in any martial arts tournaments other than demonstrations, this is one of the few awards he accepted. Plaque reads in full, “Presented to / Mr. Bruce Lee / Guest of Honor / at / 1970 National Karate Championship / Washington, D.C. / May 24, 1970 / Presented by / Jhoon Rhee”. Measures 12″ x 16.25″. Affixed to mat board for framing. Light scratching, otherwise near fine. Originally lot 139 of Superior Galleries’ Bruce Lee auction on 7 August 1993, there consigned by Lee’s wife, Linda Lee Caldwell and with her COA. The minimum bid is $10,000. 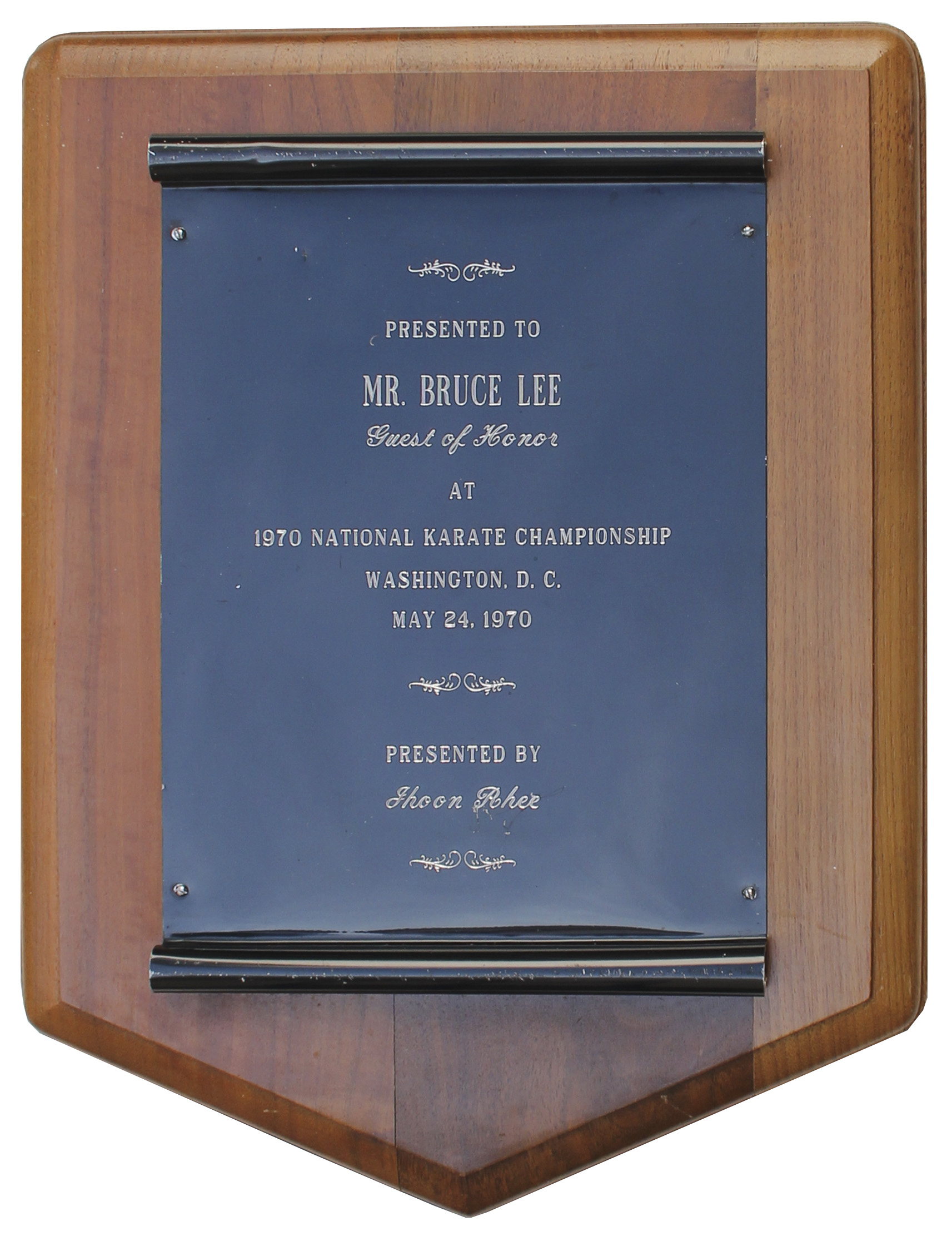