A Winston Churchill Autograph On a Book, Document, Letter or Photo is Many Pounds

This is the actual document announcing Winston Churchill’s resignation from the office of Prime Minister, dated 6 April 1955. Winston Churchill autograph is on this letter, which is written after suffering a severe stroke in 1953. Churchill’s health deteriorated quickly affecting both his speech and ability to walk.

Written on official 10 Downing Street stationery, letter to Conservative politician John Harvey reads in part: ”…For some time past I have not felt that at my age it would be right for me to incur such new and indefinite responsibilities I have therefore tendered my resignation to The Queen”. Churchill endorses Anthony Eden as his successor in upholding ”…the causes of Tory democracy which Lord Beaconsfield proclaimed, which Lord Randolph Churchill revived, and which I have tried to serve…[signed] Yours sincerely / Winston S. Churchill autograph”.  A very historical and important Winston Churchill autograph.  Sold for $12,500. 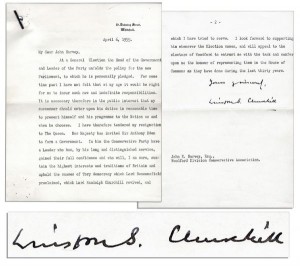 Winston Churchill autograph on a typed letter, dated 11 May 1943, to Cyril Gordon Illingworth, captain of the Queen Mary, thanking him for ”the efficient conduct of our journey”. The English Prime Minister traveled by sea to the U.S. to join FDR in war planning at the Third Washington Conference (code named TRIDENT), held in Washington, D.C. from 12 May to 27 May 1943. The Italian Campaign, air attacks on Nazi Germany and the Pacific War were on the meeting agenda. Churchill was accompanied by Averell Harriman, FDR’s special envoy to Europe. Lot includes a telegram from Harriman to Illingworth. A third telegram is from Hastings Ismay, Churchill’s chief military assistant and staff officer, to Illingworth. Churchill letter, measuring 7.5” x 9.5”, on 10 Downing Street letterhead, is signed, ”Winston S. Churchill”. The Harriman telegram, measuring 8” x 10”, on U.S. Embassy letterhead, is signed, ”W.A. Harriman”. The Ismay telegram, measuring 7” x 8.75”, on blindstamped Office of the War Cabinet letterhead, is signed, ”Hastings Ismay”. Tape residue, else very good plus condition.  Sold for $3,691. 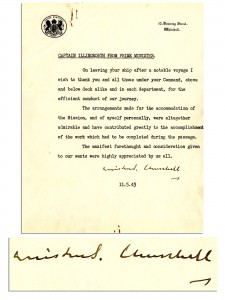 Tender Winston Churchill autograph letter signed to his secretary Mrs. Violet Pearman, who was out sick at the time. Dated 18 May 1938, letter was written just two months after he delivered his House of Commons speech on the Danube Basin warning of the Nazi threat. His personal Westerham stationery reads: ”Dearest Mrs. P, I am so grieved at your illness – due I fear largely to your devotion to my interests & fortunes. I am sure that all you need is a good long rest with out worries of any kind. Now do help in this. Lie absolutely fallow and you will recover. There is no need to fret about anything – tho I do not pretend I do not miss you badly. Do not let your case be a burden. Why don’t you tell your solicitors to come to me. I will have it all properly looked after. Remember you can count on me for the 50 pounds I promised. All I want you to do is get well, and this you can do by a good holiday. I will look after you. Yours affectionately, Winston S. Churchill”. Two page letter, written front and verso, measures 5” x 8”. Foxing, creasing and minor chipping to the lower edge. Dark Winston Churchill autograph. Very good condition.  Sold for $2,886. 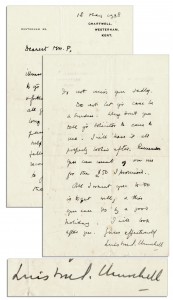 Winston Churchill Autograph Letter Signed — ”…you need a good long rest, if you are to recover yr health. I have therefore decided to offer you a years leave at a salary of 3 pounds a week…”

Winston Churchill autograph letter signed.  Concerned letter from Winston Churchill to his secretary, Mrs. Violet Pearman, dated 1 November 1938. Pearman had been Churchill’s secretary since 1929. Handwritten letter to ”My dear Mrs. P” reads in part, ”…I talked to Dr. Brand yesterday, & have come to the conclusion that you need a good long rest, if you are to recover yr health. I have therefore decided to offer you a years leave at a salary of 3 pounds a week. If you feel able to look after the literary accounts, & to do a little work with the Press cuttings, all the better. But it is just as you feel…Of course if, as I hope, you make rapid progress, you can resume yr duties here. Meanwhile please come & see us, & use the garden whenever you feel inclined, and the sun shines…Winston Churchill”. Two page letter, written front and verso on Churchill’s Chartwell stationery, measures 5” x 8”. Chartwell, in Westerham, Kent, was the site of Churchill’s family home and his beloved hillside gardens. Minor foxing and creasing, else near fine.  Sold for $2,623. 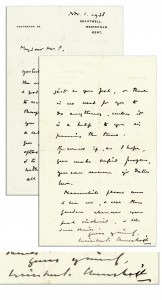 Winston Churchill Autograph in His Book, ”My Early Life, A Roving Commission” 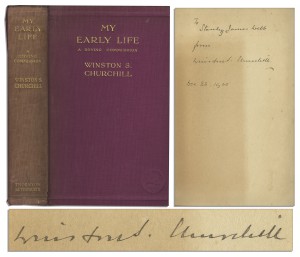 Winston Churchill Autograph in His Book, ”My Early Life, A Roving Commission”

Winston Churchill autograph on his photo, a magnificent close-up portrait of the British Prime Minister staring intently out of frame. Churchill clearly signs to mat underneath photo, ”Winston S. Churchill”. 8” x 10” photograph is mounted to board, and matted to an overall size of 11.75” x 14.25”. Light uniform toning to mat, and areas of minute foxing to edge of photo. Very small area of discoloration to upper left of photo. Dark Winston Churchill autograph.  Overall near fine.  Sold for $2,188. 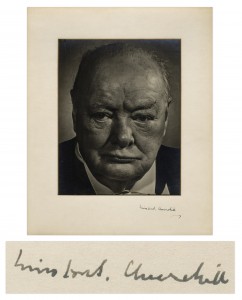 Winston Churchill Autograph on a Mount of a Photo