To buy, sell or consign a U.S. President signed book or any other autographs or first editions, please email [email protected] or call Nate D. Sanders at (310) 440-2982.  Thank you.

In seven days, we will be auctioning a very rare U.S. President signed book, being a beautiful Thomas Jefferson signed copy.  Here is the description:

Thomas Jefferson Scarce Signed 1st Edition of the First U.S. Census — One of Only a Handful Signed & Ratified by Jefferson

Extremely rare Thomas Jefferson signed first edition of the first U.S. census, one of only a handful of Jefferson signed copies sold at auction in the last 40 years. As Secretary of State, Jefferson called for the first official census, and ratified the results of only a handful, this being one of them, signed boldly ”Th: Jefferson” on page 56. Published in Philadelphia: Childs and Swaine, 1791. Full title reads, ”Return of the Whole Number of Persons Within the Several Districts of the United States, According to ‘An Act Providing for the Enumeration of the Inhabitants of the Unites States’. Printed in a small number for distribution by Thomas Jefferson as Secretary of State, and from his direct descendant, Thomas Jefferson Coolidge Jr., with Mr. Coolidge’s crested label to front pastedown. Bound in 19th century half-morocco and marbled boards, book measures 5” x 7.25”. This copy appears to be one of the very first printings of the first edition, as it lacks the tipped-in late-returning results from South Carolina often found on page 54. The lower margins of pages 34, 42 and 43 have been shaved by binder, otherwise copy is near fine with a touch of toning and foxing. Volume also includes a press copy of an autograph letter signed by Jefferson, affixed to rear endpaper, dated 8 October 1797, measuring 6.5” x 7.75”. Letter concerns a quarterly dividend of ”a few dollars over 300”, payable to Col. James Monroe. An rare opportunity for the very first census of the United States, signed by its 3rd President, with other such copies selling for approx. $100,000. With provenance from Christie’s 21 June 2013 sale, lot 147, where this copy sold for $62,500. 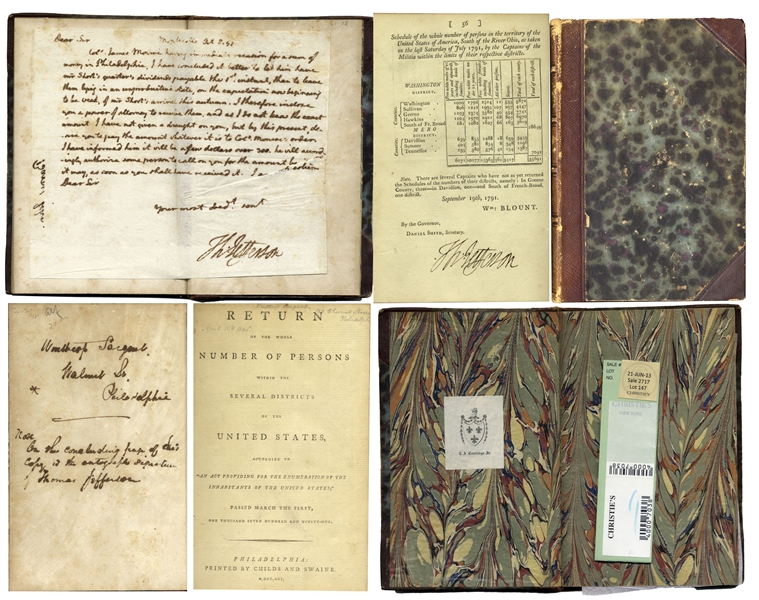 Thomas Jefferson Scarce Signed 1st Edition of the First U.S. Census — One of Only a Handful Signed & Ratified by Jefferson

Bidding starts at only $30,000 here:  Thomas Jefferson Scarce Signed 1st Edition of the First U.S. Census — One of Only a Handful Signed & Ratified by Jefferson

We will also be auctioning off a Thomas Jefferson first edition book, unsigned:

Thomas Jefferson’s important work, ”Notes on the State of Virginia” first U.K. edition. London: John Stockdale (printer), 1787. One of only approximately 1,000 copies printed by John Stockdale and the only book-length work by Jefferson to be printed in his lifetime; it’s been called ”one of America’s first permanent literary and intellectual landmarks”. Measures 5.25” x 8”. Bound in contemporary leather over marbled boards with gilt tooling on spine. As typical, the original map is missing, but instead contains the 1796 edition map, dated 1794. With the signature pages 81-96 printed upside down. Some rubbing to boards and previous owner’s writing on front paste down and title page. Overall in very good condition. Housed in an attractive, custom clamshell box.

We have a lot of experience selling various U.S. President signed book s in the past.  See below for highlights:

John F. Kennedy signs the biography of him published the year of his Presidential election, ”John Kennedy: A Political Profile” by James MacGregor Burns. Harcourt, Brace, and Co.: New York: 1960. The front free endpaper is signed with blue ballpoint pen. Runs 309pp. and measures 5.5” x 8.25”. Toning, creasing and some tears to dustjacket edges, else near fine. With slipcase and PSA/DNA COA.  Sold for $3,691. 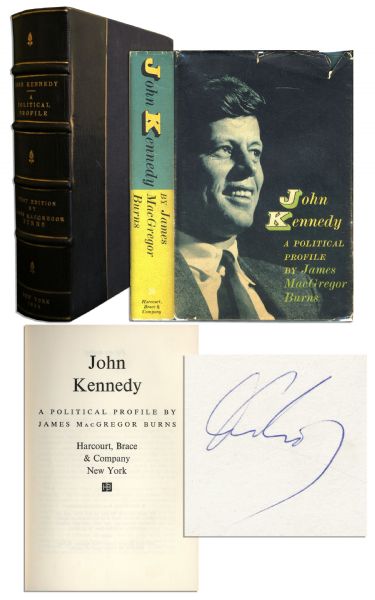 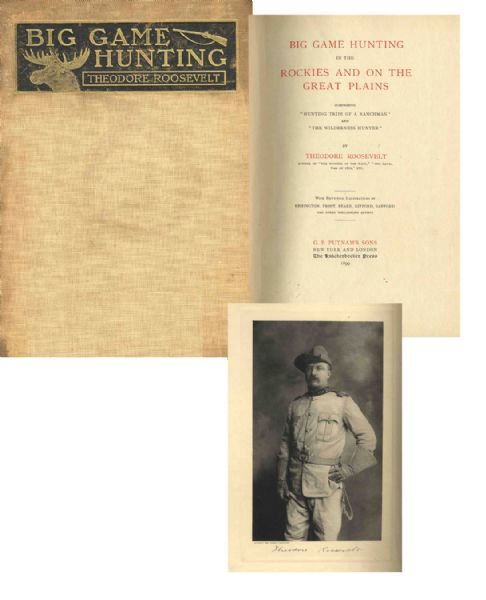 William Henry Harrison signed copy of ”The Token and Atlantic Souvenir”, a very popular annual gift book in the early 19th century. Signed books by Harrison are exceedingly rare and this one is inscribed to 18-year-old Margaretta Wilson, aunt of future President Woodrow Wilson. Inscription reads, ”Miss Margaretta Wilson / from the friend of her father / W.H. Harrison / of / North Bend / Ohio / Steubenville / 11th July 1838” on the title page. Edited by S.G. Goodrich and published by Charles Bowen: Boston: 1836. Margaretta’s father was James Wilson, grandfather of President Woodrow Wilson and publisher of an Ohio newspaper, ”Log Cabin”. Red, embossed leather over boards with gilt lettering on the spine. In fair condition with portion of backstrip missing, covers detached from book, and some toning and foxing.  Sold for $1,943. 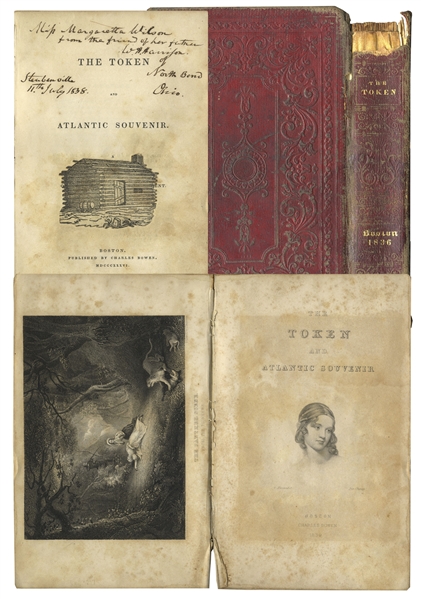 Excellent and rare signed first edition, fifth printing of Franklin D. Roosevelt’s landmark book, ”Looking Forward.” The John Day Company: New York: 1933. Inscribed on the rear free endpaper upside down, ”To Albert Pick with a Merry Christmas from Franklin Roosevelt / 1933”. Bold, clear signature in black ink. FDR signed approximately 200 copies of his first book as President as presentation Christmas gifts during his first year as President. Contents contain a compilation of speeches given during 1932 and relating to the New Deal, with various commentaries added by Roosevelt, ”which bind the material together as a whole.” Includes the rare original 5th printing dustjacket as issued with this presentation example, complete with the unclipped $2.50 price intact. Dustjacket has tattered edges and a few small chips. Hardcover book, measuring 5.5” x 7.75”, is in original blue cloth boards with gilt text. Boards have some minor spotting and sunfading, particularly along spine. Book is splitting along front hinge, though pages are clean and tight. A very rare copy of this classic text in very good condition.  Sold for $1,420. 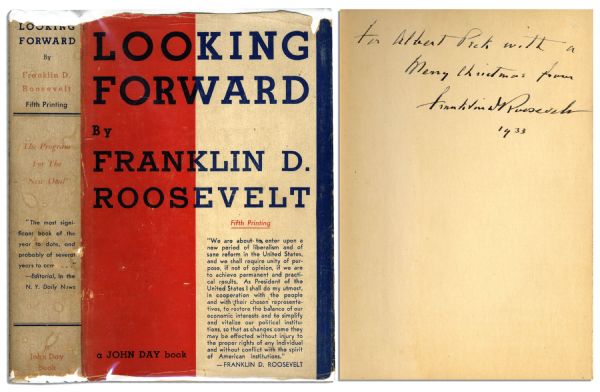 James Garfield Signed Book — From Garfield’s Own Library, With His Personal Library Label

James Garfield signed book and from his personal library, very rare as such. Garfield signs ”J.A. Garfield / Hiram 1857” upon the front free endpaper of ”On the Study of Words” by Richard Trench and published by Refield: New York: 1856. At the time Garfield signed the book, he had returned to Hiram, Ohio as President of Hiram College where he first worked as a janitor 6 years prior. Upon the front pastedown, Garfield’s private library label is present, reading ”Inter Folia Fructus [Among the Leaves, Fruit] / Library of / James A. Garfield / No. 46.b.” Measures 5.25” x 7.5”. Book is in very good plus, well-preserved condition, with just a hint of wear to the boards and interior toning. Housed in a custom-made slipcase.  Sold for $1,204. 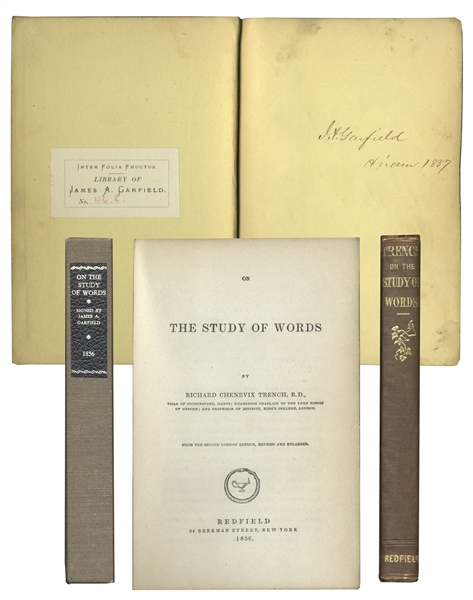 To buy, sell or consign a U.S. President signed book or any other autographs or first editions, please email [email protected] or call Nate D. Sanders at (310) 440-2982.  Thank you.