Lovely Mark Twain first edition set of Mark Twain’s ”Adventures of Tom Sawyer” and ”Adventures of Huckleberry Finn”, bound in publisher’s rarer and generally more desirable blue cloth with gilt accenting. ”Tom Sawyer” is a first edition, second printing (Hartford: American Publishing, 1876) while ”Huckleberry Finn” is a first edition, first printing (New York: Charles L. Webster, 1885). ”Tom Sawyer” printing points include half-title and frontis on same leaf, and no type damage on ”furniture to” on last line of page 17, found in the 3rd and later printings. One of only 748 copies with all edges gilt. All first printing points for ”Huckleberry Finn” are present including the most important table cloth visible underneath the bust of Twain with ”Heliotype Printing Co.” imprint. Both books measure 7” x 8.75”. Light rubbing and shelf wear to both and some internal foxing. ”Tom Sawyer” is in very good condition with the front hinge starting. ”Huckleberry Finn” is in very good plus condition. Internally, both are clean and free of any writing. A very attractive set with the blue cloth still bold and vibrant. 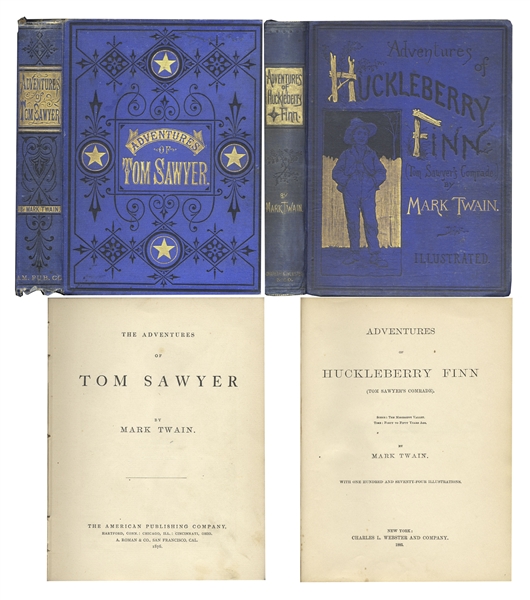 Also at the auction in seven days:

35 volume set of ”The Works of Mark Twain”, signed by Twain on the flyleaf of the first volume with both his given name and famous pseudonym: ”S.L. Clemens / Mark Twain”. This limited edition is #209 of 1,024 copies. Published in New York: Gabriel Wells, 1922-23 after Twain’s death; Twain signed the pages in 1906 prior to its publication. Twain biographer Albert Bigelow Paine also signs volume I, on a separate flyleaf. Volumes each measure 6” x 9”. Most volumes are in very good to near fine condition, including volume I, which has only minor shelf wear. Hinges of volumes XII, XIII, XXXIII and XXXIV are starting to separate, and label of XIII is detached but present. Some toning to labels and scuffing to boards. Entire set is in very good condition overall. 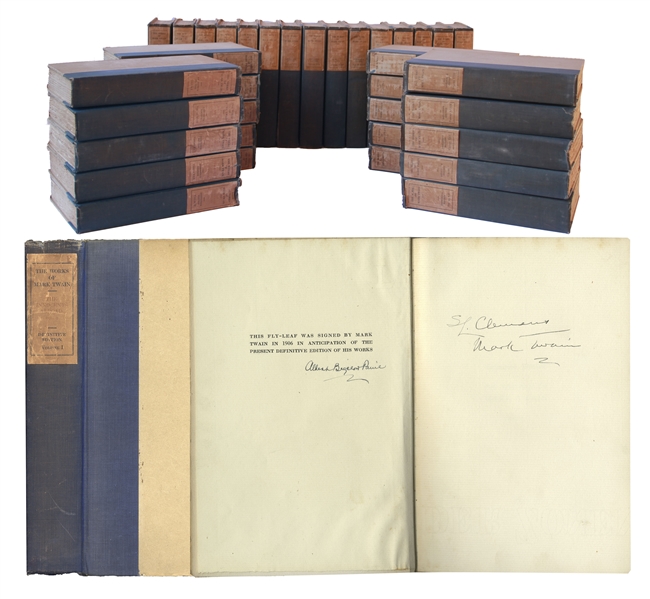 Here are some a number of Mark Twain first edition books and signed books that we have sold in that past with their prices realized:

Excellent signed copy of Mark Twain’s “Tom Sawyer,” dated 10 May 1899. Inscribed on front free endpaper: “Truly Yours Mark Twain / May 10, 1899.” London: Chatto and Windus: 1899. A later edition of the classic that became the wellspring of American literary fiction, with wood-engraved illustrations by True Williams. In this quintessentially American novel, Twain introduces Tom Sawyer and Huckleberry Finn and their mischievous adventures in antebellum Missouri. With one marginal small tear to preface, light toning and occasional staining to pages. Original blue cloth boards with gilt lettering. Spine is rubbed and frayed at head and foot with cracking hinges, some page loosening and rubbed corners. Very good overall.  Sold for $7,500. 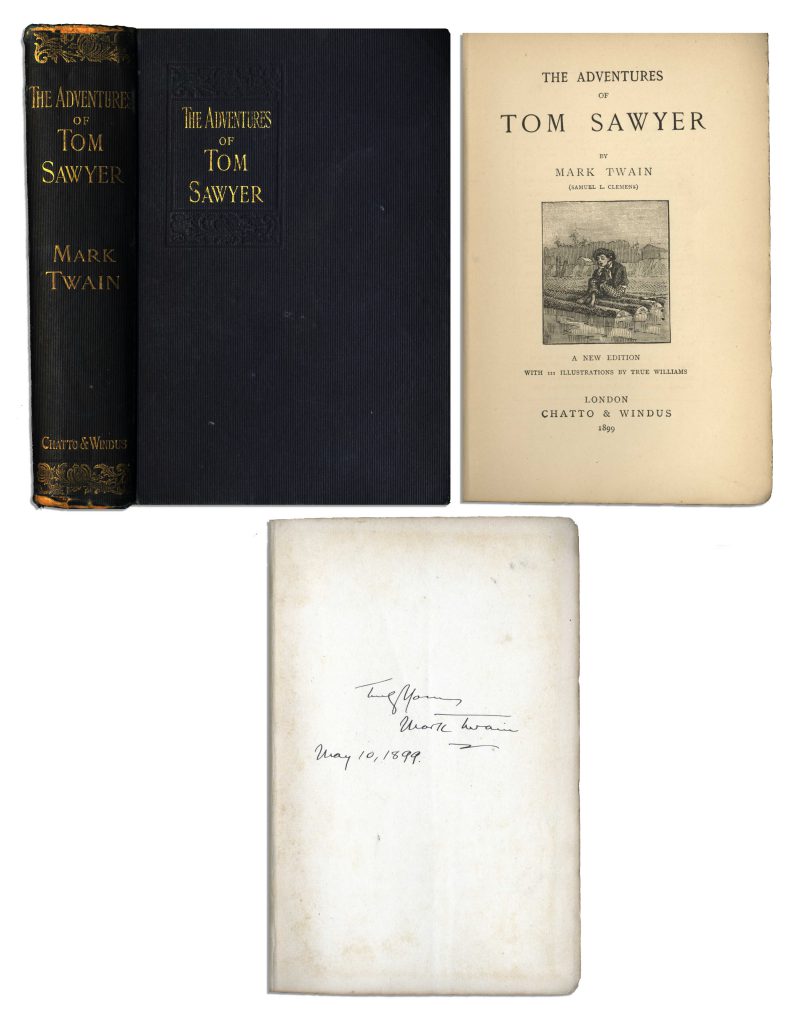 Very Scarce Mark Twain First Edition of ”Eve’s Diary” Signed — With Playful Inscription, ”Clothes make the man, but they do not improve the woman.”

Exceedingly rare Mark Twain first edition signed, first printing of ”Eve’s Diary.” London and New York: Harper and Brothers: 1906. Inscription on front pastedown reads: ”To Mrs. K.C. Tapley with compliments of The Author / Clothes make the man, but they do not improve the woman. Yours Truly, Mark Twain / Feb/08”. Twain’s inscription is a playful response to critics who condemned the ”pornographic” illustrations throughout the book, which depicted Adam and Eve in the Garden of Eden. All fifty-five pen and ink illustrations by Lester Ralph are present as are first printing points, ”Published June, 1906” on copyright page and ”London and New York” on title page. 5.5” x 8” book is in very good condition, in original red-cloth boards. Minor foxing throughout and toning to edges. Three photographs of Twain are also affixed to the book on the front free end paper and title page, the first of which is captioned, ”Died at 6:30 p.m. Thursday April 21/10 at Redding, Conn, US”. Housed in a satin-lined slipcase. Scarce signed copy of Mark Twain’s lesser known masterpiece, showcasing the author’s beloved wit.  Sold for $4,915. 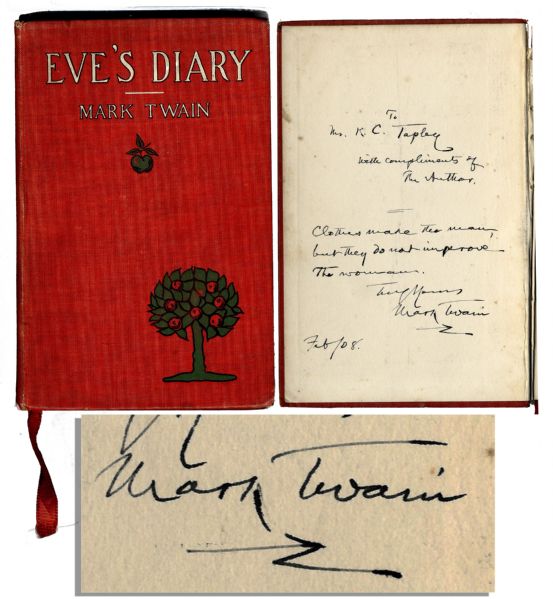 Mark Twain Autograph Note Twice-Signed — ”Always acknowledge a fault frankly. This will throw those in authority off their guard & give you opportunity to commit more…”

Samuel Clemens signs one of his pithy sayings with his given name and also with his alter ego, Mark Twain. The novelist, who is the most often quoted American writer, writes, ”Always acknowledge a fault frankly. This will throw those in authority off their guard & give you opportunity to commit more. Yours truly / Samuel L. Clemens / Mark Twain / July ’77.” Note measures 6.5” x 6.5”. Toning from previous framing, else near fine.  Sold for $4,153. 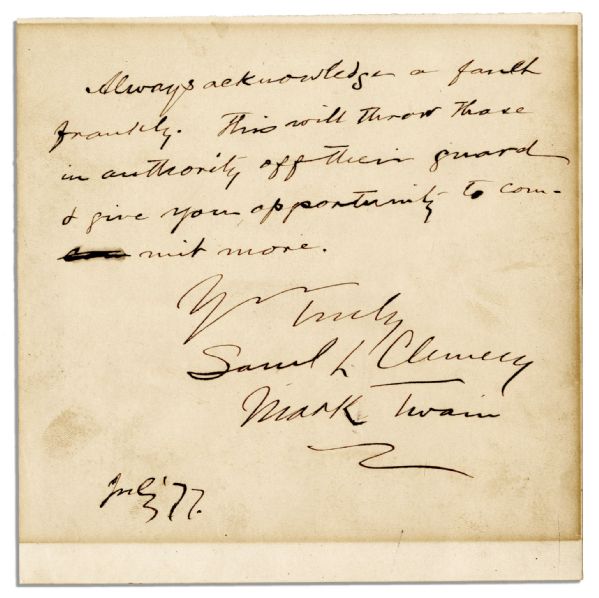 Mark Twain first edition, first printing of ”Adventures of Huckleberry Finn (Tom Sawyer’s Comrade)” with illustrations by E.W. Kimble. Charles L. Webster and Company: New York: 1885. Rare earliest edition of the beloved classic that became the wellspring of American literary fiction. Hemingway once said of it, ”All modern American literature comes from just one book by Mark Twain called ‘Huckleberry Finn.”’ All first issue points present, including: (1) title page is a cancel and has 1884 Copyright on verso; (2) heading for chapter 6 reads ”Decided”, later corrected to ”Decides”; (3) ”Him and another man” listed incorrectly at page 88 in illustrations list on page 13; (4) page 57, 11 lines from bottom, reads ”with the was” (later changed to ”saw”); (5) tablecloth under the bust of Twain at frontis is clearly visible and ”Heliotype Printing Co.” imprint is present; (6) signature mark ”11” is missing on page 161; (7) page 283 is a cancel; (8) final leaf is blank; (9) on page 143 the ”l” is missing in ”Col” and line 7 has a broken ”b”; (10) on page 155 the second ”5” appears in a different font. 366pp. book in publisher’s full green pictorial cloth, stamped and lettered in gilt and black. Measures 6.75” x 8.5”. Slight sunning to backstrip. Light rubbing to edges of board corners, spine, and hinges. A small stain appears on the front board above the ”v” in ”Adventures”. An inconsistency in the finish of the front board shows on the border of the illustration below Huck’s foot. Rear board bears a cluster of shallow dents near center and a scratch at the right. A stain is present to bottom left. Minimal toning and foxing to interior. Overall a beautiful copy in very good to near fine condition.  Sold for $3,691. 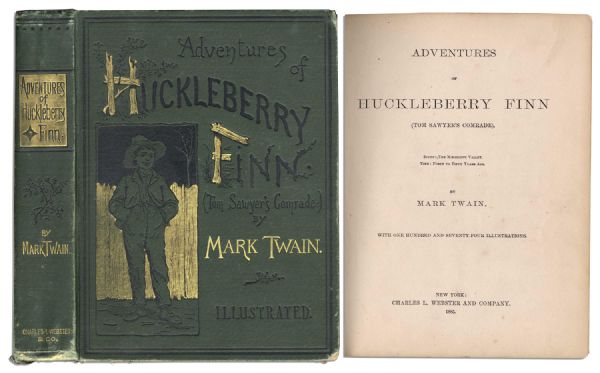 Mark Twain twice signed first edition compilation set. The American literary great signs ”Mark Twain / S. L. Clemens” to a tipped-in fly-leaf of the first volume in ”The Works of Mark Twain: Definitive Edition”, Gabriel Wells: New York: 1922. 35-volume set is No. 521 of 1,024. Twain signed leaves to be tipped-in once the set was published, as he had accurately predicted his death would precede the books’ release. Each volume is bound in beige paper boards with blue cloth spine and spine titles on printed paper, measuring approximately 5” x 8”. Original dustjackets ranging from poor to fair accompany 32 of the 35 volumes. Books are near fine given age, with only the slightest shelf wear to edges. Signed volume is bumped at the top right of the front board and has pencil notations to the front free endpaper and a tiny stain to the tipped-in leaf, else near fine. Its accompanying rare dustjacket has a detached flap and paper loss to the spine base, else near fine. A well-preserved, very desirable set.  Sold for $3,355.