Here are some sold John Hancock autograph items from our archives with description and price realized:

1843 Force Declaration of Independence from the original copper plate by William Stone, one of the earliest copies of the Declaration of Independence. In 1823, Congress authorized the production of facsimile copies of the Declaration of Independence for two reasons: the original was deteriorating rapidly and many of the aging original Signers sought copies. John Quincy Adams, then Secretary of State, oversaw the project and commissioned noted engraver William J. Stone to reproduce the document. Stone used a new Wet-Ink transfer process to create a copper plate from which facsimile copies were made. By wetting the original document, some of the original ink was transferred to the copperplate, which was then used for printing. Stone printed 201 copies on vellum, keeping one copy for himself (now residing in the Smithsonian) and distributing other copies to Thomas Jefferson, President James Monroe, members of Congress, surviving original Signers, various colleges and universities, and others. Of the original 201 copies, only 31 examples are currently known to exist, 19 of which are permanently housed in museums. In 1843, Peter Force used the original Stone copperplate to print additional copies of the Declaration of Independence on rice paper for inclusion in his book, ”American Archives”. Congress authorized up to 1,500 copies of the book to be printed, and while the actual number of copies printed is unknown, it’s generally estimated at 500. The Stone and Force copies represent an irony: certainly, they allowed additional people and institutions to obtain an identical facsimile of this most beloved of all historic American documents, but Stone’s Wet-Ink transfer process contributed to the deterioration of the original signed copy of the Declaration. The parchment did not respond well to water, with the unfortunate result being that the original Declaration of Independence, on display in our nation’s capitol, is in a rather sad state of preservation. This Force Declaration measures approximately 24.75” x 29.5” on rice paper. Folded for its original purpose of inclusion in Force’s book. A very good to near fine copy except for archival tape repairs on verso, and some creasing to front. The paper quality is very good, without as much brittleness as we usually see. A visually stunning example of one of America’s most beloved documents. Of course, the John Hancock autograph stands out. Sold for $21,963.

John Hancock autograph letter to Joseph Warren and the Committee of Safety, requesting two soldiers be appointed for command. A very important John Hancock signed autograph letter from one week after the Revolutionary War started. Dated 26 April 1775, 7.5″ x 9″, from Worcester, Massachusetts. Slight fold creases, mounted to probable acid-free board, tape stains on top, left, and right margins, not affecting text. Small tear through date.  In full, “From a Conviction of your Disposition to promote the General Good, I take the Freedom to Request your Countenance and good offices in fav. of W Edward Crafts of this place that he may be appointed to the Command of a Company. I know him well, he is capable, I Beg your attention to this, it will give great Satisfaction to Mr. [Samuel] Adams & to myself, & to the People of this Country, do gratify us. I also beg leave you will Recommend to the Notice of General Heath in my Name W. Nathel Nazro of this Town, who is serious of being Notic’d in the Army, he is lively, active, and capable. My respects to Heath & all friends. Pray Gen Heath to take Notice of this Recommendation- / God Bless you. Adieu / I am your real friend / John Hancock (signed).”  On 14 April, Massachusetts Governor Gage is secretly ordered by the British to enforce the Coercive Acts and suppress “open rebellion” among colonists by using all necessary force.  An object of some importance to the royal governor, to get possession of Mr. Hancock and Samuel Adams; and this is said to have been intended in the expedition to Concord, which led to the memorable battle of Lexington, the opening scene of the revolutionary war. Notwithstanding the secrecy with which that expedition was planned, these patriots, who were at the time members of the provincial congress at Concord, fortunately made their escape; but it was only at the moment the British troops entered the house where they lodged. Following this battle, Governor Gage issued his proclamation, offering a general pardon to all who should manifest a proper penitence for their opposition to the royal authority, excepting the above two gentlemen, whose guilt placed them beyond the reach of the royal clemency.  On Tuesday evening, 18 April, General Gage orders 700 British soldiers to Concord to destroy the colonists’ weapons depot.  Observing the movements of the British troops, Dr. Joseph Warren dispatched William Dawes, by way of Roxbury, and Paul Revere, by way of Charlestown, to give the alarm to the people dwelling on the roads toward Concord. Revere reaches Lexington about midnight and warns Sam Adams and John Hancock who are hiding out there.  Next morning, on hearing the news of the firing at Lexington, Warren left his patients in charge of his pupil and assistant, William Eustis, and rode off to the scene of action. He seems to have attended a meeting of the committee of safety that morning at the Black Horse tavern in Menotomy  (now Arlington), and there to have consulted with Gen. William Heath. By the time Lord Percy reached Menotomy on his retreat, Gen. Heath had assumed command of the militia, and the fighting there was perhaps the severest of the day. Dr. Warren kept his place near Heath, and a pin was struck from his head by a musket-ball. During the next six weeks he was indefatigable in urging on the military preparations of the New England colonies.  General William Heath performed valuable services in the pursuit of the British troops from Concord on 19 April, 1775.  At dawn on April 19 about 70 armed Massachusetts militiamen stand face to face on Lexington Green with the British advance guard. An unordered ‘shot heard around the world’ begins the American Revolution. A volley of British rifle fire followed by a charge with bayonets leaves eight Americans dead and ten wounded. The British regroup and head for the depot in Concord, destroying the colonists’ weapons and supplies. At the North Bridge in Concord, a British platoon is attacked by militiamen, with 14 casualties.   British forces then begin a long retreat from Lexington back to Boston and are harassed and shot at all along the way by farmers and rebels and suffer over 250 casualties. News of the events at Lexington and Concord spreads like wildfire throughout the Colonies.  On 23 April, the Provincial Congress in Massachusetts ordered 13,600 American soldiers to be mobilized. Colonial volunteers from all over New England assemble and head for Boston, then establish camps around the city and begin a yearlong siege of British-held Boston.  An excellent John Hancock autograph letter.  Sold for $10,745. 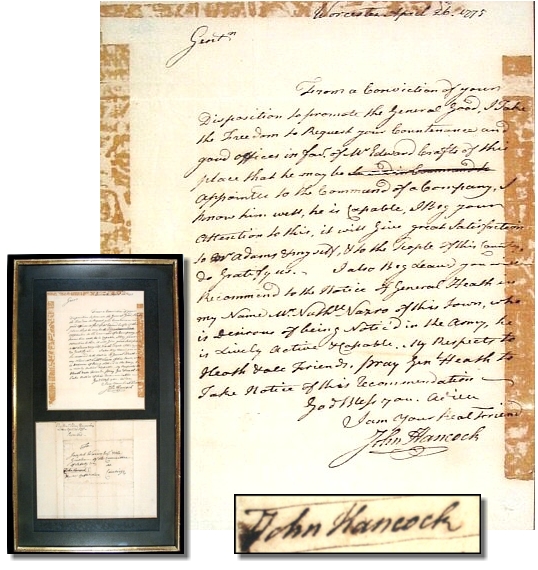 John Hancock autograph letter signed “John Hancock”, with his distinctive flourish, as President of the Continental Congress, to Major General David Wooster, Philadelphia, 11 July 177[5]. Single page, quarto, in fine condition. Written by Hancock while President of the Continental Congress at the outset of the Revolutionary War, recommending George Baylor for a military command. Hancock writes: “The Bearer Mr. Baylor…I take the Liberty to Recommend him to your Notice and Civilities, he is a Gentleman of Reputation…Any Civilities or Assistance Afforded him I shall Esteem.” General Wooster, a commander of six Connecticut regiments early in the war, took part in campaigns in Canada and New York and was mortally wounded during the Danbury Raid in 1777.  Baylor, Commander of the 3rd Continental Dragoons, was selected as an aide de camp by George Washington and was commissioned as a Lieutenant Colonel.  He received the thanks of the Continental Congress after presenting the delegates with a captured British flag obtained at the Battle of Trenton.  Bold John Hancock autograph.  Sold for $9,768. 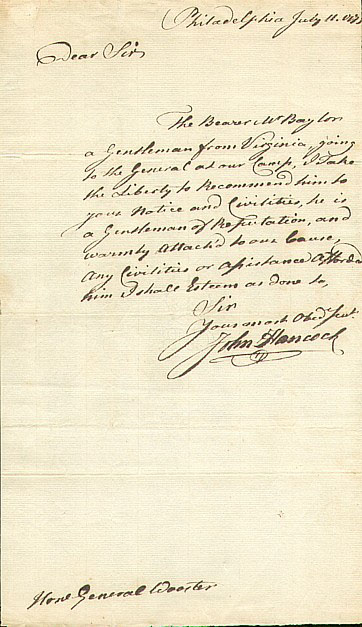 John Hancock autograph document, appointing William Eustis as “Surgeon”, dated 1 January 1776, with Hancock’s distinctive signature and paraph in bold black ink. Eustis would later serve as Secretary of War, Congressman and Massachusetts Governor. Appointment reads in part: “…The Delegates of the United Colonies of New-Hampshire, Massachusetts-Bay, Rhode-Island, Connecticut, New-York, New Jersey, Pennsylvania, the Counties of Newcastle, Kent, and Sussex on Delaware, Maryland, Virginia, North-Carolina, and South-Carolina, to William Eustis…We reposing special trust and confidence in your patriotism, valour, conduct and fidelity, DO by these present constitutes and appoint you to be Surgeon in the Regiment of Artillery Command by Colonel Henry Knox in the army of the United Colonies, raised for the defence of American Liberty, and for repelling every hostile invasion therof…” Signed “John Hancock / President”. Document measures 14.25″ x 9.5″, with light dampstaining and five small holes along folds. Dark John Hancock autograph.  Very good condition.  Sold for $9,500. 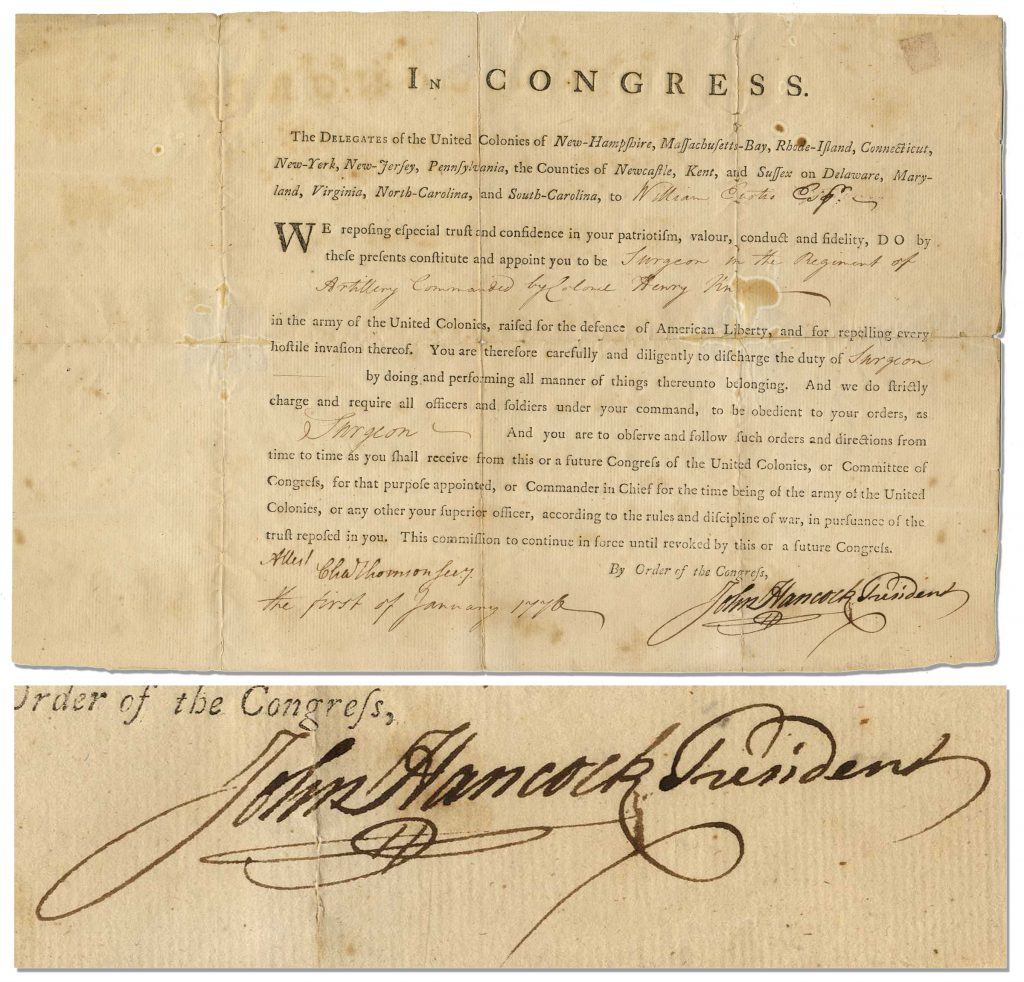 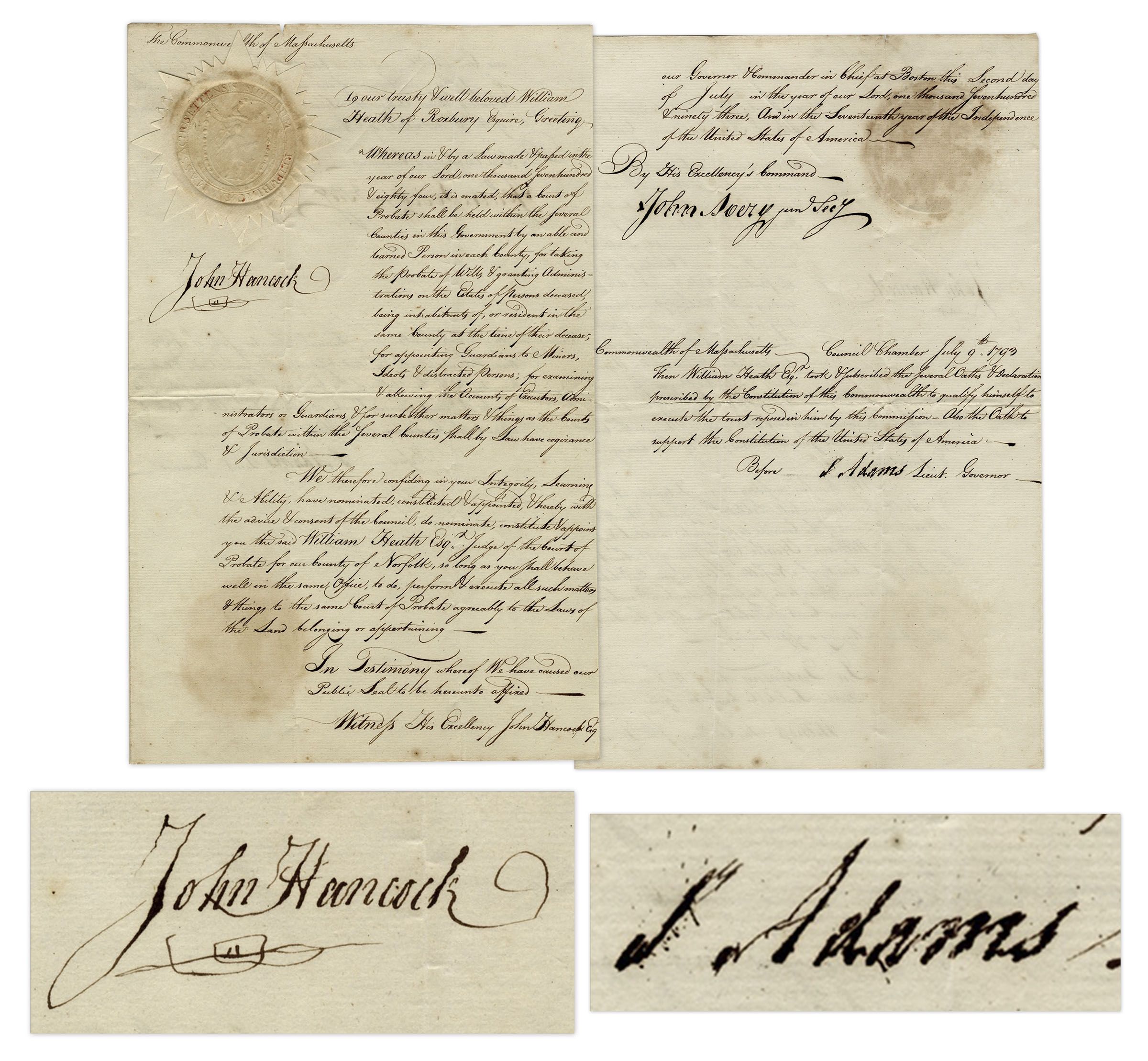 John Hancock autograph on a ship’s paper signed as First Governor of Massachusetts, dated 23 December 1784. Countersigned by Secretary John Avery and Naval Officer Tristram Jordan. Document registers the 55-ton sloop, ”The Washington,” under the command of Captain Paul Jenkins. A Massachusetts law of 1781 directed that all vessels of 20-tons or more be registered by the Commonwealth. Document, measuring 16” x 12.25” on one page, has foxing in spots, small rips and tears to edges and a significant tear from folding across center of document affecting some words, though expertly repaired on verso. Bold signature by Hancock, with his elegant paraph beneath his signature. Original blindstamped seal still intact at upper left portion of document. Archival tape repairs, toning and edge wear. Very good condition overall.  Impressive John Hancock autograph. Sold for $5,948. 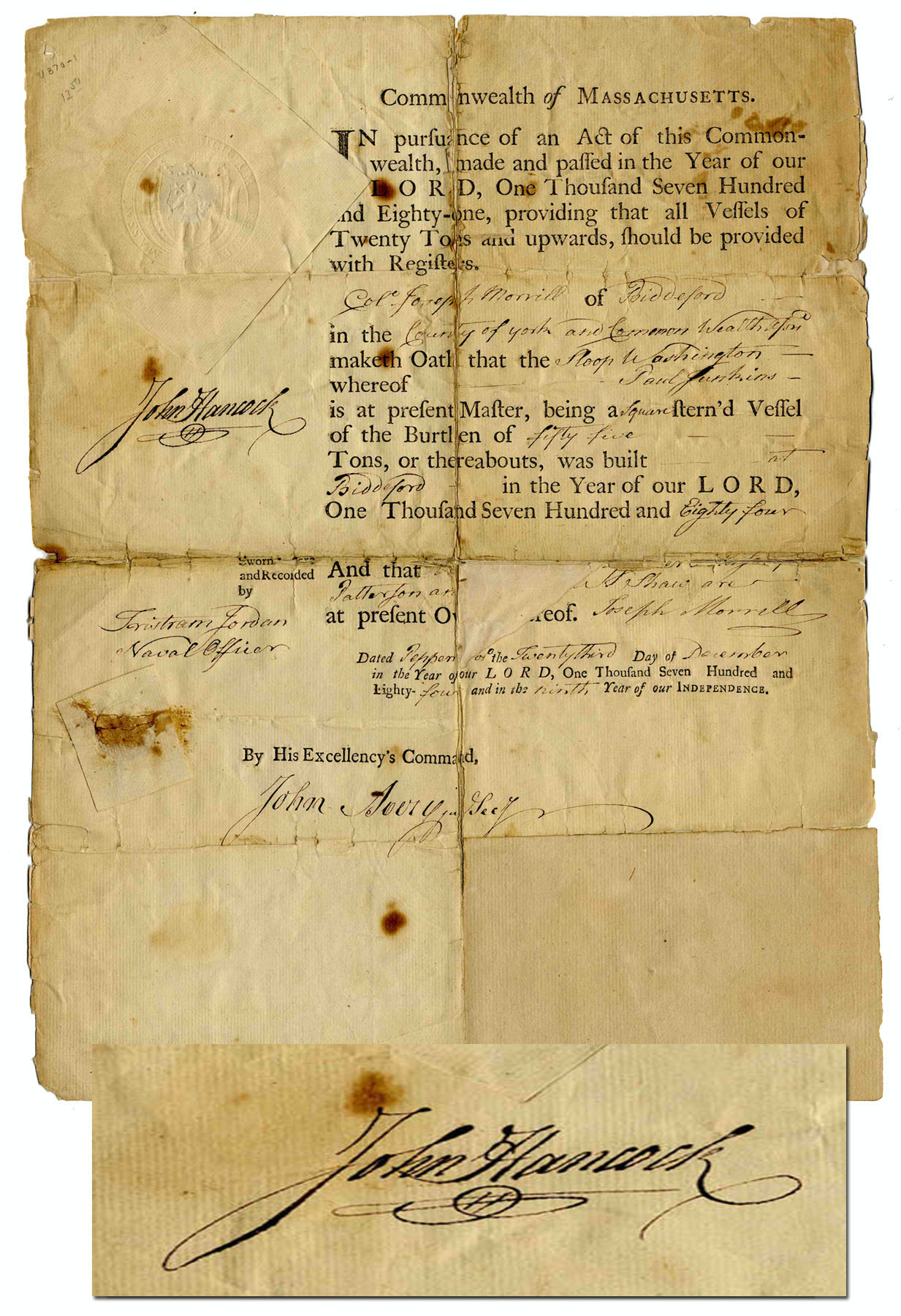 John Hancock Autograph on a Document in 1793, The Last Year of His Life — for a Bounty on Hemp

John Hancock autograph on a document as Governor of Massachusetts. The founding father signs his original ”John Hancock” for one of the last times, in Boston on 7 June 1793, just months before his death. Payment to one Mace Tisdale is ordered for a bounty on hemp in this partially-printed document. The fields are filled in by an unknown hand, and Secretary John Avery countersigns. Included in the lot is a 24 October 1794 autograph note signed by Tisdale to treasurer Thomas Davis, assigning the bounty to a David West. A red wax seal remnant is present with receipt signature to verso. Measures 7.5” x 9”. Single page document is in very good condition with toning and separation to fold. Hancock’s signature was not only the most attractive to grace the Declaration of Independence, it was the first, given his role as President of the Second Continental Congress.  Large John Hancock autograph. Sold for $5,407. 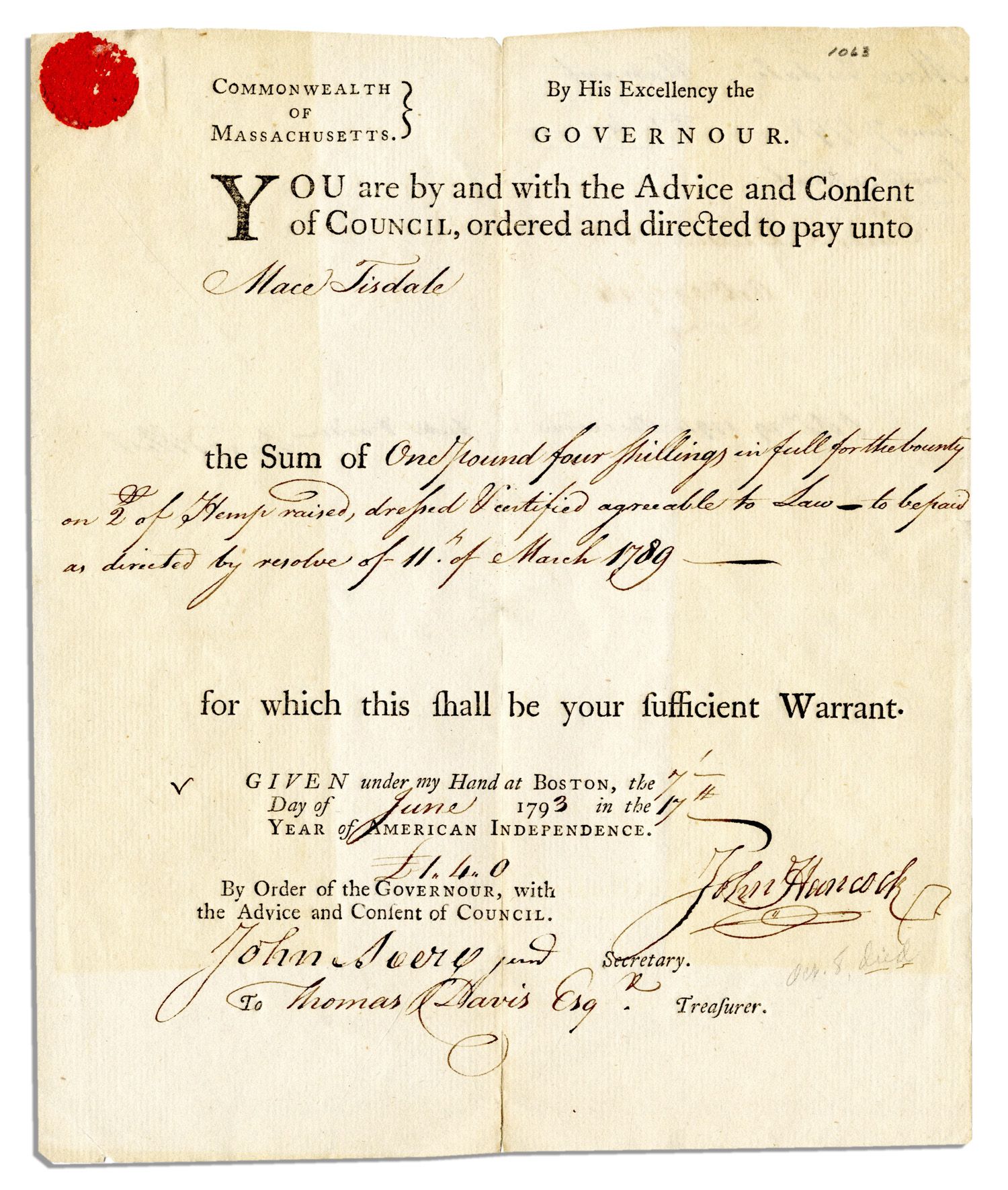 John Hancock Autograph on a Document in 1793, The Last Year of His Life — for a Bounty on Hemp.