Sell or Auction Your Alex Raymond Comic Art for up to Over $150,000 or More at Nate D. Sanders Auctions

FREE ESTIMATE. To buy, auction, sell or consign your Alex Raymond comic art that is for sale, please email your description and photos to [email protected]. Nate D. Sanders Auctions (http://www.NateDSanders.com) holds monthly auctions and can offer you a high reserve.

Your Alex Raymond art can be worth hundreds of thousands of dollars.  He is one of the most famous comic artists of all time.

Here are some illustrations of some nominal Alex Raymond comic art that we have sold:

Alex Raymond comic art signed being a “Flash Gordon” strip, hand-drawn in ink, from Sunday, 6 September 1942, syndicated by King Features. The strip is signed in the lower right corner, “Alex Raymond” with his characteristic flourishes. In this action-packed strip, Flash embraces Dale in front of Queen Desira, who feels the pangs of jealousy. After swimming with Flash, Dale and Dr. Zarkov to escape giant termites, she experiences a different kind of magnetism. Raymond drew his science fiction adventure from 1934-43. This panel belonged to Jim Raymond, his brother, also a cartoonist, who worked on Blondie. Strip is drawn on 20″ x 15″ artist’s board and matted to an overall size of 20.5″ x 17.25″. Light overall toning and small area of foxing near King Features label, else near fine. Lot includes a Fall 1956 issue of “The Cartoonist,” featuring an obituary of Alex Raymond, who died in an auto accident on 6 September 1956, 14 years to the day after the date of this strip. A spectacular representation of Alex Raymond comic art.  Sold for $13,546.50. 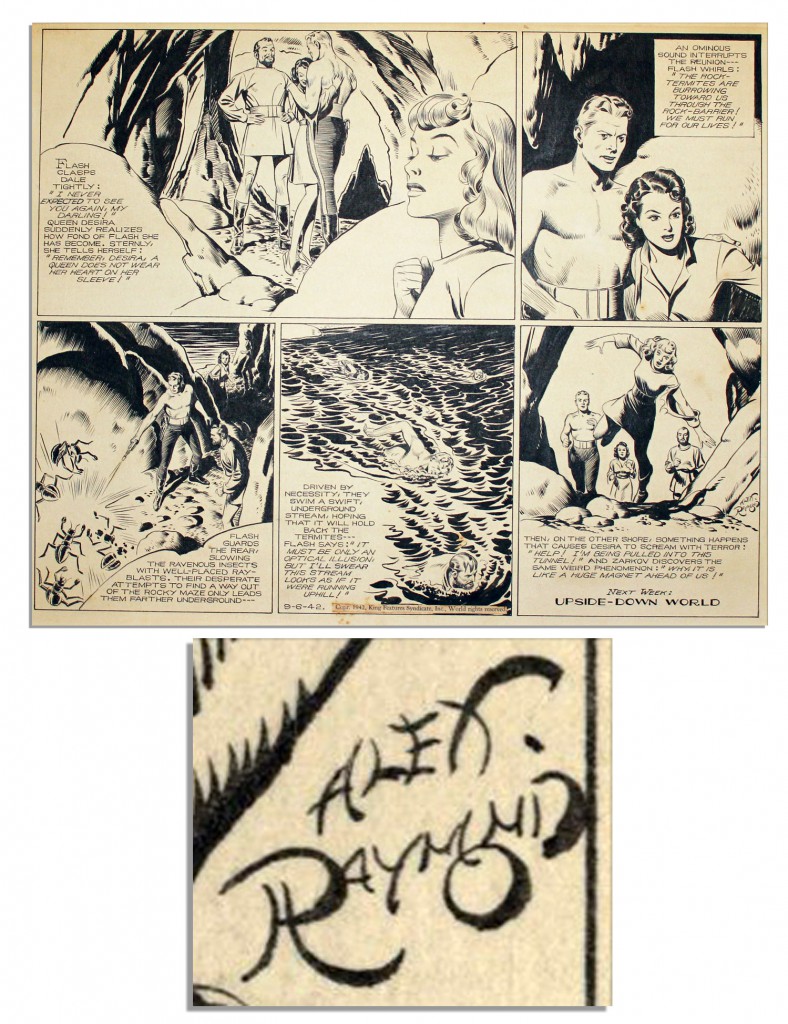 Alex Raymond comic art signed including a “Flash Gordon” frame, hand-drawn in ink. This is the third panel from the 4 June 1939, “Flash Gordon” Sunday strip syndicated by King Features. Verso is dated June 1939. The great comic strip artist inscribes, “To Faith Farmer from her friend and former neighbor Alex Raymond” to the lower right corner. His bold, clear signature is attractively stylized. A caption beneath the image reads, “THEY DANGLE OVER THE FIERY CHASM AS THE GUARD RAISES THE DRAWBRIDGE.” Raymond draws his popular hero Flash Gordon and heroine Queen Fria clinging to the drawbridge for dear life in this quintessential example of Raymond’s work, whose comic strips have been and continue to be the gold standard in pulp fiction. Page glued to frame board measures approximately 8″ x 9.75″. Some toning and small areas of discoloration, particularly on Flash’s arm, else very good. Another spectacular representation of Alex Raymond comic art. Sold for $7,530. 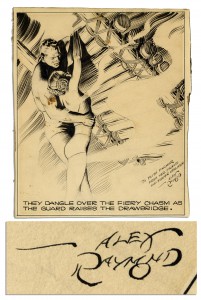 We have also even sold an Alex Raymond signed photo!

Cartoonist Alex Raymond 7.5″ x 9.5″ signed photo with him in a suit sketching. Raymond stylistically inscribes in bold black ink, “To My Friend Percy Forster / Alex Raymond May 3, ’38.” Sepia-toned photo is matted to a size of 11″ x 13.25″. Photo has light scattered scratching, else near fine.  Sold for $1,025.

Here are some other classic comic strips we have sold:

One of the greatest pieces of artwork by Hal Foster in his career, the original artwork for the 120th ”Prince Valiant” Sunday comic strip from 28 May 1939. In this instantly recognizable piece — featured on the cover of Fantagraphics’ ”Prince Valiant Vol. 2: 1939-1940” and in numerous ”Prince Valiant” publications — Val sees the foreboding castle of Andelkrag in person, surrounded by Huns as they prepare to attack it. The six panel strip measures 26” x 34.5”, (the large Andelkrag panel measures 17” x 21” by itself), with incredible detail showing the seemingly impregnable fortress, the mountains behind it, the flames roiling up aside it and Prince Valiant standing upon a hillside, gazing at its beauty and enormity. In this strip, Val makes his approach and plunges into the river moat at darkness, to find a fire-raft built by the Huns in order to destroy Andelkrag’s bridge. As Prince Valiant destroys their handiwork, the Huns vow revenge in return. Artwork is signed by Foster on the second panel, inscribed to ”Edward W. Larson / with friendly greetings / Hal Foster”. With King Features Syndicate, Inc. label on fifth panel, with 1939 copyright. The date of 28 May 1939 appears on the fourth panel, along with ”120”, the number of this Prince Valiant strip in the life of the series. Artwork is mounted to board and matted to a size of 33” x 41.5”, with matting strips separating the panels. With minute amount of soiling, artwork is in near fine condition. Accompanied by the color newsprint of this artwork and two ”Prince Valiant” books featuring this strip. Sold for $70,461. 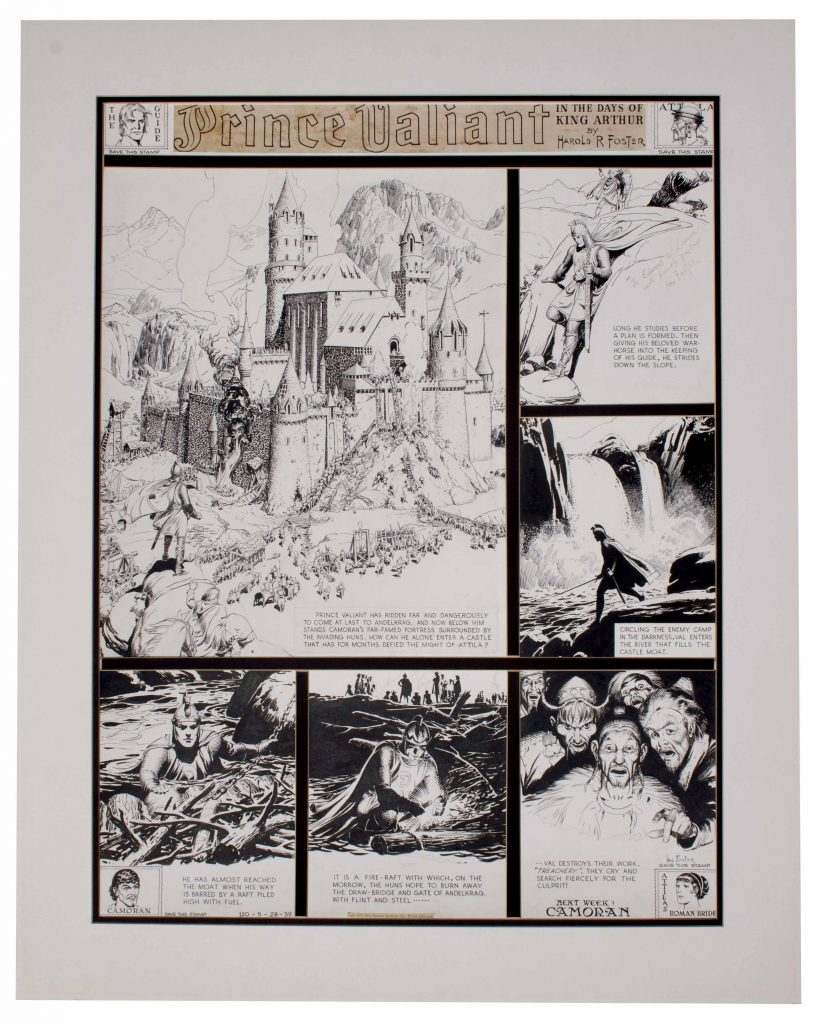 Charles Schulz Original Hand-Drawn ”Peanuts” Comic Strip — In This Strip From 1957, Schulz Draws the Score From Beethoven’s Piano Sonata No. 1 to Call in Snoopy, Who Trots in on 4 Feet

Special ”Peanuts” original comic strip, hand-drawn by Charles Schulz for publication on 16 December 1957. Strip is one of the rare examples of Schulz meticulously recreating a musical score by Beethoven, in this case Piano Sonata No. 1. Schroeder whistles the Sonata to call in Snoopy for dinner, who trots in on four legs rather than two, a hallmark of the early ”Peanuts” strips. With United Feature Syndicate label on first panel, strip measures 29” x 7”. Mild toning, overall very good to near fine condition. Sold for $58,954.

Original Sunday ”Peanuts” comic strip, hand-drawn by Charles Schulz. In this ”April showers” themed strip, published 26 April 1970, Snoopy, Woodstock and Peppermint Patty get caught in a downpour, but then little Woodstock is further harassed by a flowing rain gutter. Strip measures 24” x 17”, inscribed by Schulz to Jim Pearson. Near fine condition. Sold for $56,250. 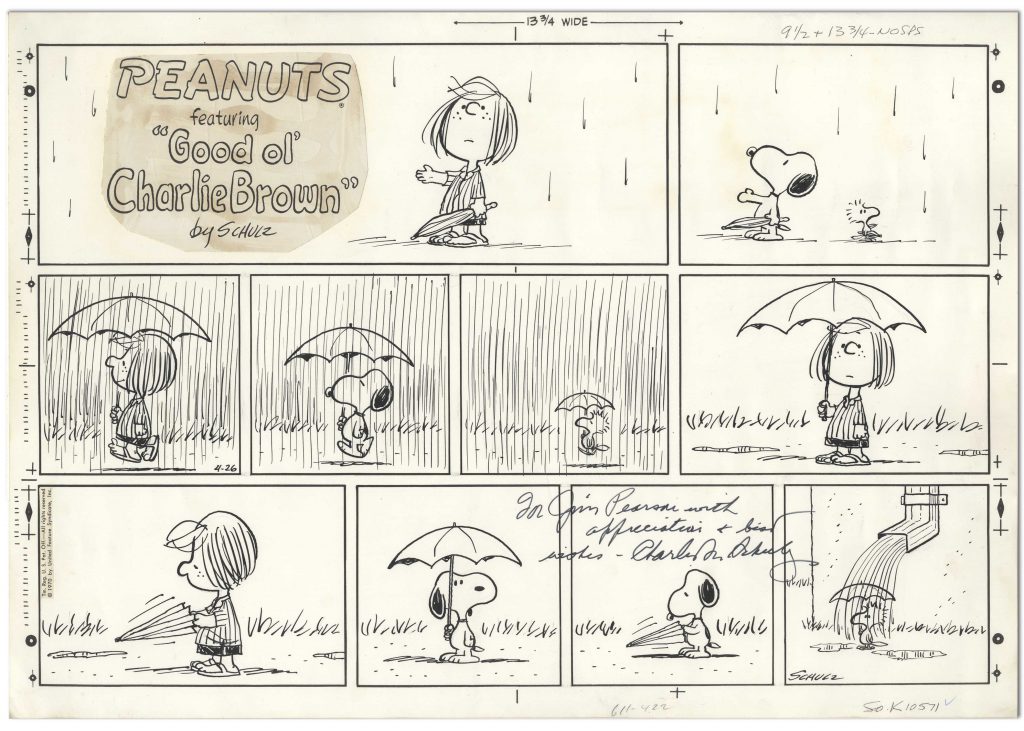 Original ”Prince Valiant in the Days of King Arthur” strip in two parts, dated 6 Mach 1937, the 4th strip in the series which launched on 13 February 1937. In this large 12-panel strip, we witness Prince Valiant grow from a boy – stranded on the Fens Marshes – to a young man who hunts and provides food for the exiles. His teacher is a young native boy who shows him how to hunt and also escape death by the ”marsh lizard”, the superbly drawn creature which preys upon the young men in the last half of the strip. Hal Foster additionally draws an image of Prince Valiant’s face on the back of the strip, and inscribes the first portion of the strip in pencil above the panels, ”To Douglas Newton with best wishes for his success as an artist / Hal Foster” and then additionally, ”I send you this early one because it has a dragon in it – hope you can clean it up”. The 1937 King Features Syndicate label appears on the 11th panel, along with the date of 6 March. A publisher’s sticker also appears under the 10th panel. First portion of strip measures 29” x 21” and second portion measures approximately 29” x 20.25” with an irregular top edge. Strip is in good condition with some dampstaining that mostly appears on the margins and can be framed out. Strip also has some foxing, toning and tape remnants to margin. Artwork itself is still bold and clean. First panel is a cut-out portion taped to the strip on the verso, ostensibly a change to the strip by Foster before publication. An excellent, very early example of Hal Foster’s classic Prince Valiant. Sold for $44,291.

”Krazy Kat” large Sunday comic strip, dated 7 November 1943. Created by cartoonist George Herriman, Krazy Kat depicts the unlikely love triangle of a cat, a mouse and a dog: Krazy Kat, Ignatz Mouse and Officer Bull Pupp. Krazy Kat’s naive, unrequited love for Ignatz is consistently and unceremoniously rewarded by bricks hurled to the back of his head, thrown by the cantankerous mouse. Officer Bull Pupp does his best to protect Krazy Kat, whom he not so secretly loves, from Ignatz’ relentless brick attacks. True to form, this hand-drawn 1943 Sunday strip features Officer Bull Pupp’s unsuccessful attempt to shield Krazy Kat from an inevitable brick attack at the hands of Ignatz. With a distinctly Southwestern visual style, Krazy Kat has long been a favorite of comic fans and such notables as E.E. Cummings, William Randolph Hearst, Jack Kerouac and Pablo Picasso. Strip measures 16.5” by 25”. Mounted to board but in otherwise remarkably near fine condition with only a hint of toning. From the estate of ”Blondie” creator Chic Young. Sold for $22,878. 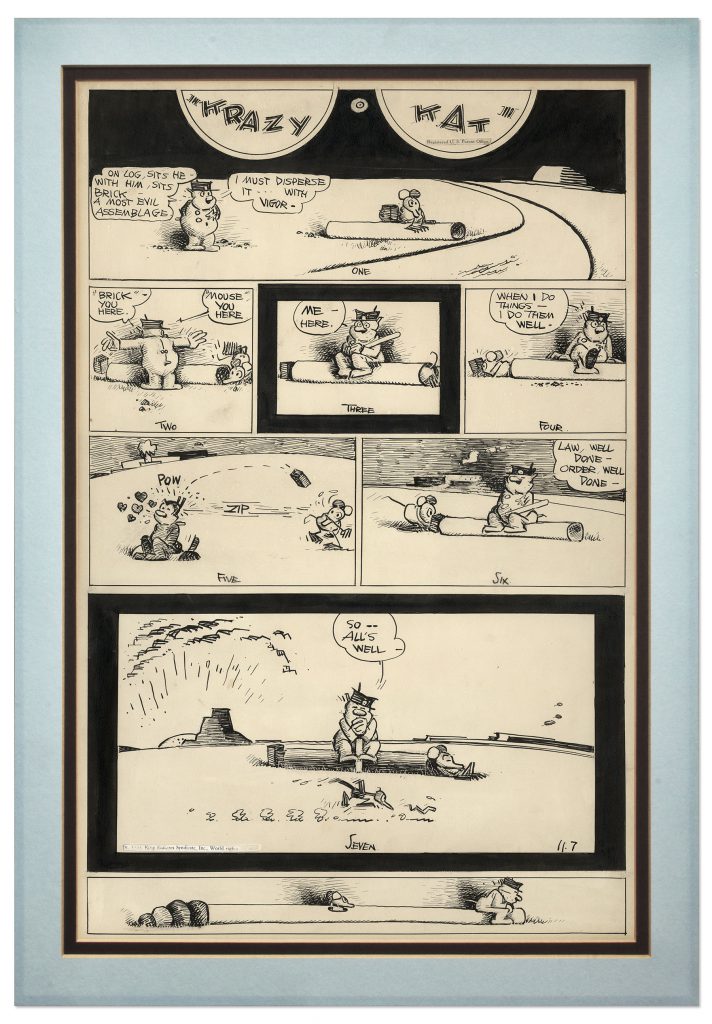 FREE ESTIMATE. To buy, auction, sell or consign your Alex Raymond comic art that is for sale, please email your description and photos to [email protected]. Nate D. Sanders Auctions (http://www.NateDSanders.com) holds monthly auctions and can offer you a high reserve.SaveSave