The Best Civil War Diary Auction is at NateDSanders.com

Here at the Nate D. Sanders Civil War diary auction, we specialize in selling interesting and unique Civil War letters and soldier diaries, especially those with battle content. Representing a glimpse into a fascinating era, we have been able to achieve high prices realized for items penned by Civil War soldiers. 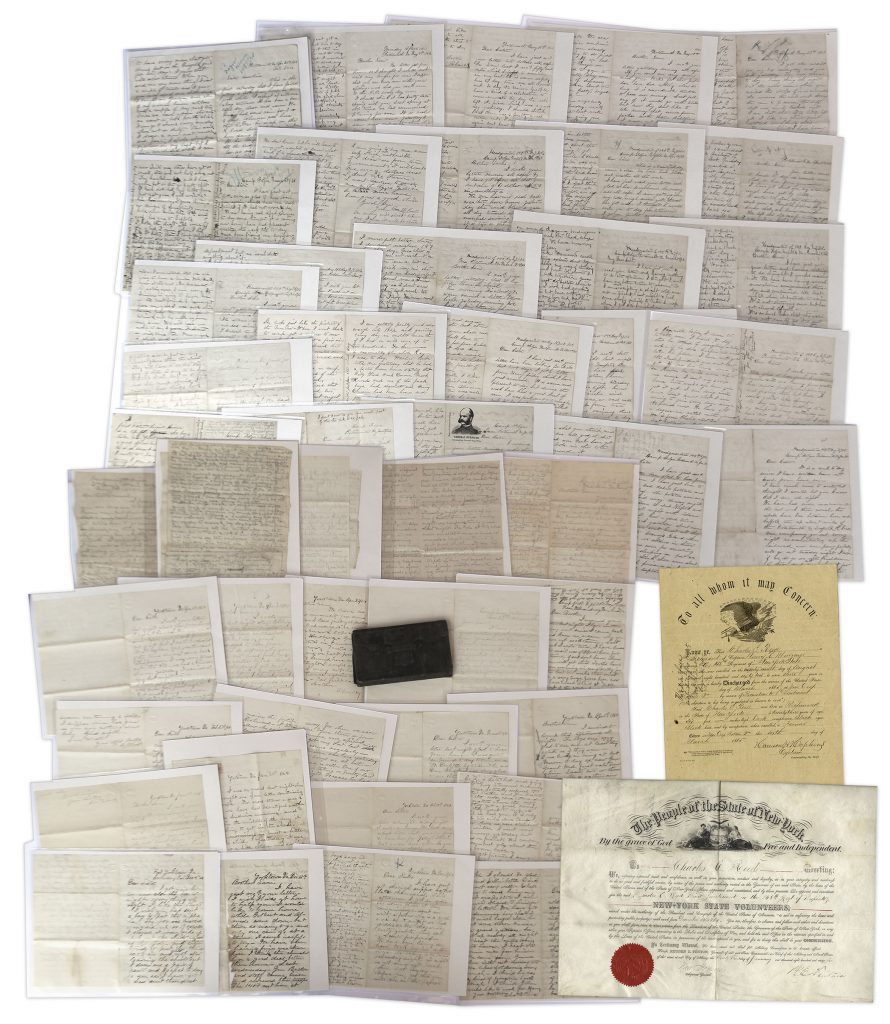 Extracts include “…a dead Rebel lay on the ground, one we had killed Friday or Saturday. It looked pretty rough, his face was black as my boot, flies all over his face…” & “…lost 62 killed and wounded…Capt. Griswold is severely wounded in the shoulder, knocked the bone all to pieces, has had the socket bone taken out…” & “…Our loss since we came here in killed and wounded is about 180 or 190. We have not half the men we started with…” & “…all at once the Rebs opened on us…Shells burst all about us and we had to retreat across an open field they had complete command of…” & “…they were met by a perfect shower of bullets…I expected to be hit but felt cool throughout…” & “…a charge was made. We gained the Fort. A little later in the morning the niggers made a charge. They behaved very badly. They not only retreated, but was a regular stampede…” & “…The Rebels made two terrific assaults on our lines and were repulsed with a great slaughter both times…” & “…You ought to see the dead Rebels in front to our lines, they are piled right up. They are worse than ours were at Cold Harbor and Petersburg…” 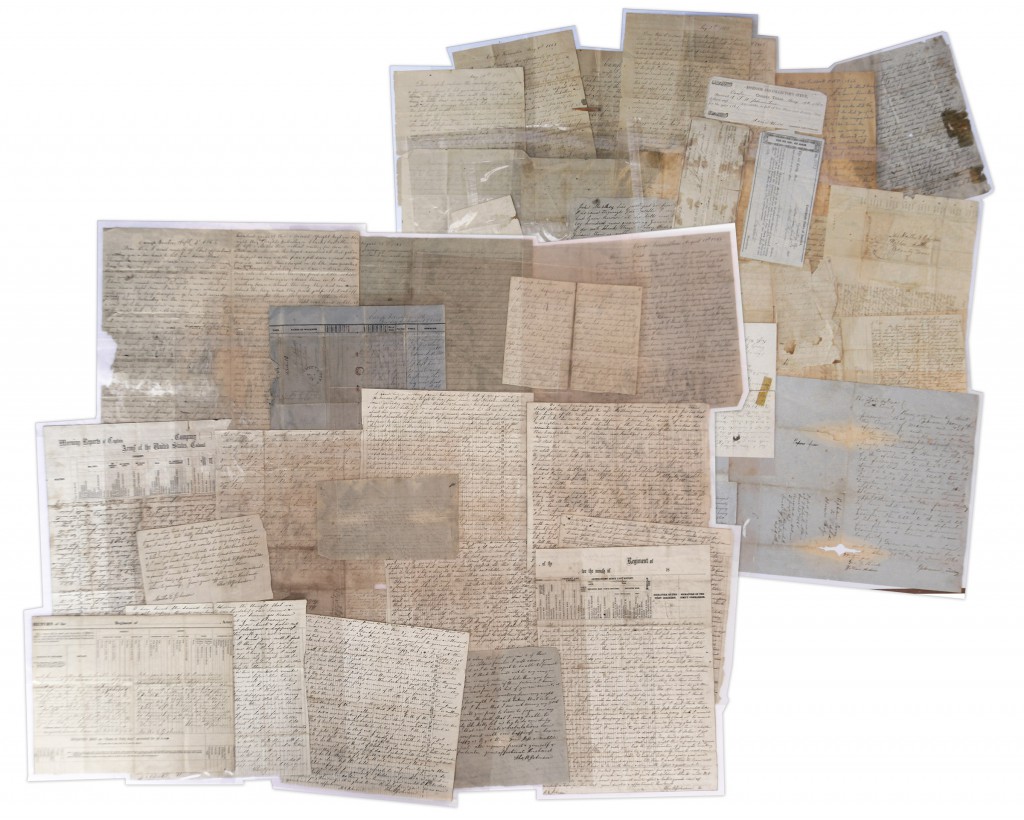 It came with content from the Battles of Stirling’s Plantation, Mansura, Vidalia, Harrisonburg, Fort DeRussy & Bayou de Glaise. Excerpts include “…it was the intention for our forces to go on & conceal ourselves until they were attacked…we went on & found them camped in some negro quarters…There were about 22 killed & about one hundred wounded…We had to charge through open ground on the negro houses…” & “…the grape & shell fell thick around us…the enemy rolled in to the river so we had to fight them here with field artillery & small arms. They shelled us for about three hours during that time we fought them as we could get position…We had three men killed & some fifteen wounded several of them having died since & 3 or 4 houses burned…” & “…our Division was let out on the prairie in time of battle to support the batteries which then were pouring it into them in a line of a mile in length & them at us. They continued the fight with Artillery for three hours until their infantry began to advance on us…they out numbered us largely…Our men held the battle grounds & buried their dead but they had the best of the fight…”

We, at one of our past Civil War diary auction, also sold an excellent Civil War archive from Jerome Bottomly of the 1st Engineer Battalion, Co. C, with 47 war-dated letters, two war diaries, a tintype of Bottomly in uniform and his GAR uniform and medals for $15,000. 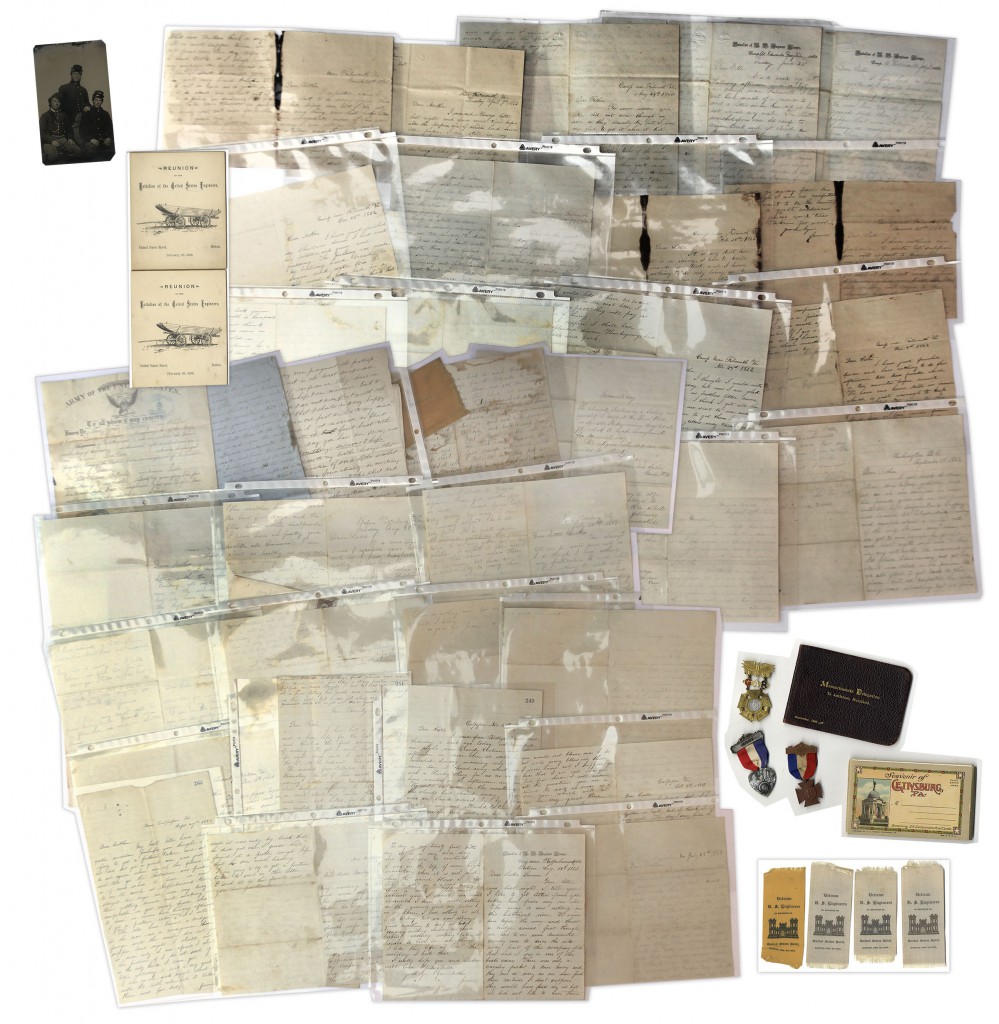 Bottomly, an Artificer in the Engineer’s, saw almost constant battle during his enlistment, including Antietam, Savage’s Station, 1st and 2nd Fredericksburg and continual skirmishing along the Rappahannock, where they bridged the River six times. 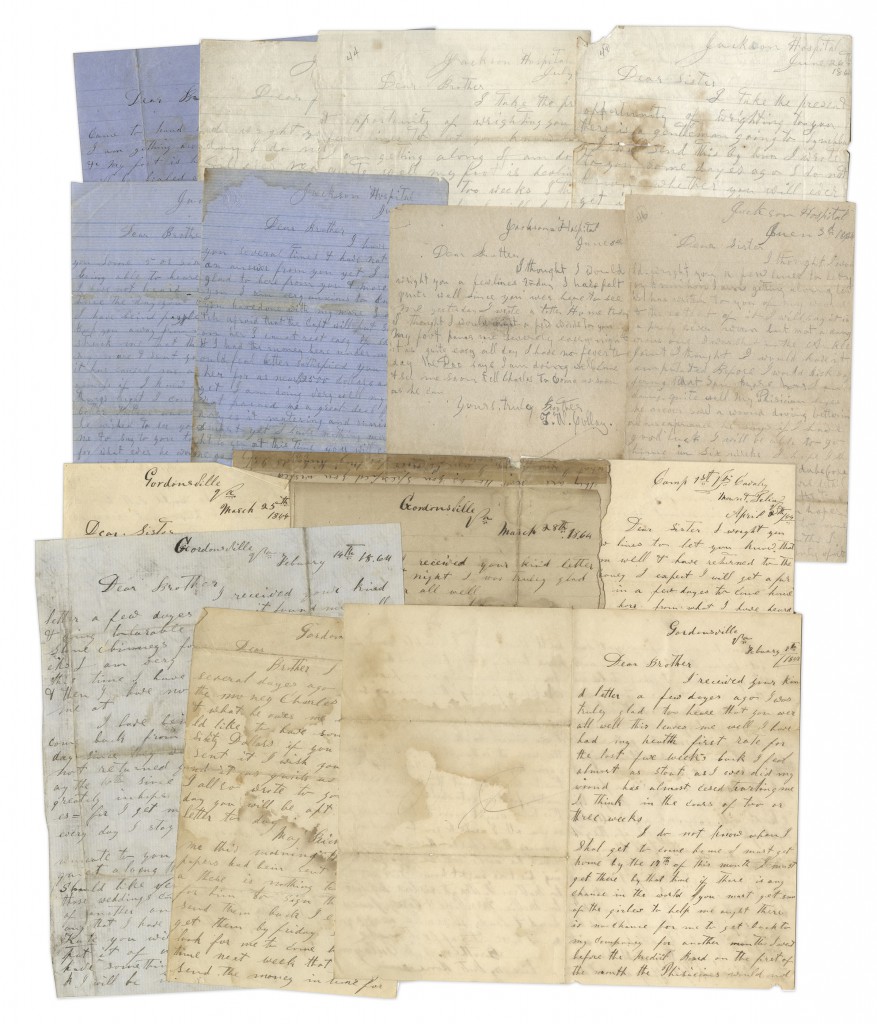 Thomas W. Colley was wounded four times during the war, including losing a finger and being shot. It wasn’t until the Battle of Hawes’ Shop in May 1864 that Colley was discharged for wounds, after having his foot amputated. Until then, he was engaged in dozens of battles, many of which he writes about here, including Cold Harbor, Gaines’ Mill, Antietam, Manassas, Seven Pines and Dranesville.

“…Our loss was 160 killed, wounded and missing…They outnumbered us 5 to one. We got all our dead and wounded the next morning…” & “…we came up with the enemy at Cole Harbour abought 3 o’clock Thursday 26th, when the fight commenced and has lasted 5 dayes with very little cesation…” & “…I went in the great fight at Sharpsburg with the 2nd South Carolina Regt. I experanced some pretty hard fighting in that battle…” 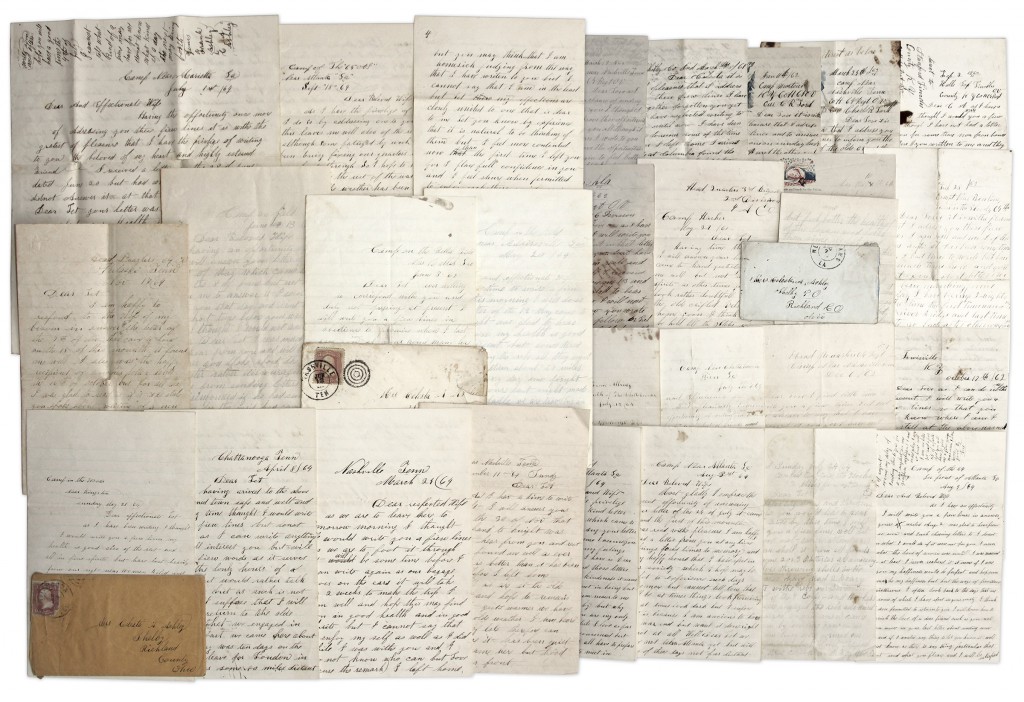 True to form, Ashley writes of numerous battles — mostly during the Siege of Atlanta — in these letters home to his wife, which run from 1861-65 and span the Battle of Perryville in October 1862 to fighting in Atlanta in August 1864, with much exciting content in between. 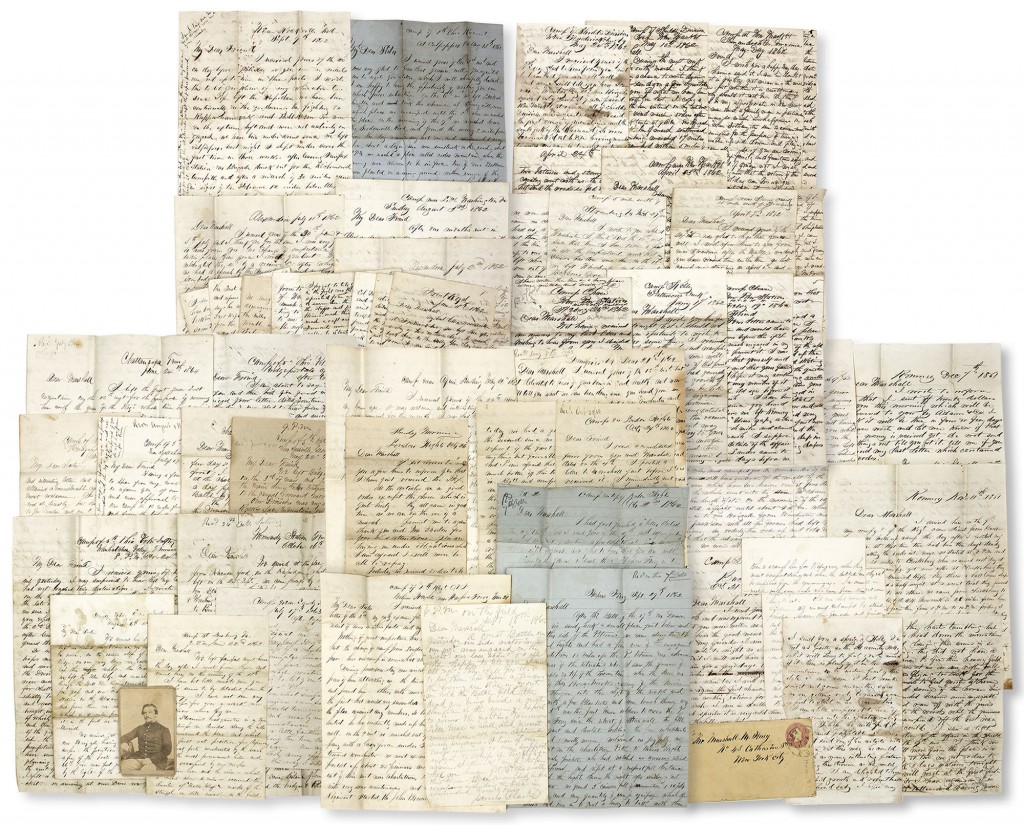 At this Civil War diary auction, the lot included a diary-style letter from the month of May 1862. Addressed mostly to his brother, Clarke writes engaging and riveting stories, with details on battles and skirmishes fought by the 5th Ohio in almost every letter.

This collection of 45 letters from Private Edward Stacy of the 36th Massachusetts Infantry sold for $9300. 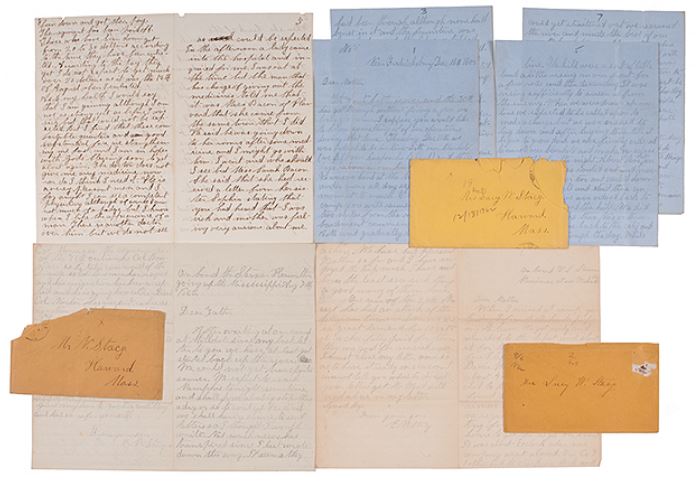 Mustered in 1862, Stacy was killed in action in May of 1864 during the battle of Wilderness. Two letters specifically discuss Fredericksburg, the second running 8pp. long, dated 18 December 1862. It reads in part: “The bombardment commence at about 6 o’clock AM and gradually increased till about 11 o’clock. At that time the cannonading was the heaviest. Our lieutenant counted 35 discharges of the cannon in half a minute…I looked round in the city some of the lower end where we were. There was scarcely a house but had one or more shells through them and in the majority of them a family would hardly escaped alive. I went into one very nice large house that several shells had been through although none had burst in it and the furniture was knocked round the library tipped over and the books all sprawled round. The soldiers were allowed to roam over the city and take just what they wanted. If I had had my knapsack I or any place to carry them I might have got some nice books. But I supposed we were going into a fight and I did not want to load myself down with plunder…”

We sold this Francis Parker Civil War Archive for $9300. 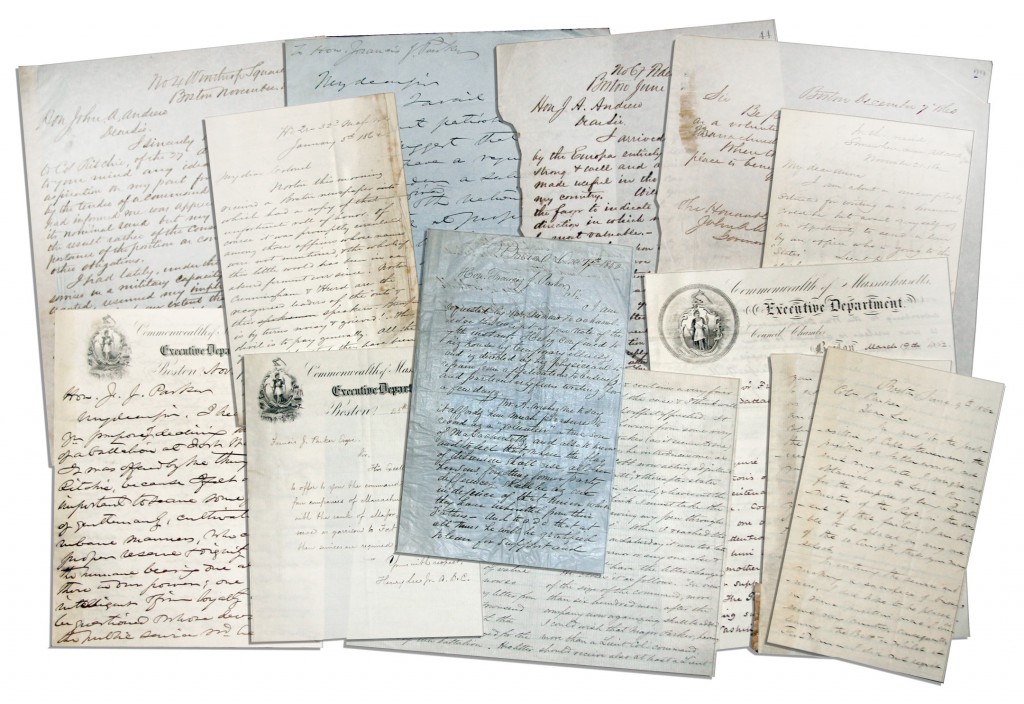 An expansive collection of 38 Civil War letters, 18 of the letters were written to Colonel Francis Jewett Parker of the 32nd Massachusetts Infantry, and 20 were written by Parker himself, a very articulate chronicler of the war. A wealthy Bostonian, Parker mustered into the 32nd Massachusetts Infantry on 9 December 1861 becoming the first colonel of the regiment, which was part of Fox’s 300 Fighting Regiments. Correspondence dates from 7 December 1860 to 21 November 1862 with some of the earlier letters being a back-and-forth between Parker and Governor Andrew regarding his military ranking. At first, Parker declined an appointment he deemed beneath him though by late 1861, eager to fight, Parker apparently swallowed his pride and accepted a battalion with Major’s rank. 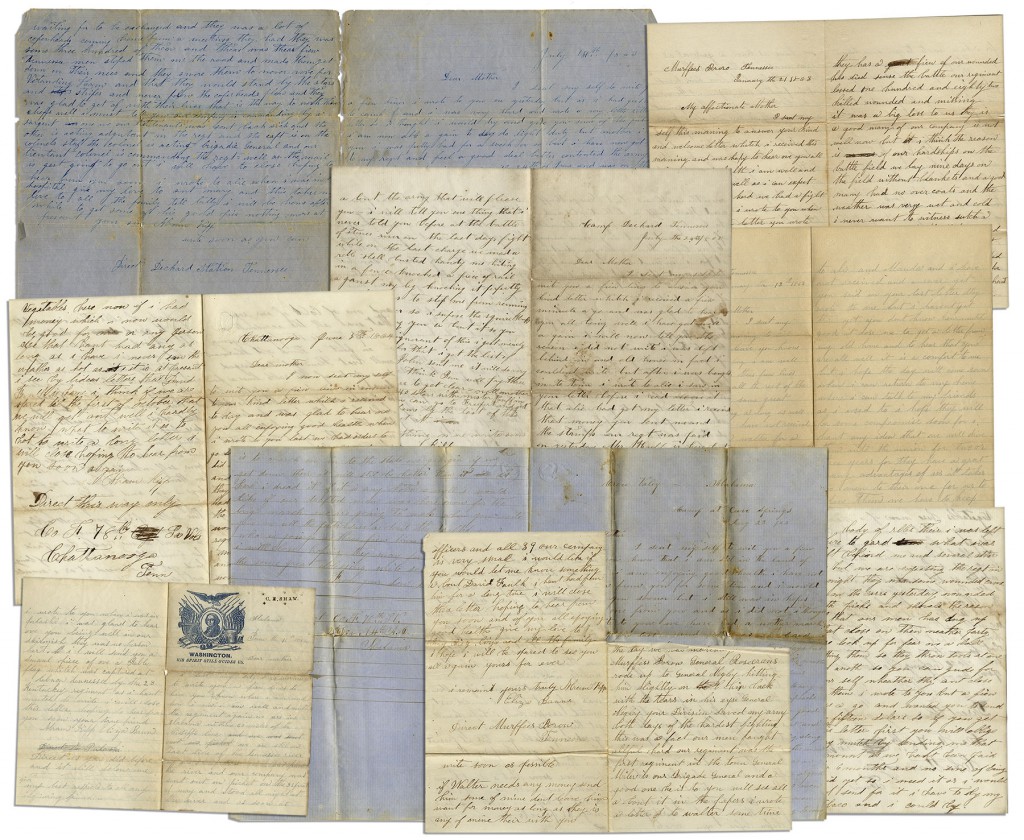 The extensive lot of 75 Civil War autograph letters were signed by Abram E. Kipp of the 78th Pennsylvania Infantry, Co. F. The letters were addressed to Kipp’s mother Eliza Bawn, save for two addressed to his sister. Kipp begins writing home from Louisville, Kentucky and writes through his engagement in the battle for Atlanta, encompassing his participation in Stone River, Chickamauga, Lookout Mountain and Missionary Ridge. “…My partner was shot dead by my side…fired on every man we saw…” & “…There was a guerilla band attacked us on the way…” 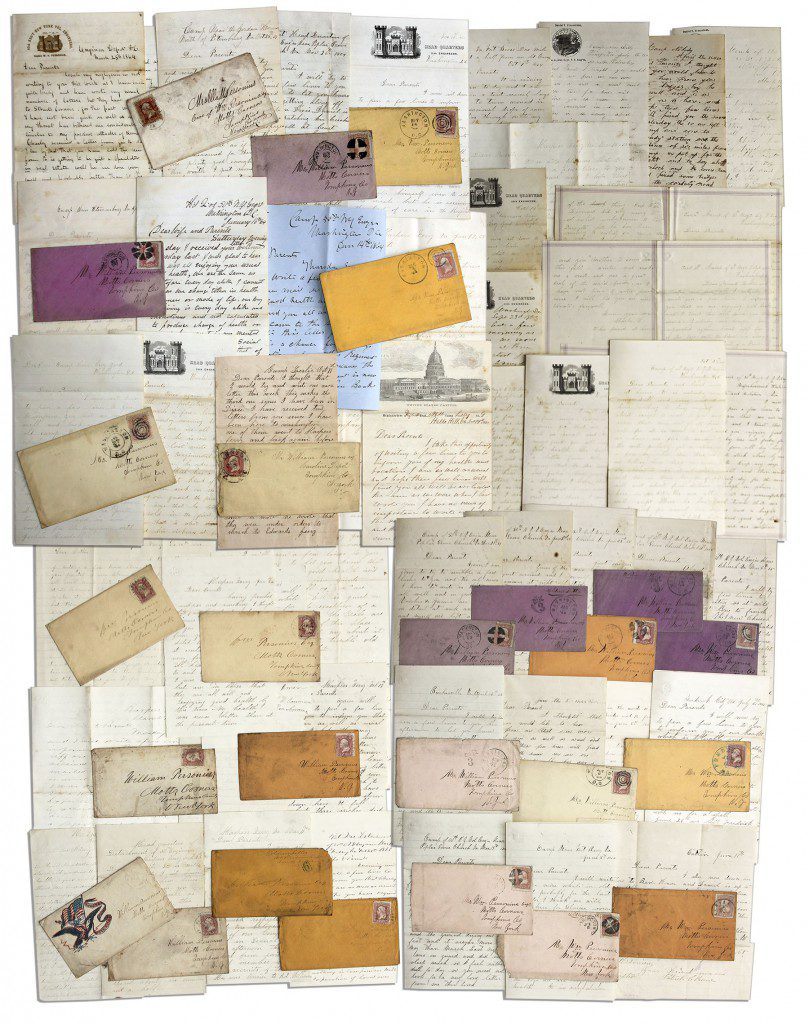 The archive of 76 Civil War letters were written by three brothers in the 50th New York Engineers: Captain Walker V. Personius and Privates Charles W. and Daniel V. Personius, all in Co. G. “… take no prisoners meaning by this they kill every single one they have a chance to…When the order was given them to charge, one of their orderlies shouted out in clear distinct tone, ‘Boys, remember Fort Pillow’…Revenge is strong with them…”