The Michael Jackson Thriller Auction has begun.  Nate D. Sanders Auctions will be selling the contract Michael Jackson signed for his iconic “Thriller” video in its February auction. The music video is so famous, it is the only music video that is in the National Film Registry at the Library of Congress, which recognizes the most important films of all time. The video is more short film than music video, clocking in at 13 1/2 minutes long, and featuring some of the most classic dance moves ever. In case you forgot or just want to have some fun, take a look:

A documentary of the video as well as the video itself was packaged and sold as a VHS tape, selling 9 million copies, which is an unfathomable amount for a music video.

Currently up for auction is the contract associated with the video, a security agreement that Jackson’s Optimum Productions undertook with the Screen Actors Guild. The contract includes a copyright agreement from the U.S. copyright office, verifying its authenticity. 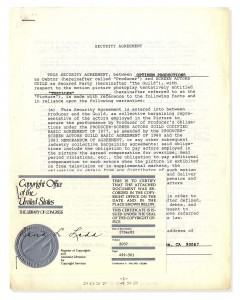 Jackson signs the back of the contract with a huge flourish, signing in red pen. 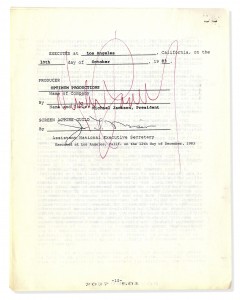 If you have any Michael Jackson worn or signed memorabilia, or any other music memorabilia please contact Nate@natedsanders.com. We offer great rates for consignments, and our monthly auction model allows you to put them up for sale in 30 days or less.