We just wanted to let you all know that we felt very privileged to have the opportunity to auction off the infamous Grammy that grunge rock group Pearl Jam won in 1996, the only Grammy award the band ever won at our past Grammy auction. Grammy awards are very scarce and highly sought after, so we were certainly not shocked that a Grammy would sell for over fifty thousand dollars, but this one has a very unique story behind it. In line with iconoclasts in every industry who eschew awards, it seems as if their rejection of the ultimate honor only makes us value it even more. This piece of Rock and Roll memorabilia from the heyday of grunge music is notable for being the only Grammy the group has ever won, and if you watch the below video it’s not shocking as to why. In an awkward moment, frontman Eddie Vedder steps on stage and tells the audience he was there to just “watch the show and relax”. He pauses awkwardly, then utters one of his most famous statements stating, “I don’t know what this means. I don’t think it means anything”.

Suffice it to say, I don’t think Vedder’s bold statement gained him a lot of admirers at the National Academy of Recording Arts and Sciences. The group was at its peak when they won this award, with their first two album releases “Ten” and “Vs.”, going platinum thirteen and seven times respectively. When the band released their third album “Vitalogy” on November 22, 1994, it became the second-fastest selling album of all time, trailing only their previous release “Vs.” They were quite simply the most popular band of the mid-nineties, perhaps even more popular than Nirvana, at least in terms of record sales. Even though the album came out in 1994, it actually qualified for the 1995 award show, which was subsequently held on February 28, 1996, so perhaps the band felt it a bit silly that their reception of the award came so long after the initial release of the album.  The statue we sold was one of five, with each band member receiving an award. It’s not shocking that one of the statues ended up going up for bidding, as clearly the award was not a treasured item for any member of the band. It certainly must have “meant something” to a number of Pearl Jam fans, as we received ten bids on the item, and it eventually sold for a healthy $52,226 at our Grammy auction. 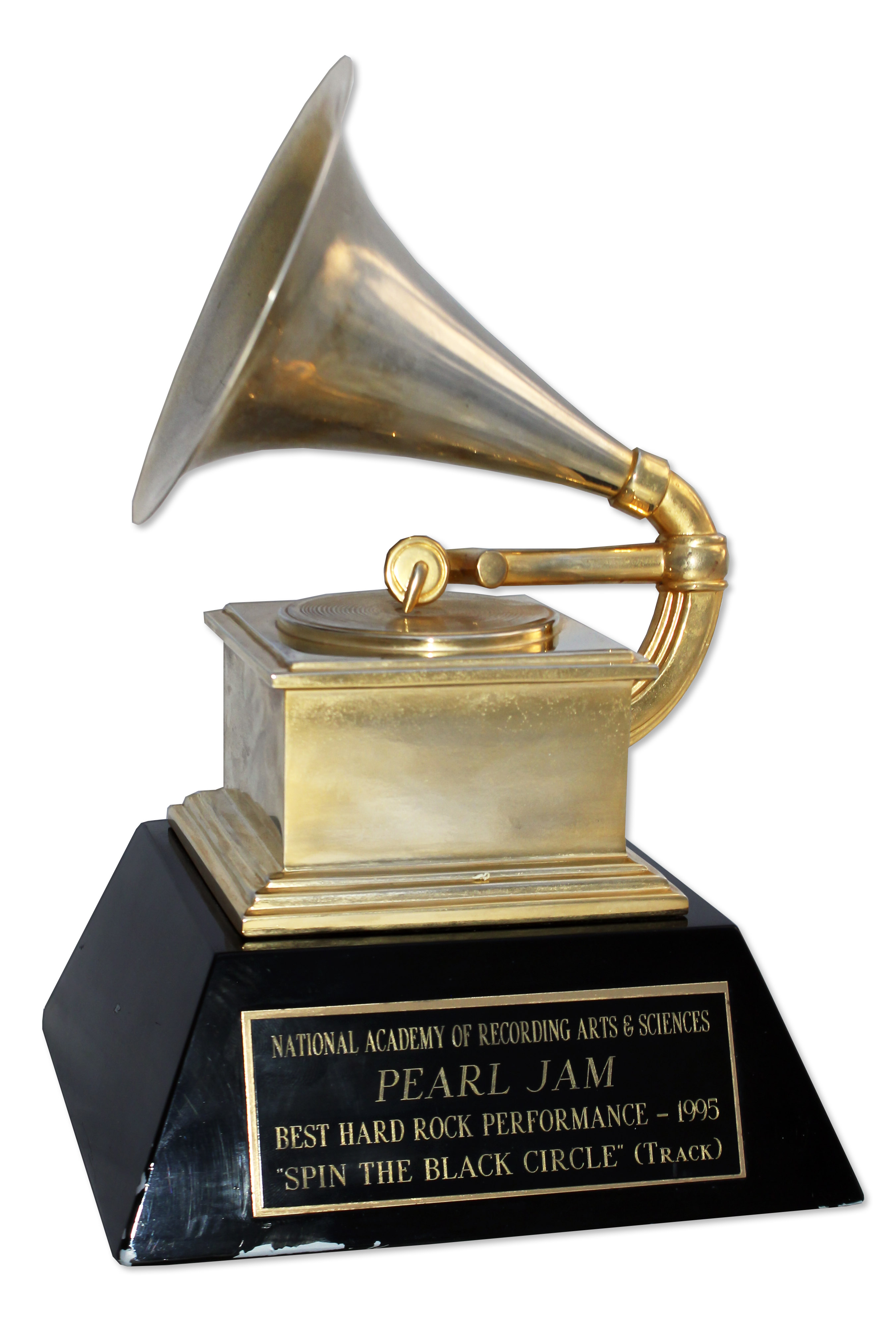 (May 2015 Grammy Auction) Grammy award won at the very first Grammy Award ceremony, won by The Champs for the song “Tequila”. Established by the National Academy of Recording Arts & Sciences, the first Grammy award ceremony was held on 4 March 1959, awarding just 28 Grammys for musical achievements in the year of 1958. Written and performed by The Champs, “Tequila” reached number one on the billboard charts in early 1958, and its legacy in pop culture is still felt today. The song has been re-recorded in countless forms, by legendary musicians such as Dizzy Gillespie and Wes Montgomery. Award is a gold-plated metal representation of a gramophone affixed to a wooden base, with a plaque reading “National Academy of Recording Arts & Sciences / 1958 / Presented to / Dave Burgess & The Champs / Tequila.” Also included is the original nomination certificate presented to The Champs, as well as a program from the ceremony signed by Champs guitarist Dave Burgess. Grammy award measures 4.75″ x 4.75″ x 6.5″. Plaque measures 8.5″ x 10.5″ and folded program measures 11″ x 14.5″. Moderate wear to wooden base and slight separation of gold gramophone from base but which remains attached as issued. Horn is a separate piece that screws onto trophy, and is attached, but has a stripped and partially broken thread. Light wear to certificate and light creasing and tears to edges of program. Very good to near fine overall. With an LOA from award winner Dave Burgess.  This might be the best Grammy auction item ever.  Sold for $62,500. 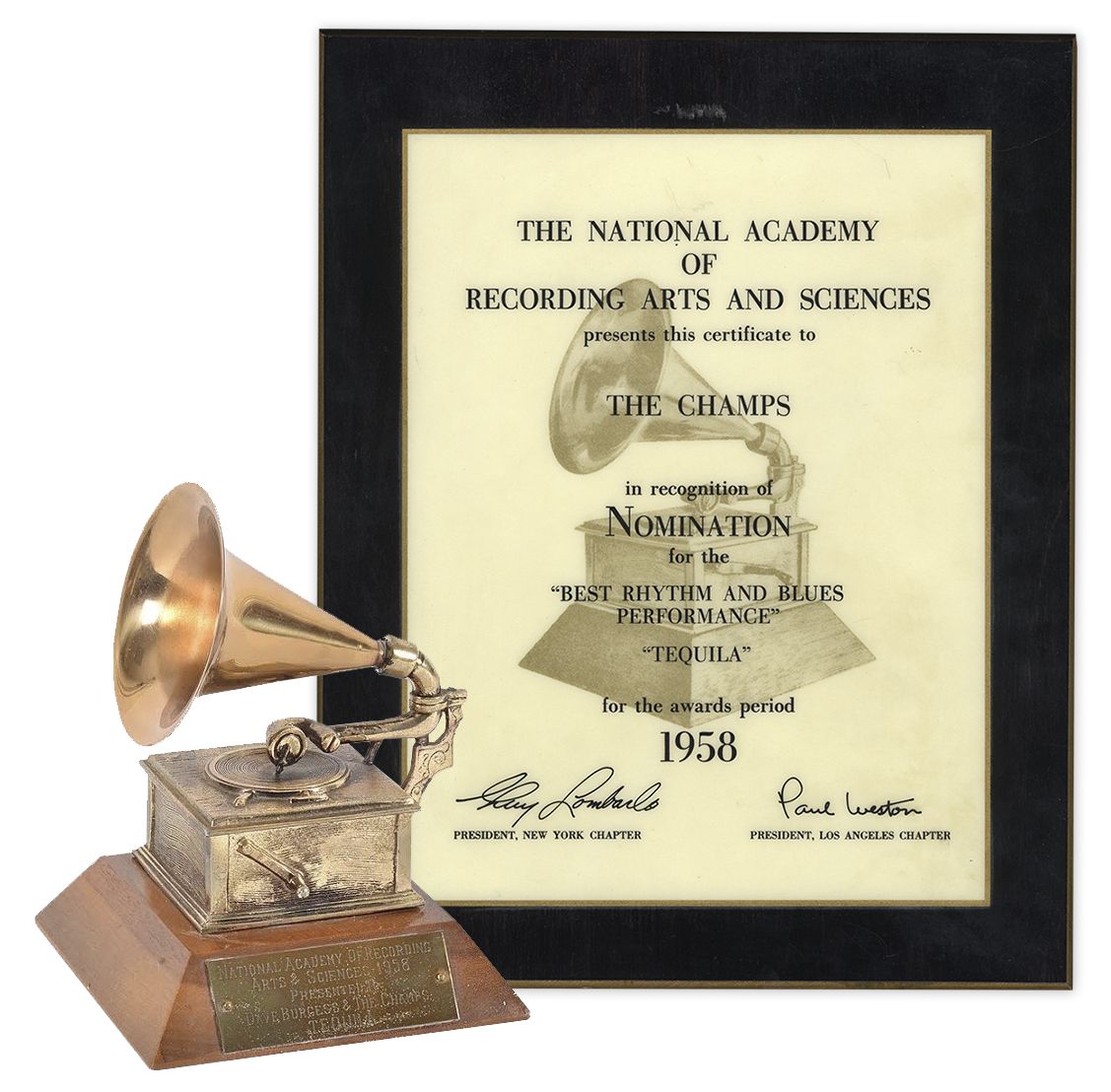 (April 2014 Grammy Auction) Original Grammy Lifetime Achievement Award bestowed on ”The Who” in 2001. The British band, consisting of Roger Daltrey, Pete Townshend, John Entwistle and Keith Moon, came to define rock and roll music of the 1960s and 70s, with countless number one hits, including 17 top ten albums and various other awards for iconic songs of the era like ”My Generation”, ”Tommy” and ”Baba O’Riley”. The band also became known for their dramatic, theatrical performances that culminated in the ritual smashing of instruments. The band was bestowed this high honor in 2001 and recipients of this award, according to the National Academy of Recording Arts and Sciences, ”have made creative contributions of outstanding artistic significance.” Fellow Lifetime Achievement honorees that year included The Beach Boys, Tony Bennett, Bob Marley and Sammy Davis, Jr. Crystal award made by Tiffany & Co. features the iconic Grammy phonograph image. Measures 5” x 9.5”. Minor scuffing, else near fine.  From one of our early Grammy auction events.  Sold for $24,063. 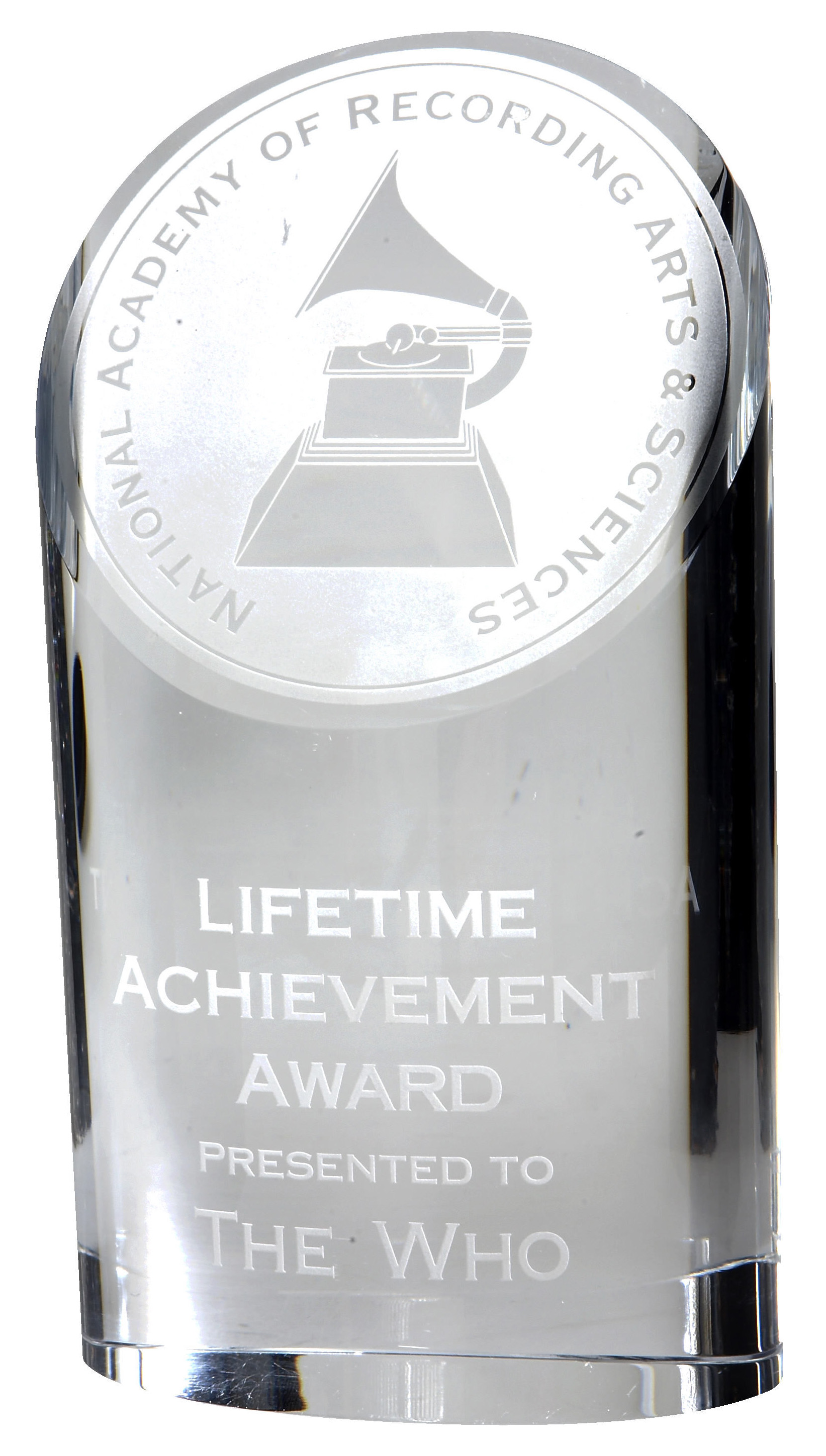 Sammy Davis, Jr. Grammy Award for ”Lifetime Achievement”. The National Academy of Motion Picture Arts & Sciences bestowed this weighty honor on the performer in 2001. Sammy Davis, Jr. earned the moniker ”Mr. Show Business” for his talent in all aspects of performing, from singing and dancing to acting and comedy across every medium: Broadway, television and film. Recipients of this high award, according to the NARAS, ”have made creative contributions of outstanding artistic significance.” Davis was twice Grammy-nominated previously for his songs ”Candy Man” and ”What Kind of Fool Am I,” but this, along with his Grammy Hall of Fame award, are the sole Grammy awards that Davis received. His fellow Lifetime Achievement honorees that year included The Beach Boys, Tony Bennett, Bob Marley and The Who. Crystal award made by Tiffany & Co. features the iconic Grammy phonograph image. Measures approximately 9.5” in height. Near fine.  From our December 2012 Grammy Auction.  Sold for $15,786. 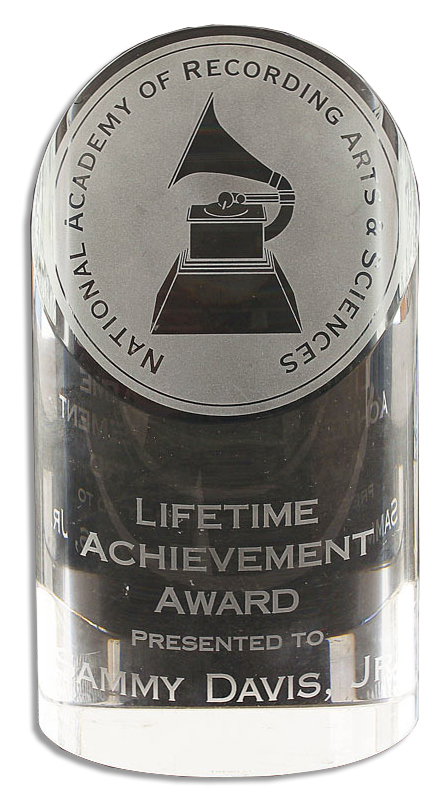