Ray Bradbury forever changed the landscape of science fiction, his words and images permeating readers’ imaginations to this day.

Besides being an incredible writer, he was a collector of illustration art, original drawings, Disney cels, comic strips and much more.

We are proud to be auctioning 400+ items from the Ray Bradbury Estate at the end of September.

“I have fun with ideas; I play with them,” the author once whimsically said of his writing style and outlook as an artist. “ I’m not a serious person, and I don’t like serious people. I don’t see myself as a philosopher. That’s awfully boring.”

Bradbury was a self-described autodidact and spent his childhood in libraries, foregoing college instead following his own curiosity in his intellectual pursuits.

This June 2012 New Yorker essay by Bradbury nicely paints a picture of the artist as a young man, a young boy in fact, wild in his imagination:

“…I memorized all of ‘John Carter’ and ‘Tarzan,’ and sat on my grandparents’ front lawn repeating the stories to anyone who would sit and listen. I would go out to that lawn on summer nights and reach up to the red light of Mars and say, ‘Take me home!’ I yearned to fly away and land there in the strange dusts that blew over dead-sea bottoms toward the ancient cities…”

The dystopian novel “Farenheit 451”, originally published in 1953 is considered an American classic, still taught in classrooms across the country.

He brought science fiction into the literary mainstream, de-mystifying its genre-specific stigma. He made science fiction accessible — 8 million copies of his books have been sold in 36 languages.

This short interview shows the author talking off-the-cuff about writing regularly. As you can see, his walls were covered with art.

The paintings featured below were once hung on the walls of his house, or provided inspiration as he wrote each day. Many of the painters of these works were friends with the author over the years, collaborating in various art shows, or for original art for the covers of his books. 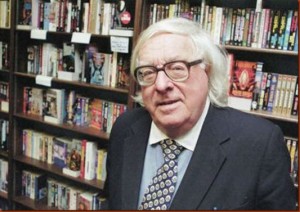 Here’s a rundown of featured items in the upcoming auction: 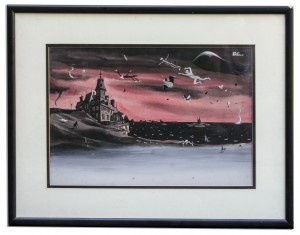 “Addams Family” cartoonist and creator Charles Addams original 1946 painting personally owned by Ray Bradbury. True to Addams’ whimsical and macabre tone, painting depicts a landscape scene at twilight with a Gothic mansion overlooking a shore, and with ghoulish creatures and spirits ascending towards the house. Signed, “Chas Adams” at upper right. Mixed media on illustration board was selected to be the cover image for Bradbury’s book, “From the Dust Returned”, which was released in 2001. Painting measures 17″ x 12″ and is matted and framed to an overall size of 24″ x 19″ with a chip to frame. Else near fine. 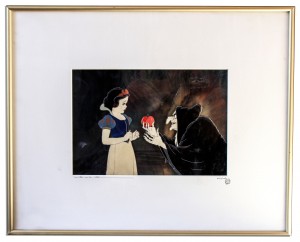 Original animation cel from Disney’s 1937 classic ”Snow White and the Seven Dwarfs” featuring the most famous moment in the film, the Queen in her old hag disguise handing Snow White the famed poisoned apple. Snow White is portrayed in her iconic gown and with a red bow in her hair, innocently looking at the bright red apple. With “Snow White and the Witch” handwritten in cursive pencil to left side mat below cel, along with, “Original / WDP (Walt Disney Pictures)” in ink to bottom right. Cel measures 11″ x 7.5″ and matted in white with a gilt color frame to an overall size of 20″ x 16″. Minor scuffing to glass of frame, else cel is pristine and in fine condition. 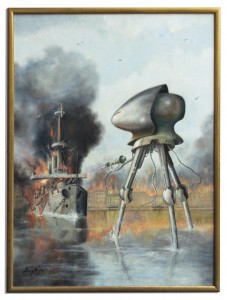 Bradbury personally owned Raymond Bayless painting, titles, “War of the Worlds, H.G. Wells”. Art depicts the famous naval battle from the first half of the story between a martian “Tripod” weapon and English ironclad, the HMS Thunder Child. Cityscape along the horizon is on fire, and the ship also goes up in flames and a cloud of black smoke, the martian chemical weapon, rises from it. Painting features an appealing color palette of predominantly light blues and greys, accented in orange, black and white. Signed, “Raymond Bayless 91,” at lower left. A sticker on verso is also signed by the artist. Oil on Masonite painting is framed to an overall size of 18.75″ x 24.75″. Near fine. 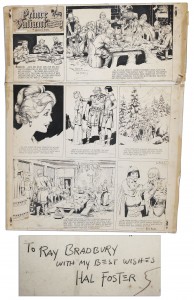 Original Hal Foster “Prince Valiant in the Days of King Arthur” seven-panel Sunday strip, twice-signed and inscribed to Bradbury. Dated 5 January 1947, strip features Prince Valiant, his wife, Aleta, Queen of the Misty Isles, and Earl Jon amid a classic Arthurian feast. True to Foster’s iconic form, strip is intricately detailed and does not employ word balloons and is instead narrated in captions positioned at the bottom of panels. Second frame is signed and inscribed, “To Ray Bradbury / With My Best Wishes / Hal Foster” and last frame is signed “Hal Foster”. With a King Features Syndicate copyright to lower edge. Strip measures 27.5″ x 34.5″ and is stapled to a backboard measuring 28″ x 44″ with significant wear to edges, including tape residue, foxing, and pencil notations to right side. Else very good. 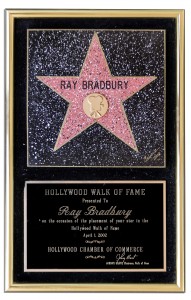 An abundance of Bradbury’s literary material has been adapted for the screen, including such classics as “Something Wicked This Way Comes”. Plaque features a miniature of the star mounted to a black velvet backing. Beneath, an engraved plaque names Bradbury and cites 1 April, 2002 as the date the star was placed at its location at 6644 Hollywood Blvd. Official Hollywood Chamber of Commerce sticker to verso. Measures 10.5″ x 16.5″. Engraved portion is detached and shows a dent to upper left corner, else near fine. 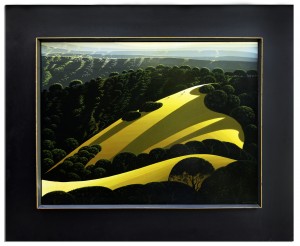 Original Eyvind Earle oil painting of a California central coast valley, personally owned by Bradbury. Earle worked as a Disney artist and was known for his background illustrations of many films and was responsible for the styling, background, and colors for “Sleeping Beauty”. Oil painting on board portrays a landscape of a California coastal mountain range in golden afternoon light, with tones in olive greens and warm yellows. Signed “Eyvind Earle / 8.12.76″ at lower right. Painting measures 41″ x 31″ and is framed in a large shadowbox-style black frame to an overall size of 54″ x 44.25”. Near fine condition.

We also have a wide assortment of other Eyvind Earle paintings, many in the mountain landscape. 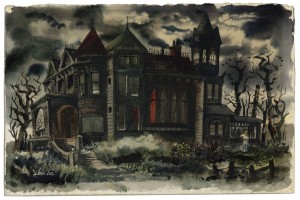 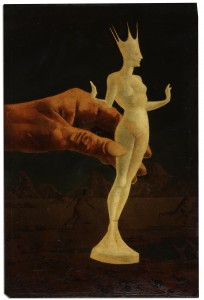 Ray Bradbury personally owned art by early sci-fi fanzine artist Hannes Bok, whose career he launched. Bradbury and Bok became acquainted in 1937. An outspoken admirer of Bok’s art, Bradbury actively promoted Bok at the first World Science Fiction Convention, and “Wierd Tales” magazine picked up the unknown artist. Painting depicts an animated-looking queen chess piece being moved by the hand of an off-canvas person. Cream-color chess piece and flesh-tone hand contrast sharply with dark brown and black background, in which a desert scape is visible with mountains on the horizon and a nude man streaking through the scene. Acrylic on illustration board painting is unsigned. Matted and framed to an overall size of 15″ x 21.5″. Near fine. 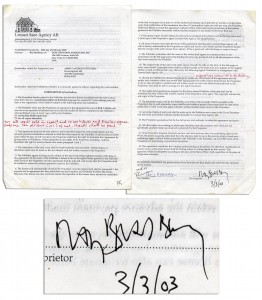 Bradbury “Fahrenheit 451” document signed. Dated 12 February 2003, typed document handles publication matters in Holland for Bradbury’s acclaimed dystopian novel. Two-page document on Lennart Sane Agency letterhead is an agreement between Bradbury and Ambro/Anthos Uitgevers of Amsterdam, providing for the publishing house to issue a Dutch language edition of “Fahrenheit…” and sell it for a 7-year term. Signed “Ray Bradbury” in black ink on verso and countersigned by a representative for the publisher. 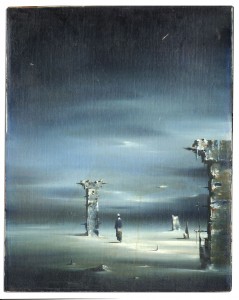 Bradbury own original Robert Watson painting titled “The Martian Chronicles”, as the artist provided the cover art for the book’s second edition, printed in 1953. Signed “R. Watson” in paint at lower left, oil on canvas painting depicts of a solitary human being, surrounded by decaying structural columns on desolate, bluish, green landscape in foreground, with a cloudy blue sky in background. With the artist’s name, painting title and “Collection of Ray Bradbury” handwritten to verso. 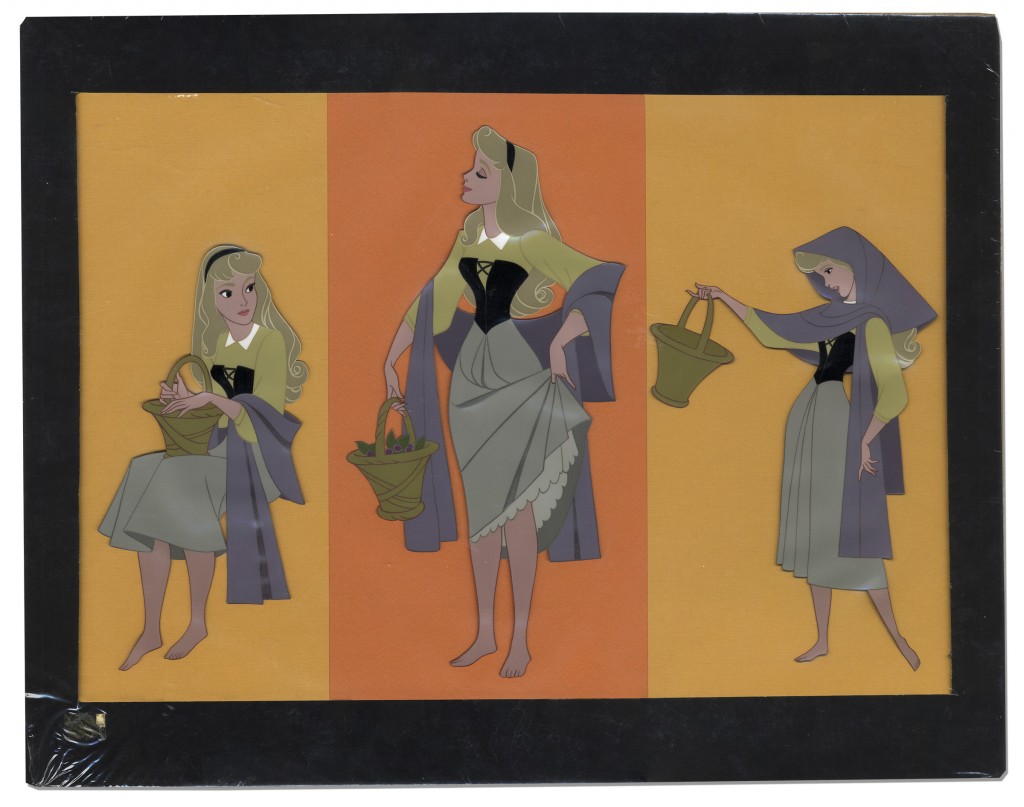 Incredibly rare and large Disney cel from the beloved 1959 film, ”Sleeping Beauty”. Cel features Princess Aurora, aka Briar Rose, as her name was changed to conceal her cursed identity during the beginning of the film. The Princess is depicted three separate times in the cel, the first posing seated, the second standing tall, and the third holding her basket outward. She wears her signature gown in each of the three almost identical depictions. Cel is matted against a tangerine and orange striped background and is framed to an overall size of 18″ x 14″. Fine condition and in original plastic.

The upcoming Ray Bradbury Estate auction will be in September of this year.  Please contact [email protected] for inquiries and to add yourself to the mailing list for this special event.